A Brief History of the Former Residence of the Ceauşescus 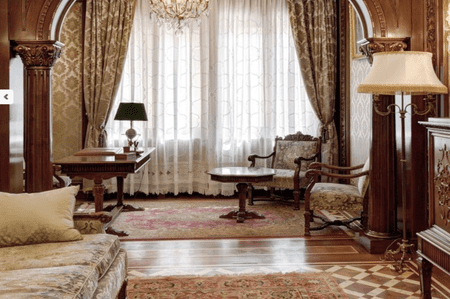 With its 80 rooms, tropical garden, swimming pool, spa and a subterranean bunker, the private residence where Nicolae and Elena Ceauşescu lived for 25 years together with their sons Nicu and Valentin and daughter Zoe is an unmissable Bucharest landmark.

Built in the mid-60s, during Nicolae Ceauşescu’s ascent to power, Palatul Primaverii (the Spring Palace), is located in the Primaverii neighborhood, which was favored by the Communist nomenklatura (key figures in the administration). Nowadays one of the richest and exclusive neighborhoods in Bucharest, it is the location of the residences of the last five Romanian presidents.

Looted in the aftermath of the December 1989 Revolution, the building was renovated and opened to the public in 2016. It surprises with its opulence, especially given that the majority of the people experienced severe scarcity of basic products during Ceauşescu’s rule. For instance, the water taps in the main bathroom decorated with golden mosaic are gilded, and needed yearly trips to the State Treasury to have the layer of gold replaced.

A host of architects worked on the residence, namely Aron Grimberg–Solari on the building, Robert Woll on the gardens and furniture, Agrippa Popescu on interiors and Nicolae Ceauşescu’s wife Elena, also had a say when it came to furnishing the rooms.

The private apartments are decorated with Murano glass and Renaissance furniture and in the style of Ludovic XVI and Ludovic XV.

Some of the highlights of the visit to Primaverii Palace are the former communist leader’s study, where he signed the historic decision to not invade Czechoslovakia in 1968, the beautifully decorated living room with a view on the interior garden, where US President Richard Nixon was welcomed during his 1969 visit to Romania, and the Louis XV day study, a copy of a room of the Palace of Versailles, where many foreign leaders stayed.

The residence’s swimming pool and the green house are decorated with brightly colored mosaic.

When visiting, you can pick from a Standard Tour and a Private Tour, which gives exclusive access to the residence’s bunker and trophy room, the portrait gallery and a view on the underground tunnel.