7 Controversial Statues in Bucharest That Everyone Hates 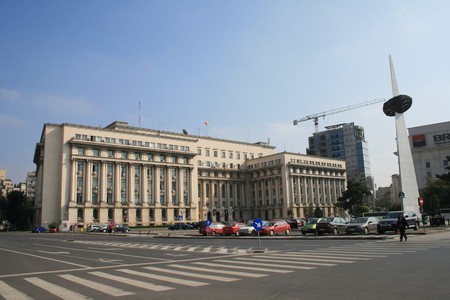 Like any big city, Bucharest has its fair share of statues that mark the country‘s past or celebrate important figures. Among these, a number have attracted criticism and mockery thanks to questionable designs and reckless spending of public funds. Here’s our pick of the most controversial statues in town.

This moniker is simply the most common, rather than the funniest, nickname of the biggest well-known monument erected to commemorate the 1989 Revolution that ousted dictator Nicolae Ceaușescu and brought down the 40-year communist rule. Others include ‘olive on a spike,’ ‘brain on a stick,’ and ‘țeapa lui Ghilduș,’ after its maker, Romanian artist Alexandru Ghilduș, where țeapă means pale, and, unsurprisingly in the country of Vlad the Impaler, ‘to be given the pale’ means to be stood up.

The monument, placed in Piața Revoluției, was meant to symbolise, according to its creator, a pyramid, elongated to show the elevation the people felt while participating in the revolution, piercing through a crown made of the thoughts and souls of those who took part. Love it or hate it, everyone in Bucharest thinks they got stood up, as the cost of the monument and surrounding ensemble cost the city budget no less than 1.5 million euros.

Made by Romanian artist Mihai Buculei, this 28-meter (92 feet)-tall monument weighs 130 tons and was in the making for over 10 years. A tribute to those who lost their lives fighting one of the most oppressive regimes in Central and Eastern Europe, it was placed in the spot where, for decades, lay a huge statue of Lenin, one of the forefathers of communism. For some, simply tearing down the huge bronze statue and leaving the base empty would have been a more powerful symbol than the heavy grey concrete wings. Also, the fact that it was funded with 3 million euros worth of public money made plenty wonder whether the authorities were not overlooking the real priorities of the big city.

Famous for their their sharp wit and self-deprecating humour, Romanians may have taken things just a tad too far with this one. But ask any passer-by about what is wrong with this statue of Emperor Trajan and the she-wolf gracing the steps of the National Museum of Romanian History, and you may just find yourself commiserating.

For those who see it for the first time, the most pressing question concerns the race of animal that is levitating in front of the Roman emperor. To Bucharest inhabitants, a city which, for years, had a large population with stray dogs, this is nothing but a grinning stray dog with a scarf. A more detached onlooker, though, will make nothing of the she-wolf with the head of a pit bull, snake tail and a snake wrapped around its neck.

What its maker, Vasile Gorduz, intended, was to combine the symbols of the she-wolf, who nursed founders of Rome Remus and Romulus and that of the dragon with a wolf head, the Dacian Draco. Secondly, many will wonder about the facial expression of Emperor Trajan. Don’t take that for granted, but in Bucharest there is a general consensus that the optimus princeps is quite embarrassed at the fact that he has to stand butt naked, stripped of his toga, on one of the city’s busiest boulevards.

Nobody knows the real name of this controversial monument, also dedicated to the victims of the Romanian revolution of 1989. To some it looks like a bunch of arms and legs, to others it shows tree trunks gathered in a bundle, while some have suggested it resembles giant macaroni.

Also called ‘the biscuit’ or ‘the drilled aspirin’, this round shaped monument is 6 meters (20 feet) tall and weighs 9 tons. Commissioned to commemorate the December 1989 revolution, it was designed by Romanian sculptor Paul Neagu. Although there is no particular reason for disliking this monument, nobody is really taken with it. Perhaps the fact that it changed places so many times already since being unveiled, has prevented it from establishing a clear identity.

This monument by Romanian artist Ionel Stoicescu celebrates the legacy of Prince Rainier III of Monaco. One of the longest ruling monarchs in Europe, he is also the creator of the International Circus Festival de Monte-Carlo. Consisting of a bronze statue of the monarch and an ensemble of circus figures, the monument was placed near Bucharest’s Globus Circus.

Apart from the fact that it cost almost 2 million euros in public funds, the statue was unwelcome in the neighbourhood from the moment the Bucharest city hall announced it would place it on the main meadow of one of the most charming parks in Bucharest, Parcul Circului. The protests that ensued made the local authorities take a step back and come up with a better suited home. The first to enjoy the new presence on the beloved park’s edge are the children, who turned into a playground, so the odds are in its favour.

This statue has not yet materialised, but there are plenty of Romanians who already hate it. As has been explained to the public, the monument, which is designed to celebrate the Great Union of 1918, hides a lot of symbolism. Ultimately though, its organic shape is intended to remind the viewer of a cupola, and was inspired by the cactus, a plant greatly admired by the monument’s creator Ioan Bolborea for its ability to endure harsh conditions. “This cupola with hundred of people holding hands is sheltering the ideal of national union that we, the Romanians living today and our descendants, mustn’t cease to protect,” he explains on his website. At a cost of around 10 million euros, many will argue the money was better spent on other priority projects rather than wasted on a 25-meter (82 feet) cactus.