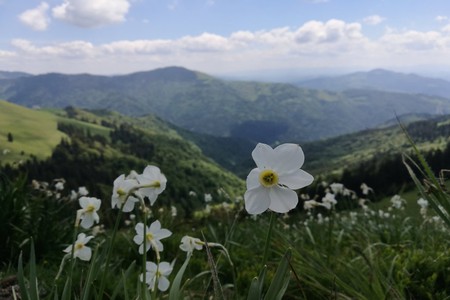 Some travel to Romania for its natural wonders and spectacular wildlife, while some are more familiar with its picturesque castles and painted monasteries. What is certain is that Romania will surprise you with the diversity of its attractions. Here are our top 20 picks.

Babele and the Sphinx

Babele and the Sphinx are natural rock formations found in the Bucegi Mountains, at an altitude of 2,216 metres (7,270 ft). Both the enigmatic Babele (the old ladies) and the Sphinx are believed to be surrounded by an energy field and many travel to see them and experience it.

Known as a religious symbol since the time of the Pelasgians, forefathers of the Greeks, the Sprinx got its anthropomorphic shape through erosion over thousands of years.

Built in the 19th century in the style of German New-Renaissance architecture, Peleș Castle features 160 luxuriously decorated rooms filled with art treasures as well as a large collection of 4,000 medieval weapons. Art lovers will delight at the prospect of seeing frescoes painted by Gustav Klimt, while history buffs will be surprised to know the palace hosted the first film projection in the country.

Today was a fairytale 🏰 #nofilter

Part of a sculptural ensemble comprising The Table of Silence and Gate of the Kiss by Constantin Brâncuși, Coloana Infinitului (The endless column) is considered one of the greatest works of twentieth-century sculpture. Made of truncated pyramids united at their base, which can be replicated endlessly, the column alludes to the infinity. The first version of the column, sculpted in oak, is displayed at the MoMA.

The mud volcanoes of Berca, Buzau county – part of the geological and botanical reservation Pâclele Mari and Pâclele Mici -are some of the most spectacular geological formations you will get to see in Romania. A walk among the active cones bubbling with mud and gas that go up to six meters (19.6 ft) in height could be the closest thing to a moonwalk.

Church
Facebook
Email
Twitter
Pinterest
Copy link
Share
Map View
The Black Church in Brașov, which got its name after the a fire blackened its walls, is the country’s main Gothic monument and the largest church between Vienna and Istanbul. Built by the German community of the city of Brașov between 1385 and 1477, it changed from a Catholic church to a Protestant Lutheran one after the Reformation.
Open In Google Maps
2 Curtea Johannes Honterus, Brașov, Județul Brașov, 500025, Romania
+40268511824
Visit Website
Give us feedback

Palace of the Parliament

Building
Facebook
Email
Twitter
Pinterest
Copy link
Share
Map View
The brainchild of former dictator Nicolae Ceaușescu, the Palace of the Parliament in Bucharest is big enough to be among the few man-made things to be spotted from space.

Its 1,100 rooms, out of which only 400 are finished and used, are distributed over 12 floors as well as eight underground levels, the last one being a nuclear bunker.
Open In Google Maps
2-4 Strada Izvor, Sector 5 București, București, Romania
+40213160300
Visit Website
Give us feedback

In spring, starting mid-May, the eastern side of the Saca Peak in Rodnei Mountains gets covered in a white fragrant carpet of daffodils stretching over five hectares. Those who have visited the Narcissus Valley, populated with thousands of Narcissus stellaris at peak season, say the sweet scent of the flowers can be felt for many kilometres around it, carried by the wind.

The fortified churches of Transylvania were built by the Transylvanian Saxons, namely German colonists brought in by the Kings of Hungary to the area, between the 13th and the 16th centuries.

The churches, featuring tall walls and defence towers similar to those of fortresses, contain many storehouses inside, designed to protect valuable goods and food during long sieges by migrating peoples.

Biertan is located in a long valley surrounded by hills and vineyards. The village was founded in 1283 and is dominated by Saint Mary’s citadel and church. Photo by Todoran Florin. #ExploreTransylvania #Transylvania #Biertan #church #UNESCO

A post shared by Explore Transylvania (@exploretransylvania.today) on Aug 9, 2017 at 2:01am PDT 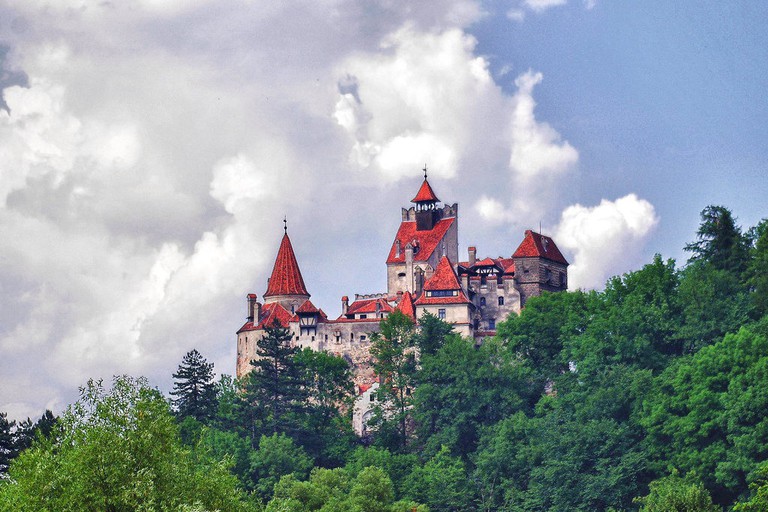 Bran Castle | © Florin73m/WikiCommons
With its red tiled roof and many irregular shaped turrets, Bran Castle is one of the most picturesque Romanian landmarks. Also known as Dracula’s castle, perched on a cliff surrounded by thick forests, the castle immediately conjures up the spectre of the Count, although, historians say, he may have never actually lived there.
Open In Google Maps
24 Strada General Traian Moșoiu, Bran, Județul Brașov, 507025, Romania
+40268237700
Visit Website
Give us feedback

Nearby the city of Cluj-Napoca, deep down in the belly of Salina Turda salt mine, at a depth of 120 meters (400 feet), lies hidden the most exciting underground attraction you may ever come across: an amusement park. Complete with a Ferris wheel, a mini golf course and rowing boats, spending time at this amusement park also brings health benefits by way of its beautiful salt lake.

What the… this amazing place is actually the world's coolest theme park, believe it or not. It used to be a salt mine from centuries back, when the mining stopped in 1932 it became a cheese storage facility then a bomb shelter during WWII.. and now in an incredible twist… the 400-foot deep Salina Turda salt mine in Romania became an underground theme park. It doesn't look like it but the rugged cave also houses a ferris wheel, bowling alley, rowboats and even a mini golf course… what d'ya say? Lets go! Awesome shot by @gforgarth . . . . . #salinaturda #turda #romania #amusementpark #saltmine #cave #discovertheroad #amazingworld #exploretheworld #travel #trip #wanderlust #travelgram #instatravel #traveling #roadtrips #travelphotography #beautifuldestinations #neverstopexploring #igtravel #instatraveling #exploremore #bucketlist #travelpics #globetrotter #visit #worldplaces #seetheworld #photography #underground

Also known as Hunyadi Castle after the man who built it, 15th century Transylvanian statesman known in Romanian as Iancu de Hunedoara, Corvin Castle is the biggest and best preserved medieval structure with military and civilian role in the country. With its high buttresses, towers and a fairytale-like drawbrige, it would not look at all out of place in a Game of Thrones episode.

After being featured in an online article a couple of years back, Bigăr Waterfall became very popular, both online and offline. Ever since, increasing numbers of tourists travel to the Cheile Nerei – Beușnița National Park to visit it, and for good reason. The water, which comes from an underground spring, falls over a large dome-shaped stone covered in emerald green moss, creating a see-through curtain of droplets.

A walk though the historic centre of Sighișoara, included by UNESCO on its World Heritage Sites list, can feel like a trip back in time. Today, it is the last remaining citadel inhabited uninterruptedly since medieval times. Vlad Țepeș, the historical figure who inspired Bram Stoker’s novel Dracula, was born here in 1431.

Sighisoara, the last inhabited citadel in Europe, was the home of the infamous leader Vlad the impaler who inspired Bram Stoker's world famous Dracula. A beautiful example of a Saxon village in Transylvania. 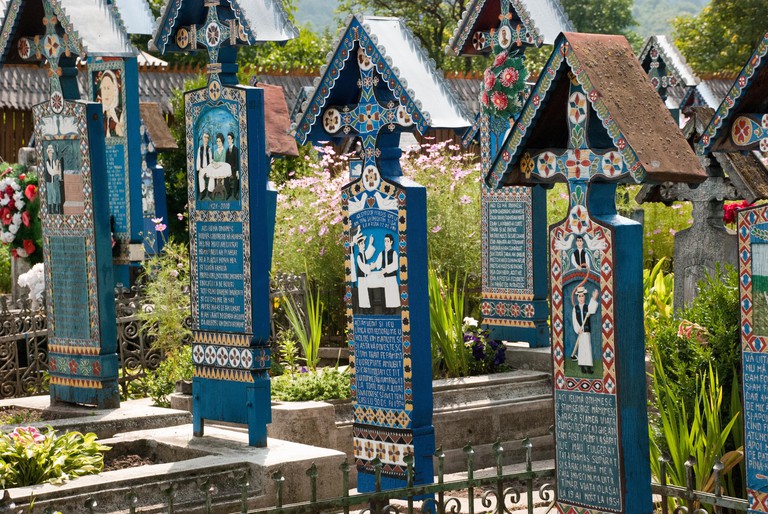 Merry Cemetery | © Remus Pereni / Flickr
The Merry Cemetery of Săpânța started in 1930, when a local craftsman decided to make one-of-a-kind hand painted crosses to celebrate life and death. Inscribed with a custom made poem about the deceased, sometimes written with an ironic or self-deprecating tone, the crosses are mesmerising due to their bright colours and ancient folk motifs, and, at the same time, stark reminders that life is by nature transient.
Open In Google Maps
Săpânța, Maramureș County, 437305, Romania
Visit Website
Give us feedback

In Moldavia, eastern Romania, the local craftsmen have used their talent to decorate churches of Romanian Orthodox monasteries with beautiful frescoes, both on the inside and on the outside. Built between the 15th and the 16th centuries by local rulers, eight of them are UNESCO’s World Heritage Sites.

#throwbackthursday Last year in June we were also on holiday, that time in my native Romania. And we visited the monastery of Voroneț, with the most famous of the painted churches in the area. The azurite blue of the exterior walls never ceases to amaze me with its intensity and beauty. I love the way it contrasts with all the whites and golds! I'm always in awe of the skill of the painters who created these murals almost five hundred years ago! 😍💗💕 #voronet #voronetblue #medievalart

Visiting in summer makes for a chilling experience, literally, as temperature inside the cave the temperature is 1 degree Celsius, at its warmest.

The Palace of Culture is Iași’s top landmark and one of the most iconic buildings in Romania. The 55 meter (180 ft) clock tower of the 19th century Gothic revival edifice is well worth a climb, as it offers splendid views over the city, the capital of the historic region of Moldavia, and the four museums it hosts are not to be missed.

Home to over 300 species of birds and 160 species of fish, the Danube Delta is the second largest river delta and best preserved in Europe. Reachable by boat only, it is a genuine oasis of tranquility where the sound of traffic is replaced by that of waves by day and crickets by night.

The picturesque Râșnov Citadel, found near Brașov, was built by locals in nearby villages to defend themselves from attacks by migrating peoples. As the sieges started to take longer and longer, they built dwellings and settled inside, after digging through stonean 146 metres deep well.

Up in the Orăștie Mountains, at 1,200 meters (3937 ft) altitude, the forefathers of the Romanian people, the ancient Dacian people, built Sarmizegetusa Regia as their military, administrative and religious centre. The complex, a World Heritage Site, includes six citadels, temples and civilian dwellings built on terraces and a fortress spread over 30,000 square meters.