13 Craft Beers You Must Try in Romania 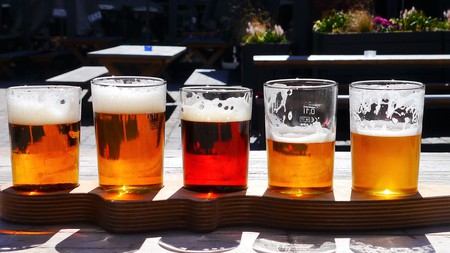 Craft beer is becoming more and more popular in Romania as new microbreweries, brewpubs and craft beer shops and bars open. While big brewing companies such as Ursus, Tuborg, Ciucas and Timisoreana have been present for a while on the Romanian market, the desire to create local, authentic beer, produced in microbreweries for local consumption, gave birth to a Romanian craft beer revolution, as the beer enthusiast from Beerologique calls it. If you love beer, these craft beers are not to be missed. And if you think you don’t like beer, just taste these amazing examples and you’ll start loving it!

Produced by an independent Romanian micro-brewery, Zăganu is an unpasteurised beer, manually bottled and labelled. Made near the Zăganu Mountains with just water, malt, hops and yeast, Zăganu Beer is one of the best craft beers in Romania. You can taste the Zăganu beers in the Romanian Craft Beer Bar in Bucharest. If you are not in Bucharest, you can find all the locations where you can enjoy Zăganu Beer on the brewery’s website, and you can also buy it mail-order, to drink at home. Choose between the Blonde Beer type Pale Lager, the Dark Beer in Schwarzbier style, the Zaganu Rosie, a Belgian Red Ale beer with fruity and spicy notes, or the Zaganu India Pale Ale for a strong bitter taste.

The first craft brewery in Romania, Hophead Brewing offers a wide range of excellent beers, including some seasonal special treats, all produced in their micro-brewery. Putting great passion into their work and creating a finely-brewed beer with a heavy taste and a rich flavour, the team at Hophead Brewing conceived a great variety of craft beers with fantastic aromas. Try the Hophead Vișine, a fruity beer with cherry flavour, the Hophead Grozavă, a seasonal beer with raspberry flavour or the Hophead Opium, a fruity Indian Pale Ale (IPA). If you like brown beer, go for a NEBRună După Tine, served as an Indian Brown Ale or a Brown IPA. All the places where you can find their beers are on their Facebook page.

Hophead Breweryin the outskirts of Cluj are producing some cutting edge beerfuss just a shame they have no tap or licence to consume the beer on the premises.

One of the best craft breweries in the country and the one that launched the first American Indian Pale Ale produced in Romania, Ground Zero brews an amazing beer. Unfiltered and unpasteurised, the Ground Zero Beer is 100% natural. While a wide range of beers are produced in the micro-brewery, there are some types that you just can’t pass up: the Morning Glory, first Romanian IPA, boasting an out-of-the-ordinary grapefruit, citrus, hints of mango and tropical fruits flavours and the Imperial F**k, an Imperial IPA, one of the most hardcore beers in Romania.

The only brewpub in Cluj-Napoca serves some fabulous craft beers and delicious food. At Klausen Burger, you can ask for an Arrogant Beer (an Indian Pale Ale), Indigen Beer (a great Blonde Beer), a Gorun Beer if you like your beer dark, a Corvus Beer if you prefer unfiltered beer or a Red Revolution if you fancy a fruity-flavoured choice. Or why not try them all?

The beer produced by the Hop Hooligans Brewery is about flavourful and unique craft beer. With a wide range of different products, once you’ve tasted their beer, you’ll be coming back for more! Enjoy a Summer Punch (a super-fruity American Pale Ale), watch the Night Light’s (a Black India Pale Ale), meet the Emperor (a Mango Wheat Ale), try a Royal Execution (an English Special Bitter) or dare to try a Chupacabra – a Spiced Stout flavoured with cocoa nibs, coffee, cinnamon, vanilla beans, nutmeg and habanero peppers. Find the map on their website that will take you on a great experience filled with extraordinary craft beers.

We managed to trap Koschei in a bottle. Soon in most of the HH locations.

A Nemteana Beer can be defined as a traditional, old-style beer born in the Neamt County. Made only with malt, barley, pure water, hops and beer yeast, Nemteana Beer has a pleasant hop taste and a bitter flavour; simple yet authentic. The little Nemteana brewery crafts two types of beer: Amber Beer, a fermented craft beer with caramel flavours and a bitter aftertaste and Unfiltered Beer. You can find the bottles in Lidl shops, in the RomBeer bar in Bucharest or Fika Bar in Iasi. Follow their Facebook page for more locations.

A new brewery in Bucharest, Three Happy Brewers produces ‘fresh, pure, true-to-craft beer, recreating rare styles, our own reinterpretations of classics, and some weirder things’. After travelling around the world, three beer-aficionados met and had the idea of bringing something unique to the local beer market of Romania. So here you have it, a beer brewed in Bucharest with exotic flavours. Taste the West-Coast IPA with a fruity hop aroma, the Australian Pale Ale, boasting a tropical fruit aroma, the Czech Pilsner, a classic one, the English Amber, with a pronounced bitterness or a Belgian Enkel, with a hint of floral and spicy notes.

Yet another beer brewed in Bucharest, Sikaru Beer has a variety of ales, from the Blonde Beer with citrus flowers and coriander flavour to the Red Beer (an English IPA), and the White Beer (a Belgian-style beer with a slightly citrus aroma), to the Black Beer – a Stout with hints of coffee, chocolate and cacao. Unfiltered, unpasteurised, matured and naturally carbonated, Sikaru Beer is a delight for beer-lovers. Check out their Facebook page to see where can you find it.

A Transylvanian beer with a magnificent taste, this is a must-try for all lovers of beer. A 100% natural unfiltered lager beer produced in the first micro-brewery that crafted unfiltered beer. Using a centuries-old German recipe, with long-lasting fermentation and natural ingredients, Lăpușna Beer is produced as a Blonde Lager and a Red Lager, which has extra aromas of caramelised malt.

Produced on a small scale in a local micro-brewery in Timiș County, Sara Beer is a traditional, homemade beer with a unique taste. Both Blonde Beer and Brown Beer are fully-flavoured and can be found in Timișoara and in some other locations around the country or bought directly from the beer’s website.

The first craft brewery based in Iași brews Belgian-style beers for the delight of locals and tourists alike. There are five beer types to delight your taste buds: Capra Noastră 1, a White Beer with flowers and spices savour, Capra Noastră 2, a Brown Beer with sweet aromas of caramel and chocolate, Capra Noastră 3, an Ale-type beer with an intense hops aroma, Capra Noastră 4, Saison Beer with a seasoning of exotic fruits and a slightly spicy taste and Capra Noastră 5, an IPA brewed in Belgian style with an aftertaste of caramel and freshly baked bread. Which one will you choose?

One of the first craft breweries to emerge onto the Romanian market, Clinica de Bere (translated as ‘the Beer Clinic’) produces exclusively for the local market of ‘therapy beers’. Fresh, unpasteurised, unfiltered and preservative-free beers produced with ingredients from Germany, their beer is just wonderful. You can choose from the Terapia Gold, a blonde beer, Terapia Platin, a white beer, Terapia Citrin, an IPA beer and Terapia Rubin, a strong Amber Ale type. Order your beer online or check out the website to discover where can sample it.

In the city of Constanța, a tiny craft brewery produces an unfiltered, unpasteurised beer mixing Romanian malt, German hops and Belgian yeast. Choose from a ‘multicultural’ lager beer called a Craft Browny (an Amber Ale mixing a bitter taste with caramel touches), a Cazino Craft IPL (a mix of a lager beer and an IPA), and the fully-flavoured Cazino Craft (a classic lager beer). Check out where can you find their great beers on their website.