12 Romanian Phrases You Need to Know 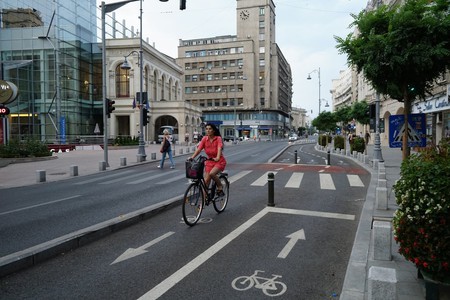 Generally most young Romanians speak excellent English, especially in the largest cities. However, a few words of Romanian and the willingness to use them will enhance your experience tenfold. Here is our list of 12 phrases you should learn before traveling to Romania.

Unlike all other Romance languages, Romanian has taken the word ‘Da’ from the surrounding Slavic peoples, one of the most significant influences that always seems to confuse people. Da means yes and Nu means no. Nu is often accompanied with a vigorous shake of the head from right to left, sometimes even mirrored by that of the index finger.

The Romanian word for ‘thank you’ is mulţumesc – pronounced ‘mul-tsu-mesk’ – which takes longer to pronounce than shaking a hand or giving a kiss of gratefulness. The very polite version for ‘thank you very much’ is mulţumesc frumos, an even longer expression! Do as the Romanians do and say Mersi – from the French ‘merci’ – and you’ll be just fine.

Pronounced ‘ku pla-tsce-re,’ the literal translation is ‘with pleasure’. It is the most common way to respond to someone giving thanks. Pentru puțin (pronounced ‘pen-tru putsin’) is also used, meaning ‘for little.’ A more accurate translation would be ‘don’t mention it’.

‘No, thank you’ is the most appropriate and speedy way to turn down an offer or invitation without hurting anyone’s feelings. Although an explanation is usually expected in formal situations, this phrase alone will suffice for foreigners.

This is how Romanians say ‘please’. While the first version is used with those you are already acquainted with, the latter is reserved for shop sellers, elderly people and just about anyone who you haven’t been introduced to yet.

Both are a means of an apology but the first is casual, while the second is the formal version. The phrase is also used when asking for permission to move past someone, be it through a busy square, street or on public transport.

Both Salut and Bună are used to greet friends, family and acquaintances. Think of it like the word ‘Ciao’ in Italian.

Bună, ce faci is perhaps the most common greeting in all of Romania, so if you master that you will always be able to put a smile on someone’s face.

Bine means ‘fine’ and if you happen to be feeling particularly good, you can let others know by saying Foarte bine, meaning ‘very well’.

Rather similar to the Italian ‘arrivederci,’ la revedere is frequently used for saying goodbye. The most common answer is simply ‘la revedere’ right back or ‘pa pa’ for short.

A super cute expression! pupici meaning ‘little kisses’ is a very colloquial term, used to greet loved ones and those we feel close to.