10 Contemporary Romanian Designers You Should Know 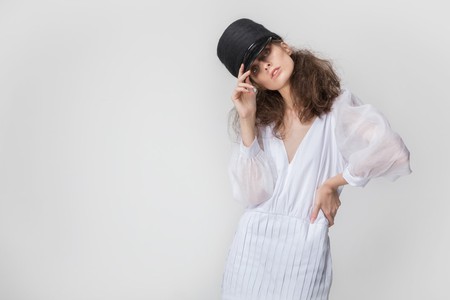 The Romanian fashion design scene is bursting with originality, as well as having the feeling that ‘the time is now’ to be creative, unrepentant yet sensitive and, whatever you do, always be in touch with your true self. We’ve listed ten contemporary Romanian designers you should know right now.

Murmur takes inspiration from vintage lingerie and reinterprets it in order to create bold and ultra feminine silhouettes that can be worn both by day and after dark. In order to achieve this, Andreea Bădală experiments with bondage strappings, hand-crafted bra cups and complex detailing. Having studied in London, the designer later gained work experience at Alexander McQueen menswear brand and Richard Nicoll.

Indulging in the preps for the NYE and the Prison Gloves will be completing every outfit. #murmurclothing #murmur #murmurroleplay #nyeoutfit #nye

Boasting a PhD in Arts and Fashion obtained in London, Bucharest-based Lana Dumitru is a designer whose clothes are equally at home in a gallery, a museum or high street store. A creator of ‘wearable opinions’, she uses digital techniques to bring to life her vision and transform it into strong and unique conceptual pieces. With 12 collections already to her name, her work has been showcased by museums around the world, such as Horniman Museum London, Malmö Design Centre and at various fashion weeks and events.

WE LOVE: The high-tech @foraeva_studio dress, fashioned from over 25,000 @Swarovski Crystals. Created with the help of 3D simulations, algorithmic design methods, and digital prototyping, the creation from fashion designer @lanadumitru and architect @vladtenu is an absolute showstopper. #NirvanaLoves #foraeva

Chic Utility militates for consistency and authenticity in a trade where designers are called on the be absolutely brilliant not just twice a year, but, for the sake of consumerism, even more than ten times a year. That is why this creative collective places a strong emphasis on the inextricable connection between idea, functionality and shape, creating pieces that are bold and always put you out there.

Need ideas for last minute X-mas #designer #presents? Check out the cool selection of Romanian Designers on #MoleculeF, including some of our best #Graduates, on their own platform & in the Promenada Concept Store. ❄️💡📘🔝 #ChicUtility @moleculef

Inspired by the desire to build a bridge and create a fusion between traditional clothing and folk costumes from around the world, Andra Clitan came up with MA RA MI. Having studied in Cluj and later at Central Saint Martins, she drew inspiration from her Transylvanian childhood and travel or study trips in Asia, the Middle East and Europe. Apart from making exquisite clothes, MA RA MI creates a space of dialogue and is a repository of traditional techniques and motifs from around the globe.

Need ideas for last minute X-mas #designer #presents? Check out the cool selection of Romanian Designers on #MoleculeF, including some of our best #Graduates, on their own platform & in the Promenada Concept Store. ❄️💡📘🔝 #MaRaMi @moleculef

Hailing from Cluj-Napoca, Manghiuc Ramona created her brand out of the need to do something different. However, it is a story about imperfection in a world dominated by perfection. Fashion magazines, advertising and TV all hail perfection, that is why, the designer makes clothes for those who celebrate their imperfections as unique and would rather be authentic than perfect.

Having studied in Timișoara, Adina Orboi brings a fresh take on femininity by exploring it through the most original of juxtapositions. She projects it on men, in order to better highlight it and invites them to become aware of their sensibility and, as she puts it, ‘expire femininity’. Her clothes aim to contribute to thought construction and to achieve unity through duality.

A project created by Bucharest designers Emilia Tudoran and Iulia Ghenea, IE sets out to reinvent traditional Romanian women’s clothing by studying its shape and structure, as well as daily and festive clothes accessories. The result is an emphasis on reinterpreting the existing shapes in order to create new structures.

A post shared by Revista Civilizatia (@revistacivilizatia) on Dec 1, 2016 at 9:06am PST

Another successful alumnus of the Cluj-Napoca design school, Crina Bulprich refined her craft in Milan, where she interned for Lucio Vanotti, and has developed an aesthetic built around the motto ‘less is more’. Her creations are very wearable, a play between well-constructed volumes, high-quality organic materials, strong chromatics and functionality.

DBOL, or Design By Oana Lupas, defines itself as a small, vertically integrated fashion label created by designer Oana Lupaş. After completing her studies in Cluj-Napoca, she opened her first store in the heart of the city, where you can find clothes that push you to move beyond the conventional, with highly customisable pieces that can be worn from day to night. Focusing on designing clothes characterised by clean shapes and minimalism, she nonetheless loves to surprise with unexpected touches such as handmade embroidery.