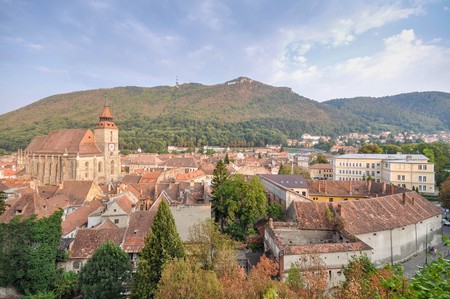 The second-most visited city after Bucharest, Brașov, has a picturesque old centre, a lively restaurant scene, one of the most famous ski slopes in the country and a well-known sign that conjures thoughts of Hollywood’s famous one. Here are the best attractions to check out on your visit to Brașov.

The most important landmark of the city, Piața Sfatului, or Council Square, has been the heart of the city for over 500 years. Annual markets have been held here since 1364, a time the square may have witnessed a few executions and witch trials. Today, it hosts all major fairs as well as concerts and rallies and is a popular place for strolling. Surrounded by beautifully preserved historic buildings, with the Council House being the most iconic one, the square is a great spot to grab lunch at the nearby cafés and restaurants.

Towering over the city skyline, Biserica Neagră is the main Gothic monument in the country and considered the largest church between Vienna and Istanbul.

Built by the German community of the city of Brașov between 1385 and 1477, it changed from a Catholic church to a Protestant Lutheran one after the Reformation. With a length of 89 meters, a width of 38 meters and featuring a 65-meter-tall bell tower, the church got its name from the charred appearance of its walls, which were blackened during the Great Fire of 1689.

Tâmpa Mountain rises over 400 meters above the city, putting its distinctive mark on the city landscape. Apart from offering stunning views over the city, it is also home to a valuable nature reserve due to the presence of numerous species of animals, plants and insects. The mountain is perfect for butterfly spotting, because it offers the perfect habitat to over 35 percent of Romanian butterfly species. Not least, Tâmpa is the site of one of the city’s most recognisable symbols, the Hollywood-inspired Brașov sign.

Home to one of the best and most popular sky slopes in the Carpathians, Poiana Brașov is a mountain resort that attracts winter sports lovers from around the world. Easily reachable by road, it sits at an elevation of around 1,000 meters and offers 80 hectares of ski area and a 23,9 kilometre-long slope. If visiting in winter, make sure to put aside one day to spend skiing or snowboarding and an evening to enjoy the lively vibe of the bars and terraces located at the foot of the slope.

Despite its off-putting name (Ceasu’ Rau roughly translates as bad omen), the restaurant features some of the most delicious traditional Romanian food. Here, you can sample sarmale, sausages and numerous pork dishes as well as long simmered stews and sauerkraut-based dishes, a staple of Romanian cuisine. Make sure you save some space for dessert; they make terrific papanaşi.

The 16th access gate to the old medieval town of Brașov, Catherine’s Gate is one of the most picturesque medieval edifices still standing. Between the 13th and 17th centuries, when the city was ruled by German Saxons, the native Romanian inhabitants, who were not allowed to purchase property inside city walls, were only allowed to use Catherine’s Gate to enter the city after paying a toll. Today, the building hosts a museum.

Catherine Gate, in Brașov. The five-spire design warns medieval visitors that the death penalty will be applied for even minor crimes. It's also the gate that native Romanians used for centuries to commute for work while the German occupiers banned all non-Germans from owning property within the city. #romanianhistory #poartaecaterinei #themoreyouknow #itsabeautifulbuildingthough #architectureasthreat

Today, a popular medieval attraction, Cetățuia Brașovului has a rich past, starting with the 15th century as an important defence site. The current edifice, featuring four bastions, dates from the 17th century. Previous structures built here, which did not withstand sieges and fires, served as warehouses and a prison. Perched high up on Dealul Cetății, it features between its walls an 81-meter deep water well, a remarkable feat achieved in the 17th century. The fortress can be visited everyday, between 9 a.m. and 7 p.m.

Bears have always had a special place in Romanian folk culture as the symbol of strength and courage in the face of adversity. However, bringing these magnificent animals close to people has always been ingrained in popular culture. The Libearty Bear Sanctuary was created at the end of the ’90s, when a passerby decided to take steps to end the exploitation of bears for entertainment. Covering 70 hectares of oak and hazel forest, the sanctuary has become the home of over 70 rescued bears.

It takes only an hour of driving to get from Brașov to the foot of the Piatra Craiului Mountains, some of the most beautiful in the Carpathian Mountain range. The pristine natural landscapes are elevated by the presence of numerous species of plants, such as Garofița Pietrei Craiului, a miniature carnation endemic to the massif. The highest peak, La Om, measures 2,238 meters. Very popular with hikers, the mountains are dotted with refuges and lodges perfect for overnight stays.

Church
Facebook
Email
Twitter
Pinterest
Copy link
Share
Map View
A true gateway to Transylvanian culture, Brașov has in its vicinity a UNESCO World Heritage Site, namely the Prejmer fortified church. First mentioned in 13th century documents, Prejmer was always the first settlement in Transylvania to be targeted by the Ottoman Turks coming through the Buzău passage. That is why, the church was fortified to withstand sieges. Today, the Prejmer fortified church is the best-preserved such edifice in Eastern Europe.
Open In Google Maps
2 Strada Mare, Prejmer, Județul Brașov, 507165, Romania
+40268362052
Give us feedback
Give us feedback