The Most Scenic Cycling Routes in Lisbon 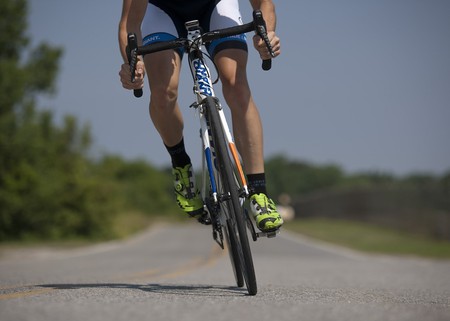 Lisbon has pumped millions into improving its cycling lanes, which offer a relatively safe and easy way to see the city and beyond. There are plenty of hire shops and also electric-assisted bikes to rent (using apps like Jump). Here are some of the best cycle routes to experience another side of Lisbon.

Anyone who has taken a walk around Lisbon will tell you it’s a city of steep hills and slippery pavements, but that doesn’t mean it’s to be avoided by cyclists – far from it. Whether you want to skirt the flats on the banks of the Tagus River or venture to the peaks of Sintra, there are plenty of options for getting to know the Lisbon area on two wheels and some reliable cycle paths to get you there. Here are a few of the best.

Let the Tagus take you for a ride

If you only take on one cycling trip during your stay in Lisbon, take this one. Not only does it give you an excellent introduction to the city’s waterfront highlights, it’s also flat with dedicated cycle paths. This 17-kilometre (10-mile) stretch along the Tagus River is a good day trip, allowing you to pass through the Praça do Comércio, under the humming 25 April Bridge and past numerous restaurants, cafés and bars, the MAAT museum and more. You finish at Belém tower, where you can relax on the grass with a cold drink from a vendor and a pastel de nata from the famous Pastéis de Belém.

For the full route, start at the trendy Parque das Nacões, where there are also several bike hire shops, and follow the river south. Be careful of others on the way – you’ll be sharing the cycle paths with unpredictable electric scooter riders as well as wandering pedestrians. 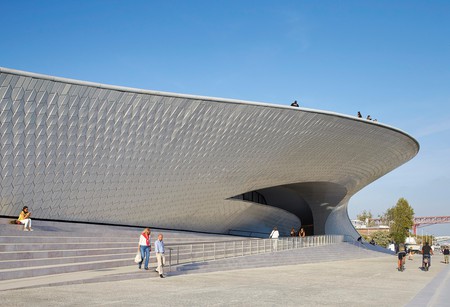 The ‘green corridor’ from city to Monsanto Park

This route begins with an incredible view of Lisbon from the top of Eduardo VII Park and what is said to be the largest Portuguese flag in the country, leading to the 10 square kilometres (6.2 square miles) of thick foliage in Monsanto Forest Park. The connecting Green Corridor was only finished in 2017, and allows you to travel to the forest from the urban centre across 2.3km (1.4mi) of cycle path. The woodlands themselves feature 42km (26mi) of bike-friendly pathways, making this a good spot to explore on pedal-powered wheels.

Start at the northwest point of Eduardo VII and ride across the recently built wooden bridge, following the path to the forest park. Monsanto itself includes a wide variety of routes, some of which are recommended for mountain bikes. It can feel maze-like at times, so it might be worth bringing a map. 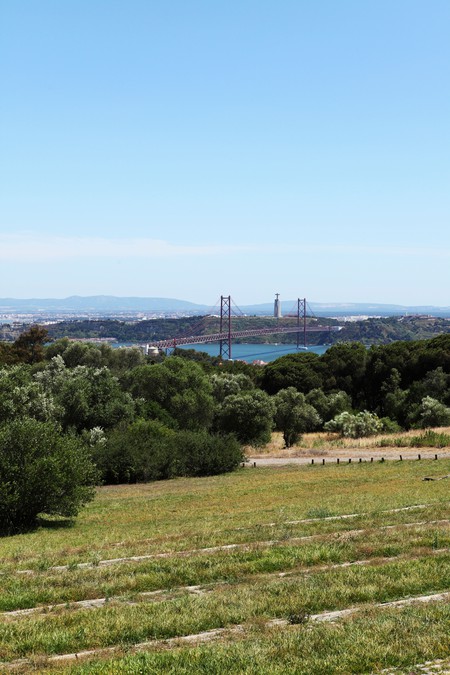 A short train ride west from Lisbon will take cyclists along the coast to Cascais, a beautiful and charmingly upscale resort town sandwiched between beaches and brightened with a nautical style. Here, cyclists have a 10km (6mi) pathway that heads to Guincho Beach (on the outskirts of the Sintra Mountains) and back, primarily alongside the coast. During the summer, cycling is one of the most accessible ways to reach Guincho Beach since public transportation is limited as are parking lots, and the path provides a scenic activity for the fall, winter and spring. One of the best parts of this route is the free bike rentals in Cascais. 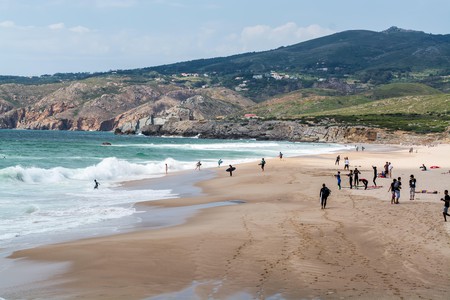 Cross the Tagus for beaches and fish in Costa da Caparica

This journey has the added bonus of a ferry ride across the Tagus, and takes you to lesser-known (but not unpopular) Costa da Caparica beach south of the river – around a 5km (3mi) ride away. This sandy, sometimes quiet and often windy seaside location can feel a world away from the hectic capital and is a solid bet for cyclists, sunbathers and surfers alike. Try making time for grilled fish and a glass of wine in the sleepy fishing town of Trafaria before getting the ferry back.

The ferry leaves regularly from the port of Belém (near MAAT) and costs less than a Metro trip (use your Viva Viagem card). You can take your bike on the boat. The cycle path runs southwest from Trafaria alongside the main road and is well signposted. Be sure to check ferry times in advance, and don’t end up stranded – there’s no cycling back over the bridge (really – don’t try). 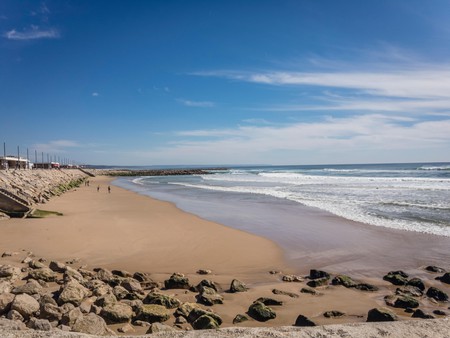 Meet the ocean from Cascais to Guincho

The Atlantic coastline from Cascais to Guincho Beach hugs the coast along reliable cycle paths. You will pass by the Guia and Cabo Raso lighthouses, look onward to the Sintra mountains and find plenty of ocean viewpoints on the way. The route is around 10km (6mi) each way, and is relatively easy going (be careful of the Atlantic winds, though).

Start off by getting the train to Cascais from Cais do Sodré (you can bring your bike for free), and then follow the N247 road’s cycle path west and then north along the coast. A great bonus to this route is that Cascais council offers hire bikes by the day for free. They have a rental location opposite Cascais station. The bikes aren’t the best in the world, but you can’t argue with the price. 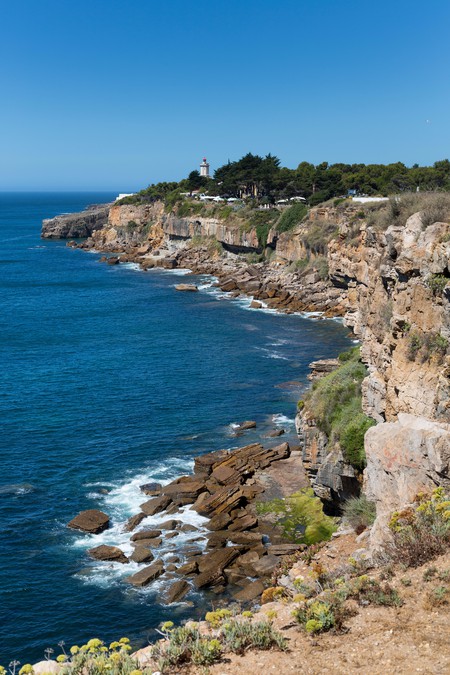 Sintra is an area of hilltop forts, making cycling a challenge on many of its routes. There are plenty of companies offering mountain bike tours of the mountainous forests, though, and they are a good way to stay safe and avoid getting lost as you navigate the diverse forests of everything from pine trees to cacti.

Get the train to Sintra from Rossio station. The 45-minute journey costs as little as €2.25 (£1.90) for a single journey. Once there, go to a company like Go2Sintra or Cycling Rentals to arrange a tour. Some of the best routes are on unmarked dirt tracks, and of various degrees of difficulty, which is why paying for a tour can be worth the money. 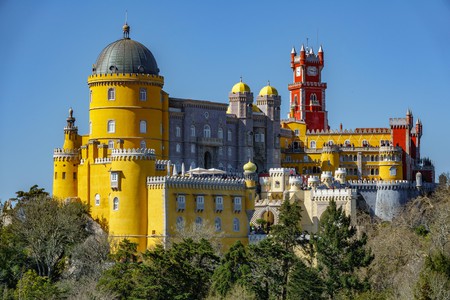 Sintra has many hills, like the one on which Palácio da Pena sits | © Francisco de Casa / Alamy Stock Photo

A Campo Grande day out to the Tagus River

This simple ride down through the city takes in a lot of Lisbon sights on an easy-to-follow route from the tranquil Jardim Mário Soares at Campo Grande, following main roads down to Praça do Comércio on the Tagus River.

You might want to make a circuit or two around the grass and boating lake of Jardim Mário Soares before heading south along the cycle path beside Avenida da República. You will pass the old bullfighting ring (now multiplex cinema) of Campo Pequeno and the shops and cafés of Saldanha before swinging southwest down Avenida Fontes Pereira de Melo to the Marquês de Pombal roundabout. From there, follow the Avenida da Liberdade south through Praça Dom Pedro IV and down the road on Rua da Prata (be careful of trams and cars). You end up in the historic open space of Praça do Comércio overlooking the river. 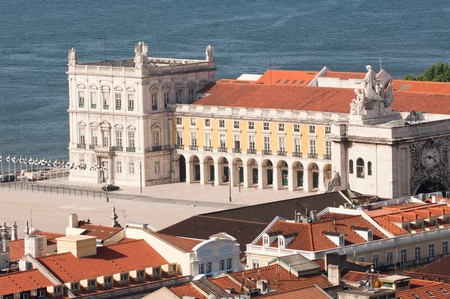 Opened in 2018, this addition to the city shows how seriously the authorities want to bring a splash of greenery to Lisbon. Parque Urbano Vale da Montanha (Mountain Valley Urban Park) was opened on World Tree Day and features cycle paths, playgrounds and, of course, a kiosk for a quick imperial after pushing those pedals. This 11-hectare (27-acre) pocket of fresh air and forestry is a cyclist’s delight. It may not take you anywhere, but it’s good for burning some calories and getting some ecotherapy in the heart of the city. It will eventually form part of the 15ha (123ac) East Green Corridor Project.

Parque Urbano Vale da Montanha is just west of the Bela Vista metro station and near Parque da Bela Vista. It is around 5km (3mi) west of the Tagus, meaning that you can always link it to a longer trip along the river if you want to go the extra mile.

This article is an updated version of a story created by Patrick Ward.