A Walking Tour of Alfama, Lisbon 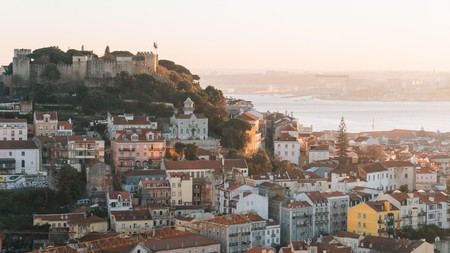 As the only neighbourhood to have survived Lisbon’s devastating 1755 earthquake, Alfama is the historic heart of the city and getting lost in its labyrinthine cobbled streets is a wonderful way to explore it. With extra local insight from Katrina Brinckerhoff, who heads up the Lisbon team at Eating Europe walking tours, here’s our guide to walking this characterful part of town.

Be prepared: Alfama’s streets are steep. Walking up them is hot, thirsty work in the strong Portuguese sun, and walking down them is treacherous in anything other than flat shoes. Make like the locals and wear trainers, and make sure there’s some grip as the distinctive calçada pavements are notoriously slippery as well as steep. 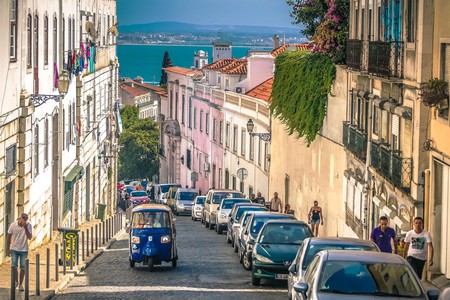 While noisy tuk-tuks and electric bikes can take the legwork out of exploring this area, it’s much to the chagrin of locals, and by zipping around the place you’re going to miss out on much of the charm. Come in appropriate footwear and allow plenty of time to follow your curiosity down narrow alleyways and to refuel and recuperate at the many lovely miradouras (viewpoints) that reward every steep climb.

Take plenty of cash, as Multibancos (ATMs) are few and far between in the heart of Alfama, and some places are cash-only or will only take Portuguese cards.

Be prepared to backtrack, and don’t be too rigid about sticking to a set agenda, as it will likely lead to frustration. And remember if you do lose your bearings, just head down in the direction of the river: all roads eventually lead down to the Baixa (downtown). 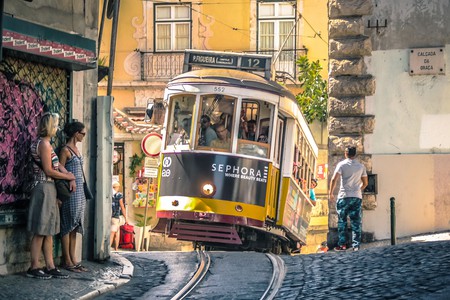 Get that fado feeling

There are several ways to reach Alfama on foot from downtown Lisbon, but our suggestion is to jump off the metro at Martim Moniz square and make the ascent through Mouraria, the old Moorish quarter. Alfama is synonymous with fado, the soul-stirring vocals-and-guitar musical style that captures the essence of saudade (a Portuguese word famously hard to translate, but which is something akin to a bittersweet longing for something or someone).

At the entrance to Mouraria, you’ll pass by a large sculpture of the distinctive fado guitar, before following a rustic beco (alleyway) lined with photographs of famous fado singers: it’s a permanent outdoor art installation curated by British photographer and long-term Lisbon resident Camilla Watson.

Follow the line of portraits through the neighborhood and up to Alfama, and as you pass along Rua da Guia, look up high for red Chinese lanterns: these often signify that clandestine Chinese restaurants (the semi-legal establishments known locally as clandestinos) are operating inside unassuming apartment buildings. 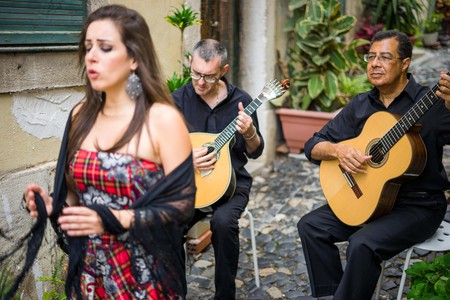 One of the many charms of Alfama is its seamless blending of the historical with the contemporary. A 10-minute stroll will take you to Calçada do Menino Deus, where internationally-renowned Lisbon street artist Vhils has used the traditional calçada decorative tiling technique to create a mural depicting fado icon Amália Rodrigues (1920-1999). 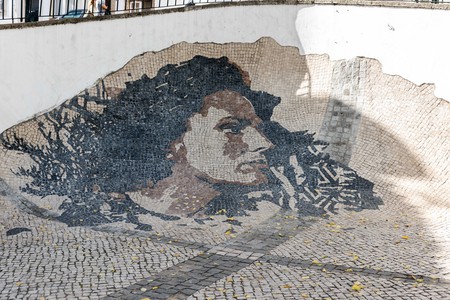 Check out the castle

Follow the cobbled streets for five minutes in the direction of the Castelo de São Jorge, the 11th-century Moorish castle that sits high above Mouraria and Martim Moniz. If time allows, the €10 entry fee is worth it for the chance to poke around the storied old building – wander around the ramparts and take in the staggering views over red roofs of Alfama. There’s a café inside the grounds, but you’ll find better value coffee and cakes outside the castle walls, so it’s worth making a pit stop before you go in.

If you’re arriving around lunchtime, Chapitô, on the Costa do Castelo, is a worthy lunch spot: it’s a renowned circus school and unique social project teaching circus skills to socially vulnerable people. The on-site restaurant Chapitô à Mesa has stunning panoramic views over the city and across the Tagus, as well as artfully plated fish, meat and seafood dishes from chef Bertílio Gomes. 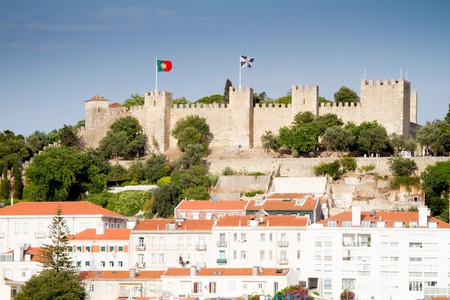 Take in the views from a miradouro

Alfama’s lofty location saved the neighbourhood from the devastation of the 1755 earthquake, and also lends it some of the best views in the City of Seven Hills. Lisboetas love to nurse a coffee or cocktail at a miradouro (viewpoint), and one of the best examples is at Portas do Sol. It’s around a seven-minute walk from the castle (backtracking a little along Rua de Menino Deus). Along the way you’ll find a sunny esplanade with panoramic views, artists selling their wares and, very often, musicians playing anything from fado to Angolan kizomba or Brazilian samba. Look out for a colourful mural on a staircase next to the square, which depicts the history of Portugal in comic book form.

If you’re in need of a little liquid refreshment, it might be time to try the local speciality ginjinha (wild cherry liqueur). Katrina Brinckerhoff of Eating Europe’s Lisbon walking tours, says: “If you’re lucky, on that same staircase below the mural you can find Dora, a local who sells ginjinha outside her home. According to Portuguese grandparents, ginjinha will cure any ailment as long as you drink it in the correct dosage: five shots a day for women and seven shots a day for men.” 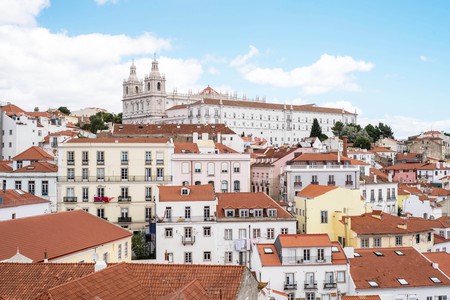 Get to know the locals

The cobbled streets between Portas do Sol and the Chafariz de Dentro (a lively public square a five-minute walk away, and home to the Fado Museum) are fun to wander up and down, each alleyway offering up an intriguing small shop, café or bar. Although the tourist boom and ‘Airbnb effect’ have sadly priced large swathes of the population out of the area, many people have lived here for generations, and can be seen surveying the street scene from upper floor windows as their washing flaps from lines strung up below. As you wander, look out for the black and white images of local residents printed onto the walls. Another project from Camilla Watson, this is the Alma de Alfama project, now in its second edition, which celebrates the locals who live and work in this characterful neighbourhood. 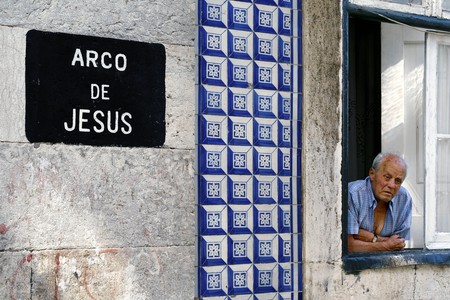 Partake in the fun of the feira

From Chafariz do Dentro or Portas do Sol, it’s worth taking the 10-minute walk to the impressive 17th-century National Pantheon, which is the burial place of fado queen Amalia Rodrigues, among other notable historical figures. If you’re in town on a Tuesday or Saturday, be sure to check out the famous flea market that takes place at the neighboring Campo da Santa Clara. As Katarina explains: “It’s known as the ‘thieves market” because if you’re unlucky enough to get pickpocketed, you will most likely be able to find your phone, laptop or empty wallet there. However, there are many vendors selling beautiful antiques, pottery, used clothes, authentic tiles and much more.” 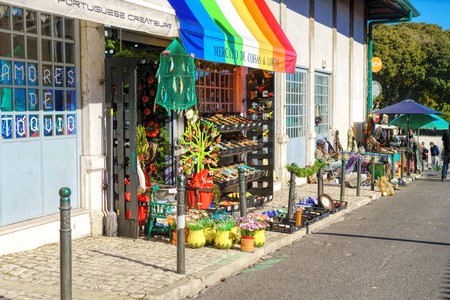 See the Sé and a spiky house

If you’re in the mood to check out some of the famous fado yourself, there are innumerous casas do fado in the vicinity. Katrina recommends that fado fans opt for somewhere that does not charge an entrance fee, and her top pick is Coração da Sé (a two-minute walk from the cathedral), where 30 euros will buy a meal for two accompanied by talented local singers. Otherwise, follow steep stairs downwards to arrive by the waterfront close to Santa Apolónia rail station. 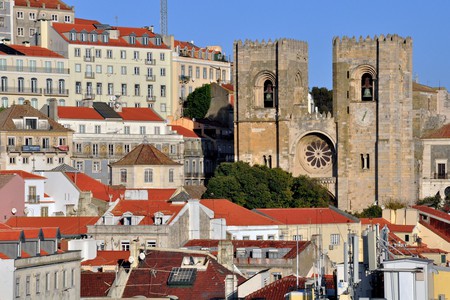