Top Reasons Why You Must Visit the Azores

The volcanic landscapes, dramatic coastlines, waterfalls and natural hot springs of the Azores make it a perfect destination for outdoor activities. Pack your scuba gear and your hiking boots and book an adventure with Culture Trip.

The Azores is a remote Portuguese archipelago in the North Atlantic, made up of nine islands characterised by volcanic activity, rolling green hills, fishing villages and a flare for outdoor pursuits. Adventures here range from the sedentary – think whale watching, soaking in hot springs, munching on fried mackerel – to the extreme, with demanding hikes, waterfall hunting and scuba diving all within reach. Here are the top reasons why you must visit the Azores, Portugal.

It’s got hiking trails for all abilities

The Azores’ second-largest island, Pico, is criss-crossed with hiking trails to suit all levels of experience. For an un-demanding 6.2mi (10km) walk that’ll take about three hours, opt for the Caminho de Santa Luzia. It starts in Lajido do Meio and heads down to the coast, then circles back inland and finishes at the Santa Luzia Church. But to take on more of a challenge, you can summit the 2,351m (7,713ft) Mount Pico, Portugal’s highest mountain. Though it’s a demanding ascent, you’ll be rewarded with the kinds of views usually only seen from an airplane window. 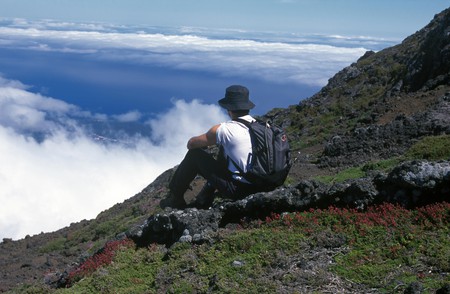 If you’re up for the challenge, the views from Mount Pico are incredible | © Pally / Alamy Stock Photo

Romantic legends are attached to its lakes

Three of the Azores’ most picturesque volcanic lakes are in the northwestern corner of São Miguel, the archipelago’s largest island. The 2.5-mile (4km) Lagoa das Sete Cidades is formed of the so-called Green and Blue lakes, which according to local legend took their respective colours from the tears of a princess and her lover, whose marriage was forbidden by the status-conscious king. Next to it is the smaller but greener Lago de Santiago, and all three can be admired simultaneously from several viewpoints along the EN9-1A road. 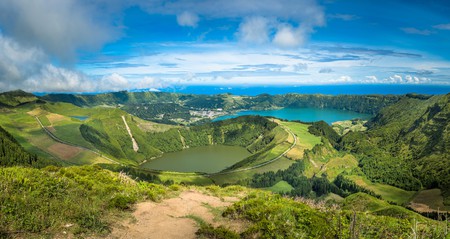 You can go whale and dolphin watching

More than 24 species of resident and migratory cetaceans can be seen in the Azores, including spotted dolphins and sperm, baleen and blue whales – the last of which reach up to 30m in length and weigh as much as 150 tons. The best whale and dolphin watching tours depart from Ponta Delgada and Vila Franca do Campo on São Miguel, recommended for spotting blue whales during the spring; Angra do Heroísmo and Praia da Vitória on Terceira; Horta on Faial; and Madalena, Lajes and Santo Amaro on Pico. 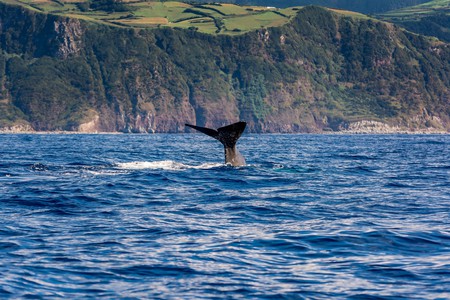 You can soak in natural hot springs

The Azores’ volcanic landscapes are scattered with natural thermal pools, the iron-rich waters of which are said to have curative effects on skin conditions, stress and circulation problems. Head to Furnas on São Miguel island and take a dip at the Poca da Dona Beija baths – a complex of five pools at 39C (102F), set in tropical gardens – or at the Caldeira Velha Centre, where you’ll find three man-made pools, plus another natural spring. 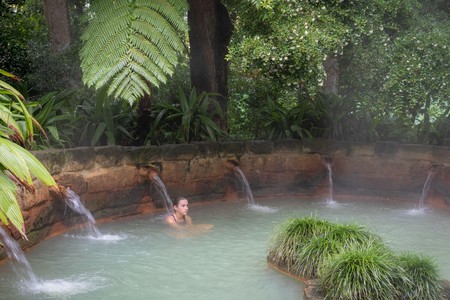 The scuba diving is world class

Shipwrecks, dramatic underwater topography and more than 3,000 marine species make the Azores a scuba diver’s paradise. Among the best diving spots are the Princess Alice Bank in between Pico and Faial, where the waters teem with hammerhead and blue sharks and mobula rays, and the beginner-friendly Shrimp Cave in Pico, which is home to thousands of Narwhal shrimps. Diveable wrecks include the SS Dori, which sank in 1964 off the coast of São Miguel’s capital Ponta Delgada, and the Terceirense, which lies just off the Vila de Praia beach on Graciosa. 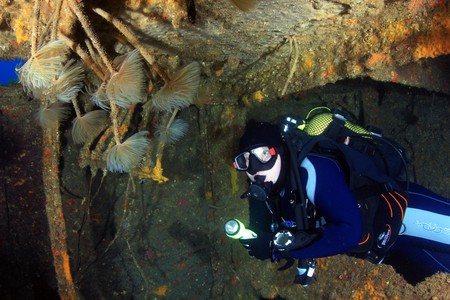 You can go chasing waterfalls

Waterfall hunting is a great way to appreciate as much of the Azores’ unfair share of natural beauty as possible. Make a beeline for São Miguel’s 9m-high Salto do Prego, which you can reach on a 2.8mi (4.5km) circular hike from the bus station in Faial da Terra. Or, the waterfalls in the Ribeira dos Caldeirões natural park are equally stunning. There’s also a botanical garden to visit here, packed with native Azores plant species. Another one of the archipelago’s must-visit falls is the 120m (394ft) Aveiro Cascade on Santa Maria, where you’ll also find a colony of friendly ducks. 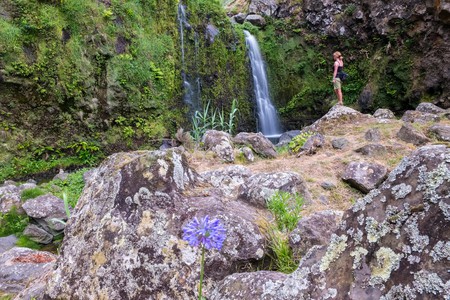 The food and drink is unique

One of the perks of visiting the Azores is sampling food and wine that you’re unlikely to encounter anywhere else. Furnas’ hearty specialty is cozido, a stew of chicken, blood sausage, pork, beef and root vegetables – all cooked in a pot that’s sunk into the volcanic soil for several hours. Along the coast, fried mackerel is one of the most popular snacks. Other regional delicacies include sweet and spicy pimenta da terra (small red peppers) and Curral Atlântis Reserve red wine, from Pico. 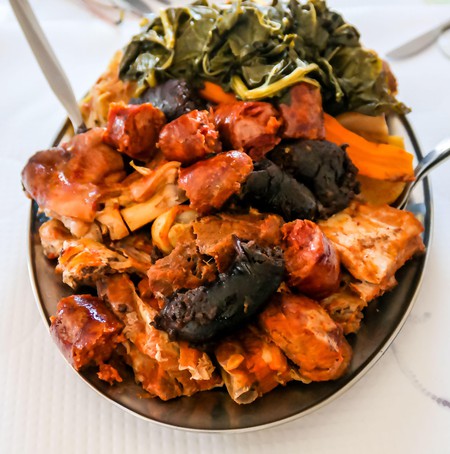 It’s easy to get to

The Azores archipelago might be located in the middle of the North Atlantic, but that doesn’t mean it’s difficult to get to. Ryanair operates direct flights from London Stansted to Ponta Delgada on São Miguel, which is the only island with an international airport – the flight time is around four hours. Several other airlines fly from major UK airports via either Lisbon or Porto. Ryanair and TAP Portugal also fly from destinations throughout Europe, usually via Lisbon or Porto. From the United States, Azores Airlines fly direct to São Miguel from Boston.

Perhaps surprisingly for a remote group of islands that has to import most of its supplies, the Azores aren’t expensive to visit. Shared or private accommodation is possible on even the strictest of budgets, as are decent meals out. Trekking and waterfall hunting – two of the best ways to explore the islands’ unspoilt terrain – are completely free and most of the natural thermal baths can be accessed for small daily fees, leaving you enough cash leftover to book a whale and dolphin watching tour. 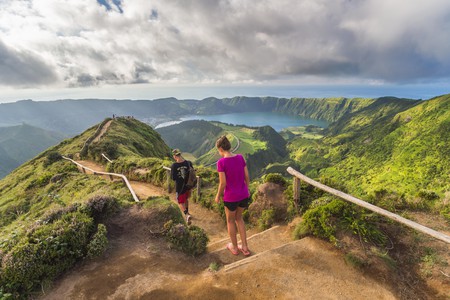 The Azores has year-round appeal

Another of the Azores’ major draws is its mild climate. The yearly average is a just-right 17C (63F), hardly ever rising above 30C (86F) in the summer or below 7C (45F) during winter. Beware though – an average humidity level of 70-80 percent can make the air feel hotter than it really is, and the volcanic islands are famous for having four seasons in one day. Pack a waterproof as well as shorts and t-shirts. 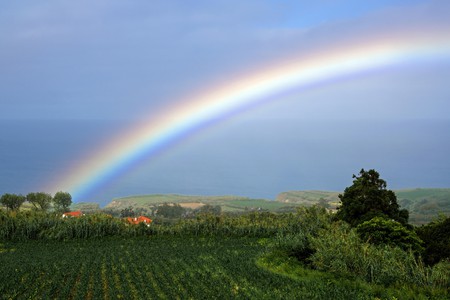 For more itinerary insights, be sure to uncover the top things to see and do in the Azores, including taking a visit to its most beautiful places. And if you’re looking for somewhere to stay, choose one of the best hotels or opt instead for a top resort, all bookable with Culture Trip.