Why Locals Love Porto, According to the People Who Live and Work There 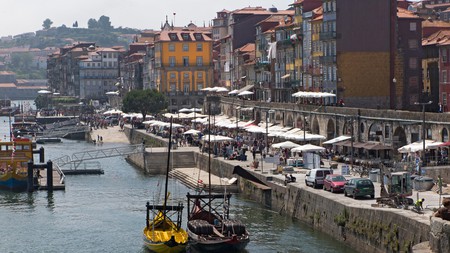 Whether you’re looking to experience café culture, visit independent shops or explore lesser-known areas, Porto is the place for you. Culture Trip spoke to people who live and work in Porto about why they love their city, to give you their top tips on visiting the second-largest Portuguese city.

Strung over a series of hills along the dramatic Douro Valley, home to Portugal’s famous fortified wine, port, and a Unesco World Heritage old town, Porto is a popular short-break European destination. And while it’s not particularly big, it pays to know how best to spend your time there. Culture Trip spoke to local tourism experts, including one of Portugal’s most famous chefs, José Avillez, about how to make the most of their city. 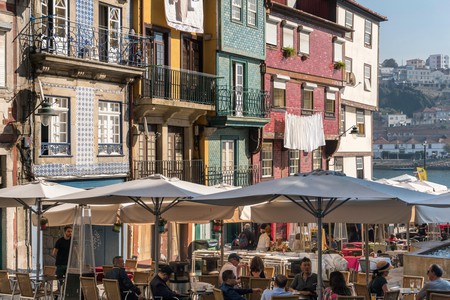 Porto's architecture is one of its most alluring features 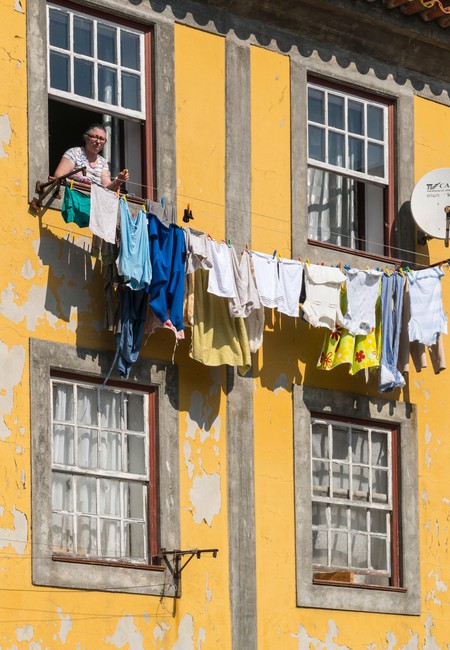 Get lost in Ribeira's historic streets 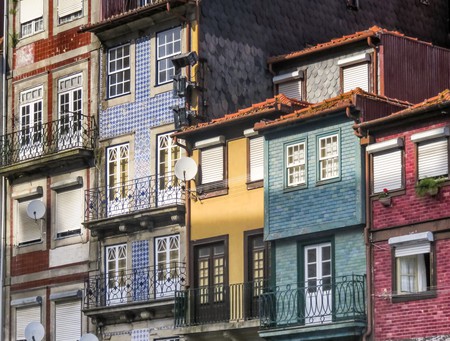 “Get lost in Ribeira, one of the oldest areas in Porto,” says José Avillez. “I like the character of the medieval buildings and to walk near the riverfront.”

José Avillez is one of the leading lights in contemporary Portuguese cuisine. Though his Michelin-Starred Belcanto restaurant is in Lisbon, Avillez has two other restaurants in Porto: the surprisingly affordable Cantinho do Avillez, and Mini Bar, where you can order a tasting menu that offers a decidedly modern take on Portuguese flavours. So, where does a leading chef dine when he is off duty? “Casa Aleixo (Rua da Estação 216), a traditional restaurant near Campanhã railway station. Go for the octopus fillets,” he says. Avillez also recommends two more upmarket Michelin-starred restaurants in and around Porto – the Yeatman and the Casa de Chá da Boa Nova, up the coast from neighbouring Matosinhos. “It’s quite a spectacular venue with an ocean view over the rocks. The building was originally a teahouse built in 1963 by well-known architect Álvaro Siza Viera.”

As Avillez points out, architecture is one of the most alluring features of Porto. “I love the belle époque atmosphere at Café Majestic, one of the oldest cafés in Porto. Ask for a cimbalino, the local word for an espresso, or hot chocolate,” he says. But it’s not just Porto’s historic architecture that catches the chef’s eye, Avillez loves another of Álvaro Siza Viera’s modern buildings, the Serralves Foundation, which he describes as “an amazing area with magnificent gardens, woodlands and a traditional farm”. 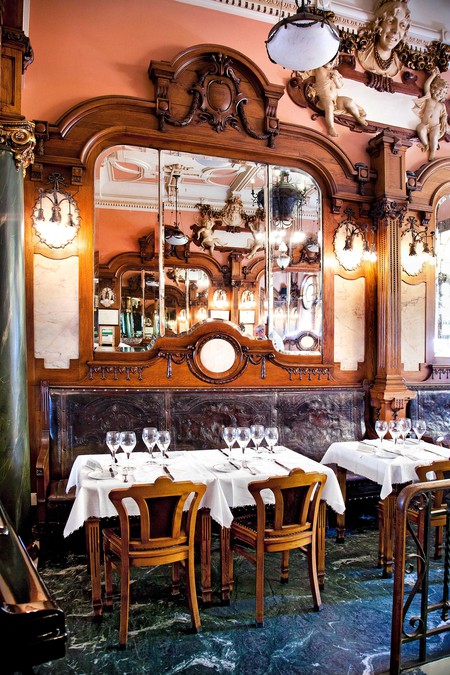 “What I really like about this city is the fact that it is a city of artists for artists,” says Maria Inês Ferreira.

A guide at Porto Bridge Climb, Ferreira spends her working day leading people up the amazing arch of the Ponte da Arrábida, one of the many bridges that crosses the Douro and once the longest reinforced concrete bridge span in the world. “Many important writers, poets and painters used to live here,” Ferreira explains. “Nowadays, there is always so much going on. If you enjoy street art, you can spend hours tracking some of the city’s most prominent artists such as Costah, YouthOne, Chei Krew, Mesk, Hazul and Godmess. You will always be able to find some free concerts and art exhibits, too.” 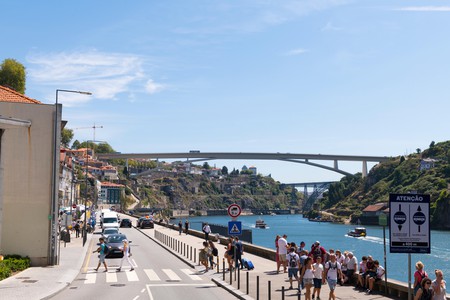 Alongside its art and music scenes, Porto boasts some excellent markets. “On Saturday, I like to go to a few street markets, in Praça de Carlos Alberto, Centro Comercial de Cedofeira, Rua Galerias Paris and Cândido dos Reis,” says Ferreira. “However, my go-to area for browsing is Cedofeita and Miguel Bombarda. It’s where you’ll find some cute little shops if you are looking for something different, be it secondhand clothing and decor or hip concept stores.”

For an experience further off the beaten track, Ferreira suggests, “something a bit under the radar is Casa Museu Fernando de Castro (Rua de Costa Cabral 716). It’s a house from the beginning of the 20th century that is filled to the brim with paintings, sculptures and woodcarving. It’s very interesting, and Fernando de Castro was a peculiar guy whose taste was a bit against the norm of the time.”

And to escape the city? “My personal favourite is going to Afurada, a little fishing village on the other side of the river, in Gaia (there is a boat that does the crossing right near the Arrábida Bridge every 30 minutes, called Flor de Gás).” 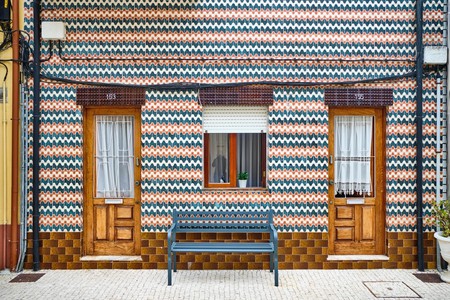 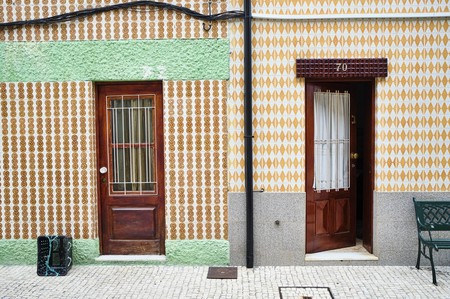 A little fishing village, Afurada is worth exploring 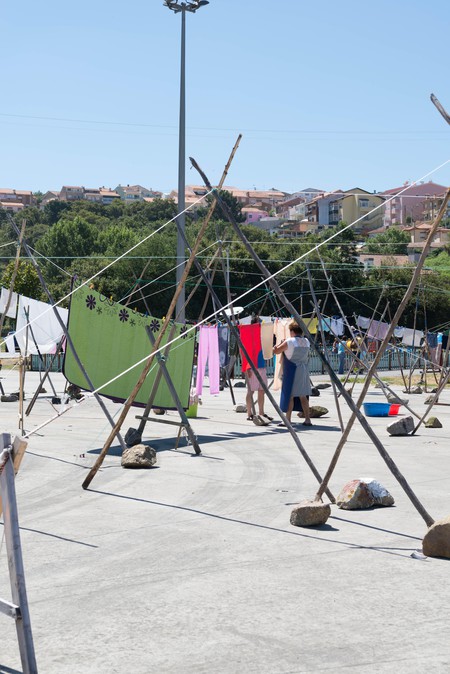 Afurada lies on the other side of River Gaia

“Portugal is very much a coffee nation – virtually every nook and cranny around Porto is crammed with espresso counters,” says John Blandy.

Blandy is the food director of the recently opened Porto Bay Flores, a sumptuous hotel on one of Porto’s pedestrianised streets. For the best coffee in Porto, he says: “Combi (Rua do Morago de Mateus 29), a local coffee roasters, is where you can get a great cup of coffee and buy some beans to go.” Blandy also recommends heading out to the coast at Matosinhos to sample the best fish restaurants. “Gaveto (Rua Roberto Ivens 824) and Valentim (Rua Heróis de França 263) are both great examples for local food, and really showcase the abundance of fresh seafood in the region,” he says.

Though it’s only a short hop from the sea, Porto’s specialities are generally much more meat-based than might be expected, including the famed Francesinha. “This is a local sandwich with assorted pork cuts – such as linguinça, a steak topped with a fried egg before being layered with cheese and then grilled. It is then smothered in a spicy tomato-and-beer-based sauce and typically served with chips. Buffet Fase (Rua de Santa Catarina 1147) has an incredible Francesinha.” 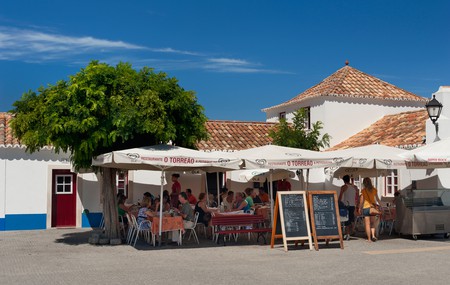 Once you’ve filled up on excellent food, Porto’s shopping scene is worth checking out. “If you are looking for shopping, then look no further than Rua de Santa Caterina,” continues Blandy. “The surrounding streets have some great vintage shops for those hunting for something a little different.”

To relax, Blandy recommends the city’s main park. “The Jardins do Palácio de Cristal are always well worth a stroll. The beautiful gardens here allow for some stunning vistas over the Douro river and peacocks roam free, adding to the opulence of the setting.” 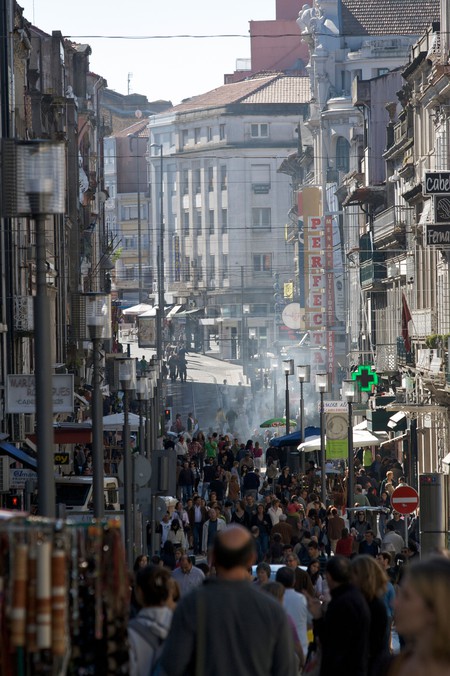 “Porto has changed in a nice way. It’s a European city that hasn’t lost its identity. I hope it keeps evolving without losing its authenticity,” says Pedro Martin.

As a guide for Porto Walkers, and someone who walks for much of the day, not surprisingly, Pedro Martin likes to take one of Porto’s vintage trams when he’s off duty. “Take the number 1 tram from Infante to Foz, the place where the river Douro meets the Atlantic Ocean,” he suggests. Here you’ll find an extensive seafront promenade fringing some fine – if windswept – sandy beaches. 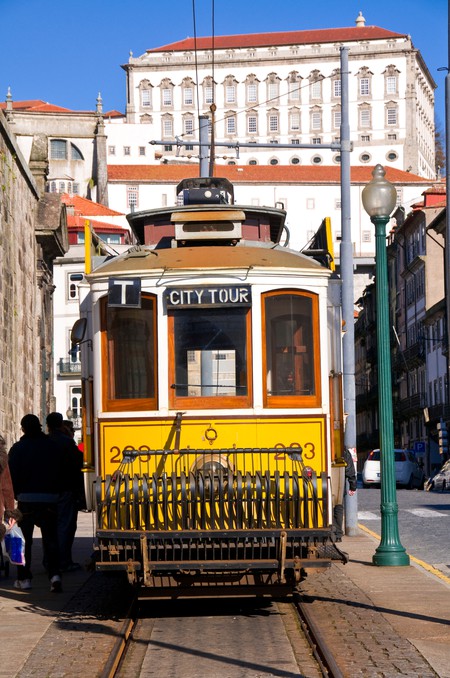 Back in Porto, Martin’s favourite café is Guarany, right on the central square at Avenida dos Aliados 85. Its cavernous interior is a great spot for a coffee or a glass of port. “It looks amazing after a recent restoration and I’m an absolute fan of the paintings of Graça Morais [a well-known contemporary artist whose vibrant paintings adorn the walls].”

Porto residents are known as tripeiros (tripe eaters), and Martin encourages visitors to try “tripas à moda do Porto (tripe stew) if you are brave enough, with a red wine from the Douro; or Francesinha if you are crazy enough to raise your cholesterol levels, and do it with a local brand of craft beer.”

And where does a walking guide go for a stroll? Martin suggests crossing the top tier of the Ponte de Dom Luís I bridge, which is shared between pedestrians and the metro. “There, simply enjoy a breathtaking view of Porto.” 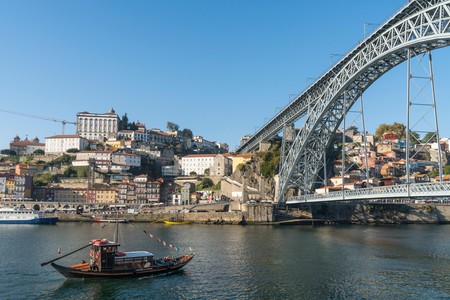 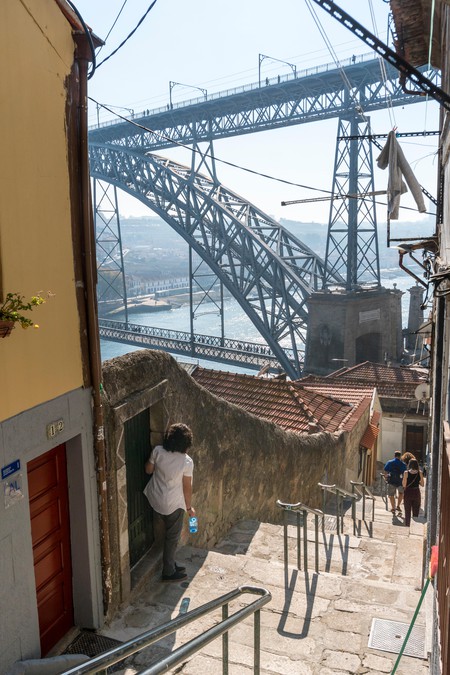 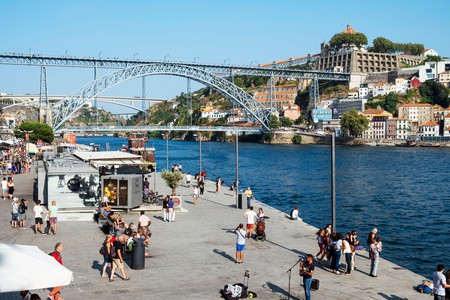 There are breathtaking views of Porto from Ponte Luis I

“Tourists don’t realise, before coming to Porto, how much past and traditional memories our monuments capture,” says Jorge Rosas. “Porto is the city where the name of Portugal was born,” continuing: “The historic centre of Porto, the Luis I bridge and Monastery of Serra do Pilar (near the top of Ponte Luis I, opposite Porto) are all protected by Unesco.”

With so many visitors coming to Porto for short breaks, Rosas, the CEO of Ramos Pinto port, says, “a perfect weekend would include visiting the stunning São Francisco Church and the Palácio da Bolsa, a nearby palace. You should also get to know the Ramos Pinto Museum and Cellar, and the Casa da Música concert hall to hear a pleasant classical music concert.” Whether or not you manage to catch a performance, the concert hall, a stunning futuristic slab of a building by Dutch architect Rem Koolhaas, is well worth seeing from the outside alone.

But what does the head of one of the major port wine lodges recommend to eat and drink in Porto? “I would definitely drink a Duas Quintas Reserve Red in Adega de São Nicolau while eating an octopus rice,” says Rosas. The modest, low-ceilinged restaurant is just back from the riverfront on Rua de São Nicolau 1.

To experience the wine region near Porto, Rosas advises, “a perfect day out would be to one of Ramos Pinto vineyards, of course. For example, in Quinta de Ervamoira in Vila Nova de Foz Côa, in the Guarda district. The time stops when I’m in Ervamoira.” 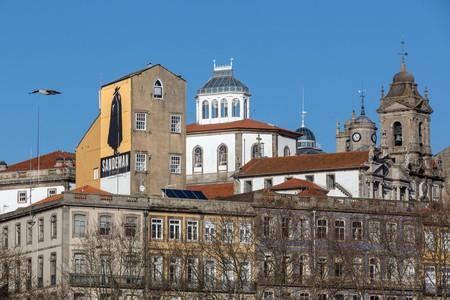 The historic centre of Porto is protected by Unesco 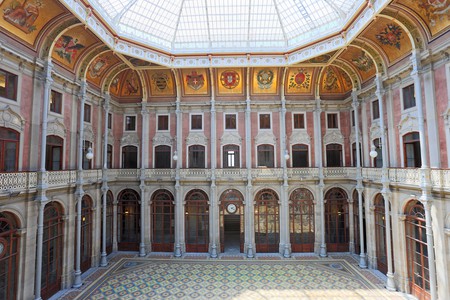 Explore the Palacio da Bolsa, a beautiful palace in Porto 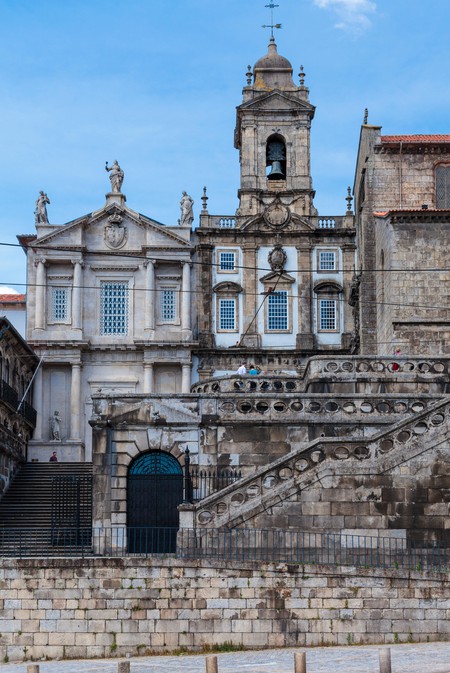 “Everything in Porto is special. My favourite things about the city are the panoramic views, especially that of Miradouro da Vitória (a viewpoint off Rua da Vitória) and Mosteiro da Serra do Pilar,” says Tiago Valente.

Tiago Valente, Port Wine Educator at Cockburn’s Port Lodge, recommends some of his favourite things to do in Porto. “I love sunsets and I enjoy the sunset at Jardim das Virtudes,” he says. This tucked-away garden is a popular student hangout thanks to the nearby university. Valente also recommends Museu D’Avó as “a quiet low-cost and lovely restaurant, perfect for any occasion!” Its wacky decor (there’s an old bike hung on the wall) certainly attracts the eye. “My favourite café is Embaixada Lomográfica (Praça de Carlos Alberto 121). It’s a nice place with a cosy atmosphere and is LGBTQ friendly. Plus, it has a retro design with a modern touch.”

However, perhaps the most alluring aspect of Porto to locals and visitors is its unique position, threaded along the deep crease of the Douro River. There is something undeniably romantic about its steep cobbled streets and medley of crumbling houses and ornate buildings. Perhaps that is why Pedro Martin says, “If you go for a walk around the city at night, you will probably fall in love!” 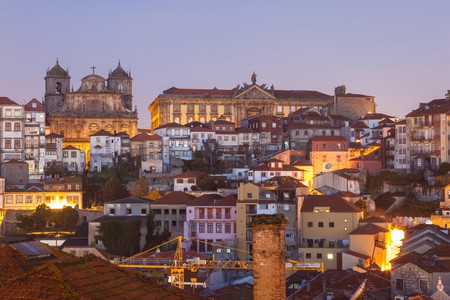 Perhaps the most alluring aspect of Porto is its unique position, threaded along the deep crease of the Douro River | © Slawek Staszczuk / Alamy Stock Photo