The Most Scenic Train Journeys From Lisbon 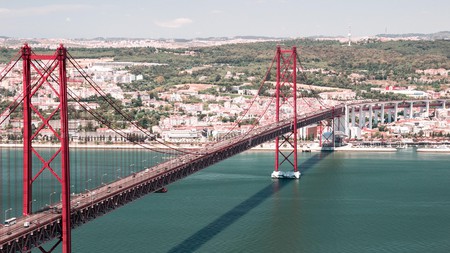 No trip to Lisbon would be complete without a train ride into the diverse beauty of Portugal. Day trips on the Portuguese railway system are cheap and easy, offering a whole new dimension to your travels. Here are the most scenic routes on offer from the capital.

Portugal’s railway network is cheap to use, and its trains are usually comfortable, making for journeys that are relaxing for both you and your wallet. With such a wide variety of scenic destinations in a relatively small country, there are plenty of opportunities to spend a few hours or a full day outside Lisbon – even on a short city break. Experiencing the natural beauty of the River Tagus or the architectural elements of the bridges and aqueducts is simplest by rail, so put your luggage on the rack, grab a seat by the window and let Portugal come to you.

Cross the bridge to Setúbal

A popular day-trip destination for Lisboetas, Setúbal is around an hour away from the Portuguese capital by train, and the journey is quick, cheap and scenic. You will cross over the Tagus on the Ponte 25 de Abril, which offers views of Lisbon, Belém and beyond. The Ponte 25 de Abril was constructed by the American Bridge Company, which also built the San Francisco-Oakland Bay Bridge but, perhaps surprisingly, not the visually similar Golden Gate. It was first opened as the Ponte Salazar in 1966, but the train deck has only been in use since 1999. Over the bridge, you will see the giant Cristo Rei statue up close, before the train travels under the 18th-century Aqueduto das Águas Livres. 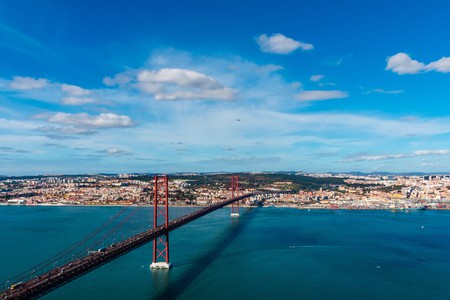 Unlike other lines in Portugal, the train to Setúbal is run by a private company, Fertagus, but you can still use your Viva Viagem card to get here (€4.55, or £4, one way). You can board at Roma-Areeiro, Entrecampos, Sete Rios or Campolide stations in Lisbon, and there is no need to book in advance. The trains are air-conditioned and have plenty of space for bikes and luggage if you avoid the rush hour.

Avoid the damp, sandy seats for this one because this short rail excursion reaches the beautiful beaches of Cascais, straddling the Tagus and passing under the Ponte 25 de Abril on the way, into and through Belém. You might also want to visit one of the other beaches on the route, such as Praia de Carcavelos. Try to get a seat on the left-hand side of the train for views of the coast.

The train to Cascais is fast and cheap, costing just €2.25 (£2) for a single journey of around half an hour. There are several trains every hour from Cais do Sodré, but they can get quite busy at peak times. Just turn up with some money on your Viva Viagem metro card and hop onto the first train available – as early as you can if you want a good seat. 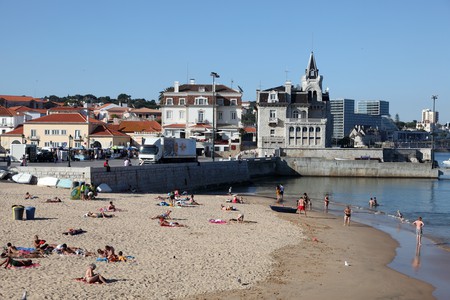 An ornate departure to Sintra

Sintra’s castles, peaks and restaurants make it a popular destination, even for weekend city breaks. Unlike most trips, you might want to allow extra time before leaving to take in the Neo-Manueline architecture of Rossio station, an ornate building constructed in the late 19th century and adorned with sculptures, turrets and striking horseshoe entrances. The often busy commuter train starts with a speedy ride through a 2.9-kilometre (1.8-mile) tunnel, a technological marvel when it first opened in 1890. You will soon break through to the outskirts of the city and past the Aqueduto das Águas Livres towards the lush Parque Natural de Sintra-Cascais. 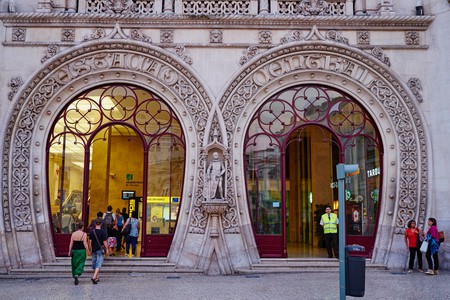 There are trains to Sintra from Rossio every half hour, and it costs €2.25 (£2) each way for the 40-minute journey. As this is a commuter train, avoid rush hour and also factor in tourists at weekends, holidays and high season. Get your ticket on the day with your Viva Viagem metro card. Check the Comboios de Portugal website for timetables. 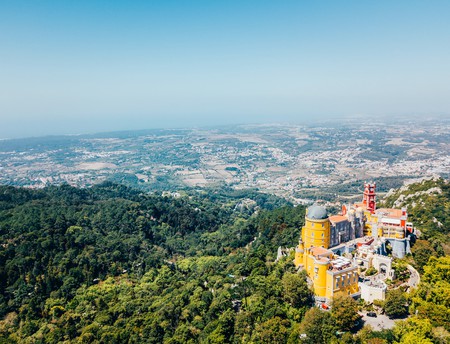 Skirt along the Atlantic to Porto

The train ride from Lisbon to Porto offers some of the best views of the country. It passes through Coimbra – Portugal’s capital from 1131 to 1255 and still home to a Roman aqueduct and 13th-century university – and Aveiro, known sometimes as ‘the Portuguese Venice’ due to its waterways and boats. The train passes the 12km (7.5m) cable-stayed Ponte Vasco da Gama, the second-longest bridge in Europe, as it follows the Tagus, before entering the hilly landscape approaching the fresh breeze of the Atlantic coastline. 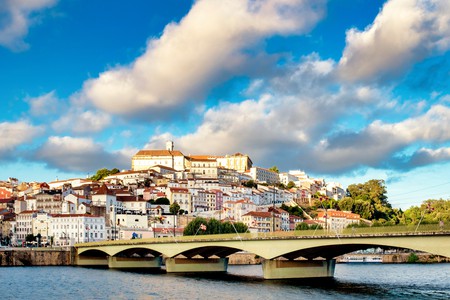 Through the southern plains to Faro

Faro and the Algarve are often holiday destinations in and of themselves, with their sandy beaches bustling with tourists during high season. This journey is a longer one than the other trips mentioned, coming in at three to four hours, but it’s a comfortable ride and relatively cheap, zipping past the green-yellow fields as it goes south. The slower train is an Intercidades, which is marginally less expensive, or you can pay a little more for the high-speed Alfa Pendular, with Wi-Fi, comfy seats and a snack bar. You will notice the tilt of the faster train, and the smoothness of travel helps you forget that you’re travelling at up to 220 kilometres per hour (137 miles per hour). 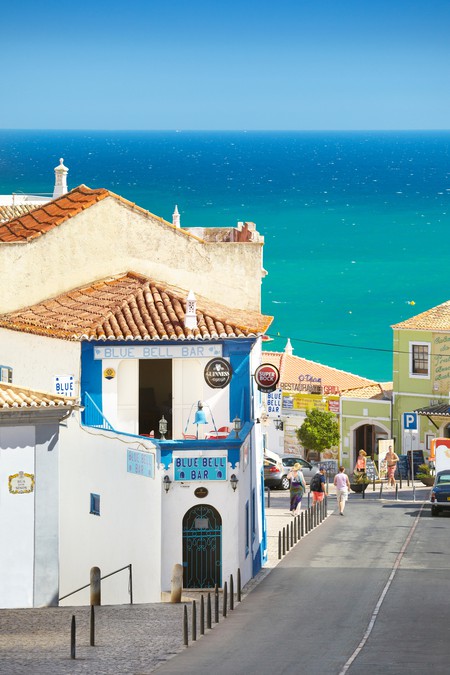