The Most Beautiful Places to Visit in the Azores 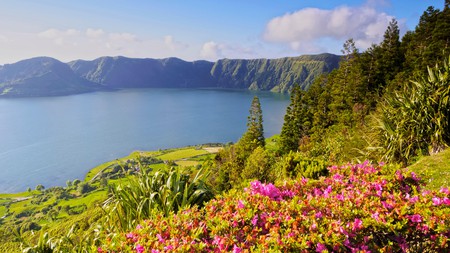 It’s not hard to see why the remote Portuguese archipelago of the Azores is known as the Hawaii of Europe. Volcanic landscapes, crater lakes like Sete Cidades, hot springs such as Terra Nostra Garden and pristine coastline characterise the landscape – it’s tailor-made for adventure holidays that include hiking, quad biking, sea swimming and dolphin watching. Here are the most beautiful places to visit in the Azores, Portugal. 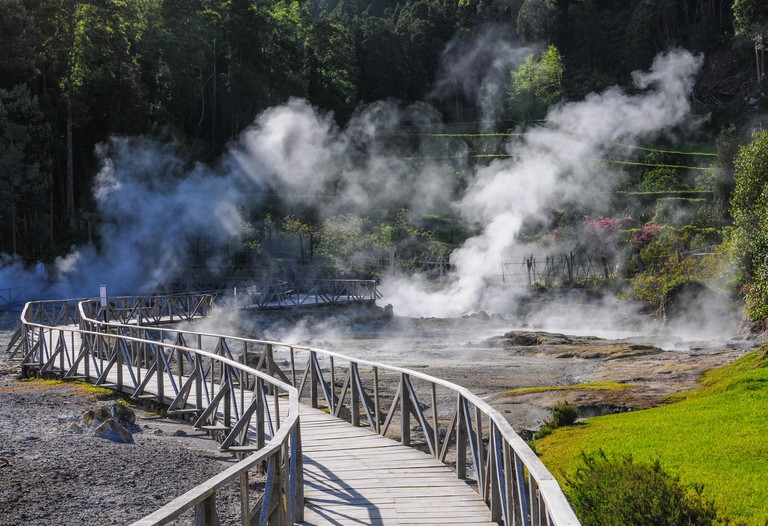 © Bigred / Alamy Stock Photo
A 45-minute drive east of Sao Miguel island’s capital Ponta Delgada, the village of Furnas occupies one of the planet’s most active geothermal areas. One of its top attractions is the 200-year-old Terra Nostra Garden, where you can bathe in therapeutic natural minerals in a hot thermal pool, then wander between centuries-old trees feeling fully relaxed. In the village itself, check out the neogothic Igreja de Nossa Senhora da Alegria (Church of Our Lady of Joy) and, just down the road, La Casa Invertida – an upside-down house that has to be seen to be believed. 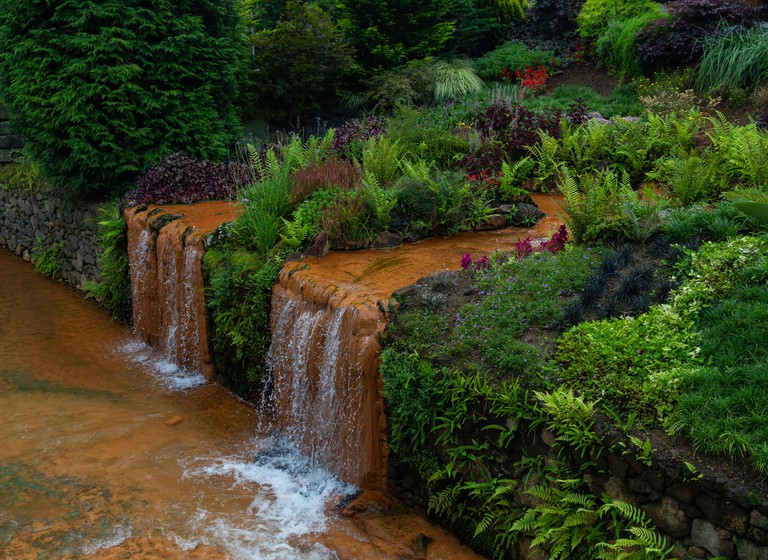 © Bruno Coelho / Alamy Stock Photo
In addition to the Terra Nostra Garden, you can also soak in Furnas’s Poça da Dona Beija hot springs complex. Set in lush gardens and named after a Brazilian soap opera that aired in Portugal in the 1980s, it consists of several open-air pools with standard temperatures of 39C (102F), plus on-site showers and changing rooms. The iron-rich waters are said to ease circulation problems, stress and skin irritations. 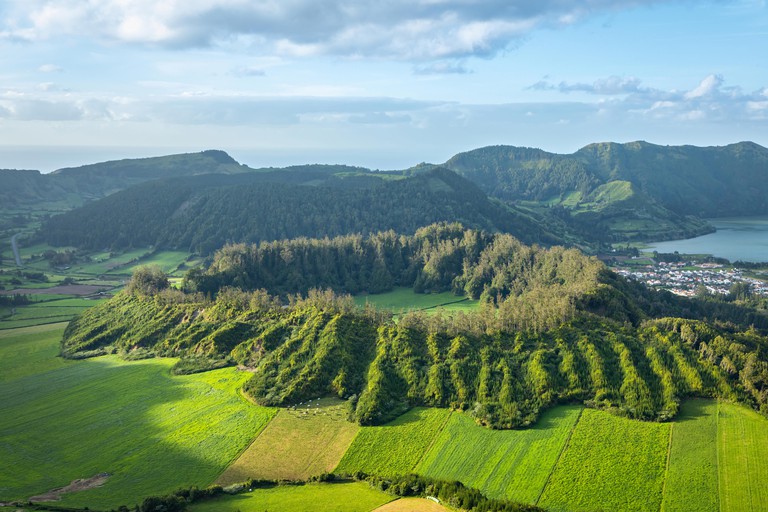 © Sergey Dzyuba / Alamy Stock Photo
In the middle of the island of Faial is a volcanic crater 1.5mi (2km) wide and 400m (1,312ft) deep, blasted by an eruption some 400,000 years ago. The Caldeira – also known as the Cabeço Gordo, meaning ‘fat mountain’ in Portuguese – can be circumnavigated by a rim-top hike of 5mi (8km), where you’ll meet its resident grazing cows and take in unbroken views of the neighbouring islands of Pico, Sao Jorge and Graciosa. That’s if the weather plays ball – conditions can change quickly here, so pack layers and bring a waterproof. 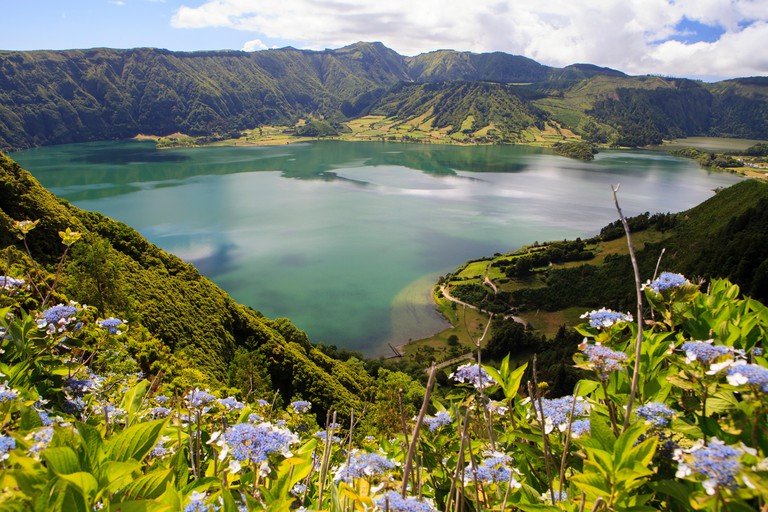 © Magdalena Bujak / Alamy Stock Photo
Sete Cidades Lake sits on the northwestern tip of Sao Miguel and is the largest body of water in the Azores. It occupies a volcanic crater 2.5mi (4km) long, 1.2mi (2km) wide and 350m (1,148ft) deep, which hold the famous Blue and Green Lakes. According to legend, these were formed by the tears of a shepherd and princess forbidden from marrying by a tyrannical king. Head to the Boca do Inferno and Vista do Rei viewpoints for the best vistas of the natural teardrops. 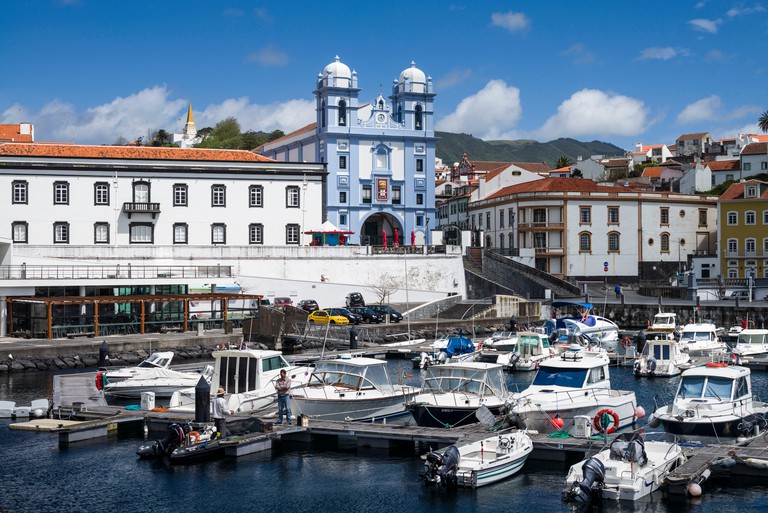 © Walter Bibikow / mauritius images GmbH / Alamy Stock Photo
Declared a Unesco World Heritage Site in 1983, Angra do Heroísmo is the capital of Terceira and the Azores’ oldest city. It played a vital role in Portuguese trade with the East Indies throughout the 15th and 16th centuries, and provided a haven for sailors escaping storms and pirates. Its top historical attractions include the 16th-century San Sebastian Fort – part of which now houses a four-star hotel – the Praça Velha town square and the twin-towered, blue-and-white facade of the 18th-century Igreja da Misericórdia. 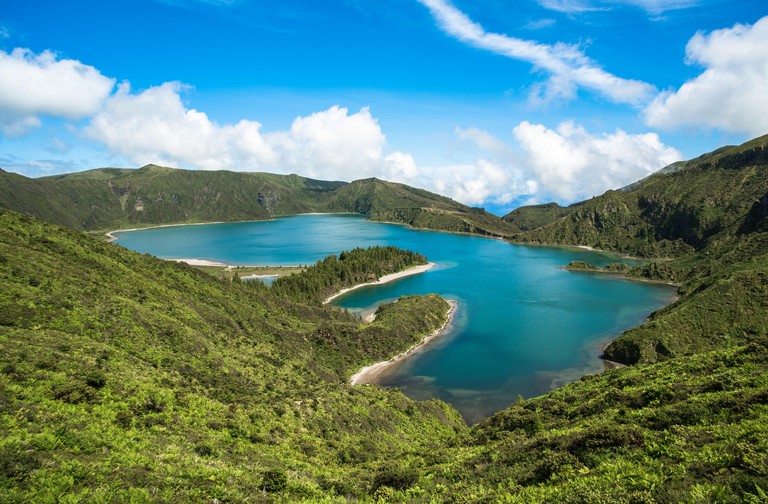 © Konstantin Kalishko / Alamy Stock Photo
Sounding like something from Game of Thrones, the Lagoon of Fire lies at the centre of Sao Miguel’s Agua de Pau volcanic complex, in the middle of the island. It was formed around 5,000 years ago – making it one of the Azores’ youngest volcanic offspring. It last erupted in 1563, so it’s safe to take on the 8.6mi (11km) return hike to the top. It starts on the coast in Agua d’Alto: follow the dirt track off the EN1-1A road, just past the Segredo Waterfall. 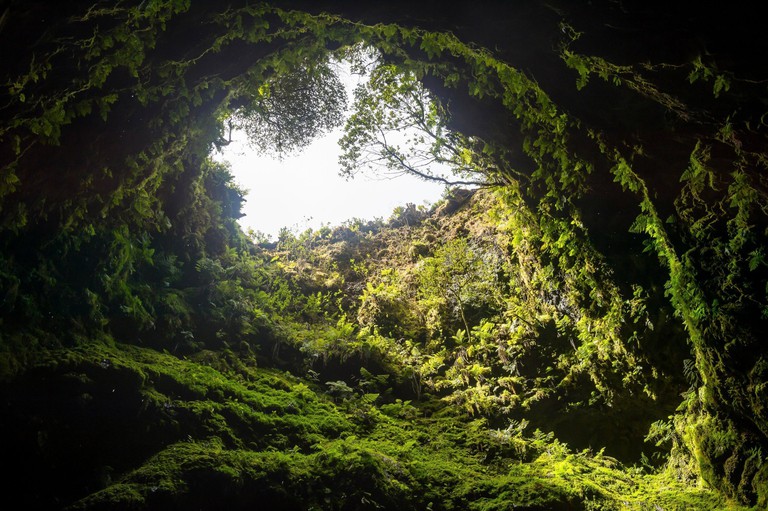 © Michael Runkel
Ticked off just about every hike on an Azores volcano? Then head to the Algar do Carvão in Terceira and take a walk inside one. First explored in 1893, this 90m (295ft)-deep chimney was created around 3,200 years ago, as molten lava drained from the upper rim into a subterranean chamber. A staircase has now been built into the cavern, so you can descend into its depths to marvel at the stalactites hanging from the roof, the dense vegetation covering its almost-vertical walls and the underground lake. 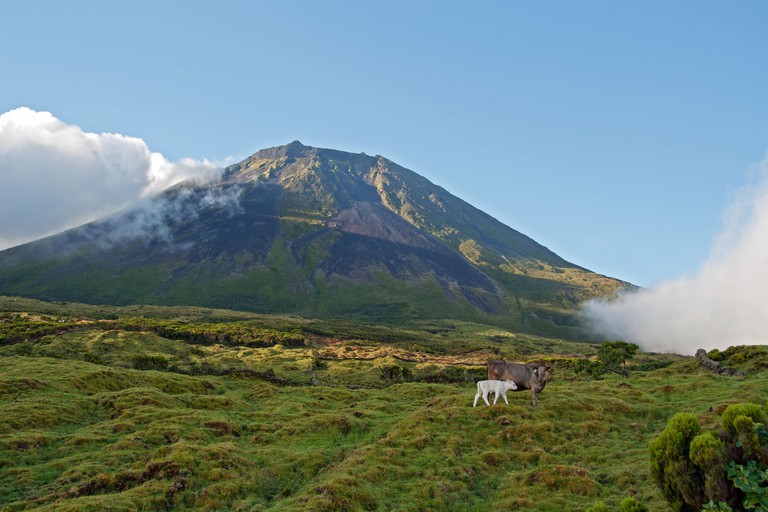 © Geoff Doran / a-plus image bank / Alamy Stock Photo
Head to the island of Pico to trek to the top of Portugal’s highest mountain, Mount Pico – which is 2,352m (7,713 ft) above sea level. Whether you’re following a guide or going it alone, start at the Casa da Montanha Visitor Centre, where some easily missed steps mark the trail’s starting point – ask inside the centre if you can’t find it. From there, a series of numbered, wooden poles indicate the way to the summit, navigating potentially ankle-snapping terrain. Climb with your hands and feet for the final ascent and allow between five and eight hours for the return hike. 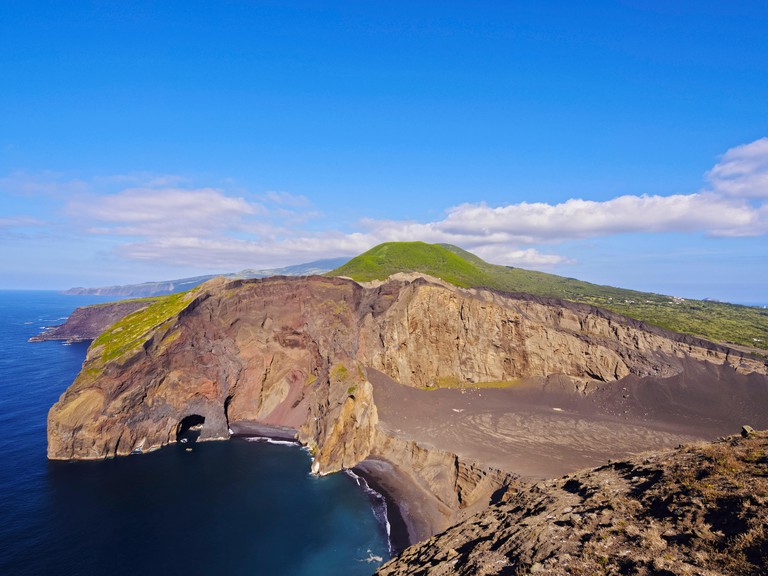 © Jon Arnold Images Ltd / Alamy Stock Photo
The Capelinhos lava fields are part of the Capelo volcanic complex, on Faial island’s westernmost extremity. Now a blackened wilderness, this was the site of a volcanic eruption that began in September 1957 and lasted for 13 months, obliterating hundreds of houses and displacing around 40 percent of the island’s residents – many of whom ended up emigrating to the United States. A walking trail to the summit starts at the interpretation centre, where you’ll also find the scorched remains of the lighthouse – you can climb it for a small fee.

A circular hiking route of 4.6mi (7.4km) leads to the top of Monte Brasil, a dormant sea volcano connected to Angra do Heroísmo. Starting in Relvao Park, the trail takes you past the late 16th-century Fortress of St. John the Baptist and the early 17th-century St Antonio Chapel, before winding through forests to the 250m (820ft) Pico do Facho viewpoint. At the volcano’s southernmost tip, the Vigia da Baleia provides an unbeatable spot for whale-watching. Allow around 2.5 hours for the return walk.

For help planning your itinerary, we’ve compiled a list of all the reasons why you must visit the Azores, including the top things to see and do while you’re here. And if you’re looking for somewhere to stay, choose one of the best hotels or opt instead for a more luxurious resort in the Azores, all bookable with Culture Trip.