The Best Things to Do in Ericeira, Portugal 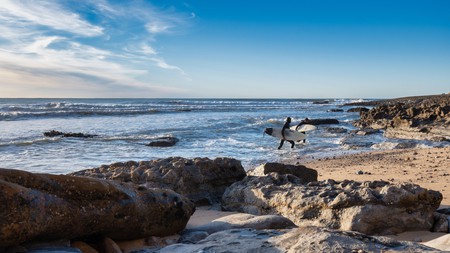 Whether you’re riding barrelling waves at Coxos or sipping Portuguese wine on the seafront, there’s plenty to keep you occupied in the laid-back surf town of Ericeira.

Declared a World Surfing Reserve in 2011, Ericeira is one of the best places in Portugal to ride waves. This 8km-long (5mi) coastline is home to world-class breaks including Ribeira d’Ilhas and Coxos. Beyond the surf, there are excellent seafood joints and cute tapas bars to while away the long summer evenings. Read on to discover the best attractions in this coastal town.

Learn to surf at Foz do Lizandro 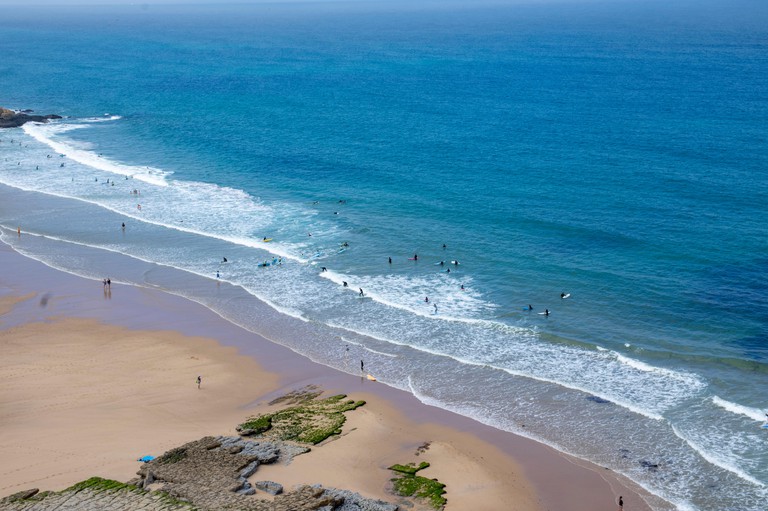 © OLATZ ALTUNA / Alamy Stock Photo
4km (2.4mi) south of Ericeira, this calm, sandy beach stretches inland along the banks of the Lizandro River, as well as northwards along the Atlantic Coast. Several surf camps and academies as well as a swell of about 2m (6ft) make it a popular spot for newbies, especially as it’s often less crowded than the beaches further north. Once you’re done, head for one of the chiringuitos (beach bars) for a cold Sagres beer – Kanoe Beach Point has a huge terrace. 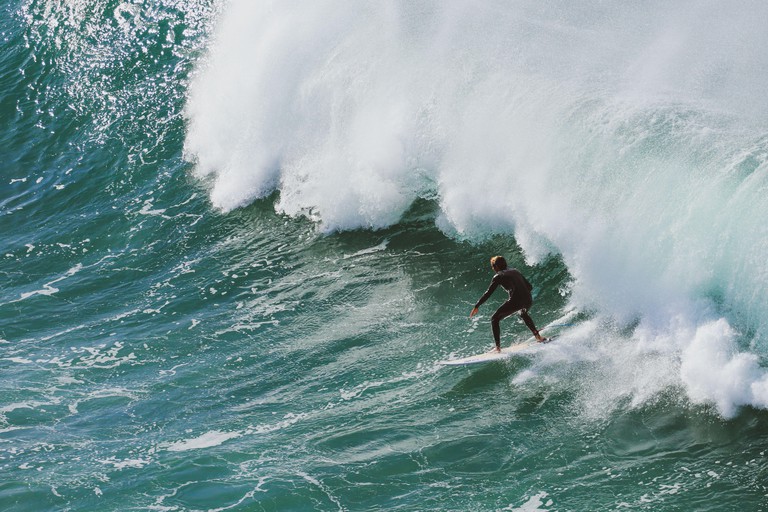 © NVPHOTO / Alamy Stock Photo
For surfing inspiration, watch pros tackle Hawaiian-style waves at Coxos Bay, a World Surfing Reserve situated 6km (3.7mi) north of Ericeira. Top Portuguese surfers such as Tiago Pires (who runs a surf school just down the road) and Ruben Gonzalez are frequently at Coxos, riding fast-moving barrels of up to 3m (10ft) in height. Another factor that makes Coxos suitable for veterans only is the tricky entry into the water, over sharp rocks that are often covered in sea urchins. 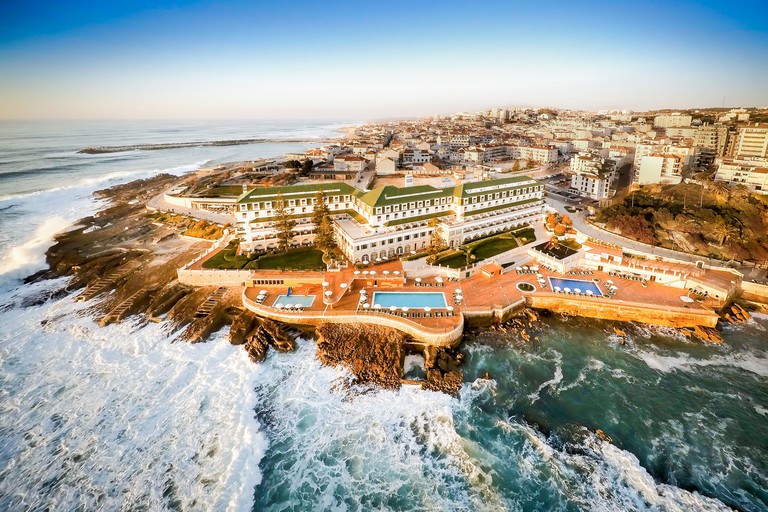 Courtesy of Vila Gale / Expedia.com
As one of the few beaches in the area that’s not primarily used for surfing, the Praia da Baila is ideal for bathing. It is so-called because a giant whale washed up on its shores in the 19th century. A sheltered swimming area for young children and the westernmost four-star hotel in Europe, the Vila Gale, are among the key highlights. Non-guests can pay a daily fee to use the hotel’s two pools – one of which is seawater – overlooking the Atlantic. It’s reached by a 10-minute walk from the town centre. 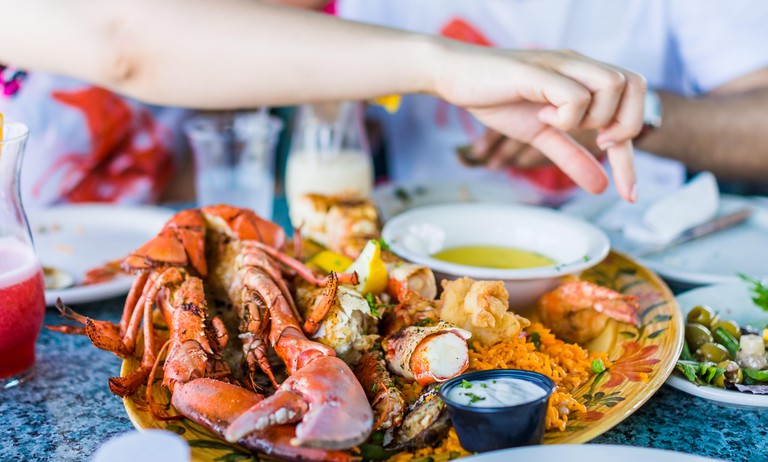 © Kristina Blokhin / Alamy Stock Photo
Pulling you in with its cheerful blue-and-white façade, Mar à Vista is strictly for seafood lovers, as the only things on its menu that don’t have shells are the salads. Locally caught spider crabs, clams and lobsters are steamed and eaten straight from their encasings or thrown into the Portuguese classic cataplana – a seafood stew named after the copper pot in which it’s cooked. Pair with Portuguese Dory white wine or a cold beer.

Ride the bowl in the Matadouro skate park 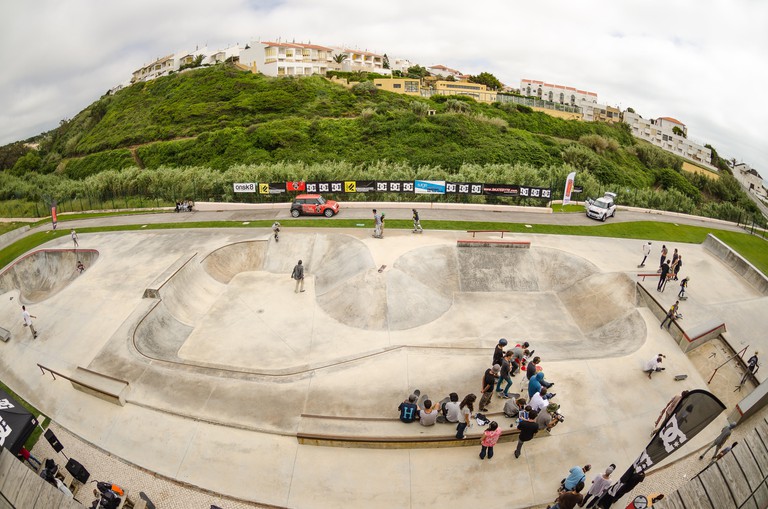 © Panther Media GmbH / Alamy Stock Photo
The Boardriders Quiksilver store is situated about a half-hour walk (or five-minute drive) north of Ericeira’s Old Town. After browsing the aisles for street, surf and skatewear, head to the skate park opposite, where you can drop into the smooth concrete bowls or watch off-duty surfers do their thing. Alternatively, order a cold one from the onsite bar, and take it out to the terrace, from where you can enjoy views out over the rocky Matadouro Beach.

Bakery, Cafe, Portuguese
Facebook
Email
Twitter
Pinterest
Copy link
Share
Map View
No sweet-toothed traveller leaves Ericeira without calling in at Casa da Fernanda, situated just by Praia dos Pescadores. This modest cafe is known for doing the best ouriços – sweet, almondy cakes that are a local speciality – in town. Order a box of them – one won’t be enough – and devour them on one of the tables outside or on the beach overlooking the Atlantic. Then, go back and try the cinnamon biscuits and apple tarts.

Hang out at Santa Marta Park

Santa Marta Park is a spacious area of seaside greenery that’s ideal for families. Enjoy a game of mini-golf or Ping-Pong. Alternatively, let the little ones loose on the well-equipped playground before having lunch at seafood specialist Restaurant Sul (which has a terrace overlooking the Atlantic). The fruit juice and ice cream at PSM Cafe Lounge are also great. Other facilities found throughout the park include skating rinks, tennis courts and spaces for outdoor shows and concerts.

Watch the sunset with a glass of wine 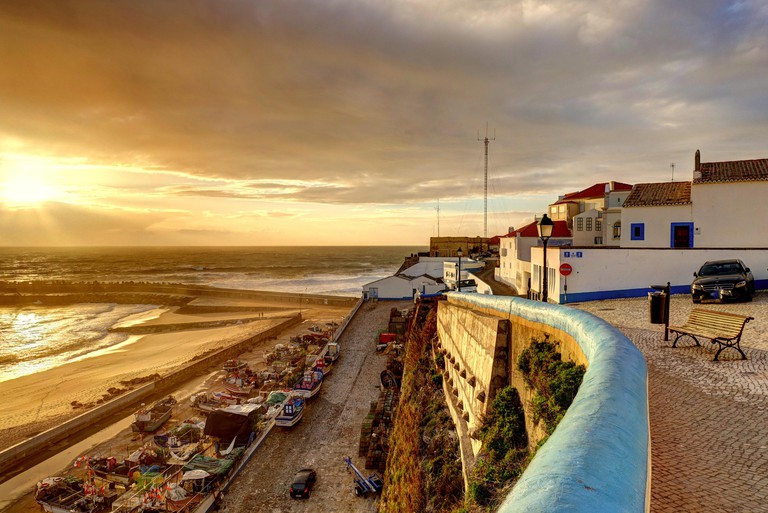 © Mehdi33300 / Alamy Stock Photo
Book a front-row seat for the sunset at Mar das Latas, a teeny tapas and wine bar situated on one of the westernmost points in Europe. Facing the ocean on the promenade behind the Fisherman’s Beach, the outside tables are practically fought over every evening. This is not only for nature’s end-of-day spectacular but also for bites such as beef tartare, crispy shrimp and a selection of superb Portuguese wines. Space is limited here, so book in advance.

After a busy day, wind down for your evenings in Ericeira with the best restaurants and bars in the area.