The Most Beautiful Towns in Portugal 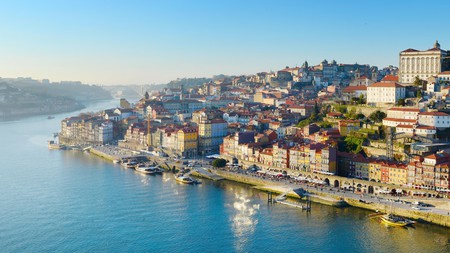 An aerial view of the city of Porto in the north of Portugal, which is famous for its fortified wines | © Ivan Nesterov / Alamy Stock Photo

Portugal is brimming with beauty, both urban and rural, and here we list Culture Trip’s pick of the unmissable towns to visit there, from the Azores to Porto, each one stunner in its own unique way.

Portugal has all the Mediterranean motifs that make a vacation such a photogenic pleasure: the red-tiled, whitewashed architecture, the tiny towns asleep in the searing afternoon, the seafood lunches by glittering harbours. Discover a country as vivid and original as the azulejos tiles that cover the facades of its baroque palaces. 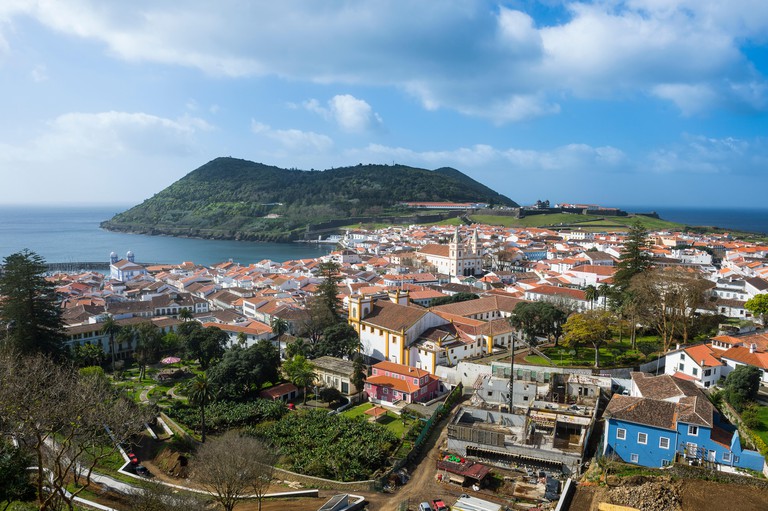 © Westend61 GmbH / Alamy Stock Photo
Out in the Atlantic Ocean, almost 1,448km (900mi) west of mainland Portugal, lie the Azores, an intriguing nine-island volcanic cluster. Angra do Heroísmo is one of the principal settlements, and the oldest continuously settled town. The surrounding terrain is idyllic, with sweeping green hills and pastures, dramatic cliffs and rolling, diaphanous ocean as far as the eye can see. Angra do Heroísmo is renowned for its history and culture. The town is centred around the 18th-century Praça Velha, a large, handsome square with numerous streets and winding alleys leading off it, taking the curious to beautiful palaces, churches and forts.

Beachy Aveiro has a uniquely beautiful network of canals that wind their way through the city, hence its nickname the Venice of Portugal. But in most other ways it is conventionally charming. Every street is lined with photogenic Portuguese architecture: idyllic whitewashed Mediterranean houses and traditional façades clad in azulejos, the glazed ceramic tiles for which Portugal is celebrated, in all colours and patterns. The town is a dream if you’re the type who likes to wander, with small bridges and quaint courtyards at every turn. Central to it all is the Cathedral of Aveiro, a masterpiece of Portuguese baroque architecture you mustn’t miss. 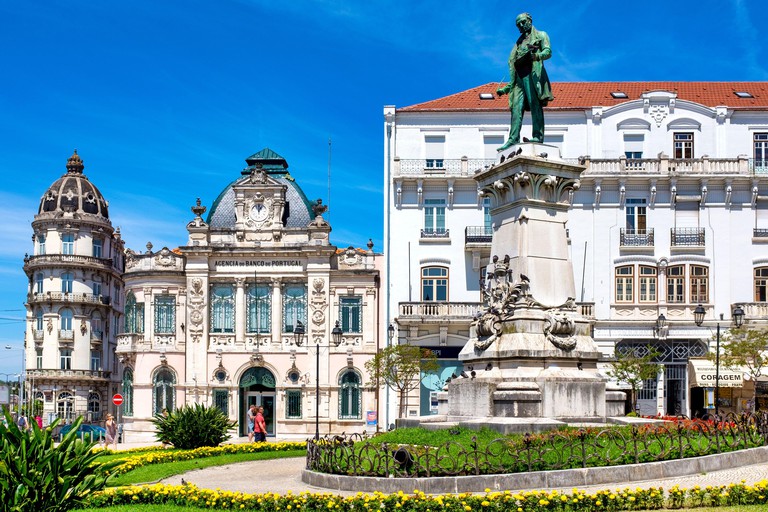 © Fabrizio Troiani / Alamy Stock Photo
On the picturesque banks of the Mondego River, and home to one of Europe’s oldest universities, Coimbra has long been among Portugal’s key centres for arts and culture – and you can visit as part of Culture Trip’s exclusive nine-day Portugal adventure, led by our local insider. The city cascades down the hillside towards the water, revealing at various levels new architectural treasures, from Renaissance and baroque cathedrals to Moorish-inspired palaces. The university is woven into Coimbra’s historic weft, composed of richly decorated courtyards and college buildings dating back to the 16th century. The Joanine library, an extraordinary blend of elegance and decadence, is a bibliophile’s paradise.

Cathedral, Church, Ruins
Facebook
Email
Twitter
Pinterest
Copy link
Share
Évora is a member of the Most Ancient European Towns network, and it richly deserves to belong. The place is extraordinarily well preserved, still in possession of remnants of the original medieval city walls and palaces, dating from the 14th to the 17th centuries. You can see, too, the beautiful remains of the Roman Temple of Évora, a first-century temple dedicated to the Emperor Augustus, deemed one of the best-preserved in the Iberian peninsula. Weaving among Évora’s monumental chunks of history are winding lanes and bustling streets lined with traditional, red-roofed, whitewashed houses and peaceful groves of trees. 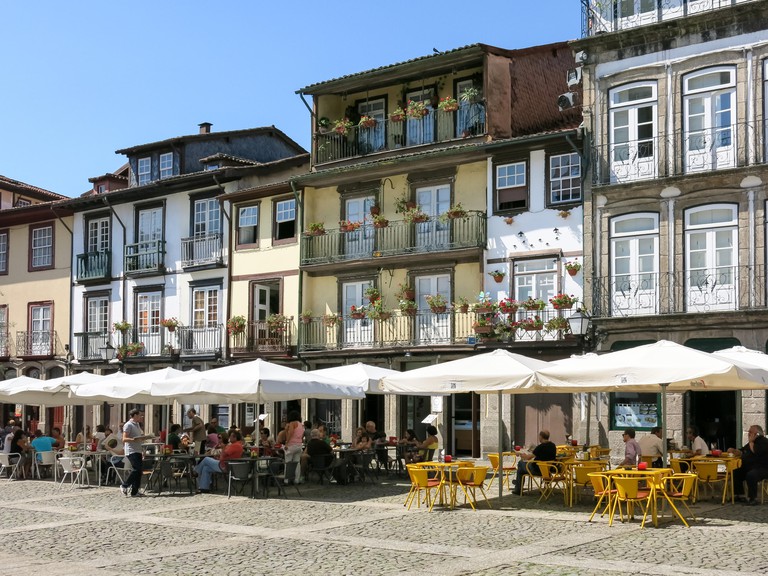 © Tasfoto / Alamy Stock Photo
Crumbling medieval archways intermingle with traditional 16th-century half-timbered houses and small gothic chapels in the historical city of Guimarães; no wonder it is on the Unesco World Heritage list, with such pristine architecture. Also crucial to its status is the role it has played throughout Portuguese history, particularly in the formation of the nation. It is the profusion of building styles that attracts visitors to the town – overlooking it all is one of the main attractions: the dwarfing Guimarães castle, one of the most impressive in the country, marrying romanesque and gothic features to magnificent effect. 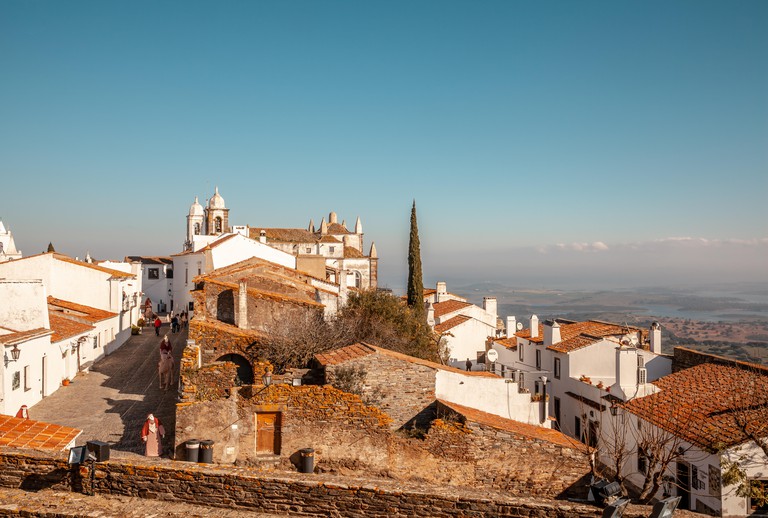 © Alice Dias Didszoleit / Alamy Stock Photo
Hard by the Portuguese-Spanish border, Monsaraz is a charming hilltop village surrounded by its original medieval walls and endless expanses of seductive landscapes. The area has been settled since prehistoric times, evidenced by remarkable megalithic monuments carved from rock. The periods of history it has experienced are manifest in everything from the fortifications built by the Knights Templar to the Moorish DNA in the town’s architecture. The undulating Mediterranean terrain all around is as picturesque as the town, speckled with silver-green olive groves, as the sparkling Guadiana River flows lazily by.

Historical Landmark
Facebook
Email
Twitter
Pinterest
Copy link
Share
This quaint hilltop outcrop has evolved over the ages from a small Roman settlement into a thriving town on Portugal’s Atlantic coast. It is a striking sight, surrounded by its original medieval walls – most visitors arrive through the head-turning city gate decorated with intricate tile work and paintings. Óbidos has, for the most part, retained an unspoiled, time-warped ambience: cobbled streets wind past white-facaded houses bedecked with fragrant honeysuckle and pillar-box red geraniums, leading you to the impressive Moorish castle crowning the town.

It’s continually growing – in fact it’s currently the second-largest city in Portugal – but Porto hasn’t let go of its nostalgic charm. You will still find, as you amble around, vivid buildings nudged up beside baroque mansions and crumbling medieval churches. Beneath the town, in places, lie the cellars that store the city’s world-famous export: port wine. Romance radiates from the city centre – from the period architecture and twisting narrow streets with glimpses of the riverfront – and it comes as no great surprise to learn that Unesco has anointed it with world heritage status. You can enjoy a guided culinary walking tour of Porto with Culture Trip by joining our specially curated small-group Portugal trip. 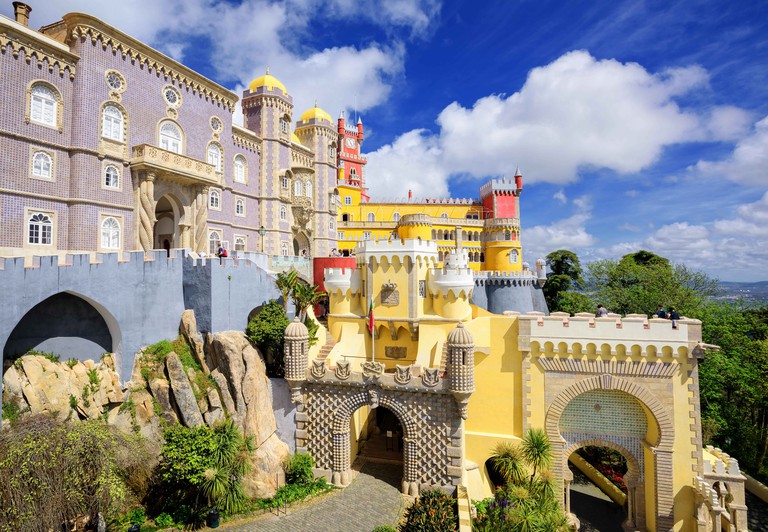 © Boris Stroujko / Alamy Stock Photo
Straight out of a fairy tale: that’s how everyone remembers their first glimpse of Sintra, the good-enough-to-eat town in the foothills of the Sintra mountains, where cliffs plunge dramatically into the Atlantic Ocean. It’s relatively small yet impressively endowed with castles and palaces, enhancing the magical air. With its turrets and battlements, the Castle of the Moors is a beauty to behold, poised on its hilltop. Or there’s the Pena National Palace, emblematic of the Romanticist revival that took place in Portugal in the 19th century. Take in its neo-gothic, neo-Renaissance and neo-Islamic styles, photograph its vivid palette, and plan, if you can, to stay longer in this whimsical resort town. 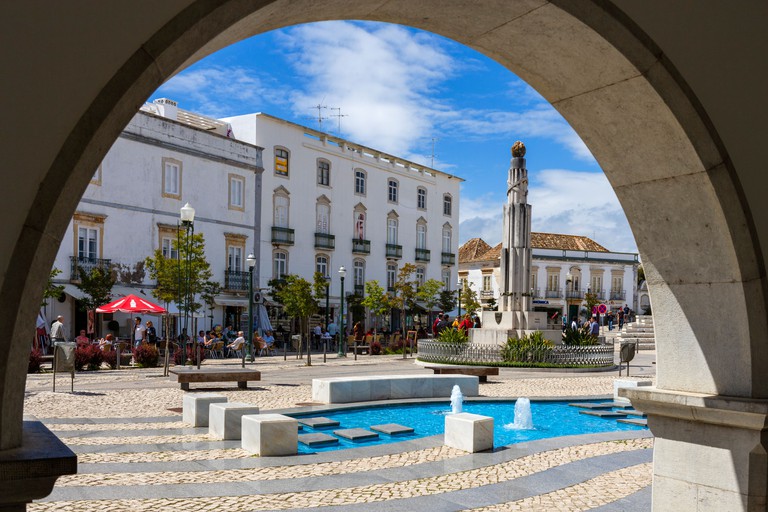 There’s something about Tavira, on the Algarve, that sets it apart from other Portuguese resorts; something about the crisp architecture, not to mention its historic roots traceable around town. A Moorish influence is abundantly clear – from the brilliant white homes with their iconic period archways, to the seven-arched Moorish bridge that links the two parts of the town. Tavira is much appreciated for the dazzling natural beauty that surrounds it, with soft, white-sand beaches sloping gently down to the warm, clear waters of the Atlantic Ocean. 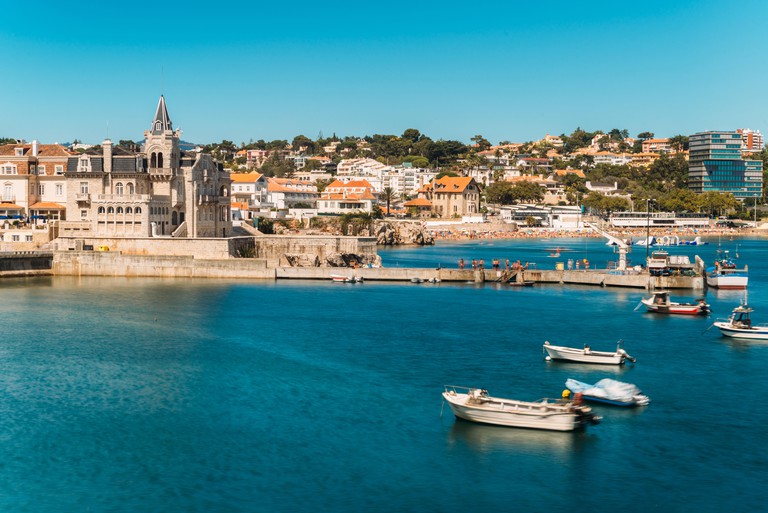 © Alexandre Rotenberg / Alamy Stock Photo
This former fishing village, 30km (19mi) west of Lisbon, is now a buzzy, photogenic coastal resort lapped by the Atlantic. But it retains plenty of small-town charm in its pretty, pastel-painted buildings and artisanal shops – take a wander in the old town, admiring the two-towered baroque church as you go. By day you’ll be able to bronze yourself on golden-sand beaches, breaking to lunch on sea-to-table treats by the shimmering marina. Expect to be spoilt for choice with local seafood, from octopus to sea bass, eased down with a glass of chilled Portuguese wine. It’s authentic Portugal with a cherry on top. 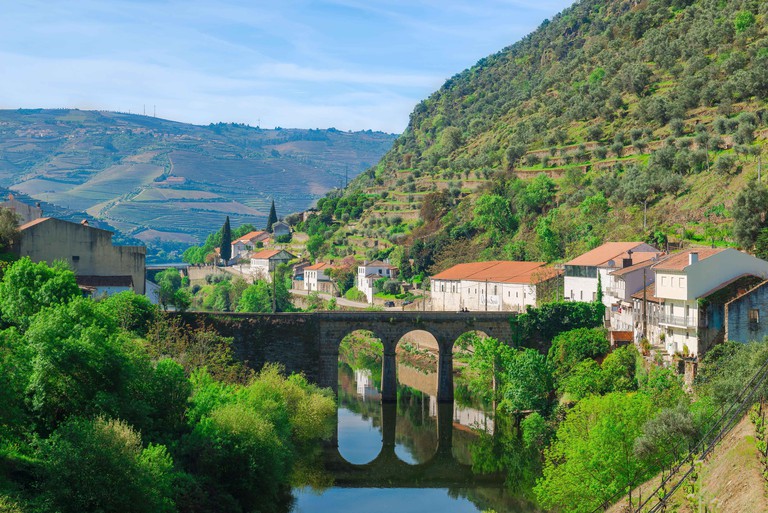 © Michael Brooks / Alamy Stock Photo
First things first: be sure to arrive by train just so you can admire the lovely blue-and-white tiles that adorn the station walls, depicting the practices of port wine production – the town is at the heart of Portugal’s wine-making region. It’s location, where the Douro and Pinhão rivers meet, is memorable, and for wine-lovers there are visits to picturesque 18th-century manor houses overlooking steeply terraced vineyards, and with plenty of tastings thrown in. The climate is as agreeable for visitors as it is for the grapes, all adding up to a perfect weekend-break destination.

Dominated by the pull of the Atlantic, this working port, an hour’s drive north of Lisbon, is loved for its world-class beaches and surfer-perfect swell – dudes love Praia dos Supertubos, famed for its perfectly hollow waves. Make time for a trip to the Berlengas Natural Reserve, just off the coast, home to a colony of puffins, with its surrounding waters rich in marine life. Local crafts are highly covetable, among them handmade lace known as Renda de Bilros (bobbin lace). And the produce of the sea makes for delicious regional stews and rice-focused aroz de marisco in the fish restaurants that enliven the harbour front. 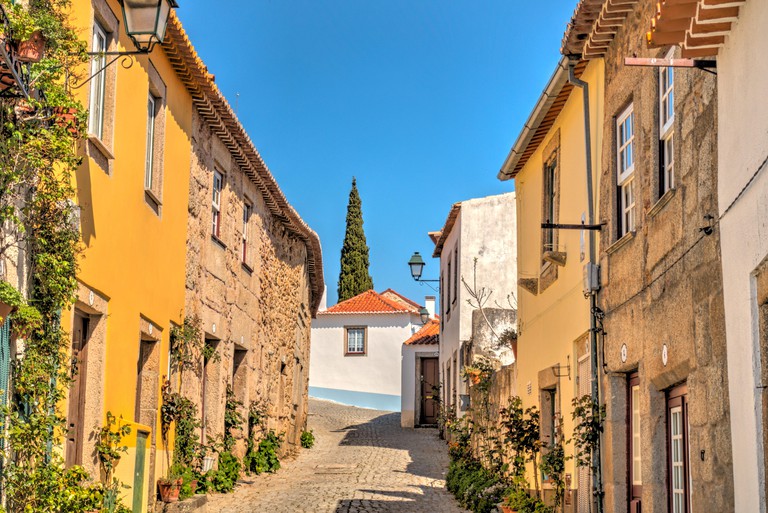 © Mehdi33300 / Alamy Stock Photo
Cocooned within the walls of a huge 17th-century fortress in the shape of a 12-pronged star, Almeida has history: a scant 12km (7.5mi) from the Spanish border, this inland village was once one of Portugal’s main strongholds, so take your time exploring the narrow streets and religious buildings of the ancient settlement. Top tip: if you’re here in August a three-day historical recreation of the Siege of Almeida is well worth watching.

At the far-western tip of the Algarve, slightly rugged but endearingly laid-back Sagres shares nature in abundance, whether you’re surfing in the challenging waters, whipped by the Atlantic winds, or sunning yourself on pale-sand beaches. Most restaurants are geared towards the surfers who flock here, and are dotted here and there slightly unconventionally. However, down by the port life becomes more traditional with small seafood restaurants beckoning you in to enjoy the catch of the day. Just outside the town, the dramatic Cabo de São Vicente headland is the most south-westerly point of mainland Europe. Marked by a scenic lighthouse, it’s an atmospheric, unmissable sight.