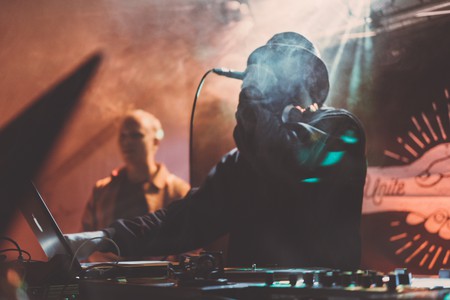 You may not be aware of it, but Portugal has a pretty cool hip-hop scene that’s deeply ingrained in its musical culture. Influenced by the country’s connections with African ex-colonies like Angola and Cape Verde, Portuguese hip-hop – also known as Hip Hop Tuga – developed in the 1980s and 90s alongside other Afro-Portuguese beats like Kuduro and Kizomba. It continues to grow and evolve, with established rappers known worldwide and new artists emerging every year. This list covers a few of the most popular musicians that every hip-hop fan should know.

Portuguese record label AVNL Records is one of the pivotal players in releasing electronic and underground hip-hop, spearheaded by Old Manual and two of his musical peers, Rap/Rap/Rap and Marie Dior. Old Manual – also known by his birth name Manuel Robim – is one of the rising stars on the scene, creating his own music with a focus on digital beats. Currently based in London, he can still occasionally be seen DJing at a Lisbon-based venue. A little different from traditional hip-hop, Old Manual is part of a new wave that mixes various styles with heavy electronica.

Blending hip-hop, R&B, soul and reggae, Expensive Soul are a duo hailing from Leça da Palmeira Portugal, a coastal town north of Porto. After honing their sound for many years, their debut album B.I. was a breakthrough record, while its follow-up, Alma Cara (Expensive Soul), built on that success. Digital releases of Amor É Mágico (Love is Magic) and Dou Te Nada (I Give You Nothing) from their third album became fan favourites, the former being used as the theme song for a Portuguese television soap opera, adding to its national fame.

Born in Lisbon, Valete’s musical style has been inspired by politics as he spent some years moving around the city and its suburbs. Starting his recording career age of 16, Valete – real name Keidje Lima – took an educational break to get a degree in economics, returning to the music scene and independently releaseing his debut album, Educaçao Visual (Visual Education). In 2006, Valete’s second album was listed as one of the best in the genre. Currently retired from professional performance, he has become known as one of the leading figures in the development of Portuguese hip-hop.

Dealema, now veterans of the scene, first formed in Porto as a collaboration of two projects, Factor X (Portugal’s X-Factor) and Fullashit. They have been rapping since the 1990s and produced six albums. Their last album Alvorada da Alma (Dawn of the Soul) features other hip-hop artists, including a few from outside of Portugal. Dealema are still one of the biggest draws for hip-hop fans, appearing at the country’s major festivals such as Super Box Super Rock and MEO Sudoeste.

Born in Cape Verde, Boss AC has lived in Portugal since moving to Lisbon as a teenager. One of the most popular Portuguese hip hop artists to break through internationally, he recorded his debut album Mandachuva in the USA and continues to work in Brazil. Although considered a solo artist, he often collaborates with other musicians from the international hip-hop scene, including Portugal’s fado superstar Mariza. Among his hits are Dinero (Money) and Doa a Quem Doer (Whoever it Hurts).

Last but not least is Sam the Kid, real name Samuel Martins Torres Santiago Mira. Born in Lisbon, he has been creating music since 1994 when he was just 15 years old. Releasing his debut record in 1991, it was third album Beats Vol. 1: Amor in 2002 that made his name. Among his most popular songs are Retrospectiva de Um Amor Profundo (Retrospection of a Profound Love) and Sophia.