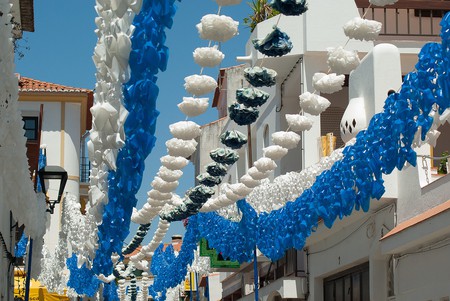 No matter the season, there is always a festival taking place in Portugal, and the locals sure know how to throw a party. Among the most well-known events are the outdoor concerts and Popular Saints Festivals, especially those in Lisbon and Porto, but there are plenty of others to experience and enjoy. Many celebrations center around religious events, a couple of them pertain to myths and legends, and a few are organized simply for the sake of fun (well, they’re all fun). There are plenty of events to check out in Portugal, but the following festivals are among the best.

Is it possible to find a cooler spot for a medieval fair than in front of a castle in a city within fortified walls? From mid-July to early August, head to one of Portugal’s most charming medieval cities for jousting, knights, a medieval market, and multiple shows. Try the meats, the wine, and the cheeses while sipping simultaneously on the local ginja, a cherry-flavored liquor. Not only will you walk away with many unique memories but maybe a few souvenirs as well. 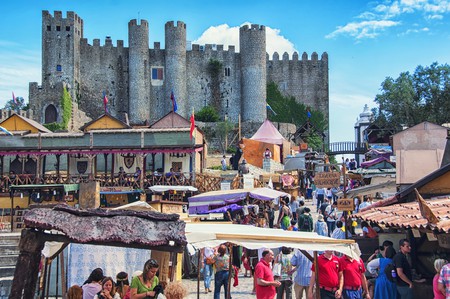 Pretend like you traveled through time at the Obidos Medieval Festival. | © Madrugada Verde / Shutterstock

Are you planning on visiting Óbidos earlier than mid-summer? Head over during the spring for a tasty experience. The Óbidos International Chocolate Festival is the place for chocolate lovers between March and April and includes a cooking class and tastings. 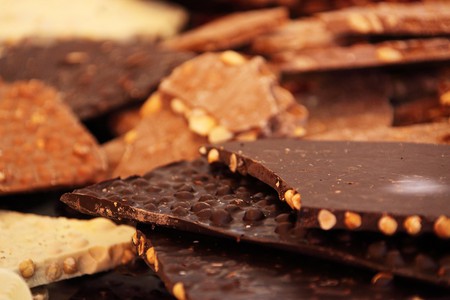 Festival of the Crosses in Barcelos

The story goes that the concept for the Festival of the Crosses, or the Festival das Cruzes in Portuguese, started when a large cross appeared on the ground in front of a villager. Seen as a message from the heavens, it sparked this yearly springtime festival that over time transitioned from purely religious to cultural and entertaining. The Festival of the Crosses includes music, folk dances, food, crafts, and storytelling. Perhaps while visiting, a local can tell you the entire story of the cross’s apparition, in addition to the legend of the Barcelos Rooster, which is another popular narrative from the same area.

The greatest celebration of contemporary art in Portugal is hosted primarily during June at the country’s largest and most important contemporary art museum. Mostly organized in the beautiful estate of the Serralves Foundation in Porto, the festival runs for two straight days and celebrates all forms of art from literature and cinema to painting and sculpture, as well as the musical arts. The festival’s reach stretches across Porto as well, and some events run in the city’s historic downtown.

Festival of the Trays in Tomar

Known in Portuguese as the Festival dos Tabuleiros, this event has occurred once every four years since the 16th century, so plan accordingly. Although it’s a religious event dedicated to the Holy Spirit, bread and flowers are the major attractions, and local girls walk through the city with trays of each on their heads. Taking place in Tomar at the beginning of July, the Festival dos Tabuleiros is as much a visual feast as it is cultural and spiritual, and the next event is scheduled for 2019. 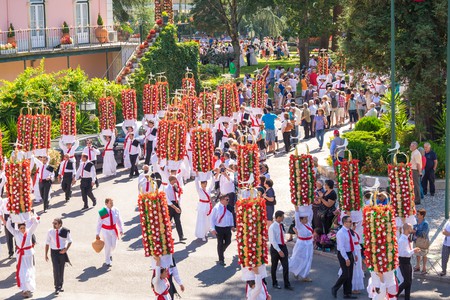 If you can’t visit Brazil during Carnaval (and plan on being in Europe), then head over to Portugal. The entire country comes alive with street parties, but a few of the best happen in Torres Vedras (north of Lisbon), Bragança (in the northeast), and Loulé in the Algarve (which hosts one of the oldest-running Carnaval parties in Portugal). 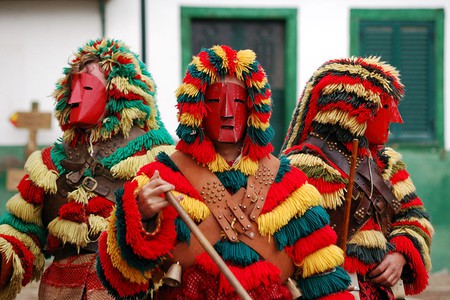 In northern Portugal, men and boys dress in Caretos costumes for various festivals, including Carnaval and the Festival dos Rapazes | © Rosino / Wikimedia Commons

Boys will be boys, and around Christmastime in northern Portugal, that means dressing in wild costumes and running around causing innocent mayhem. In a way, the Festival dos Rapazes, or “Festival of the Boys,” is a sweet 16 celebration for young men, celebrating their passage from childhood to manhood. Dressed in masks, colorful costumes, and bells, the boys run around town playing music, singing songs, and playfully teasing passersby. Many of the most popular festivities occur in the Tras-os-Montes region in northeast Portugal.

Eating is one of the best things to do in Lisbon, and the festival known as Fish and Flavors is an experience that may top foodie charts. The festival, which occurs yearly during the early spring, asks chefs and restaurants from around Portugal and the world to share their favorite finfish and seafood recipes. Among the culinary minds invited are a few of the country’s top Michelin five-star chefs. 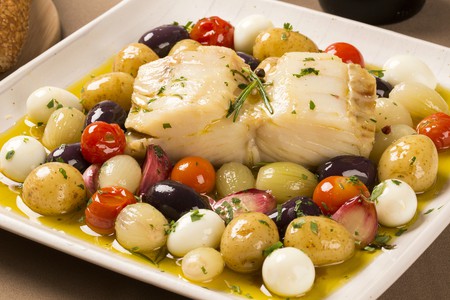 The end of summer is never easy, but Portugal bids the season farewell in a classy and fun way. Noite Branca, meaning the White Night, is exactly what it sounds like—a street party where everyone dresses in white. Actually, your outfit is your ticket as the entrance is free, and the only entry requirement is following the dress code. Music, dancing, food, and performances take place the entire time, which in Braga means 48 hours of fun.

Festas do Espírito Santo in the Azores

The Azores are full of unique events, but the Festas do Espírito Santo in Ponta Delgada is perhaps among the most colorful. It’s also the biggest religious event on the islands, taking place five weeks after Easter Sunday. Flowery mosaics decorate the major walkways, and along with a parade, there are a variety of booths to visit and a fair. This event is also one of the easiest to visit since the Ponta Delgada Airport is one of the main entryways into this beautiful archipelago.