Portugal has never really competed with the hot shots of European cinema like Italy, France, Germany and Scandinavia, and despite a thriving local scene few Portuguese films are exported overseas. This is changing with director Miguel Gomes, whose films are making waves in international art house circles. 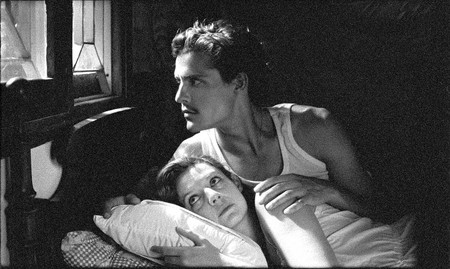 The most successful films shot in the Portuguese language usually come from their cousins across the waves in Brazil; City of God and Central Station being prime examples. Since 2004 however, Portuguese writer-director and former critic Miguel Gomes has made an enigmatic trio of feature length films, all making a statement about his cinematic credentials, which have started to put Portugal on the cinematic map.

Exploding onto the scene in 2004, Gomes’s debut feature The Face You Deserve takes its name from the expression ‘until the age of 30, you have the face that God gave you; after that you have the face you deserve’, which gives an impression of what to expect. A motley crew of seven middle aged men live together in a cottage deep in the woods. A little more than childlike, they engage in a sort of Peter Pan’s lost boy’s existence. Refusing to grow up they occupy themselves with ritualistic games and charades, embracing life as they have made it, detached from the outside world.

Musical pastiches are key to Gomes’ storytelling and are evident in his early series of short films in which he tested the boundaries of his own creativity. The Face You Deserve continued this trend, while ushering in a new and distinctive voice amidst Europe‘s auteur community.

For Gomes’s second feature he produced a free flowing documentary/fiction crossover, focusing on semi-fictional characters in rural mountainous Portugal during the hot and hazy month of August. Gomes and his incompetent crew occupy one strand of this multifaceted story and while a linear plot is difficult to discern that doesn’t make the film’s meandering turns any less satisfying.

Music festivals, quaint village parties and customary dances, ‘river jumping,’ karaoke nights and emigrants in full holiday mode all flit under the camera’s spotlight, all of whom are treated with clear affection by Gomes. Genuinely endearing and often hilarious, Our Beloved Month of August is a film for all seasons.

Gomes’s triumphant masterwork Tabu was an entrant in the 62nd Berlin International Film Festival where despite not winning the top prize it was highly acclaimed. Shot entirely in crisp black and white, Tabu turns the camera on elderly veteran gambler and slot machine addict Aurora (Laura Soveral). After falling ill and taking on the care of her staunch Catholic neighbour Pilar (Teresa Madruga), Aurora begins to have reveries about her younger self in 1970s Portuguese Mozambique and her wanton love affair with a young man named Ventura (Carloto Cotta). A film about lost love, the precariousness of youth and a poetic meditation on the fleeting nature of time, this film marked Gomes’ emergence as an international talent to watch. A remarkable piece of filmmaking suffused with beautifully eclectic direction and Gomes’ idiosyncratic surreal and dark touches.

Gomes’ emergence marks a shift in the international recognition of Portuguese cinema, which, if his rise continues, will hopefully put the spotlight on some of the lesser known classics of Portuguese film.