Évora © Pixabay
A highlight to spending time in Portugal is the ease of traveling around the country, and no city is a better starting point than Lisbon. Between the airport and many train stations, the rest of the country feels like a hop, skip, and jump away.

Tourists usually mark Lisbon on their European travel bucket lists and the city offers plenty of attractions to keep most curious minds entertained. Spend a few days talking to fellow travelers and locals, however, and you may notice a growing desire to see more of Portugal. Why not follow your instincts? Here are the best weekend getaways from Lisbon.

Let’s start with the least obvious city. Although Porto is located in the north of Portugal, it’s a short 1-hour flight or 3-hour drive from Lisbon. Plan in advance, and airlines like RyanAir may sweeten the deal with flights as low as €30 (or less). Since it is the second largest city in the country, there is a lot to do and you may feel that one weekend isn’t enough, but it’s plenty of time to see the main landmarks, try the local cuisine, and whet your appetite to return for more. Try the famous Francesinha sandwich if you’re not afraid of a meat-based calorie bomb, discover the city’s azulejo art with a walking tour, take photos of (and from) a few of Porto’s emblematic bridges, and sip sweet Port wine or crisp Vinho Verde (green wine) from the local wineries.

Cathedral, Museum
Vineyard in Alentejo region, Portugal. | © Glen Pearson / Alamy Stock Photo
Book Now
Why not spend a weekend away from the crowds to experience the backcountry of cork trees, vineyards, and rural towns? Alentejo is a vast, farm- and vineyard-covered rural region that spans roughly one-third of Portugal, but it is unfortunately often overlooked as a tourist destination. Visit these quiet towns if nibbling on cheese and bread while sipping smooth wine and tasting some of the best cuisines in Portugal sounds like heaven. Alentejo is also home to Évora, a medieval town that has been marked as a UNESCO World Heritage Site. This entire town is a museum, and a few key features include the 18th-century Sé Cathedral, the Temple to Diana (possibly constructed in the 1st century), and 16th-century Capela dos Ossos (Chapel of Bones).
More Info
Open In Google Maps
Portugal
View menu
Visit website
Visit Facebook page
Send an Email
Give us feedback

University, Library
Coimbra University | © Pixabay
A riverside city painted with a rainbow of oddly-sized homes that cascade down hills sounds pretty familiar in Portugal, but Coimbra is unique compared to its two larger cousins. It’s not the oldest city in the country (that’s Braga) but it does have one of the oldest universities in the world. The University of Coimbra and its library, the Biblioteca Joanina, are one of the main attractions, and the library has been named among the most beautiful libraries in the world. Explore the excavated ruins and preserved mosaics at Conimbriga, and if you’re traveling with children, take them to see Portugal dos Pequenitos(Portugal of the little ones), which is a theme park where Portugal’s main landmarks have all been shrunk down to the scale of children.
More Info
Open In Google Maps
Coimbra, Coimbra, Portugal
View menu
Visit website
Visit Facebook page
Send an Email
Give us feedback

A little closer to home (or Lisbon) are Cascais and Estoril, two neighboring and primarily resort-based cities along the Portuguese coast. Cascais was once a fishing village that served as a lookout for seafarers, but its natural beauty and equally attractive climate attracted royal attention. From that time, these two cities grew into the trendy and sophisticated beach-inspired getaways that they are today. Visit Estoril Casino, one of the most impressive casinos in Europe, or the rumbling Boca do Inferno (which translates to “Hell’s Mouth”) where the waves crash against rough cliffs and a small cave. 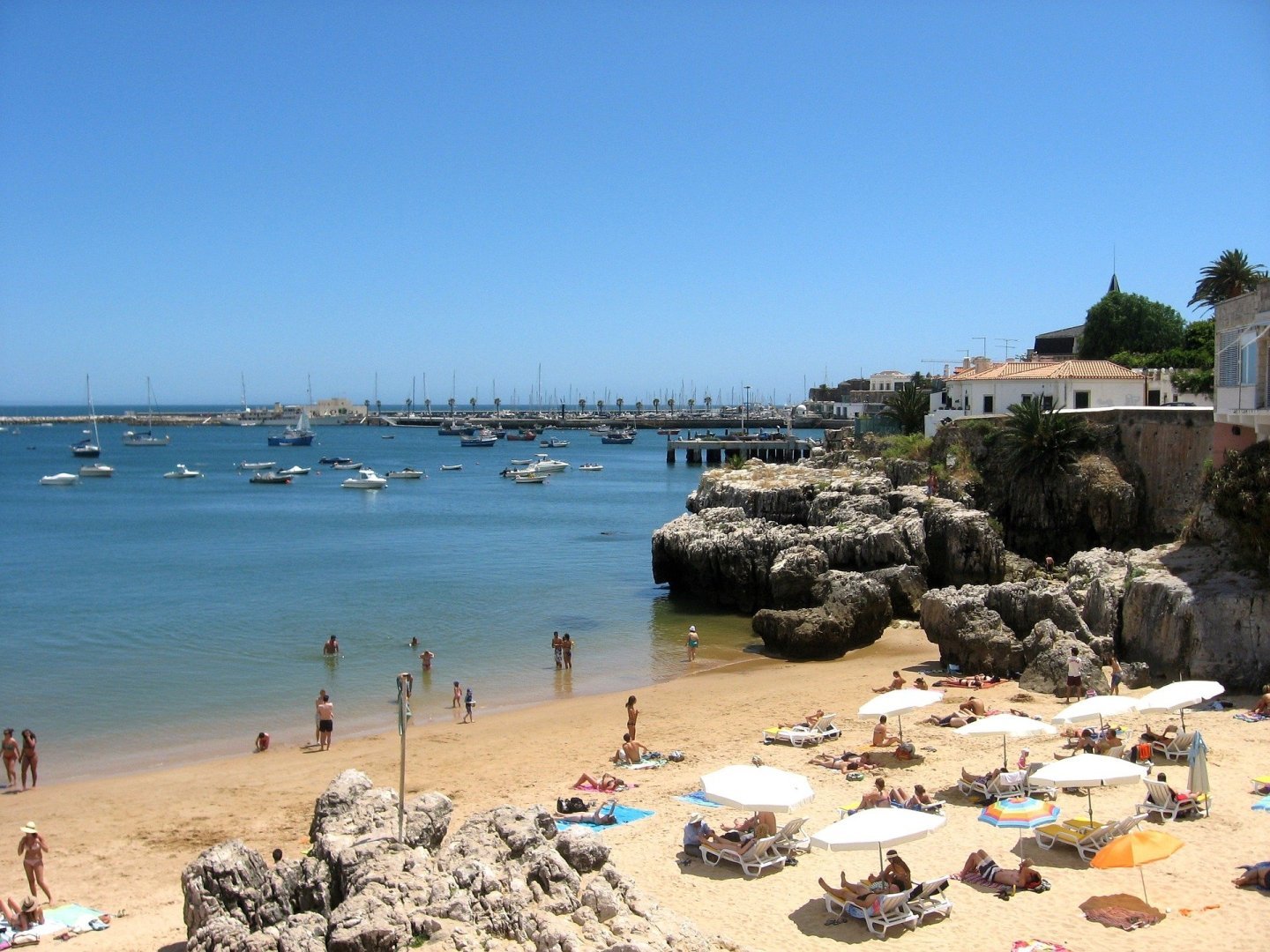 Sintra is one of those places you see in the pages of travel magazines and think, “One day, I need to go there.” From Lisbon, jump on the train at Rossio Station and in 40 minutes you’ll be in one of the most mesmerizing towns in the world. The green mountainous woods offer plenty of hiking paths and the city is a mecca for architectural masterpieces. Visit the eerily charming Quinta da Regaleira and its dark wells and caves, walk through the jaw-dropping Pena Palace, and visit the beautifully ornate Monserrate Palace. Head towards the coast to the westernmost point in continental Europe called Cabo da Roca and take a photo by its iconic lighthouse. Traveling to Lisbon and missing Sintra would be a tragedy.

If whitewashed cottages covered in colorful flowers, charmingly eclectic souvenir shops, castle walls, and book-themed locales pique your interest, consider spending the weekend in Óbidos. This is a town that has attracted attention for its beauty and the fact that it is haloed by medieval castle walls. If you visit, pay special attention to the Porta da Vila, the gated entrance that’s covered in traditional azulejo tile art, and taste the cherry liqueur called Ginja de Óbidos. Usually, this town makes for a great day visit, since it’s easy to soak in within a few short hours. If you want to turn a visit into a weekend event, however, consider staying at the Literary Man Hotel (which is covered from the floor to ceiling in books) or at the Pousada Castelo de Óbidos (a 700-year-old castle).

Since we began with the least obvious location, we’ll end with the most obvious one. Algarve is one of the most popular spots in Portugal, due to its white expanses of sandy beaches, energetic nightlife, fresh seafood, and opportunities for immersing in nature. The buses and trains leave from Oriente Station and arrive in Algarve within two and a half to three hours, depending on your final destination. For dramatic cliffs juxtaposed against sparkling blue water, visit Camilo Beach in Lagos. If trendy and music-thumping clubs are more your style, Vilamoura is the place to go. Faro is the capital of Algarve and blends traditional Portugal with the more typical resort aura expected from Algarve.

Camilo Beach, Algarve © Natalia / Flickr
Book with our partner and we will earn a small commission.
Give us feedback