Lisbon's Best Craft Beers and Where to Find Them 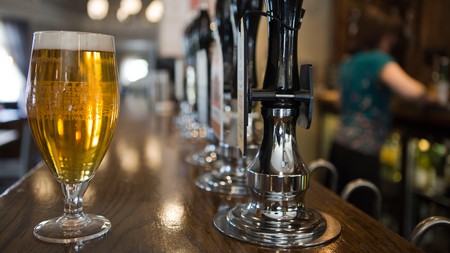 Emerging in the 2010s from decades of two-beer domination (Sagres and Super Bock), Lisbon is finally embracing the Hop Revolution. Dois Corvos co-owner and head brewer Scott Steffens gives us the lowdown on the city’s best craft taps.

For most of the 20th century and beyond, Portuguese beer meant Sagres and Super Bock – two industrialised lagers that do little to quench the thirst of more sophisticated beer palettes. By 2014, the taps opened with the arrival of Cerveteca Lisboa, the city’s first craft beer bar, followed a year later by Dois Corvos, Portugal’s best microbrewery and first tap room. With the help of the latter’s co-owner and head brewer Scott Steffens, Culture Trip surveys Lisbon’s distinct, ever-changing cerveja artisanal landscape.

“Lisbon‘s scene is unique for two primary reasons – Portuguese breweries have a lot of great barrels to choose from for ageing and developing complex flavours in Port, Moscatel, Abafado and other local barrels,” says Steffens, who brews some of the country’s best and most experimental brews. “The second reason is the atmosphere – it’s so laid-back, and the people that comprise the local beer community are genuine.” 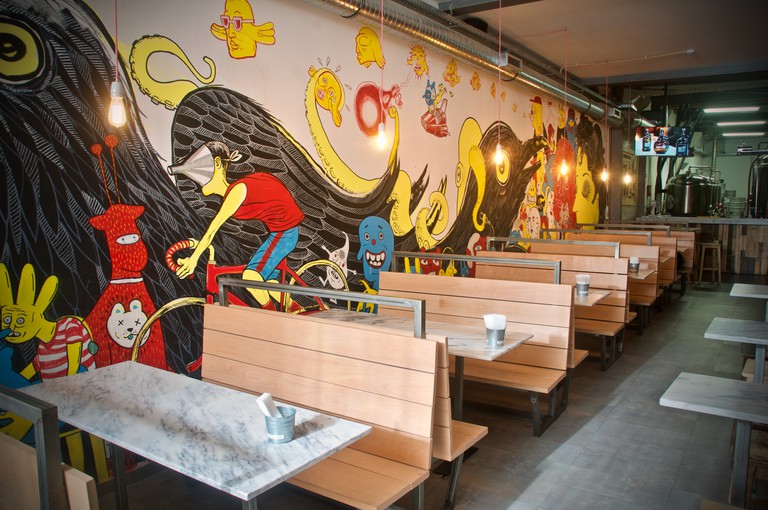 The 18-draught tap room at Dois Corvos – Portugal’s most dynamic and experimental microbrewery – started as a humble, neatly makeshift spot to drink the brewery’s fresh, hop-heavy IPAs and barrel-aged stouts and porters. A few years in, it remains unpretentious but has evolved into an artsy, bohemian-leaning hop haven that’s worth the trek to Marvila some five kilometres (three miles) northeast of the city centre. “Dois Corvos was the first tap room in the country, and we opened it in 2015 with the goal of helping to build the fledgling beer community in Lisbon,” says Steffens, who brews with a team of Portuguese, Polish and multinational transient brewers. “It’s where beer lovers and home brewers and the mechanics next door all come to meet for a beer or a quick growler-fill.”

Located on pretty Praça das Flores in one of Lisbon’s most happening neighbourhoods (Príncipe Real), Cerveteca’s was the city’s first craft beer bar and remains one of its best. “Cerveteca has led the way and set the bar high,” says Steffens. “I have no doubt that countless Portuguese beer lovers had their first craft beer at Cerveteca. It’s a place the Lisbon beer community comes together.” Owners Rui Matias and Carolina Cardoso and English-speaking staff are consummate hosts and beer lovers, curating 14 taps (two of which are hand pumps), often split between Portuguese and European/North American craft. 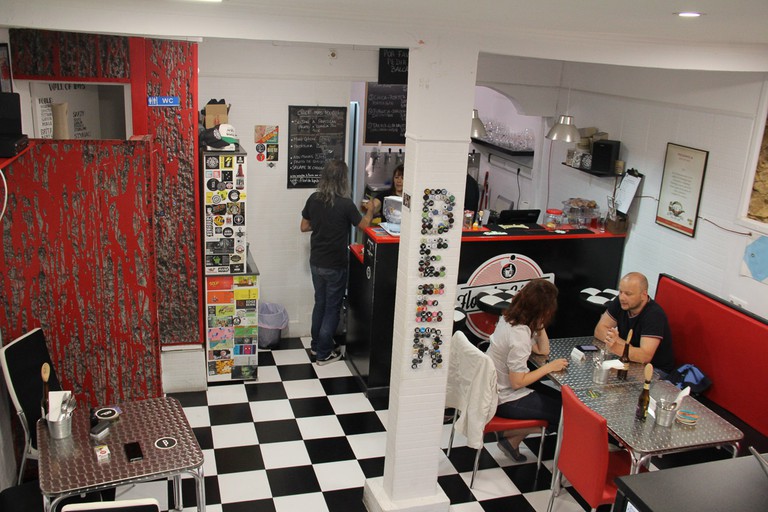 The little craft beer bar that could – Flor de Lúpulo has more taps (10) than seats at their tiny bar just 300m from Arroios metro station. Though the slightly jarring American-diner-style decor and a punk rock soundtrack may not please all palettes, their meticulously curated tap list should. “This is my local hangout run by a wonderful staff,” says Steffens. “A mix of local brews and beers made from faraway places. It’s a local crowd here, away from the tourist centre, with some light meals including vegetarian plates.”

Lisbon’s debut brewpub sits midway along an atmospheric staircase, perfectly positioned to offer a cold pint to both beer lovers and those simply tired of pounding the city’s up and down pavements. “There’s no better sidewalk in Portugal,” reports Steffens. “I love sitting in their esplanada and watching the crowds walk up and down the wide walkway which connects Bairro Alto above to Rossio below.” Twelve taps deliver Portuguese-only beer, several of which are brewed in-house, and there are good tostas (Portuguese toasted sandwiches) to soak up the hops. 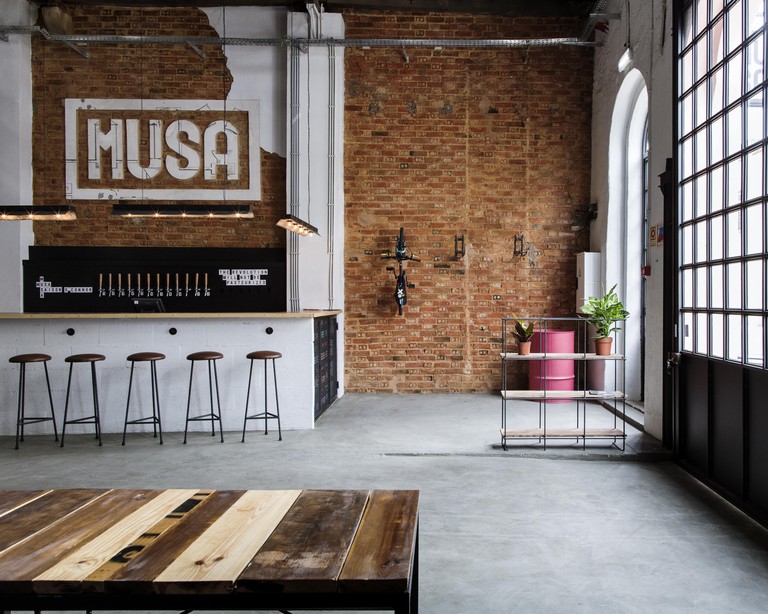 This upstart brewery, also located in Marvila (which means it pairs nicely with Dois Corvos on a brewery crawl), specialises in safe, true-to-style beers with clever, rock-and-roll-pun names like Born in the IPA and Mick Lager. The industrial-hip space features two floors and often hosts live music and DJ sets. A second, more food-focused space opened in more central Bica in 2019 with 15 taps and a chef from Michelin-star Feitoria at the stove. Either location is a perfect spot that serves as an easy-drinking gateway between Portugal’s industrialised lagers and its more experimental-driven craft scene.

Alfama-adjacent Outro Lado is this storied Moorish quarter’s one surefire drinking den for connoisseurs of craft, sitting somewhat clandestinely in the back alleys near Sé Cathedral. Here an Egyptian-Polish couple acquired and made over the formerly lackluster LisBeer in 2018, giving it new life with lounge-style furniture and, more importantly, a European- and North American-heavy, 200+ bottle list that sees appearances from breweries unseen elsewhere in town (as well as 15 taps). “This hidden gem has a great, curated tap list with hard to find beers from all over the world, knowledgeable and friendly staff on a quiet corner of a historical neighbourhood,” says Steffens. 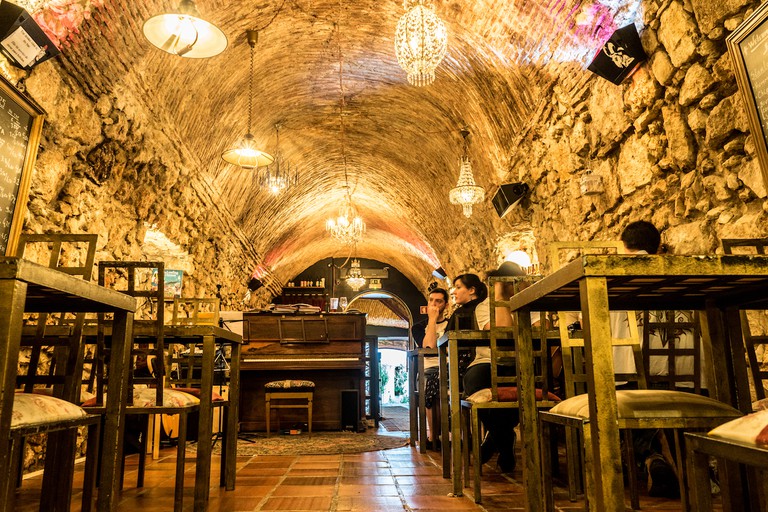 Chimera is set in an 18th-century former carriageway | © Rao Godinho

American F&B ace Adam Heller, along with his amicable Brazilian sidekick, Raquel Nicoletti, are the glorified homebrewers at Chimera’s cinematic space, set inside the stone-walled 18th-century carriageway that once led horses to the Palácio das Necessidades in Alcântara. American-style bar food such as Reuben sandwiches and kimchi brats are often chased with barrel-aged sours, the ever-popular NAFIPA (Not Another Fucking IPA!) and other evolving concoctions brewed in the basement below (the 12 taps are shared with other Lisbon brews).

With a postcard-perfect view of São Jorge Castle from its bar stool-lined window in Graça, Oitava Colina boasts big city drinking views in a small-town space. The brewery is well known for producing one of Portugal’s workhorse IPAs (Urraca Vendaval), and their one-off brews often feature Lisbon-centric themes. International pub grub is served in the intimate space as well – think pulled pork, banh mi sandwiches and the like. 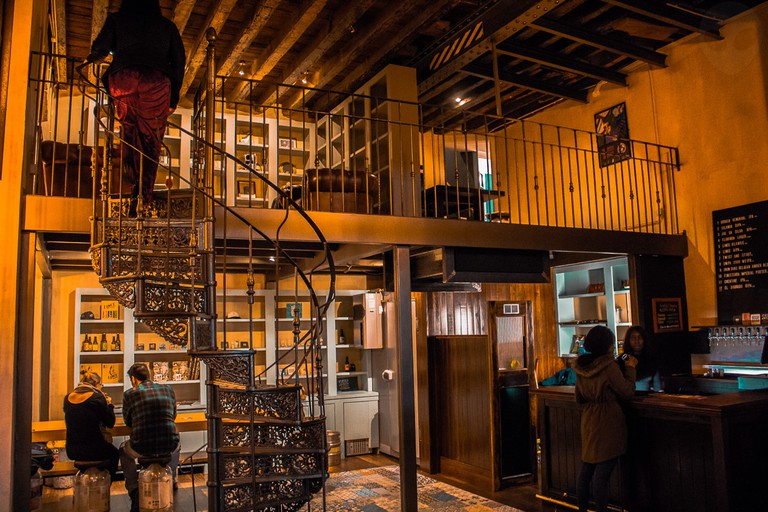 True to its name, Crafty Corner occupies a well-positioned corner in Lisbon’s liveliest nightlife district, Cais do Sodré. But unlike the surrounding, tourist-driven watering holes, this beautifully designed loft-style space offers 10 taps dedicated to Portuguese craft only. The Irish owners are longstanding bar hounds in Lisbon, having successfully operated an Irish pub nearby for decades. “Crafty Corner has great service and a Portuguese-only beer selection,” says Steffens. “An unbeatable location and a huge wall of windows that open up, so you feel like you’re hanging out outside.”