Leading Portuguese contemporary artist Joana Vasconcelos talks to Culture Trip about crafting the future, re-appropriating domestic materials, and how art can be a catalyst for change. 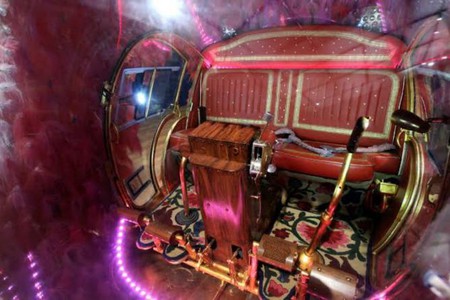 Joana Vasconcelos is as eloquent as she appears demonstrative when discussing her new exhibition Time Machine, at Manchester Art Gallery, in the UK. Her impassioned ambition and persuasive charisma take hold of your imagination in the measured time it takes her to guide you through the survey show in which the seasoned artist inter-mingles her world of fluorescent colours and patterned materials with the existing historic artworks from the gallery’s permanent collection. She has exhibited extensively, including at the Palace of Versailles in 2012, and at the Venice Biennale in 2013, where she represented Portugal. Born in Paris in 1971, Vasconcelos attended the Centro de Arte e Comunicaҫão Visual in Lisbon in the early 1990s. Following numerous exhibitions across Europe, her first retrospective show was held in 2010 at the Museu Coleção Berardo, Lisbon. Hers is a kitsch universe with a sobering message, in which traditional female objects and craft techniques are put to playful use as signifiers for a different vision of the world. And as she explains here, ‘when familiar objects re-appear in new contexts, their meanings can change, and by changing meanings we can adapt our conceptions and in turn our future directions’. 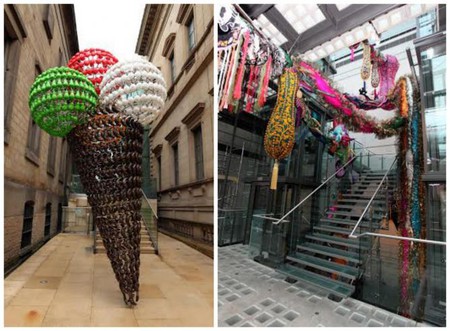 For an audience less familiar with your work, can you explain your practice and approach?

I am inspired by everyday life and my perspective is led by a critical observation of the world around me. My creative process is based upon the appropriation, decontextualisation and subversion of pre-existent objects and everyday realities. I’m oriented by my condition as a woman and as Portuguese but always thinking in global terms. I re-frame the global through the local, in the sense that I work with various traditions and techniques that can be identified as Portuguese, such as crochet, but they are in fact found all around the world. Re-working these items and resorting to everyday objects, such as cooking pans, is part of my conceptual language because I believe these carry with them an impressive potential for signification. We think we know them well but these can always acquire a new signification and existing meanings can be challenged to serve concepts or to question the world. 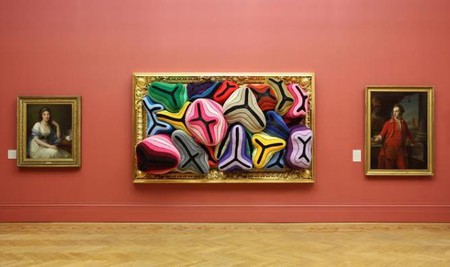 Do you define yourself using words such as artist, sculptor, ceramicist, or interventionist, and are such definitions important to you?

I am all of those except for a ceramicist, although I do sometimes work with ceramics. These definitions were very important when exhibiting in Versailles and Venice as both projects were artistic interventions over pre-existent areas. In Versailles, both inside and outside the palace, I placed my contemporary works in dialogue and confrontation with the different spaces, decorations, themes and histories. 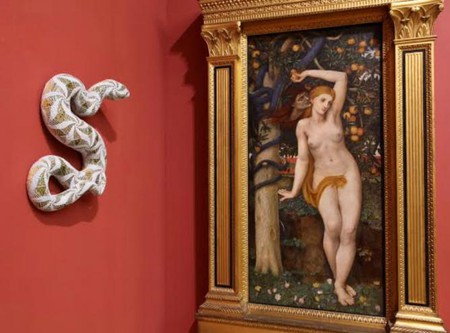 Trafaria Praia, my floating pavilion and total work of art for the 2013 Venice Biennale, involved turning a typical Lisbon ferryboat – a cacilheiro – into the Pavilion of Portugal. The exterior was covered with a panel of azulejos (tin-glazed, blue and white, hand-painted ceramic tiles) that reproduced a contemporary view of Lisbon’s skyline, while on the ship’s deck I made an environment of textiles and light. This has been my ongoing style, to install organic and often colourful forms hanging from the ceiling so they interact with the surrounding architectural elements. My latest piece is a medley of blue-and-white fabrics all over the ceiling and walls, from which crocheted pieces, intertwined with LEDs, emerge. The installation suggests a surreal and womb-like atmosphere, like you are under the sea. My work can also be taken as interventional from a political point of view as I represent and subvert the symbols, objects, and behaviors of contemporary society to generate different discourses that the viewer can layer over reality. Interventional installations, like those I made in Versailles and Venice, can be read as acts of subversion as they occupy historic spaces of wealth and power, implying conceptual transformations through the physical transformations they manifest. 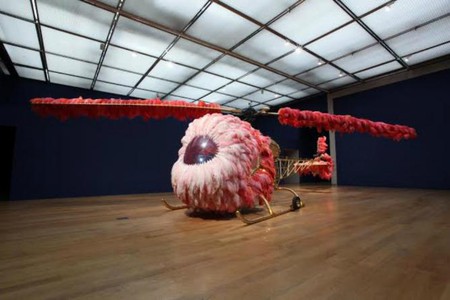 Can you talk about how you de-contextualise or subvert everyday objects?

I do that through appropriation and by using those items in unexpected ways – like steam irons to create fountains (Full Steam Ahead series) or perfume flasks turned into lamps to make a huge bow (J’Adore Miss Dior, 2013). Everyday items and objects have a great capacity for signification. We can make various readings of them using association and collective memory. Of course the objects used are chosen for the symbolism they carry, but each culture and person also carries a particular way of looking at these objects and makes their own associations, which brings each work a variety of possible readings. My works don’t close themselves in upon a single discourse or interpretation. They are ambiguous, paradoxical and dichotomous, and I believe the richness and value is in this multiplicity of possible interpretations and readings. 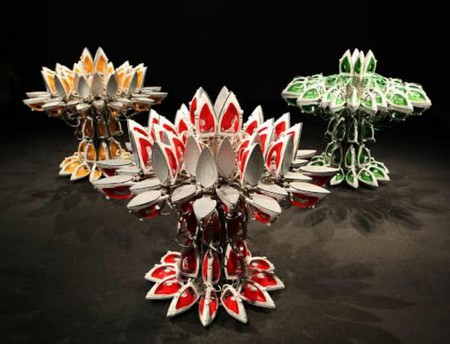 How important is humour in your work?

Humour comes naturally to me but I am perfectly conscious that humour is in fact a serious thing and an excellent means of communication. The questions my work poses seek to broaden people’s perceptions of the world and humor is a great instrument for this.

What did you want to achieve with this show? Why did you install works throughout the galleries as interventions?

The museum’s collection is composed of works from the past but that make sense today and my contemporary works talk to them so that a dialogue is created between past and future. All my work looks, in fact, both back and forward, as a bridge. The crises we are living through force us to think about our roots and what we should preserve for a future that isn’t looking very bright. It’s in these moments that we activate the ‘time machine’ in our minds. I believe artists can have a catalytic effect as they offer an imaginative filter that allows people to search for identity – not only for who we are but also who we want to be. With this in mind the central themes of recycling and renewal came naturally. 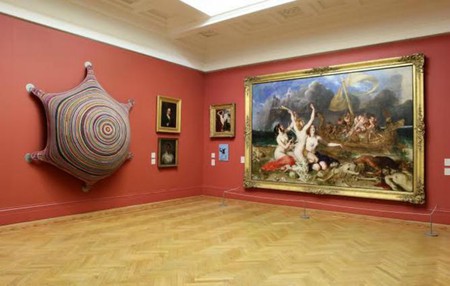 Finally, what does the rest of the year hold for you?

2014 began quite intensely with this show and two exhibitions in São Paulo – Casarão at Casa Triângulo and my site-specific work Amazônia for the Pivô space at Oscar Niemeyer’s Copan building. Up next I have exhibitions in Ireland, Berlin, China and then Brazil again. I will be busy.