The Best Hotels in the Azores, Portugal 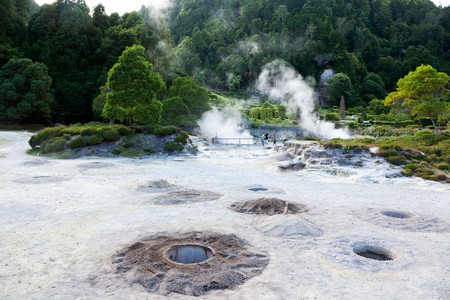 Stay near the natural hot springs in Furnas, São Miguel, at one of the best hotels in the Azores | © Oliver Hoffmann / Alamy Stock Photo

With whale-watching trips on Pico, dips in hot springs in Furnas, and waterfall walks on São Miguel, holidays to the Azores off the coast of Portugal aren’t fast forgotten. Neither are the archipelago’s hotels. Some of the top options come with indulgent spas, in-room jacuzzis and wide-angle views of the ocean. Here are a few of the finest, bookable on Culture Trip. 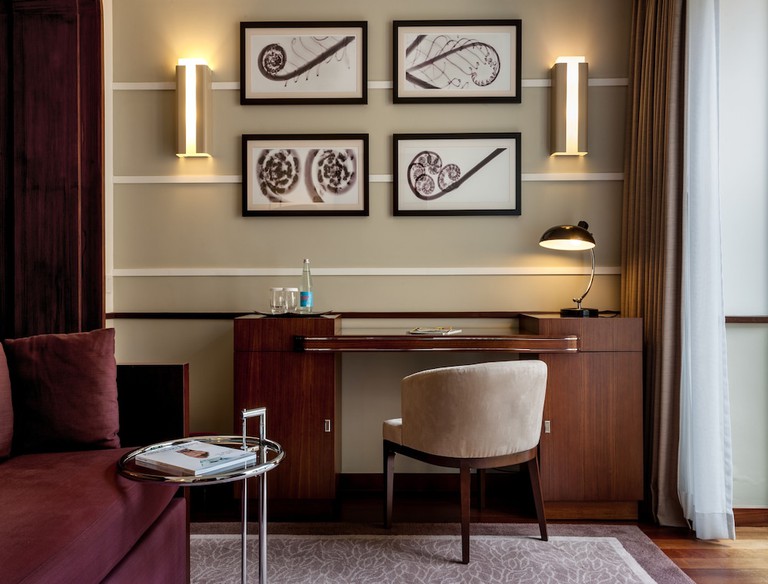 Courtesy of Terra Nostra Garden Hotel, São Miguel / Expedia
View Rooms
This two-wing hotel sits on the edge of Terra Nostra Park. Pooling out for 31 acres (12.5ha), the park is a patchwork of walkways, grottoes, crane-high palms and flowers – especially camellias. The room cost includes access to the park and its volcanic pool. Book a superior garden room and you can walk straight from your terrace into the greenery. Be sure to book into the hotel’s restaurant – the cozido das Furnas stew is slow-cooked underground.
More info 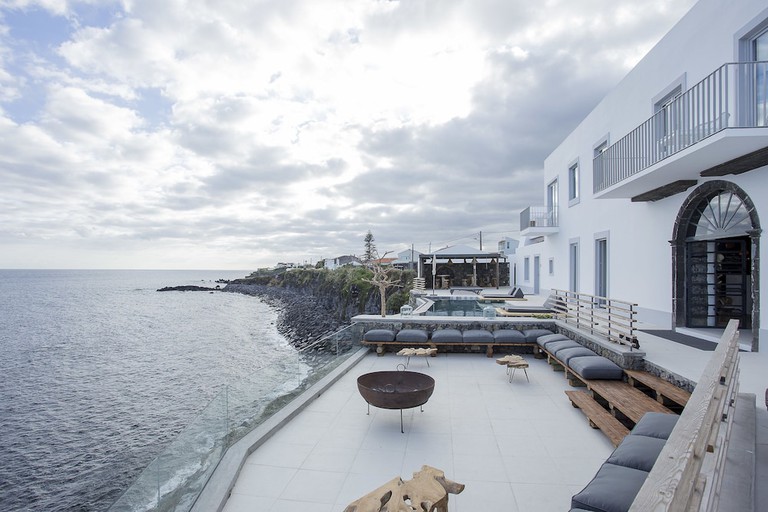 Courtesy of White Exclusive Suites and Villas, São Miguel / Expedia
View Rooms
The sea provides the soundtrack to stays here. The nine suites and two villas here are set on top of a low cliff on the southern coast of São Miguel; the water laps the rocks a few metres below the rooms. You’ll get the best view of the Atlantic from the ocean suites and the Hut – a glass-walled gazebo where you can have spa treatments like the Portuguese salt exfoliation ritual – in view of the waves.
More info 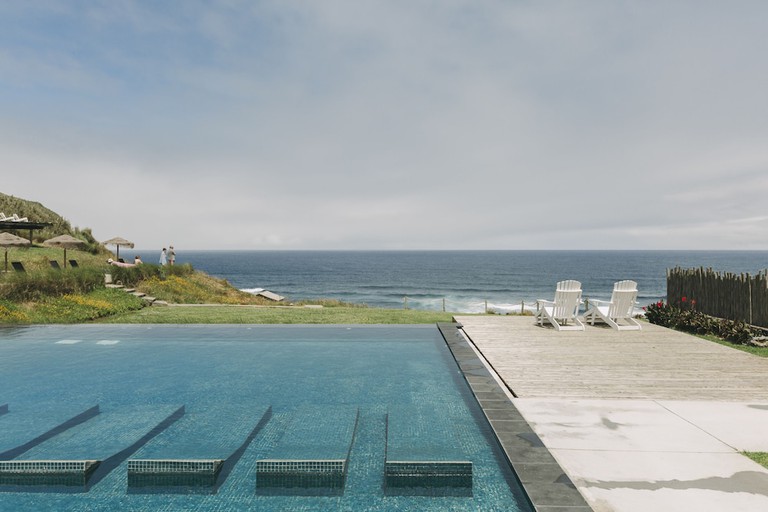 Courtesy of Santa Barbara Eco-Beach Resort, São Miguel / Expedia
View Rooms
There are 3.5 acres (1.5ha) of greenery surrounding this eco resort on São Miguel’s north coast. The hotel has been built with natural materials like Azorean cryptomeria wood and Portuguese cork, so it blends into the landscape. There are three room types here. The garden villas come with hammocks and access to a private garden, while the blue and green villas let you step into a pool directly from the patio. The retreat villas, meanwhile, feature private jacuzzis.
More info 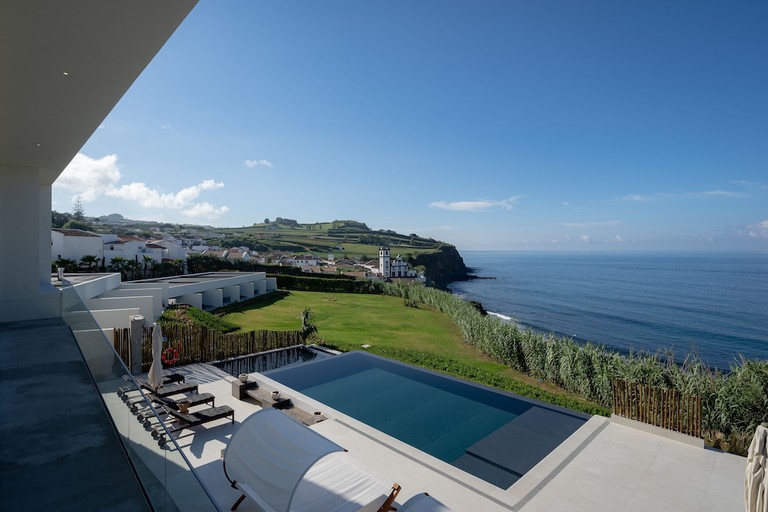 Courtesy of Sul Villas and Spa, São Miguel / Expedia
View Rooms
This collection of villa-style suites crowns the headland above Santa Cruz Bay, a 10-minute walk from Lagoa, on the south coast of São Miguel. Dip into the hotel’s statement pool and you can take in views of the ocean and the town centre, with its striking white-and-wood church spire, at the same time. If you feel like spoiling yourself, book into a prime suite and you can enjoy the same vista from the comfort of a private jacuzzi.
More info

Courtesy of Hotel Casa Hintze Ribeiro, São Miguel / Expedia
View Rooms
Located in the historic centre of Ponta Delgada, this hotel is named after the Portuguese prime minister Hintze Ribeiro, who was born nearby. The hotel also celebrates the life of Ponta Delgada-born poet Natália Correia; the words of one of her poems are printed on the rugs of some of the rooms. There are bars, restaurants and shops surrounding the hotel. However, it offers relaxation spaces, too, including two outdoor pools and an indoor jacuzzi.
More info 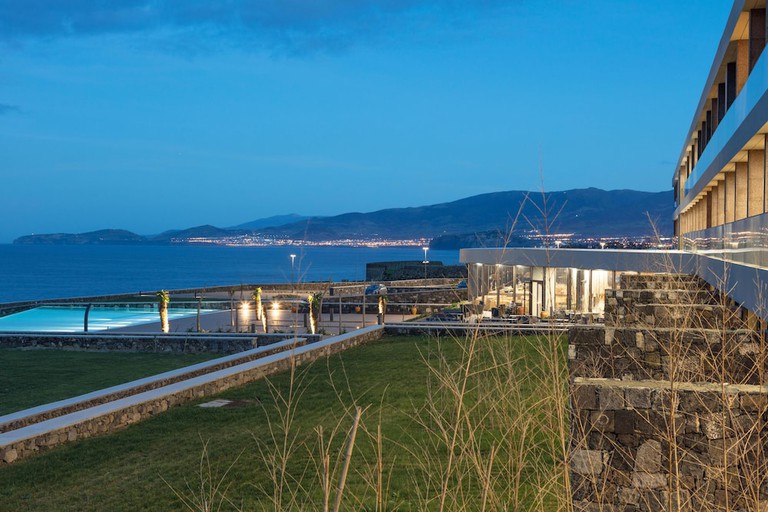 Courtesy of Pedras do Mar Resort and Spa, São Miguel / Expedia
View Rooms
Belted by green fields, the Pedras do Mar Resort is in a cloister-quiet part of São Miguel’s north coast. The rooms at this ocean-view hotel are decorated in soothing wood and white colour schemes, and there’s a calm spa on site. Things get a little livelier around the sea-view pool, where cocktails are served waterside, and in the bar, where piano players often perform. If you want a little more action, you can drive to Ponta Delgada in 20 minutes.
More info 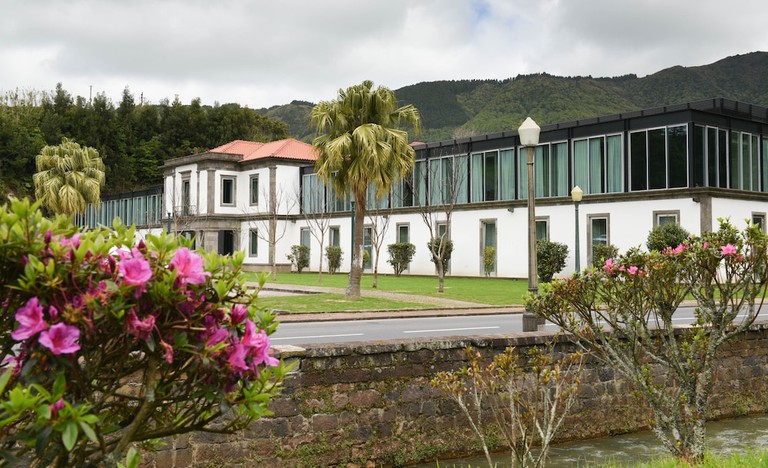 Courtesy of Furnas Boutique Hotel Thermal and Spa, São Miguel / Expedia
View Rooms
These smart rooms with their Marshall speakers, SMEG fridges and finishing touches like Kima – a Ponta Delgada-made passionfruit juice – in the mini bar, are just a few minutes’ walk from Furnas’s natural springs, gardens and waterfall. Take a break from exploring to visit the spa. There’s a twin set of thermal pools here and a Green Island-themed treatment menu. Try the Azores in Colour, which includes an exfoliation with locally made Gorreana tea followed by a camellia oil massage.
More info 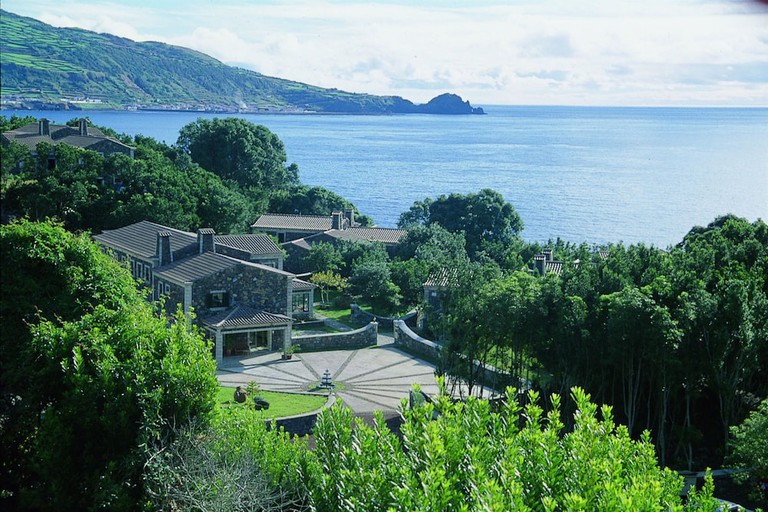 Courtesy of Aldeia da Fonte Hotel-Apartamentos, Pico / Expedia
View Rooms
This hotel, with its volcanic stone buildings, is set on the cliffside on Pico’s south coast. Multiple spaces overlook the ocean here. There’s the pool, where you can often catch sight of dolphins while you swim. There’s the Sea Lounge, which is an area of decking topped with seating right on the edge of the cliff. Then there’s the whale-watching tower, with its binoculars. You can also see the Atlantic through the trees from some of the rooms.
More info 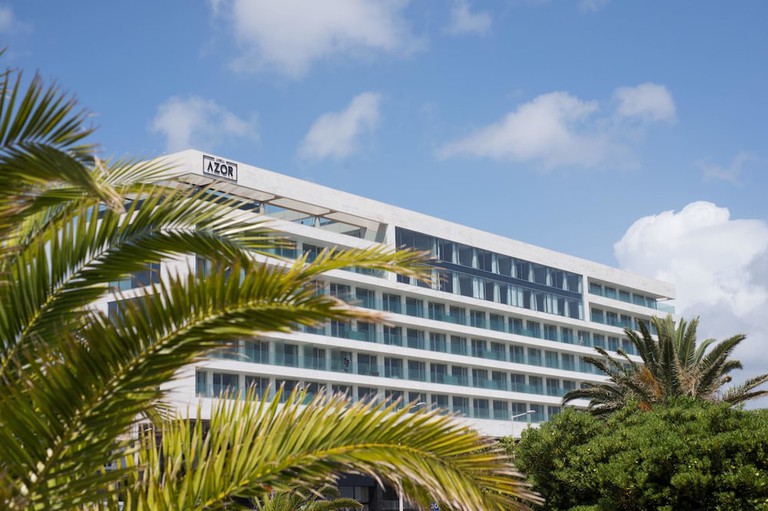 Courtesy of Azor Hotel, São Miguel / Expedia
View Rooms
Every room at Azor looks out over the Ponta Delgada marina. There’s a 24-hour concept here – the pool and gym are open around the clock, and you can enjoy a continental breakfast at any time of day. Food plays a big part in a stay here; there’s a cheese corner in the lobby where you can sample local cheeses like ilha. The hotel’s restaurant, meanwhile, pays tribute to local produce like limpets, Azorean steak and Pico butter.
More info

If you’re looking for somewhere different to stay, why not opt for an all-inclusive resort in the Azores instead? For help planning your itinerary, we’ve compiled a list of all the reasons why you must visit the Azores, from the top things to see and do as well as the most beautiful places.