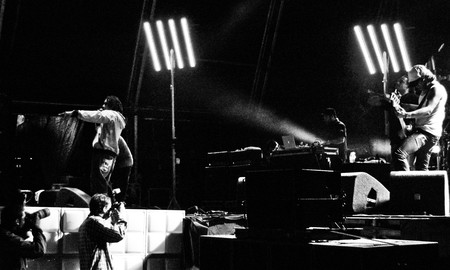 Ever heard of Hip-Hop Tuga? This is the name of Portugal’s own unique kind of rap and hip-hop music, which emerged from the country in the 1980s. Read on to discover everything you need to know about the sub-genre, from its humble beginnings to its place in Portuguese music today. In this first part, we look at the history of Hip-Hop Tuga throughout the 1990s.

Every place in the world has a music scene with genres they created and genres they adopted. It is undeniable nowadays that most countries have their own hip-hop scene, in their own language. The genre is malleable enough to allow people to make it as personal as they want with what they say, and the rhythm and samples that they use. This is what enables hip-hop music to have such a deep personal connection to the place from where it emerged. Rap music done by Portuguese in Portuguese is called Hip-Hop Tuga. It became a popular genre and is now a staple among the Portuguese music scene.

The genre has its origins in the middle to the late 1980s, but it is only in the early/mid-1990s that it starts to become relevant (and published). In 1994, the album Rapública was released. This was the first ever compilation of Portuguese rap from Portugal. It featured some of the most prominent rappers from the Lisbon metropolitan area. Its single – the Black Company song ‘Nadar’ – was a major hit that was even referenced by the president of the republic at the time during a speech. It has a sing-along, catchy chorus that makes it part of the Portuguese zeitgeist, for it is still present in many people’s minds. But Rapública is an eclectic compilation that features rap with different styles of beats and different subject matters – from feel-good to poetic-personal to highly political songs. Plus, it is even in different languages such as Portuguese, Creole and even English (something that is not common from that compilation onward since it became a thing of pride in Hip-Hop Tuga to rap in Portuguese – even if it means a lower audience turnout than rapping in English, where they could reach more audiences overseas). This will be a blueprint for recurring themes in Portuguese hip hop, where you find in most albums political songs, poetic-personal songs to feel-good songs (to a certain degree, of course, as every rapper has his preferences). You will also find some Creole rappers either with their projects or featured in some songs of prominent rappers.

The artist from that initial compilation that achieved the greatest success is Boss AC, who achieved commercial success all throughout his long career (from 1994 till present date). He has five commercial releases in his name, and in all of them, he managed to have at least one single that reached the charts. His top hit is ‘Hip Hop (Sou Eu E És Tu)’ – a sort of love letter to the genre he sings, a song with a catchy beat released on his most successful album to date, 2005’s Ritmo Amor e Palavras.

In 1995, Boss AC collaborated with an experimental group called Da Weasel on their first album (in the title track), and the group went on to achieve great commercial success. The group was a live instrumentation band with (hard) rock and reggae influences that rapped their verses and sang the chorus. Da Weasel released seven albums of original songs plus three live albums. Their most well-known song is ‘Re-tratamento,‘from their most successful album Re-Definições. This is a guaranteed sing-along song, not just the chorus.

Portuguese rap didn’t only emerge from the Lisbon area. In 1996, Dealema, from Porto’s metropolitan area, released their first EP, Expresso do Submundo. This is a much more underground band that is still well known (especially in the northern regions) and respected among fans of the genre. This band is made up of talented MC’s each with their specific voices, making them an incredible complete group. They are lyrically complex, eloquent rappers and have forged their unique style. Arguably, their most well-known anthems are ‘A Cena Toda’ and ‘Escola dos 90.’

Also from Porto, Mind Da Gap are another great band that stood out and became well respected, both underground and in the mainstream. One of the first songs to earn them recognition was ‘Nortesul’ – a collaboration with members from Da Weasel. Their 2002 album, Suspeitos do Costume, was the first ever silver album in Portugal. The hit single, ‘Bazamos ou Ficamos,’ is what most likely contributed to the album’s success although, arguably, their most famous song to date is ‘Todos Gordos,‘ from their 2000 album A Verdade – an anthem of a loyal friendship.

Other notable artists from that era include Xeg; NBC; General D; Microlandia; Chullage; Nigga Poison.
This article is part of a series. Find the second part here.