Get Your Winter Sun and Wellbeing Fix at Vale do Lobo, Portugal 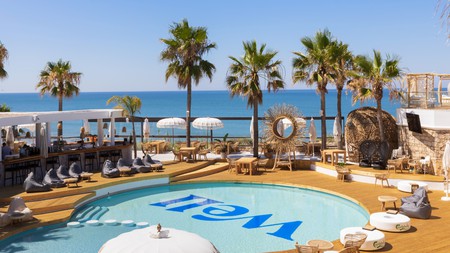 Vale do Lobo has a host of facilities, including Well, a beach bar with pools | Courtesy of Vale do Lobo

Think Vale do Lobo, and it’s probably the lush green of the fairway at one of the two stunning 18-hole golf courses that criss-cross the resort that comes to mind. But there’s a lot more to this oceanfront community, which is one corner of the famed Golden Triangle of luxury holiday spots in the Algarve, Portugal. And you won’t have to look too hard to find it.

Vale do Lobo boosts your wellbeing in many ways, not least via the radiant sunshine, cloudless skies and 25C (77F) temperatures typical of October. But the food at the 500ha (1,236-acre) resort is something else, with an incredible range to choose from. 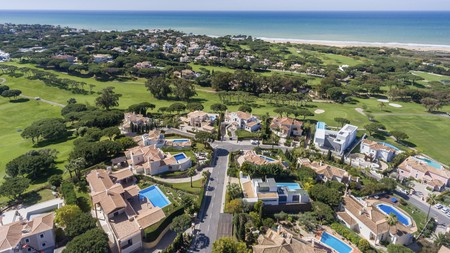 Vale do Lobo is a sprawling resort in the Algarve, Portugal | Courtesy of Vale do Lobo

Spikes is in the clubhouse at Vale do Lobo, but that’s where the similarities with most 19th-hole venues end. Of course, you can get a great club sandwich here, but the Mediterranean and European restaurant, opened by chef Maurice Belhaj and his family in 2003, has a whole lot more to offer. During the day, the chef and his wife Fátima, along with sons Alex and Kevin, reward those golfers adventurous enough to look beyond the usual post-round fare with such delights as spaghetti with prawns, vegetables and tomato confit, and a gloriously fresh Moroccan salad with chicken, couscous and aromatic herbs. 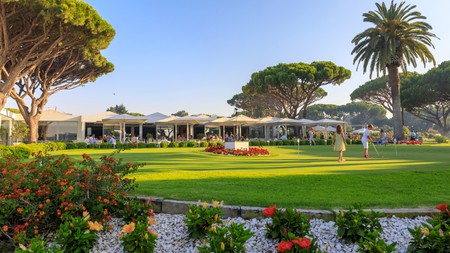 Within a beautiful setting, Spikes serves Mediterranean and European dishes | Courtesy of Vale do Lobo

Come in the evening, and with the adjacent putting green now empty, you can enjoy the majesty of the indigenous pine trees ringing the terrace, each lit from below. The prawn and monkfish stew with vegetables is light and simple yet rich in flavour, and the tenderloin steak with shallot and tomato confit does not disappoint. But it’s the chocolate cake, a 20-year-old recipe by chef Belhaj himself, that you really should not miss. It’s served chilled with vanilla ice cream and whipped cream and reaches some divine point halfway between cake and mousse that you won’t soon forget. The brunch at Spikes is spectacular, too.

U&Co Restaurant has a great spot on a bluff overlooking the beach and a canopied terrace that affords fine sunset views. The food lives up to that vista as well, from crispy panko prawns with green mango salad, lime and sriracha mayonnaise to seafood pasta sotto swimming in a delicious broth and crusted cod in a bouillabaisse broth accompanied by clams, cherry tomatoes and gnocchi. For dessert, the indulgent key lime pie is a winner.

Right down by the sea is Sandbanks Beach Restaurant, which brings to mind the glitzy neighbourhood of the same name on the beachfront in Dorset, where rumoured Vale do Lobo villa-owner Harry Redknapp famously once lived. If the seafood is lovely elsewhere, Sandbanks takes it to another level. Try the salt-baked whole sea bass or golden bream – which you have to order in advance from the chef; melt-in-the-mouth seared scallops on parsnip puree; or cataplana à Algarve, a Portuguese seafood stew for two that comes steamed in a large dish and is ladled onto the plate by your waiter. Try the gratin potato side, too.

Between meals, there are a lot of opportunities to burn off calories outdoors that don’t involve golf, including HIIT classes, boot camp-style training, deep-core and wellbeing sessions and yoga. There are also guided walks around the resort, taking in its undulating roads and immaculately maintained tree-lined avenues – well worth it for a peek at some of the modernist mansions and traditional villas. 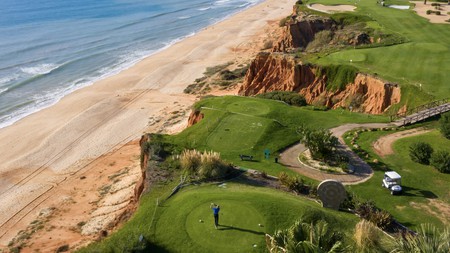 Indoors, there’s pilates at the pilates studio and cycling at the fitness centre by reception. Downstairs, there’s a wellness centre that offers massages so good that they’ll iron out the tension in muscles you never knew you had.

Then there’s the renowned tennis academy, which has nine hard courts, four artificial clay courts and three padel courts – the majority of which are floodlit – not to mention a gym and an outdoor swimming pool, as well as a bar and a restaurant. Every morning, the sound of tennis balls being thwacked fills the air of the little valley where the academy sits. 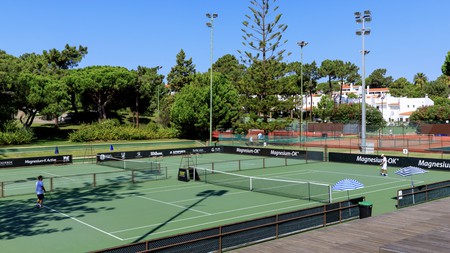 It also has 13 tennis courts | Courtesy of Vale do Lobo

Down by the beach, before the red-clay cliffs, where the vivid pink sunsets are spectacular, is a plaza with a selection of restaurants and bars, including Sandbanks. There’s also crazy golf and the chance to test your football skills against a robot keeper. 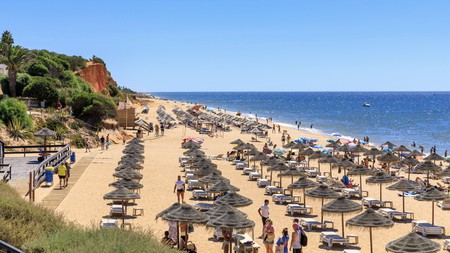 Vale do Lobo takes sustainability seriously, too, with regular beach clean-ups. The best way to get around is also the most ecofriendly, with several smart bike ports dotted around the resort, where one swipe of a card allows you to pick up one of the electric cycles. Just a single push of the peddle on an incline will send you whizzing up the hill, which is helpful at Vale do Lobo, where there are plenty of steep ones. They even have electric bell buttons you can push to let cars know you’re nearby. 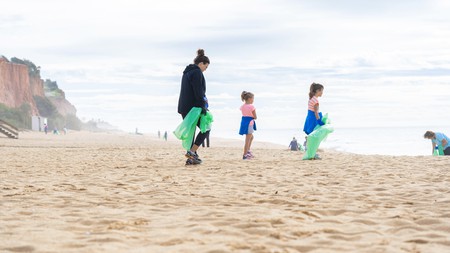 Loyalty cards get you a free bus shuttle service you can call up to any one of 19 pick-up points around the resort, as well as discounts on rounds of golf, the wellness centre and restaurants.

Book a stay at Vale do Lobo right now with Culture Trip.