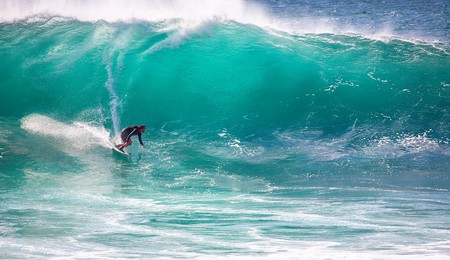 From the beginner-friendly waves in Peniche to the monsters at Nazaré, here is Culture Trip’s rundown of the best surfing destinations in Portugal.

Feeling inspired? You can learn to surf in Comporta – an artsy town with superb beaches on the Tróia Peninsula – as part of Culture Trip’s exclusive nine-day Portugal adventure.

Most people don’t know it, but Portugal holds the Guinness World Record for the largest wave ever surfed. In November 2017, Brazilian surfer Rodrigo Koxa rode an 80ft (24m) wave off the coast of Nazaré, a small fishing village 120km (74mi) north of Lisbon. Nazaré is just one of the many prime surf spots along the Portuguese coastline, however, it comes with plenty more accessible spots for beginners and intermediates. Here’s our guide to some of the finest places to go surfing in Portugal.

Northern Portugal may be less popular when compared to the beaches in the central and southern parts of the country, but Porto and its surrounding area are home to a few wave-riding spots. The sea in this region is significantly colder, but that doesn’t stop the free-spirited surfers who rush to the water on a regular basis.

Just south of the Lima River from the nearby city of Viana do Castelo, Praia do Cabedelo is a 600yd (1km) long, arc-shaped beach surrounded by grassy dunes and a pine forest. The consistent onshore wind here is more suited to windsurfers and kitesurfers. Lighter wind reveals a steep, hollowing break that works at all stages of the tide – just watch out for the rip current. 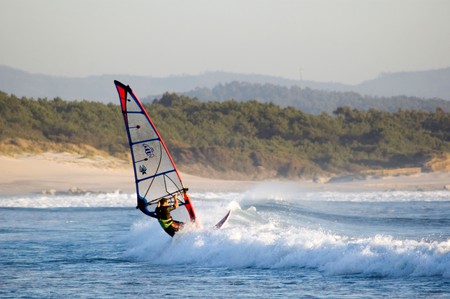 There are definitely more naturally alluring beaches in Portugal, but the proximity of Matosinhos to Porto – just a 15-minute metro journey from the city centre – is a major part of the appeal. The surf at this beach break is fairly mellow, increasing in size as you move further south down the beach. Plenty of surf schools dot the shoreline, aimed at beginners. Expect crowds when there’s a larger swell and clean offshore winds roll around.

Also reachable by a short train ride from Porto, Espinho is at the centre of a 17km (10mi) expanse of beaches stretching south from the estuary of the Douro River, featuring numerous prime surf spots. Neighbouring beaches Praia da Baía and Praia Azul – both close to the centre of Espinho – are especially popular with surfers. The waves here are generally more challenging to ride than those in Viana do Castelo and Matosinhos, making it a great spot for intermediate and advanced surfers. 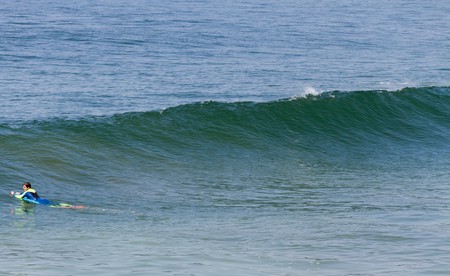 Head to the central coast for waves that have garnered worldwide attention. Most water-loving athletes make a beeline here, as the waves are among the fiercest not just in Portugal, but in all of Europe. Although, you’ll still find plenty of beginner-friendly breaks, too. Even if surfing isn’t your thing, it’s worth grabbing a drink at a nearby cafe and watching the pros do what they do best.

Home to the longest right-hand break in Europe, Figueira da Foz – a small city at the mouth of the Mondego River around 40km (25mi) from Coimbra – offers some of the most exhilarating wave-riding opportunities in Portugal. There are three main breaks here: Tamagueira, Teimoso and Mina. When big swell rolls in from the northwest, these waves join together to create a seriously long point break. There’s a reason why it is called the J-Bay of Portugal, echoing the conditions of the world-class South African spot. 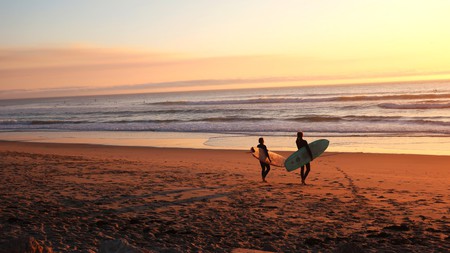 Formerly a quiet fishing village, Nazaré has been propelled into the international spotlight in recent years – earning a reputation for its towering waves. Those at Praia do Norte are propelled to monstrous heights, thanks to the Nazaré Canyon – the largest underwater canyon in Europe – which converges the ocean swell from beneath.

Both the male and female Guinness World Records for the largest waves ever surfed have been recorded here. Rodrigo Koxa surfed an 80ft (24m) wave in November 2017 and Maya Gabeira surfed a 73.5ft (22.4m) wave in February 2020. Simultaneously terrifying and awe-inspiring, Nazaré isn’t the place for casual or even intermediate surfers – but you can take a funicular up to Sitio da Nazaré for views of the thundering waves crashing against the craggy coastline below. 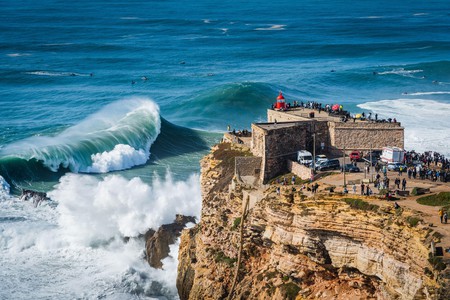 On a peninsula jutting out into the Atlantic, Peniche – the westernmost city in mainland Europe – is often considered the surfing capital of Portugal, with more than 30 surf spots of varying extremity. In the north, you’ll find a number of rookie-friendly breaks such as Gigi, Prainha and Cantinho da Baia where mellow waves break onto soft, sandy beaches. Expert surfers keen for a challenge must venture to Papoa, where the biggest waves rival Nazaré – or the fast barreling waves of the supertubes. 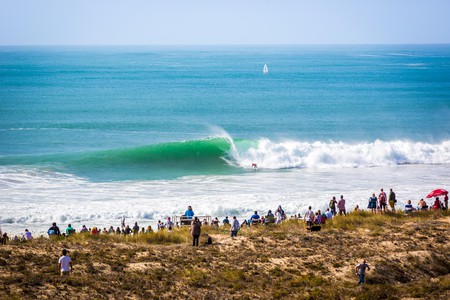 Ericeira was declared a World Surfing Reserve in 2011 by the Save the Waves Coalition – a non-profit organisation that seeks to protect the world’s outstanding surf spots and their ecosystems. Joining ranks with Baja California in Mexico, the Gold Coast in Australia, and Malibu in California, it remains the only place in Europe with this prestigious status due to its rich biodiversity – home to more than 1,000 marine species – and a variety of consistently excellent waves. From the gentler spots of Foz do Lizandro and São Julião in the south to the heftier swells of São Lourenço and Coxos in the north, Ericeira has plenty of fantastic surf spots for all skill levels – less than an hour’s drive from Lisbon. 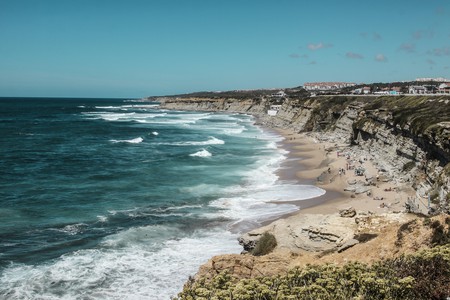 Speaking of Lisbon, one of the top spots for riding the waves near the capital is Costa da Caparica on the Setúbal peninsula, just a 20-minute drive from the city. The beach stretches for 30km (18mi) down the coast. Expect crowds closest to the town where more defined peaks break off the jetty. Featuring left and right breaks of varying intensity, Costa da Caparica is an ideal spot for beginners and intermediate-level surfers. 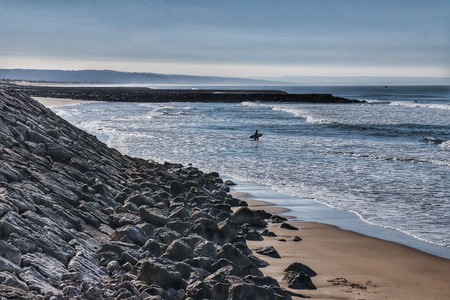 Although not quite as renowned as the surf spots along the central and northern coasts, the Algarve still offers several top beach breaks against the backdrop of dramatic cliffs and golden beaches. You’ll also find considerably warmer water here than elsewhere in the country.

Straddling a rocky headland on the southwestern tip of the Algarve, Sagres has the major advantage of two distinct coastlines – if the surfing conditions aren’t suitable in one area, you can easily try the other. Tonel and Beliche are two of the most enticing surf spots on the west coast for powerful, hollow waves – bear in mind that conditions are likely to be drastically better in winter than in summer.

On the south coast, Mareta, Martinhal and Praia do Zavial are calmer, more sheltered alternatives for learners – although the latter can get fairly choppy in winter, depending on the strength of the swell. 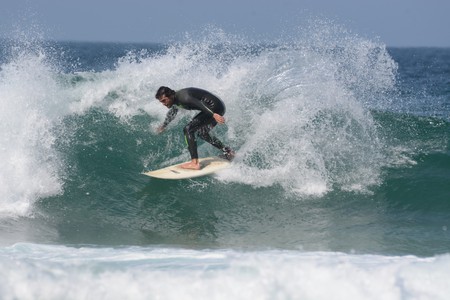 With two coastlines, Sagres has plenty of surf spots to sample | Photo by John Oswald on Unsplash

Head 50km (31mi) north of Sagres up the west coast and you’ll arrive at Arrifana, one of the most consistent surf spots in the Algarve – suitable for all abilities. Unlike other less predictable parts of the Algarve, you can surf here all year round and rarely ever come away disappointed. Towards Kangaroo Point at the north end of this crescent-shaped bay, the waves can get particularly zippy and break around jagged rocks – so steer well clear unless you really know what you’re doing. 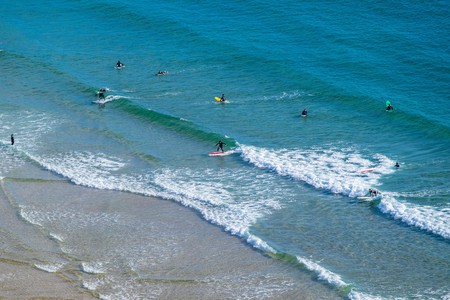 This is an updated version of an article originally written by Nina Santos.