The Best Things to See and Do in Sintra, Portugal 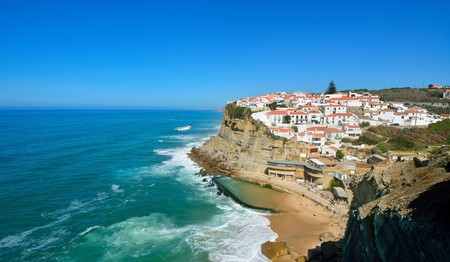 Sintra is one of Portugal’s most enchanting cities, filled with fairytale palaces, manicured gardens, mysterious paths and an idyllic coast. Planning a holiday or a day trip to Sintra? This is our list of the best things to see and do.

This charming resort town, in the foothills of the Serra de Sintra, has long been a favourite destination of Portuguese royalty, and it’s known for its many whimsical palaces and villas – including the Palácio Nacional de Sintra and the magical garden of Quinta da Regaleira. You’ll also find hidden coves and towering mountains in Sintra-Cascais Natural Park as well as the westernmost point of the country, Cabo da Roca – all just a half-hour drive from Lisbon.

Lose yourself in the magical gardens of Quinta da Regaleira 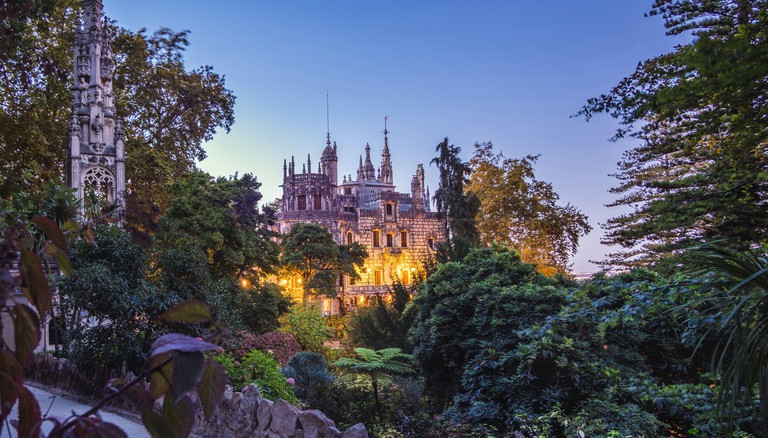 © R.M. Nunes / Alamy Stock Photo
A long-time royal retreat, Sintra is full of beautiful 19th-century villas and palaces – but none are as magical as Quinta da Regaleira. The romantic palace was designed by Italian architect Luigi Manini in the late 19th century, with a garden resplendent with lakes, fountains, grottoes and follies – and both the house and garden are full of mystic symbology. The extravagant quinta (large house), which is now a Unesco site, is also known as the Palace of Monteiro the Millionaire in a nod to its most-famous former owner, businessman António Augusto Carvalho Monteiro.

The two enormous conical chimneys of the Palácio Nacional de Sintra (Palace of Sintra) have become one of the most well-known emblems of the region – and the palace itself is one of the area’s most popular attractions. The earliest surviving part of the palace was built in the early 14th century, and the palace was almost continuously inhabited from the 15th century until the late 19th century. As the best-preserved medieval royal residence in the country, it has been designated a Unesco site. Skip the queues and buy tickets in advance online, then spend a few hours wandering through the ornate interiors.

Stand at the westernmost point of Portugal at Cabo da Roca 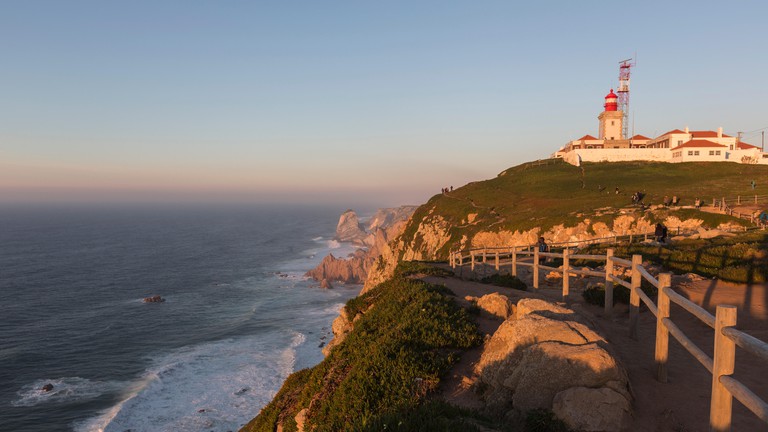 It feels like you’re standing at the edge of the world at this remote and rugged headland in Sintra – so it’s no surprise that Cabo da Roca was believed to be the edge of the world up until the 14th century. The cape marks the westernmost point of Portugal, and features a notable lighthouse that dates back to 1842. Today, it’s a popular spot to watch the sunset over the Atlantic Ocean. Nearby, challenging clifftop hiking trails lead to secluded coves, such as Praia da Ursa.

If you have to choose one place to visit in Sintra, head to the Parque Natural de Sintra-Cascais, one of Portugal’s 13 national parks. Alongside spectacular natural beauty that combines dramatic mountains and coastal cliffs with sandy beaches and forests, you’ll find some of the region’s most interesting historic attractions, including the fairytale-like pink and ochre Pena Palace – regarded as one of the country’s Seven Wonders. There’s also plenty of hiking trails and even fossilised dinosaur tracks. 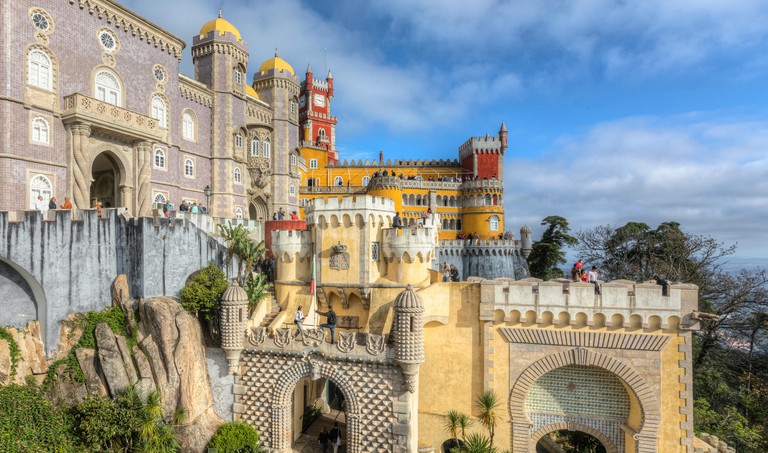 An ornate stone cross, known as the Cruz Alta (High Cross), in the forested Parque da Pena marks the highest point in the Serra de Sintra mountain range. A cross was originally placed here in the early 16th century, but was destroyed by a storm. The replica that stands here today was erected in 2008 and is carved from a single block of limestone. Hike up to the 528m (1,732ft) summit for views over Lisbon, Cascais and the Atlantic Ocean.

Go back in time at Castelo dos Mouros

Building, Park, Ruins
Facebook
Email
Twitter
Pinterest
Copy link
Share
This Moorish castle sits high on a hilltop overlooking Sintra and dates back to the eighth and ninth centuries, making it the oldest monument in the area. While some ruins of the original structure remain – including a mosque and several houses – the main walls and towers that stand today were built and restored in the 19th century under the direction of King Ferdinand II. From the walls of the castle, you can see all the way out to Arrabida in the south, Cabo da Roca in the west and Peniche in the north. 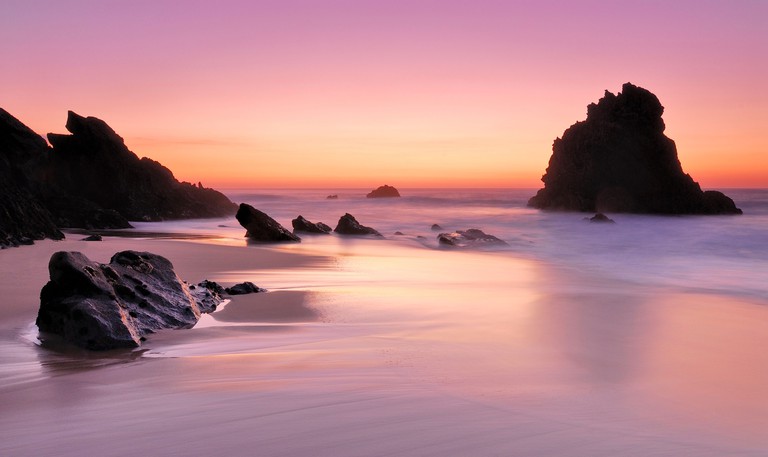 Nestled between towering cliffs in the Parque Natural de Sintra-Cascais, this pristine golden cove is known as one of the best beaches in the Sintra region for good reason. Alongside the dramatic landscape – which features wind- and sea-carved rock formations – there’s a beachside restaurant, toilets, shower facilities and a lifeguard in the summer months. You can only reach Praia da Adraga by car and the small carpark can fill up quickly, so it’s best to arrive early in the morning.

Discover the history of aviation in Portugal at Museu do Ar

Located at the Sintra Air Base – with additional sites at Ovar and Alverca – the Museu do Ar (Air Museum) is a fascinating insight into more than 100 years of aviation in Portugal. The main museum features more than 40 historic planes and helicopters, simulators, propellers and engines in an expansive space – along with the Pioneers Room, which is devoted to Portugal’s most famous aviators. There are also exhibitions detailing the history of TAP Air Portugal, the state-owned airline, and ANA, the airport authority of Portugal – and which include the original model of Lisbon Airport.

Get the adrenalin pumping at Pedra Amarela 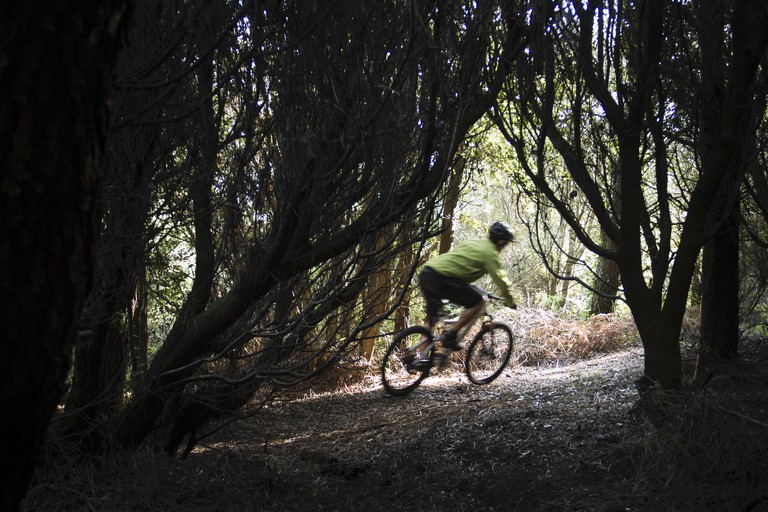 This 313m (1,027ft) summit in Sintra is home to several excellent hiking trails, including the easy Rota Circular do Pedra Amarela. It’s perhaps best known, however, for the nearby Pedra Amarela Base Camp – an adrenaline-fueling adventure camp on the southern slopes of the Serra de Sintra in the Parque Natural de Sintra-Cascais. Here, kids of all ages can go zip-lining, mountain biking, abseiling, rock climbing, follow a canopy trail or give archery a go.

Once you’ve ticked these attractions off your list, stay overnight in Sintra or hop back to Lisbon where you will find a number of boutique hotels, now bookable via Culture Trip. While you’re there, see the must-visit attractions in the city, or step away from the crowds and discover the capital’s art scene and the best places to try pastéis de nata.

This is a rewrite of an article originally by Nina Santos.