Spread across seven hills and straddling the Tagus River, Lisbon enthralls from the first with its attention-grabbing Moorish castle, whimsical Manueline architecture nodding to the Age of Discovery, and vintage trams rattling from one landmark, gallery and hilltop lookout to the next. Here’s Culture Trip’s take on the city’s 20 big-hitters.

With as little as a long weekend on your hands, you can easily do Lisbon’s trophy sights justice. High on any wish list should be hilltop São Jorge Castle, with its dress-circle views, fortress-like Sé Cathedral, gateway to the alley-woven Alfama quarter, and the Unesco World Heritage wonders of the Belém neighbourhood, where the spirit of Portugal’s maritime past lives on.

If you are staying longer, you’ll have time for day trips to the fantasy castles and palaces of Sintra, or to the futuristic Parque das Nações district, where you can dive into one of Europe’s most spectacular aquariums. 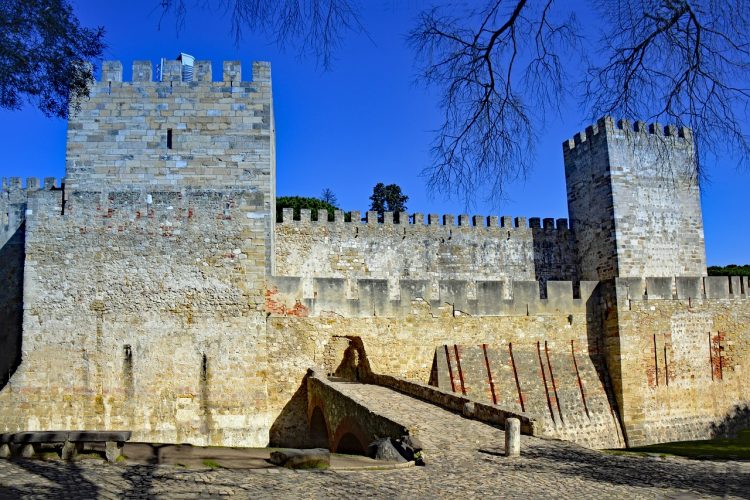 Crowning a hill above the historic centre, Lisbon’s fortress transports you back to the Middle Ages. It dates to the 11th century when the city was under Moorish rule, though a settlement has been here since the 7th century BC, as the archaeological site reveals. Head up here for far-reaching views from the pine-shaded ramparts (it’s a great place to play ‘spot the landmark’), a peek through the camera obscura and a shot of history at the museum. Book advance tickets to skip the queues. 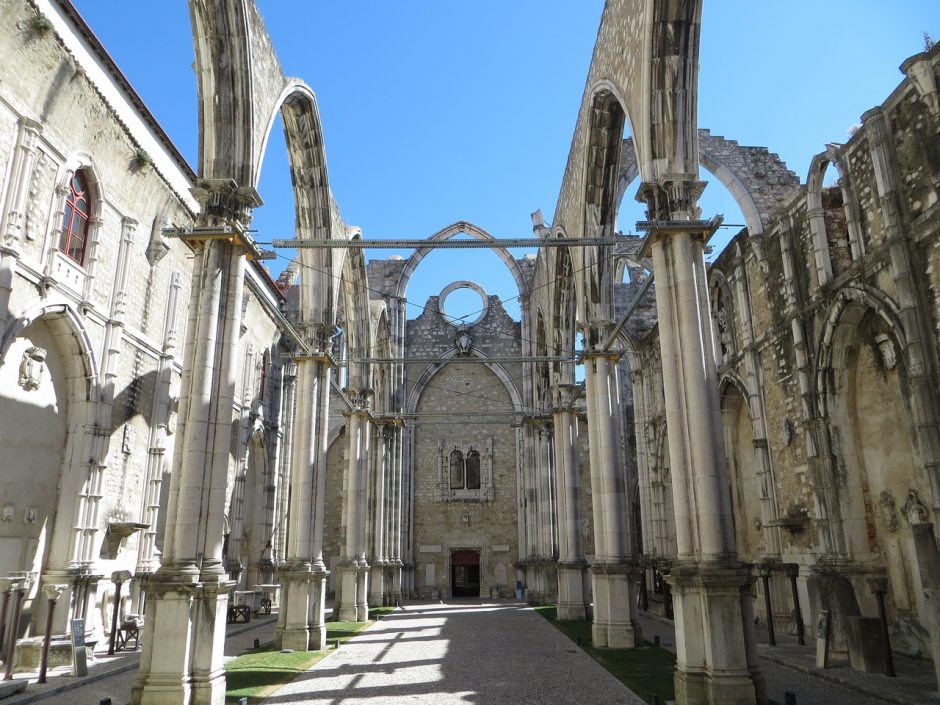 Carmo Convent was ravaged by the 1755 earthquake © Pixabay

With the arches and pillars of its nave open to the sky, the enigmatic ruins of this Gothic convent catch your eye as you wander Lisbon’s smart Chiado district. Founded as a convent for the Carmelite order in 1389, it was ravaged by the 1755 earthquake. Its archaeology museum showcases a chapel, beautifully tiled with baroque azulejos, alongside artefacts from prehistoric tools to Moorish friezes and pre-Columbian pottery. 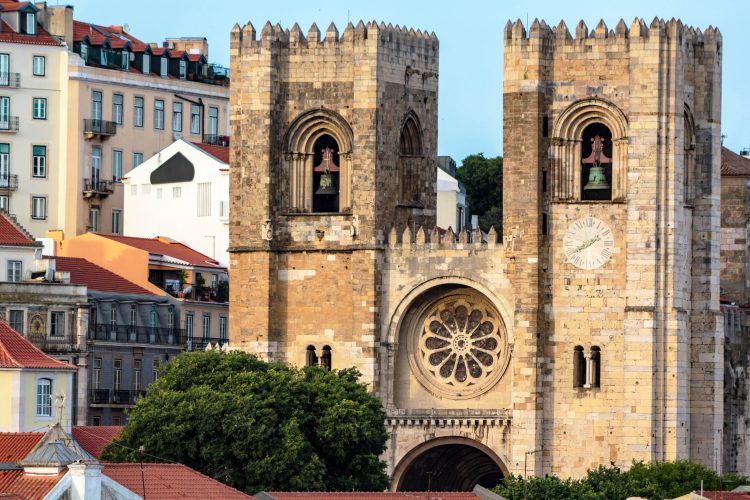 Vintage tram 28E grinds to a halt in front of Lisbon’s fortified cathedral – one of the city’s greatest icons. It was built high and mighty above the ruins of a mosque by Portugal’s first king, Afonso I, after the city was recaptured from the invading Moors. After taking in Gothic arches and medieval statuary in the vaulted interior, be sure to glimpse the Roman and Arabic archaeological remains in the cloisters. 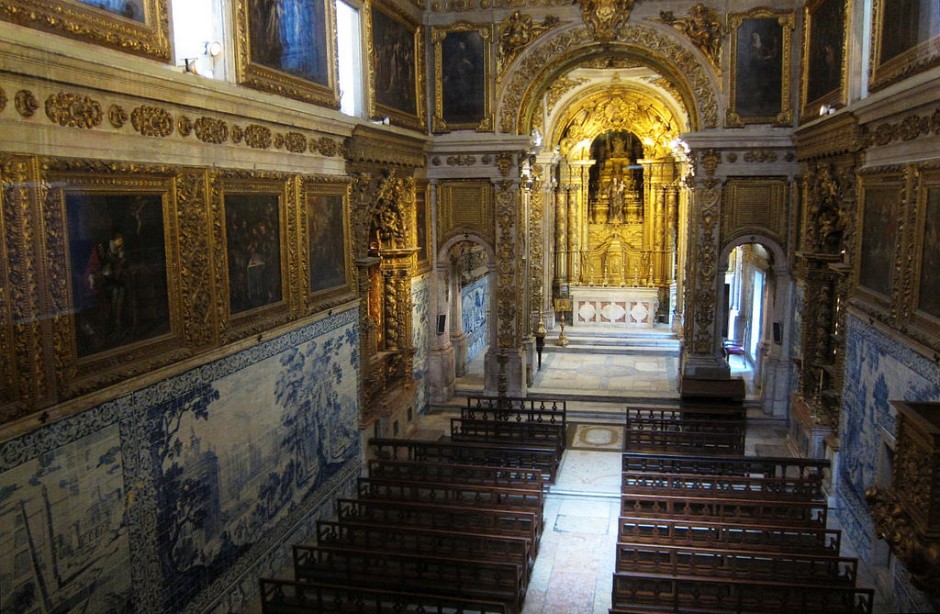 Lisbon is famous for the history and artistry of its azulejos (glazed, decorative tiles), and the only the very finest adorn this carefully restored 16th-century Manueline convent, located just east of town (take bus 759). The collection is a magnificent romp through 500 years of azulejo craftsmanship, from the Renaissance to the baroque and contemporary. Go for a coffee in the spectacularly tiled former refectory.

Technically not in Lisbon, the Cristo Rei Monument is a short ride across the Tagus River in Almada. It was built during the time of Salazar to resemble Rio de Janeiro’s Christ the Redeemer statue and holds religious significance in the country. 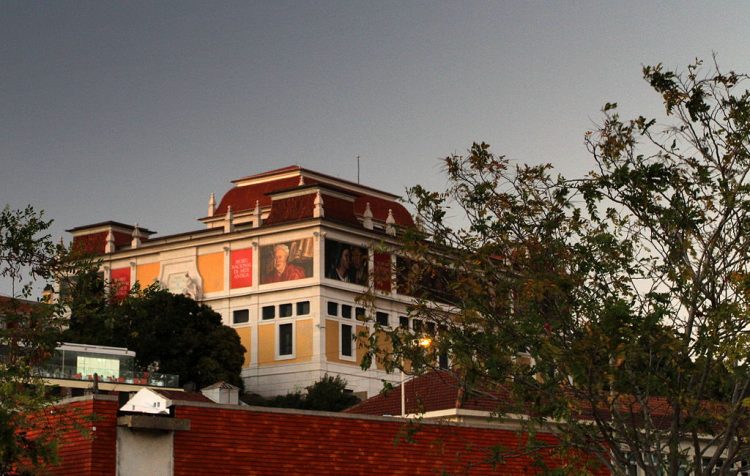 Lodged in a baroque palace, just a short hop west of town, this museum harbours one of Lisbon’s most exquisite collections of ancient art. Among the treasures are Egyptian and Roman sculpture, Old Master paintings, Portuguese goldwork dating to the Age of Discovery, plus precious textiles, lacquered furniture and ceramics from Asia. Renaissance genius Dürer’s painting of St Jerome (1521) and Nuno Gonçalves’ St Vincent Panels (1460) are among the unmissables. 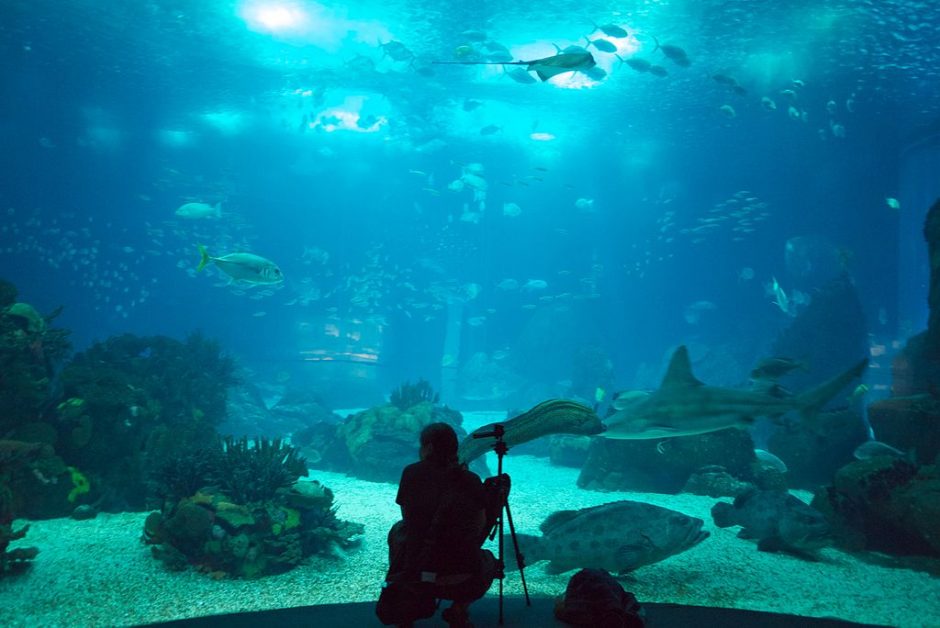 The centrepiece of Lisbon’s cutting-edge Parque das Nações district, this whopper of an aquarium is Europe’s biggest (and arguably best), recreating the Earth’s terrestrial and marine ecosystems. Puffins, penguins, jellyfish, sunfish, stingrays and – ramping up the cute factor – playful sea otters all splash around in enormous tanks. Should you so wish, you can even spend a night with the sharks. Skip to the front of queues by pre-booking tickets. 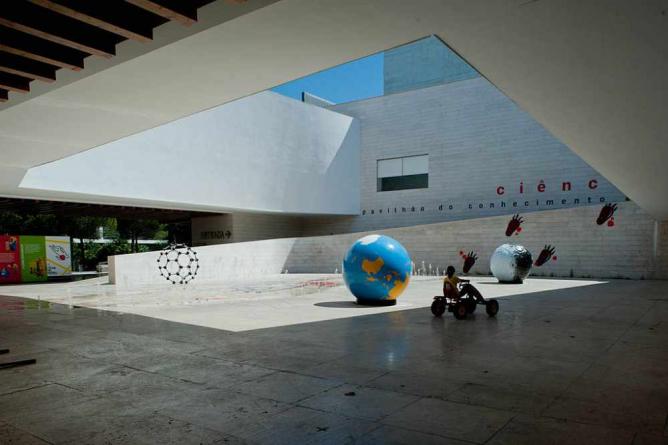 The undisputed star of the Belém Cultural Centre, this is Lisbon’s go-to gallery for modern and contemporary art. It showcases the collection of billionaire José Berardo, which reaches from abstract, surrealist and expressionist works to kinetic and pop art. Top billing goes to paintings by the likes of Warhol, Pollock, Man Ray, Dalí and Picasso, as well as sculptures by Antony Gormley and Henry Moore. To save euros, visit on Saturday when entry is free. And to dodge the queues, book tickets ahead. 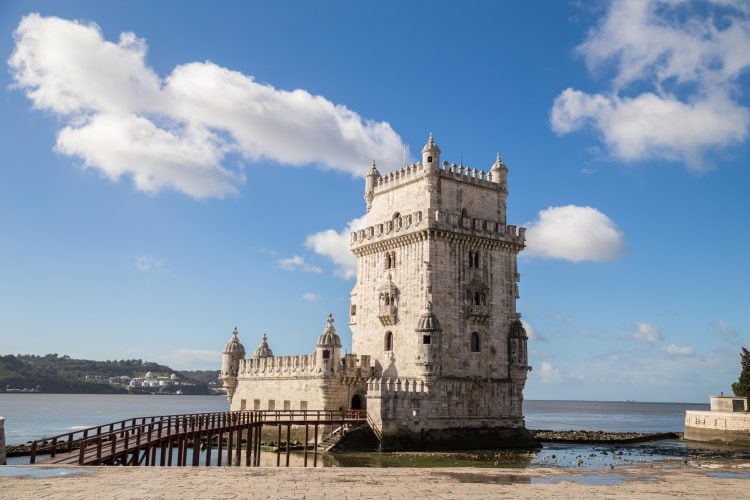 Belém Tower is another UNESCO World Heritage Site, due to its role in protecting Portugal’s coast during the Age of Discoveries and later. Portraying a combination of Gothic and Manueline architecture like the Jerónimos Monastery, the Belém Tower attracts visitors for its appearance as well as its role in history. Admission Fee: €6

Take a selfie in front of Lisbon’s most iconic suspension bridge and you can kid people into thinking you’ve been to San Francisco… That’s because the 2.27-km Ponte 25 de Abril, built by the American Bridge Company in 1966, is pretty much the carbon copy of the Golden Gate Bridge. For more of an insight into its construction and head-spinning views of the city and river, check out the Pillar 7 Bridge Experience.

When most of Lisbon was rocked by the 1755 earthquake, the old Moorish quarter of Alfama stayed standing. With twisting, cobbled alleys leading past higgledy-piggledy houses in pastel colours, this is hands-down one of Lisbon’s most charismatic neighbourhoods. Melancholic fado (Portuguese folk music) drifts from bars, and locals chatter in front of old-school grocery stores and taverns, with the castle peering down from above and the river stretching out below. 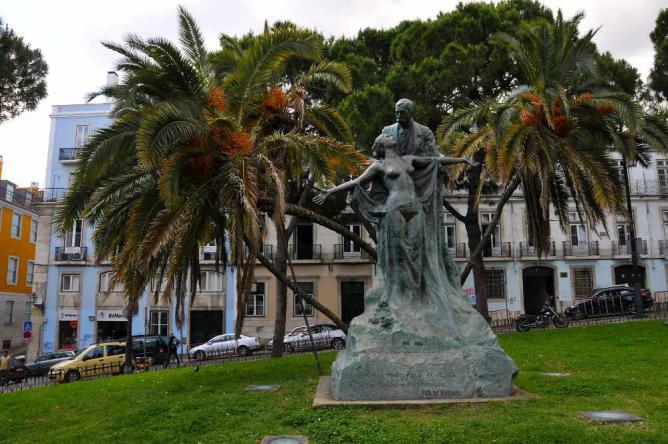 The stiff hike up to Lisbon’s miradouros (lookouts) is worth it for the soul-stirring views that await. Some even have kiosk cafes for kicking back and enjoy the view. Among the favourites are Miradouro da Graça and, nearby, the highest of the high Miradouro Senhora do Monte, gazing out over terracotta rooftops to São Jorge Castle and the Ponte 25 de Abril suspension bridge loping across the river. The tree-shaded Miradouro de Santa Catarina has a more boho vibe. For an overview of the city’s seven hills, hook onto an electric bike tour. 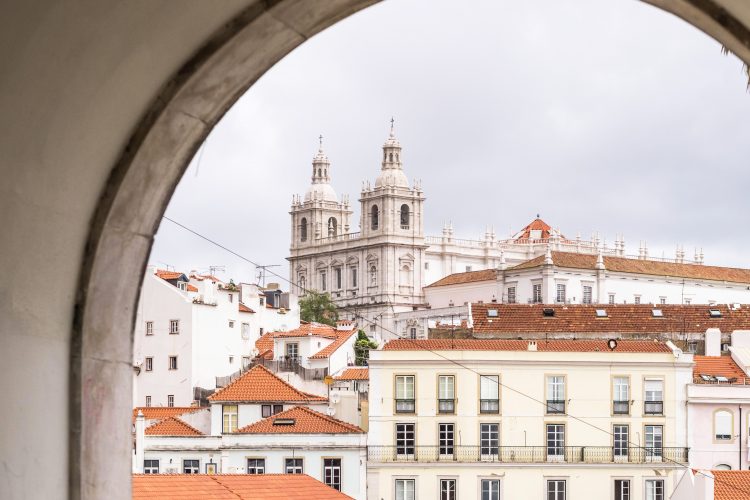 The crowning glory of Lisbon’s Graça neighbourhood, this monastery was founded in the 12th century, and then revamped in late-Renaissance Mannerist style in the 17th century. The atmospheric church and cloisters are exquisitely festooned with blue-and-white azulejos that recount the history of the monastery and the 1147 Siege of Lisbon. The vaulted refectory is now a mausoleum for the Kings of the House of Braganza.

One of the most defining characteristics of the Portuguese spirit is saudade (a sense of nostalgic longing), best expressed in fado, the nation’s soulful folk music. Huddled away in the Alfama, this museum zooms in on fado’s origins and the genre’s most famous singers and guitarists. Audioguides let you listen to recordings you explore. Skip the queue with a speedy access ticket. 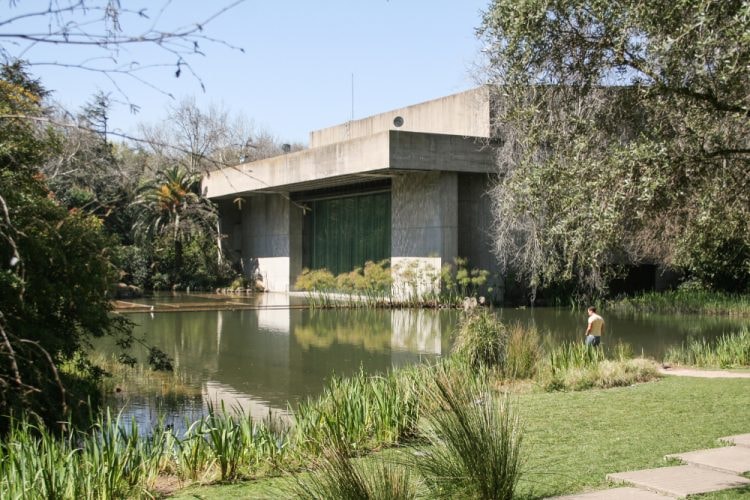 For ancient art overload, head over to this phenomenal museum, which presents the collection that Armenian mega-collector Calouste Gulbenkian bequeathed to the city. Egyptian funerary masks and stele, Greco-Roman medallions, Assyrian reliefs, Persian carpets, Qing Dynasty ceramics and Flemish tapestries are among the treasures, as are the exquisite Art Nouveau creations of French jeweller René Lalique. Beat the queues by pre-booking a ticket. 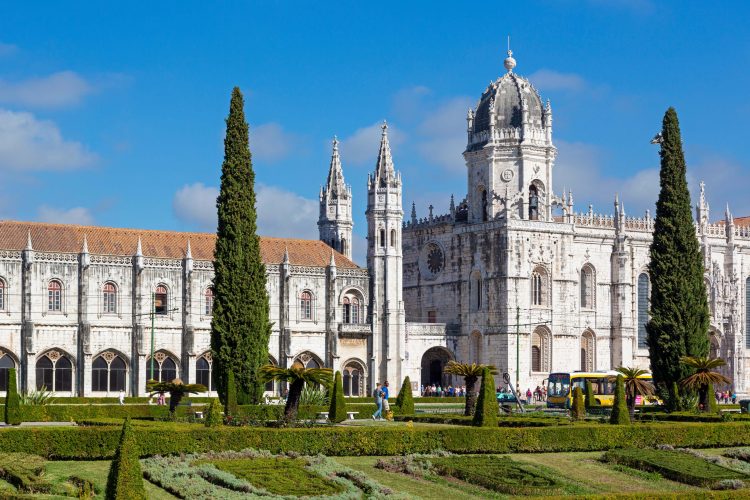 When King Manuel I wanted to shout about Portugal’s colonial triumphs in 1501, he gave the go-ahead to build this monastery in fanciful Manueline style. Now part of a Unesco World Heritage site, the monastery is a visual feast, with intricately wrought stonework, plaited arches and twisted turrets in the cloisters and the cross rib-vaulted church where navigator Vasco da Gama lies buried. To beat the crowds and get more insight into the monastery’s history, join the Belém Walking Tour. 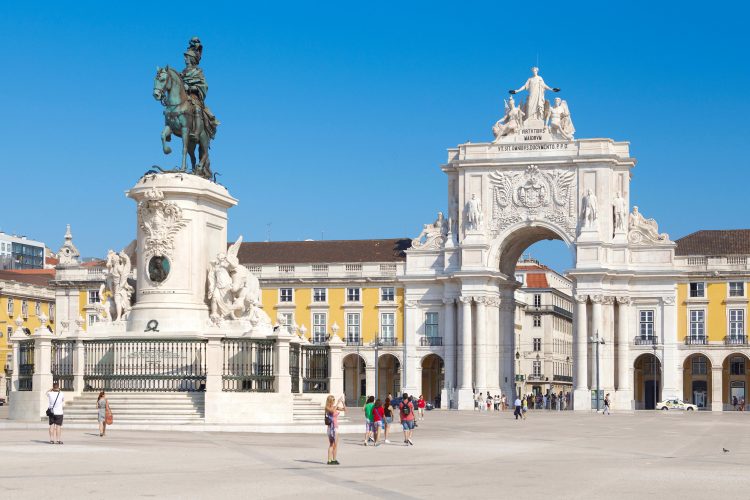 Down by the river, Lisbon’s showpiece square captivates from the first, with its grand 18th-century colonnades, triumphal arch, trams, and equestrian statue of King José I. For the inside scoop on the city’s history from Roman to modern times, check out the Lisbon Story Centre; you can skip the queue by pre-booking tickets. If wine tasting is more your thing, check out the ViniPortugal tasting room. 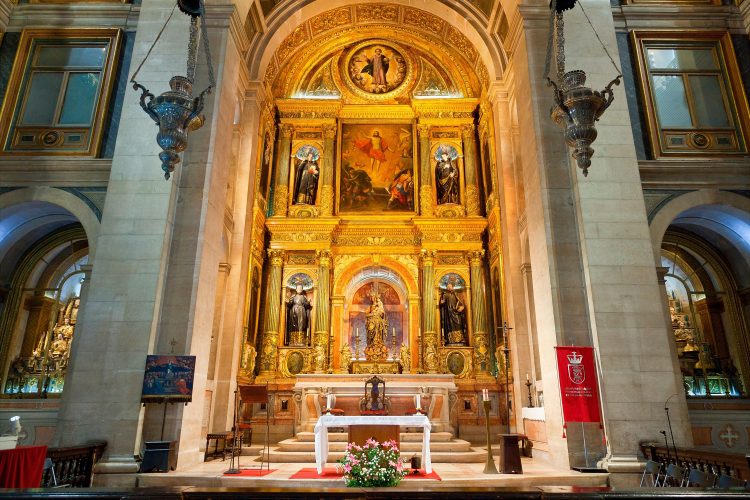 While its exterior is plain, São Roque Church is breathtakingly beautiful on the inside | © John Kellerman / Alamy Stock Photo

Climb up the steep Calçada do Duque steps from Rossio square and you’ll emerge at this church: unassuming on the outside, fabulously ornate on the inside. Designed in Rome and shipped to Lisbon in 1747, its baroque chapel is lavishly adorned with gold, lapis lazuli, marble and azulejos. The adjacent museum is crammed with sacred art. The church sits on the edge of the Bairro Alto district, part of the Lisbon Essential Tour. 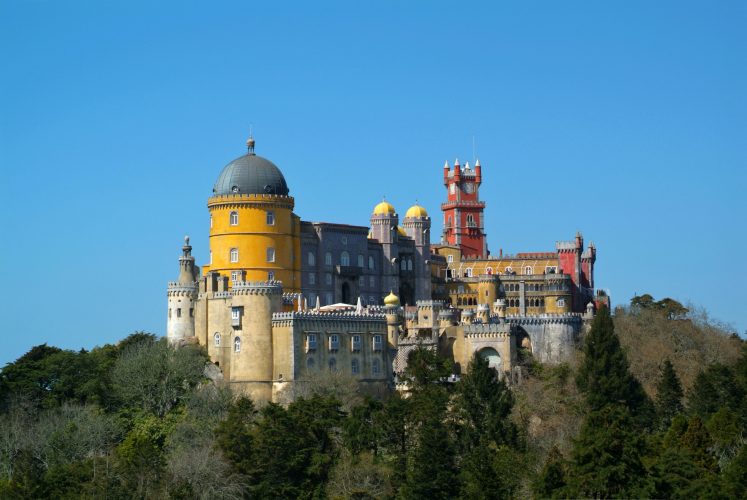 Of Sintra’s extraordinary clutch of romantic era palaces, villas and castles, none is crazier than Pena Palace, set high on a wooded hill and framed by folly-dotted botanical gardens. King Ferdinand II’s fervent imagination gave rise to this fantastical Moorish-Manueline creation in the mid 1800s, with its riot of candy-coloured domes, spires and fortifications. It’s a 40-minute train ride from Lisbon Rossio to Sintra. Advance ticket bookings are advisable at busy times. 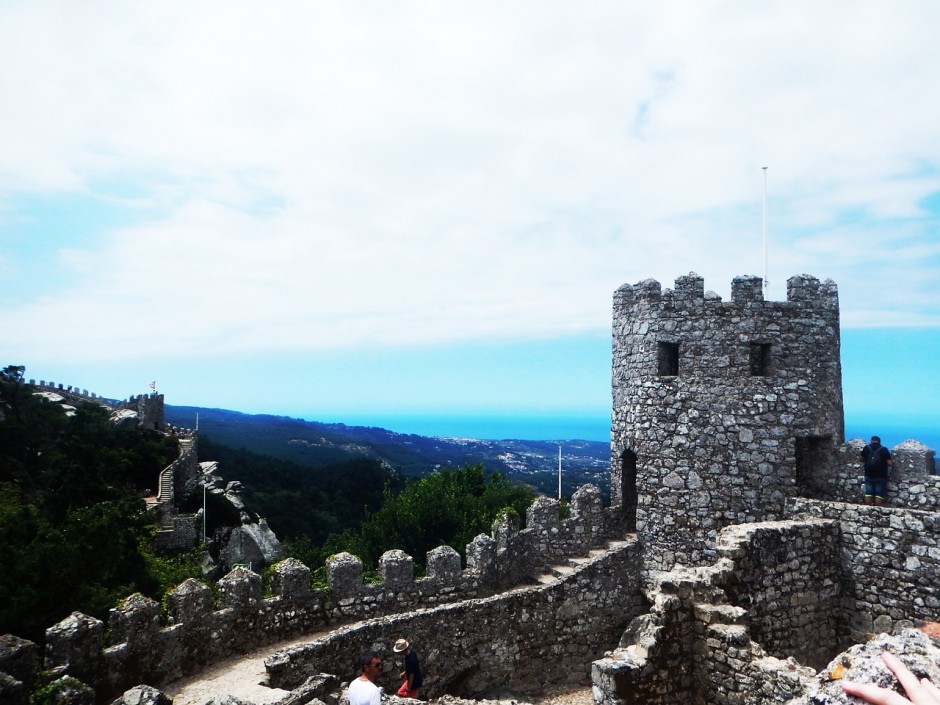 Castle of the Moors © Pixabay

Perched above thickly wooded, boulder-speckled hills in the dreamy Unesco World Heritage town of Sintra, the romantic ruins of this medieval Moorish castle wow with views reaching as far as the Atlantic on clear days. It’s well worth the hike up for the panorama from the snaking ramparts alone. Fast-track tickets allow you to beat the queues.