Working across mediums as diverse as film, comics, and paintings, Polish artist Wilhelm Sasnal demonstrates an insatiable appetite for imagery, with references borrowed from popular culture, personal photographs and films. His work – sometimes a reflection, and sometimes a question mark – concerns itself with the role of the image in representation. We take a closer look at the artist and his paintings. 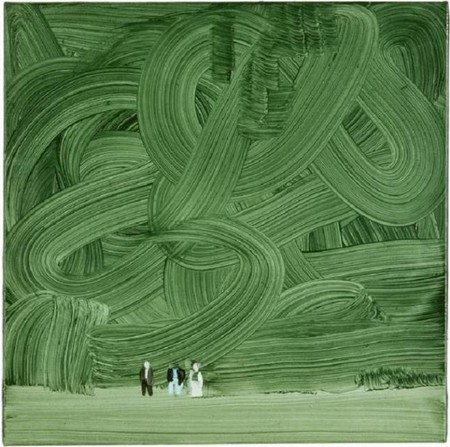 Wilhem Sasnal, born in Poland in 1972, collects and consumes images, very often without reflecting on the exact nature of this attraction: ‘There are things that intrigue me,’ he has stated in interviews. Sasnal came into prominence in the early 2000s when painting was undergoing a revival of sorts. And fittingly, for him, the medium of painting not only functions as a critique of images per se, but as a medium of image consolidation; a space where the edition of images is at its most efficient.

A sense of playful variety permeates the work of Sasnal. His paintings are perched on the border between the abstract and the representational, between the physicality of paint and the illusion of space, thus never really belonging to any one genre. His work has the ability to shift between critical self-awareness and blissful, expressionistic painting.

In practical terms, Sasnal insists on keeping a workmanlike approach to his paintings by attempting to finish each work in a single day. This goes contrary to the majority of oil-based methods that require longer drying times (such as glazing), and often results in awkward impasses, where an image that is of interest one day may become tedious the next; as such, a fast, spontaneous approach is required of the artist, yet one that comes not from an unknown, mystical force, but rather corresponds to a sense of post-industrial practical output.

It shouldn’t come as a surprise, then, that Sasnal was born in the industrial town of Tarnow, at a time when Communism was still at the height of political and cultural ideology of Eastern Europe. Despite the years that have passed since then, the nightmarish hold of the Communist regime on the imagination is a recurring subject in his work. In ‘Portrait of Rodchenko, Lady’, Sasnal recaptures the iconic image of Soviet ideals as seen through the lens of Rodchenko’s camera. Yet the painting seems nostalgic, almost to the point of pity, and the dark colours add a rather sombre mood, imbuing the image, in retrospect, with a sense of unrealised potential. This appropriation is typical of Sasnal and might ultimately be part of his larger ‘theme’: the collection and reinterpretation of images through painting. 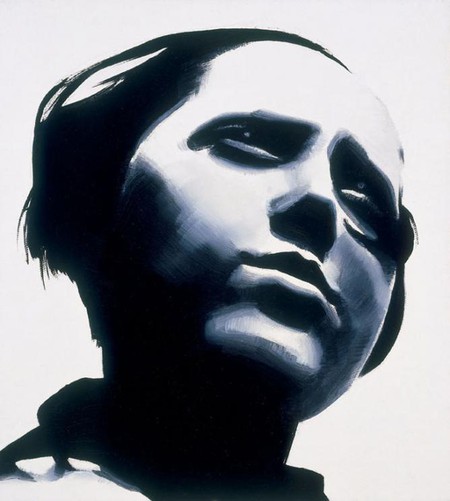 Sasnal also ‘plays’ with ideas on how paint is both material, and an idea with which we describe history. In ‘Shoah (Forest)’, small figures are overshadowed by large slathers of paint which cannot – and don’t seem to want to – escape their own identity as brush marks. In no way are we led to believe that this is a realistic forest. However, its description reiterates the fallacy of painting. After all, imagination can lead us to ‘see’ a forest, and the artist may merely point the way; it can also lead us to reflect on the nature of stories, where the characters find themselves at the mercy of their creator. Referencing the Holocaust, ‘Shoah’ is a powerful word that immediately provokes the viewer to become alert, and rapid associations are drawn up. Beware of images, Sasnal paradoxically argues – they might mean more than just slathers of paint.

Sasnal’s plethora of styles includes influences from photography and film, graphic novels such as Maus by Art Spiegelman, art history, diagrams, and personal photographs. In ‘Maus’, for example, Sasnal depicts the character of a Polish citizen in the graphic novel of the same name, a modern fable about the Holocaust in which Poles are represented as Pigs, the German Nazis as Cats, and the Jews as Mice; metaphors whose connotations are not lost on Sasnal. A sense of complicity seems to be present as well, since Spiegelman’s portrayal of Poles in the Holocaust is not a particularly sympathetic one. But the aforementioned influences are numerous, and rich, and should be explored in more detail.

‘Bathers at Asniéres’, a reworked fragment of Georges Seurat’s famous painting, focuses on a young man sitting on the edge of a riverbank. A sense of solitude, and perhaps rumination, a sensation arguably irrelevant to Seurat’s optical experiments with the large canvas, permeates Sasnal’s canvas. Here, the colours are reduced to moody blues and greens, and a sense of emotion, rather than formal aesthetics, is what is most prominent. Sasnal seems to claim this part of the painting for his own, reiterating the opinion that his gaze is as important as the original artist’s, and that by reinterpreting it, he demonstrates the power of art: we all perceive something new and original when faced with an artwork. 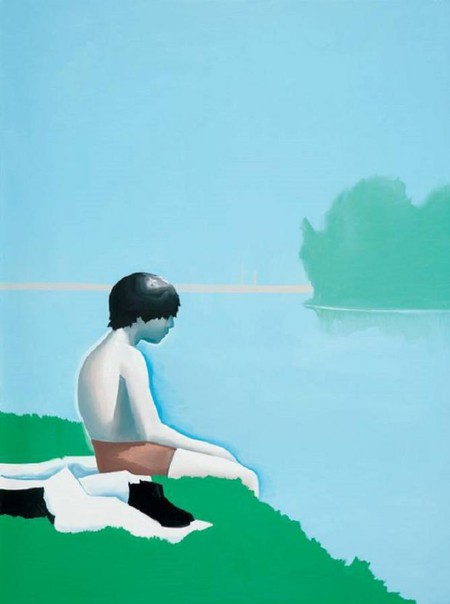 ‘Kacper’ shows an androgynous figure with his back to the sun, an effect that makes it impossible to see any details of the figure itself. Here, the artist has portrayed his son as a snapshot, as a partly faded memory, but mostly as an homage, an ode to his child. This, perhaps, is the crux of painting: recreating what we hold dearest in the most fascinating, yet simplest way possible. 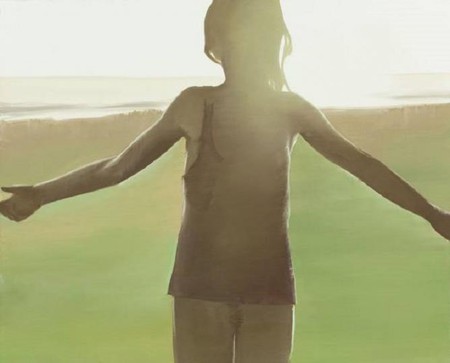