Why You Should Visit Warsaw, According to Local Artist and Architect Tytus Brzozowski 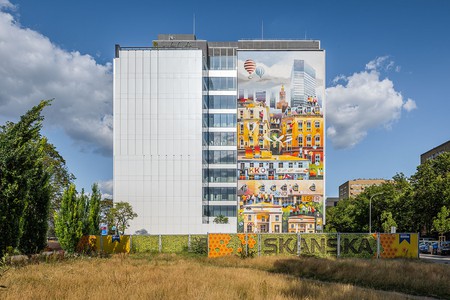 In addition to his surreal watercolours, Tytus Brzozowski has worked to adorn the streets of Warsaw with vibrant murals, like this one in the Wola district | © Tytus Brzozowski

With his depictions of Warsaw blending fairy tale and reality, architect and watercolourist Tytus Brzozowski thinks the Polish capital has a magical air. He gives Culture Trip the low-down on his favourite places in Warsaw and why he thinks it should be your next travel destination. 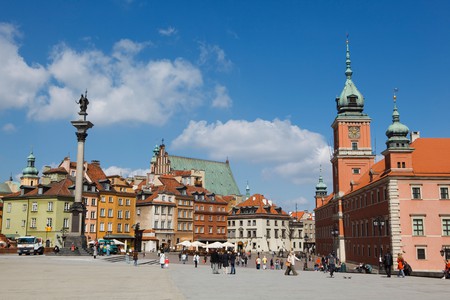 Why should you visit Warsaw? Though often imagined as a drab cousin to the more picture-perfect Kraków, Warsaw has its fair share of treasures: a burgeoning foodie scene; a diverse cityscape encompassing a 19th-century citadel, the colourful Old Town, and monumental Communist-era architecture; abundant green space; and street art, to name just a few.

Dubbed the Phoenix City for its miraculous post-war resurrection, Warsaw is the beating heart of Poland, where a proud sense of tradition and culture meets modern-day innovation. Much of Warsaw was razed to the ground during World War II, but has since seen decades of rebuilding and revitalisation since then. Warsaw is, nonetheless, steeped in history, from grand Baroque friezes to austere Communist-era structures. Much of the city’s past has been immortalised in vivid, award-winning museums, and is also remembered at street level, with signs and plaques embedded into pavements: there’s something to look out for at every turn. 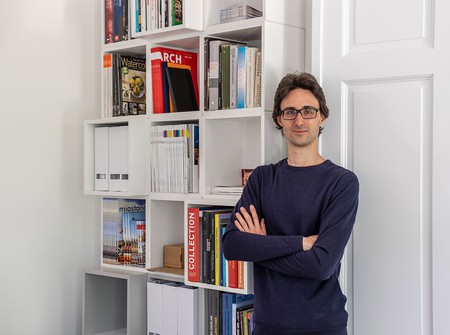 The lay of the land

Warsaw folds out like an origami sculpture: the city parks, swathes of green capped with neat little squares, run into town houses picked out in pastel and ivory – and every street has a different flavour, with no two neighbourhoods the same. Brzozowski thinks it’s best to try to discover a new side to the city, beyond the bustling Old Town and Brutalist architecture.

Warsaw’s hidden beauty lends itself well to watercolour depiction, and Brzozowski’s artwork is all about finding new worlds within the existing cityscape of his beloved home town.

The striking blocks of colour in his watercolours give way to fantastical bird’s-eye views, part sci-fi and part Escher – yet tethered to recognisable landmarks that almost jump off the page. His pictures depict what he calls the “different moods” of each neighbourhood almost as miniature kingdoms; from above, the fabric of his Warsaw slots together like a soft-hued mosaic.

“It’s a vibrant city that is developing really fast,” he says. “Warsaw is an amazing compilation of present and past. Its image has been defined by many centuries of both success and prosperity, as well as disasters and unfulfilled ambitions.”

His work might show a Warsaw that can only exist in dreams – but the city has certainly been thriving over recent years, with soaring new high-rises and state-of-the-art attractions. On a more practical level, Warsaw has an extensive public transport system of buses, trams and the metro, which knit together the many faces of the city. The two metro lines are currently being extended, and the city is also ambitious to become more eco-friendly, with aims to have nearly 400 zero or low-emission buses in two years’ time, alongside plans for environmentally friendly trams to promote ecological transport. Trams trundle in and out of the gaping doorways in Brzozowski’s artworks, too.

“It’s a city full of nostalgia on one hand and great economic growth on the other,” he says. 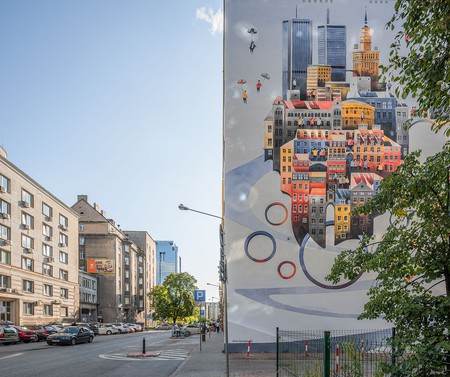 A city of neighbourhoods

You only have to look around the city centre, Śródmieście, to see how Warsaw is growing. Even its Communist centrepiece, the behemoth Palace of Culture and Science, is taking on new life – it’s now home to the lively Bar Studio, where residents spill onto the tables to bask in the sun of the square by day, and take part in animated panel discussions, or a cocktail and a concert, by night.

But Brzozowski encourages an escape from the hustle and bustle, and a walk through the city, to see its unique charm. “It is a very green urban area – there are plenty of parks and gardens with old royal palaces,” he notes. He recommends that visitors first get a sense of the whole city by ambling along the Warsaw Escarpment – what he calls “the historical and cultural backbone of the city”.

“On it, one can find most interesting buildings from the past,” he says. “It goes all the way through the city and it’s also very green – in fact it’s a group of parks connected by footbridges.”

Start at the verdant paradise of Żoliborz in the north of the city – its maze of leafy streets and flourishing boulevards splays out and curls towards the river, where you’ll find the Escarpment. An alternative is to stop for a bite to eat at sun-kissed Prochownia Żoliborz first, where you can sip strong coffee under fairy lights inside the walls of the Citadel.

“One of Warsaw’s strongest assets is its gastronomy,” says Brzozowski. “Hundreds of great restaurants and cafeterias are to be found here.”

Warsaw has everything for the travelling foodie: a plethora of upmarket establishments, hidden gems – one is the bright Kawiarnia Fawory on Żoliborz’s main thoroughfare – and themed restaurants and bars. Through the city, street corners also boast sweet-smelling bakeries where you can pick up bulging doughnuts as you browse what the city has to offer. 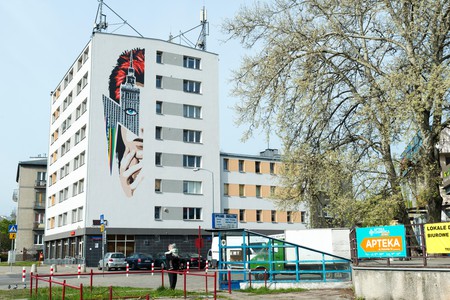 Brzozowski, however, suggests the Vistula River is the best place to find “something very special”.

“It divides the city into two pieces, creating two wonderful riverbanks of two different characters,” he explains. “On the left site – the one closer to the city centre – one can find modern and very well-designed metropolitan boulevards with restaurants and pubs. You can sit on the bench or stairs and watch impressive bridges be beautifully lit up.”

Here, you can stumble into riverside restaurants or onto café terraces, or take a stroll with a drink from one of the pop-up bars that line the boulevard in hot weather. It has the air of endless summer.

But Brzozowski also recommends visiting the right side of the river, which he says has a completely different mood. “It is wild and full of trees,” he says. “You can find a running path here, make a bonfire or just spend some time on a beach watching the historical Old Town and modern towers of the city centre.”

Warsaw’s eastern side, Praga, has recently begun to shake its long-standing reputation for being a rougher area of the city. Now the area is an up-and-coming creative neighbourhood where you get an authentic flavour of the city’s past – Praga was one of the only areas of Warsaw to be left unscathed by the Nazi destruction of the city in World War II. Here you can also enjoy one of the city’s best nights out at the clubs at 11 Listopada Street, as well as admiring street art and enjoying a brew at one of the area’s many hipster coffee joints.

And just down the road is the cream, clean Saska Kępa: almost Parisian, the district includes a cluster of dramatic 1920s and 1930s Modernist houses alongside boutiques and colourful restaurants. Try friendly Halas Vinyl while you’re there – it’s a café, complete with 1920s Art Deco balcony, which is situated in what appears to be a neighbourhood cul-de-sac, and includes a vast vinyl collection to browse while you wait. 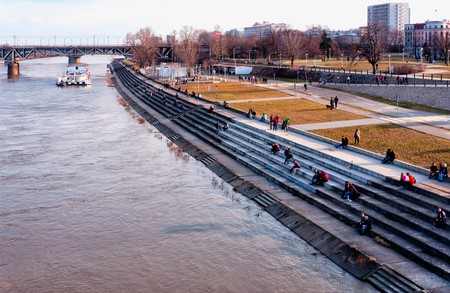 Beyond visiting the Polish capital’s many galleries – which include the National Museum in Warsaw and the Museum of Modern Art – Brzozowski recommends wandering the streets to find an organic artistic side to the city, imprinted on its walls.

There are three murals by Brzozowski on the city walls, among many others commemorating the country’s history and cultural life. Around Wola in particular, a district packed with history in the west of the city centre, vibrant licks of paint smudge onto crumbling remains of pre-war brickwork, uniting past and present. One of Brzozowski’s murals is in Wola, too: the large painting depicts slices of the capital across time, with age-old buildings tucked in next to the new.

The magic of the city, Brzozowski says, exists on and off the canvas.

“The idea of my paintings is to search for the mood of Warsaw,” he explains. “I use various elements of its landscape and architecture – buildings from different parts of the city and different times – to make new places that are still local, despite the paintings’ fairy-tale character.” 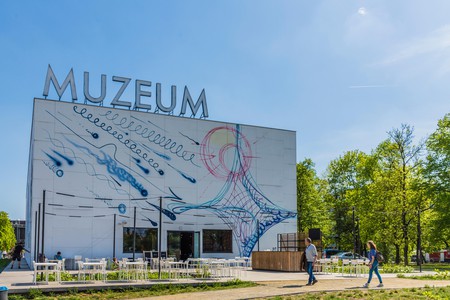