Where to Stay in Warsaw: A Neighbourhood Guide to the Polish Capital 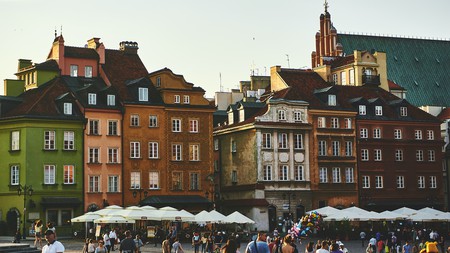 Once you've seen Warsaw's famed attractions, really get to know the city by exploring its diverse neighbourhoods | © Alexey Topolyanskiy / Unsplash

Warsaw might be packed with well-known attractions, like the brooding Palace of Culture and Science and peach-coloured Royal Castle, but local artist Marek Sułek believes the city is much more than these iconic landmarks. With his help, discover how each of Warsaw’s distinct neighbourhoods has its own treasures to find.

“Warsaw is a very interesting city – different from any other European capital,” says Marek Sułek, an artist whose sculptures can be found across the city. Though Warsaw had previously been neglected in favour of its enchanting, historical sister, Kraków, visitors are now flocking to Poland’s capital too, which has smartened up its act with new, award-winning museums and attractions. Culture Trip spoke with Sułek about his views on what makes each neighbourhood and area of Warsaw special, and the best places to stay in the city.

One of Sułek’s most famous sculptures is his City of Angels – cheery characters perched on a stone slab – and these flank the entrance to one of Praga Północ’s liveliest areas, Ząbkowska Street. “Most of the hidden gems are located in Praga district, a place where social and artistic life is thriving,” says Sułek – and at its heart is one of the oldest streets in Warsaw.

Electrified and colourful in summer, Ząbkowska Street has it all, from street markets and concerts, to cosy cafés and restaurants. “This is one of the most popular streets of all in Praga,” Sułek adds.

He suggests visiting the Stara Praga café, opposite his City of Angels sculpture, which has a historic interior, including pre-war furniture. The whole area is a treasure trove of history and Sułek recommends a walk around Praga Północ to see the “beautiful but forgotten courtyards” of the old tenement houses. “It is seen as a kind of an open-air museum,” he says.

Only a short distance away, Sułek recommends heading to Koneser Square – an area with a completely different vibe to the classic Ząbkowska, which is “located in the very heart of Praga”. According to Sułek, it’s “a very modern centre of culture and leisure”, with a lot to see and do. Visit the Vodka Museum, an homage to one of Poland’s best-loved products, housed inside a neo-Gothic building which used to be the location of a vodka factory. Head to nearby Galeria Wileńska for a spot of shopping, or take a stroll through Park Praski to the Warsaw Zoo.

Sułek also recommends visitors wander to the southern district of Praga, Praga Południe. On the border between Praga Północ and Praga Południe lies Warszawa Wschodnia – Warsaw’s Eastern Railway station – which Sułek says is a prime example of communist architecture in the city. He suggests exploring the area where the two districts merge, where you can see the longest communist residential building in Warsaw – affectionately dubbed Dachshund – which stretches into the distance at a bewildering 508m (1,667ft) long.

In the heat of summer, it’s worth a walk down Aleja Zieleniecka towards the National Stadium. Though the stadium itself hosts impressive events, here you’ll also find some of Warsaw’s popular beaches, including Poniatówka, which was first used in the interwar period.

Close by is the glamorous Saska Kępa – a host of 1920s buildings, where you can enjoy a bite to eat in cosy cafés and restaurants.

Heading east is the industrial-looking Soho Factory. Sułek recommends a tour of this area, which includes the ever-instagrammable Neon Museum. The museum helps to save and restore the inventive neon signs which once decorated the city, and proves a popular attraction with visitors.

After you’ve explored Warsaw’s neon history, says Sułek, “treat yourselves with a good dinner at the restaurant Warszawa Wschodnia, which is located in an old factory building.” The restaurant, which is open 24/7, serves Polish and French cuisine, and diners sit at a giant table in front of the kitchen, where they can watch their meals being prepared.

Powiśle, which borders the river Vistula on the western side of the city, is rapidly becoming one of most attractive and happening places to visit in Warsaw. Sułek describes it as a “thriving neighbourhood with many modern and trendy places”. A selection of new museums have popped up here in recent years, from the Copernicus Science Centre, to the riverside Museum of Modern Art, and the verdant Warsaw University Library – where you can buy an ice cream or a coffee to take up to its free rooftop garden. Sułek also recommends the newly opened Elektrownia Powiśle, “a complex for entertainment and business created in the place where the old power station once stood”.

Another of Warsaw’s most famous attractions, the vibrant Old Town is a must-visit, with its quaint, peach-coloured townhouses and charming cobblestone streets.

But the attractions are not just to be found in the main square. “Going in the direction of the Old Town you can stop by at Pawilony,” says Sułek. This is a collection of bars just off Nowy Świat, hidden from the tourist trail. Across the road, Chmielna Street also boasts charming restaurants and bakeries, alongside an extensive book market. Try OKIENKO for some perfectly golden fries, with homemade dipping sauces, before popping next door to the classic Cukiernia Pawłowicz for a dainty rose doughnut.

The bustling heart of Warsaw, Centrum is the location of one of Warsaw’s most well-known buildings, the Palace of Culture and Science, from which you can take in a view across the whole city. he Złote Tarasy shopping mall – or the Bubble Mall – is close by with its distinctive undulating glass roof, while the area is also home to numerous museums and cultural institutions.

“In the very centre of Warsaw, next to the De Gaulle Roundabout, there is an interesting modern building,” says Sułek. Like much of Warsaw’s architecture, this building, at 6 Nowy Świat – a stocky, greying structure, studded with windows – is also packed with history, as the former centre of the Communist party. Nowadays, it’s home to the Banking and Finance Centre and is buzzing with life. “In the social realist courtyard there is a fountain, modern pubs and bars,” Sułek says.

North of the city centre, Muranów is also worth a visit. Sułek describes Warsaw as “a unique combination of modernity and tradition, built on rubble from scratch,” and there’s no better example of this than Muranów, which used to be inhabited by much of the city’s Jewish population. But after the horrors of war, the district changed its character, and is now home to brooding Communist-era housing blocks, with little left of its more distant past.

Sułek recommends visiting the award-winning POLIN Museum of the History of Polish Jews – a vast testament to the rich history of the Jewish community in Poland, spanning a millennium.