Łeba is famous for its coastline, so make sure you give the beach a visit. With its golden sands, crashing Baltic waves and summer buzz, the town is often named in lists of Poland’s best beach towns. Epic sunsets, beachside bars and melting ice creams add to the appeal of this beautiful stretch of sand in northern Poland. 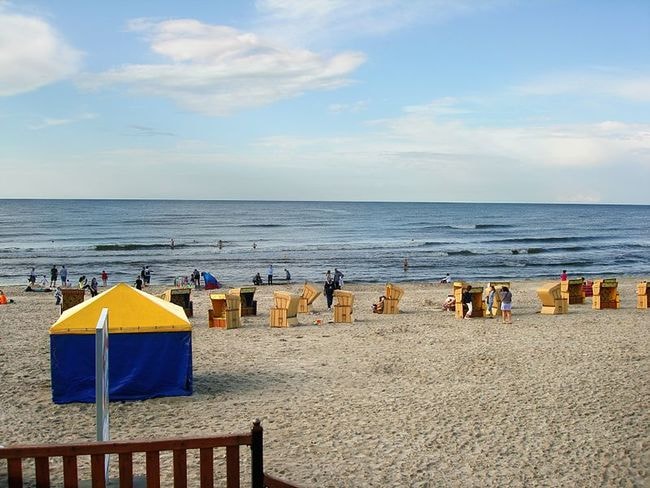 Hotel
© Hotel Neptun
Spend a night right by the beach in Łeba’s iconic Hotel Neptun. This stunning hotel resembles an old castle and offers scintillating views over the Baltic Sea. In the nineteenth century it was a casino.
More Info
Open In Google Maps
1 Sosnowa, Łeba, 84-360 , Poland
+48598661432
View menu
Visit website
Visit Facebook page
Send an Email
Give us feedback

Nature lovers will marvel at Łebsko Lake, which is just one of many natural lakes in and around Łeba. It is a part of Słowiński National Park. Despite its location, it was never directly joined to the Baltic Sea. It was formed because the sea level rose and flooded into the gap in the meadows forming a lake. 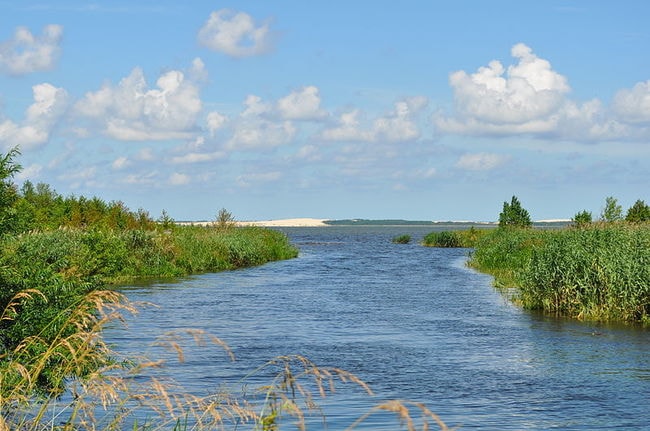 Park
Łeba’s Labyrinth | © Łeba Labirynt
Łeba seems to have an air of freedom about it, made evident by the amount of quirky theme parks and adventure places. Łeba Labirynt Park is a mini theme park with an outdoor maze to get lost in, as well as climbing frames and other games like Snooker.
More Info
Open In Google Maps
Wspólna, Łeba, pomorskie, 84-360, Poland
+48531121697
View menu
Visit website
Visit Facebook page
Send an Email
Give us feedback

This region of Poland has been famous for its amber for generations. The amber is found in and around Gdańsk and all along Poland’s coast. Łeba has a nice little Amber Museum, which explains how historically important the product has been here. There is a shop that sells sculptures, jewellery and even board games all made from amber. 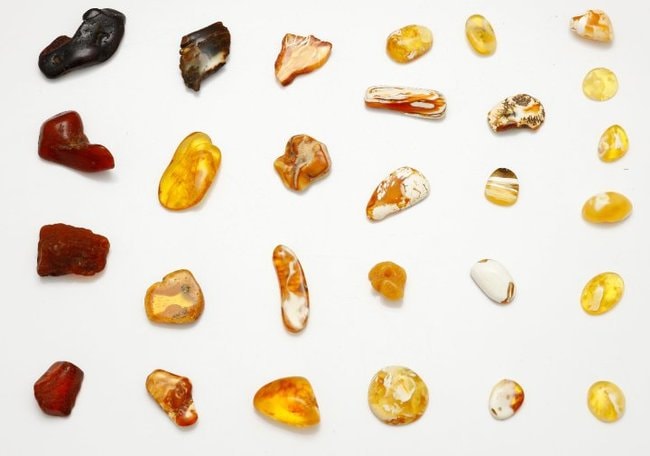 To the west of the city in a forest area on the way to the beach is a sight that is so unremarkable, most people don’t even notice it. It is a tiny piece of brick wall standing on its own. What is it? This is the protected remains of what was once a large church – St. Nicholas’s church. 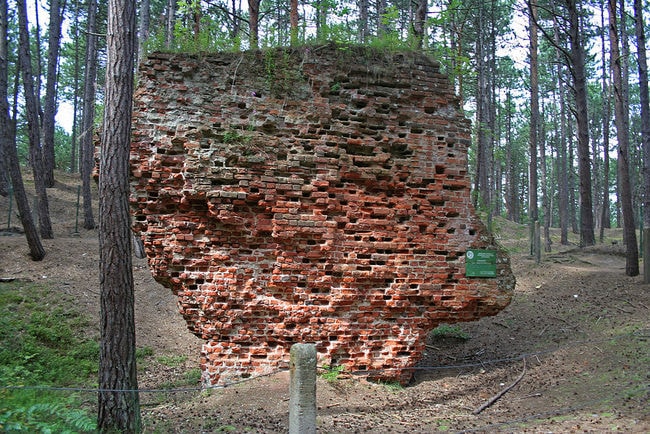 The upside down house

You might have to look twice when you encounter the upside down house (in Polish Piernikowy Dom Do Góry Nogami). This unusual building gets hundreds of photos every day in the summer months, and with similar houses in Szymbark, Zakopane and Międzyzdroje, it’s not even the only one in Poland!

Illuzeum is yet another completely unusual and cool little museum. As the title suggests, it is a museum all about illusions. Inside, you will discover the secrets of optical illusions and all kinds of strange images and funny tricks. You can even learn about a Zoetrope – the world’s first image changer – and how it operates.

Church of the Assumption of the Blessed Virgin Mary

Church
Church in Łeba |  Church in Łeba
There are a few churches in Łeba that merit a visit. The Church of the Assumption of the Blessed Virgin Mary is a small, yet interesting church. It has an impressive brown wooden upper floor and roof, a green dome and is surrounded by trees and shrubbery.
More Info
Open In Google Maps
157 Trakt Lubelski, Wawer Warszawa, mazowieckie, 04-766, Poland
+48226156432
View menu
Visit website
Visit Facebook page
Send an Email
Give us feedback

In the summertime, Łeba is also a great place to party and enjoy good beer and food. Head to the well-known Skansen beer garden, which is near the train station. Here you can try local Łebski beer and eat barbecued food in a cosy little garden with wooden benches. 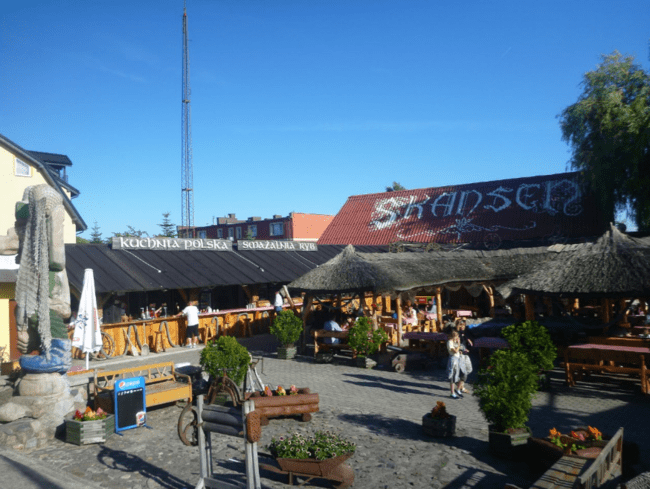 Nadmorska Street is down by the seafront and is a popular street for eating out. A wide variety of cuisines are available in the many bars, cafes and restaurants here. There are also souvenir shops and hotels just a stone’s throw from the beach. 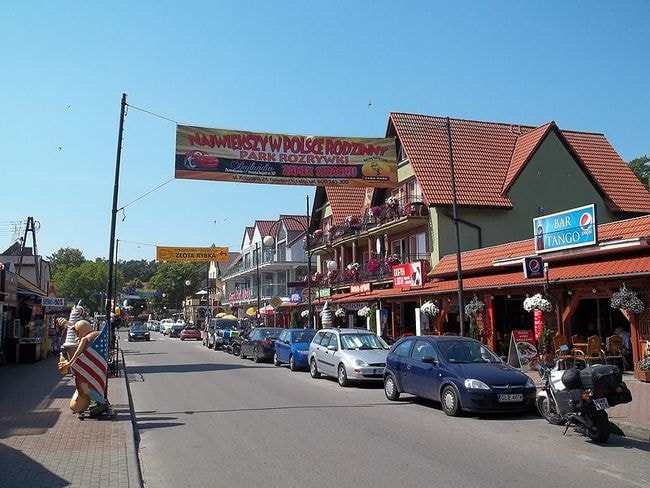 Watch fishermen reel in their daily catch, take a boat cruise or simply sip an ice cold drink while watching the boats come in and out. Łeba harbour is also the place to book tours out to the marvellous Baltic Coast. 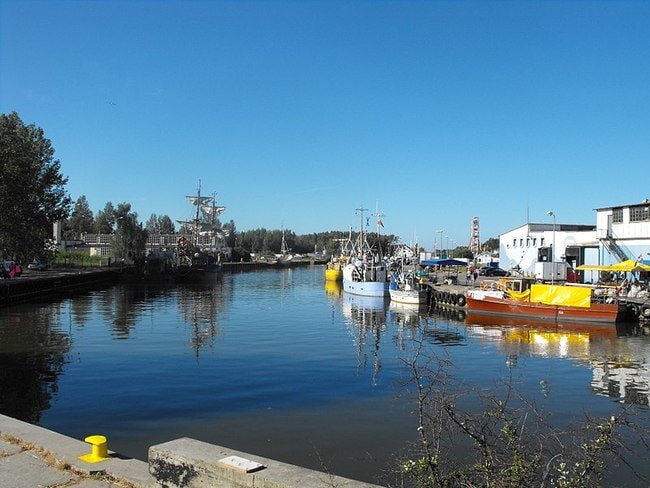 Museum
Butterfly museum | © Leopard Lacewing / WikiCommons
For such a small coastal town, the amount of museums and unusual attractions is Łeba is vast. The Butterfly Museum (in Polish Muzeum Motyli) is a wonderful place for those who love to admire these colourful little creatures.
More Info
Open In Google Maps
5a Wojska Polskiego, Łeba, pomorskie, 84-360, Poland
+48502329066
View menu
Visit website
Visit Facebook page
Send an Email
Give us feedback

This avenue is dedicated to the Polish presidents through the years, including Lech Kaczyński. Kaczyński left his hand print here in 2009 before he died in the ill-fated Smolensk plane crash disaster in 2010. 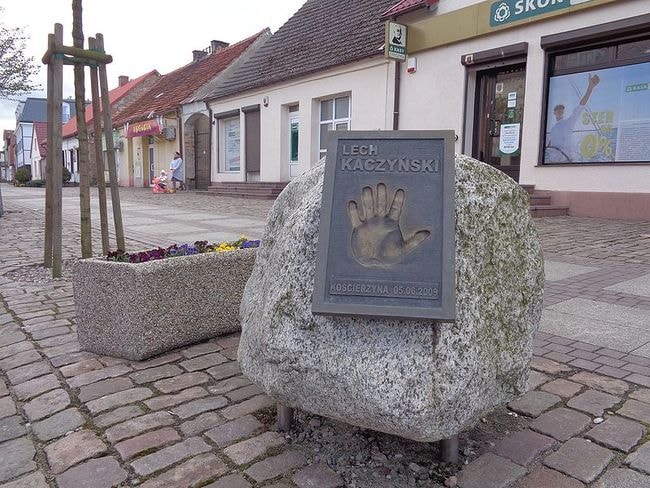 Park, Forest
Amazing moving sand dunes | © Marek and Ewa Wojciechowscy / Trips over Poland
You’ll have already hopefully visited Łebsko Lake, so now it’s time to delve deeper into Słowiński National Park, meaning heading further west to the sand dunes. This will be a pure highlight for your time exploring Łeba as these are moving sand dunes that change shape in the wind. These dunes are the closest thing Poland has to a desert.
More Info
Open In Google Maps
1A Bohaterów Warszawy, Smołdzino, pomorskie, 76-214, Poland
+48598117204
View menu
Visit website
Visit Facebook page
Send an Email
Give us feedback

Park, Forest
Łeba and Słowiński National Park | © Northern Irishman in Poland
On this list, Słowiński National Park is featured three times, which shows how huge the park is, but also how diverse it is. You’ve read about the lake and the sand dunes. Now it is time to explore the forest part of the park. Here you can find interesting trees and plants and there is a superb cycle path to guide you through some of the most beautiful wilderness areas.
More Info
Open In Google Maps
1A Bohaterów Warszawy, Smołdzino, pomorskie, 76-214, Poland
+48598117204
View menu
Visit website
Visit Facebook page
Send an Email
Give us feedback

So you’ve seen the sea lions, now let’s go back in time to the prehistoric era and visit a dinosaur park! On the edge of town, this family-friendly dinosaur-themed park has scary life-size dinosaur models, a mini zoo and a children’s playground. It’s known as simply Łeba Park. Check the website for opening times and special events. 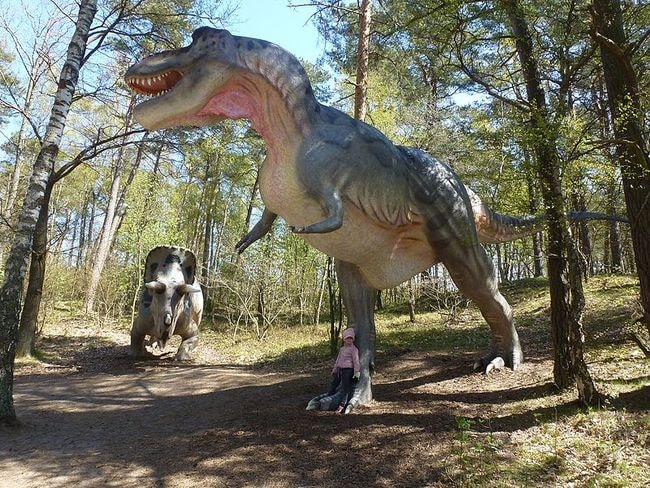 Being on the coast, Łeba is of course home to a lighthouse. Through the years, the city has been a highly important sea port with boats coming and going from the Baltic countries to and from Denmark and Sweden. Stilo Lighthouse has been guiding ships for more than 100 years. It is painted red, white and black and was built in 1904 in nearby Osetnik (formerly called Stilo, hence the name).

There are a few monuments in Łeba, one of which is an old World War I monument that was erected in the gardens near the Church of the Assumption of the Blessed Virgin Mary. The monument was dedicated to those from the region who fought and died in battle. 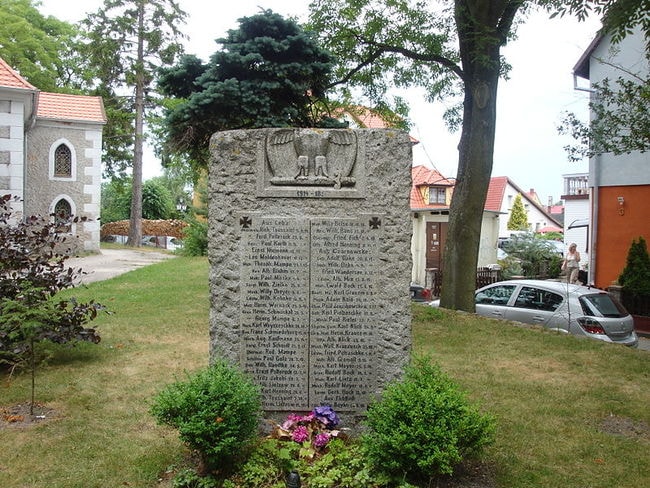