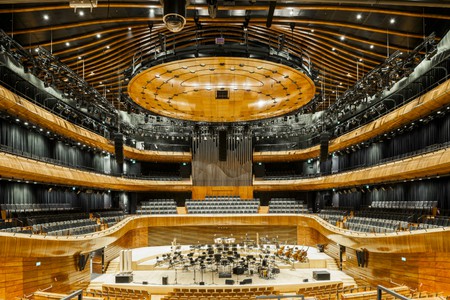 Jimek, aka Radzimir Dębski, is far from your average composer.

Dębski first gained international attention when he won a remix contest for Beyoncé’s track “End of Time,” proving his skills in production and earning a spot on Queen B’s 4: The Remix. You’re more likely to find him wild-haired, wearing joggers and a loose tee, than in a tuxedo, and even when the occasion calls for fancier dress—you can bet he’ll still be rocking some high tops. And in his compositions, Jimek manages to engage the whole orchestra in unprecedented moments of polyrhythmic percussion.

Leaving a comment on his own YouTube video, Jimek assures fans that he understands that his medley doesn’t cover the full scope of hip-hop history.

“Never thought something I did for the love of the music that brought me up would get to this big,” he says. “Thank you everyone that helped spread the word!! I know I didn’t do ALL of the history of Hip-Hop, or everybody’s complete lists, I did miss many greats—but these I wrote down by heart, no research, just beats that changed the game for me. (And YES—of course I did Harlem Shake just because it was f***king impossible to orchestrate!!) Let me know what tracks would you add?? would love to do that someday.”

Watch the astounding composition, and check out its full tracklist, below.