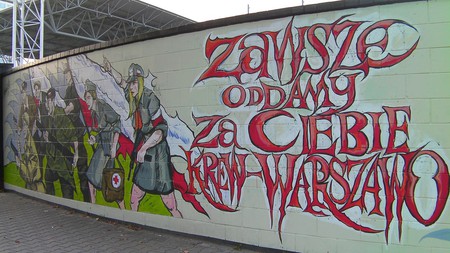 Warsaw‘s streets are packed with arty murals. Some of these unexpected masterpieces are in obvious places, like near Metro Centrum station. Others are on little alleyways the average passer-by would never normally go down. One constant remains – this is a city gleaming with gorgeous graffiti and eye-catching painted walls. So much so that art-lovers and Instagrammers love posting about it on social media. Here are just a selection of the best murals in Warsaw, and where to find them.

Famous Polish composer and pianist Frédéric Chopin grew up on the streets of Warsaw. As well as having a statue, a museum, and some benches dedicated to him, he is also remembered in a few murals around town. The most well-known of these is on the hill opposite the Chopin Museum itself. Slightly off the beaten track and on a side-street near the Legia Warszawa football stadium, there is another mural dedicated to Chopin and his piano. 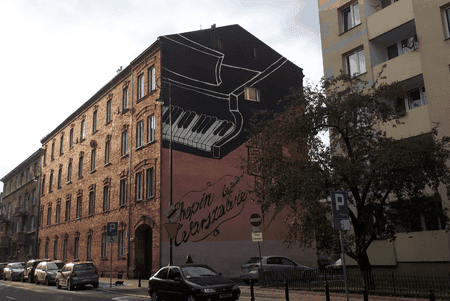 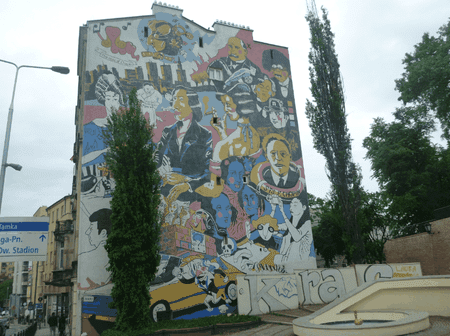 Legia Warsaw and the Palace of Culture and Science

Wander the streets near to the Legia Warszawa stadium and you will see many murals dedicated to the city’s most successful football team. One of the most striking of these is also one of the simplest. The distinctive Legia Warszawa crest appears together with the city’s iconic building – the Palace of Culture and Science. A cat climbs the tower – another reference to the city, as cats secretly “work” in the palace ridding it of mice. 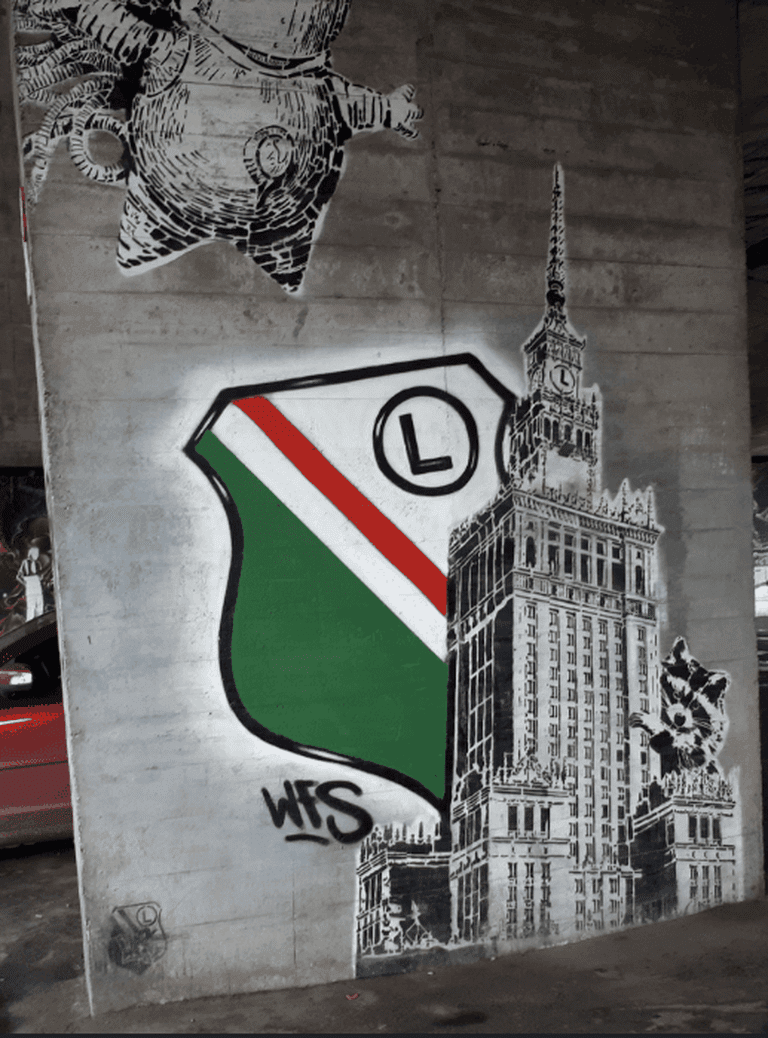 “Why does Warsaw have a quirky David Bowie mural?” you ask. Well it’s simple – David Bowie has a song called “Warszawa”! David Bowie visited Warsaw back in the 1970s and later wrote this dark and sombre ballad about the city. The song is meant to evoke the desolation of Warsaw at the time of Bowie’s visit in 1973. Thanks to this superb piece of graffiti which is in the Żoliborz district, he will always be remembered here. 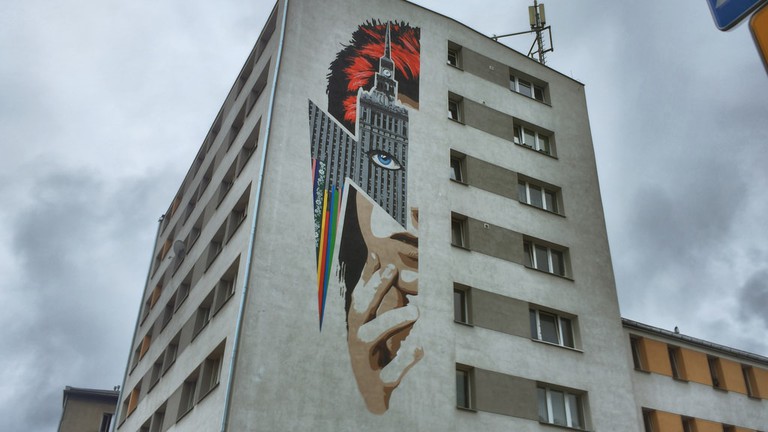 In residential areas of Warsaw, there are new murals being painted all the time. A great example of an unexpected mural is this extremely colourful artwork on the side of an otherwise dull grey housing block. It typifies the city’s formation from the drab communist times to the modern day metropolis where the Polish capital thrives. 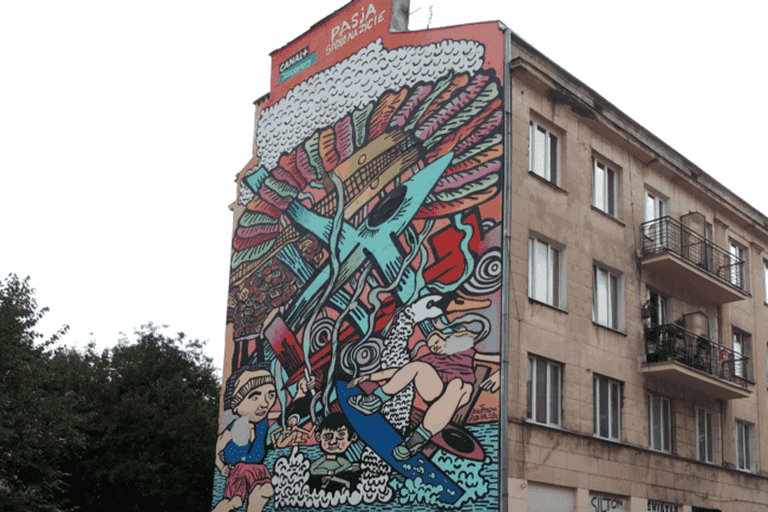 Famous artist Blu takes the credit for this huge mural just round the corner from Warszawa Centralna train station on Aleja Jana Pawla II. This mammoth mural fills the wall and dates back to 2010. Sitting on Warsaw’s widest street, this is perhaps the most visible mural on this list and one of the most photographed. Soldiers are decorated with currency symbols on their arms and holding AK47 rifles in a tribute to Warsaw’s history from the 1944 uprising right up to today’s booming city. 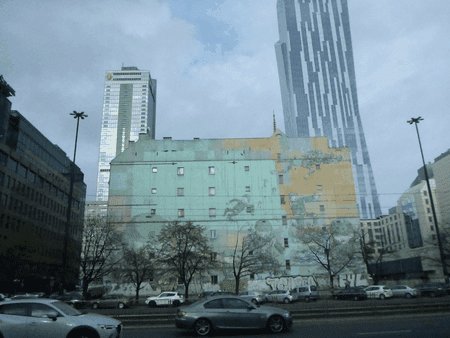 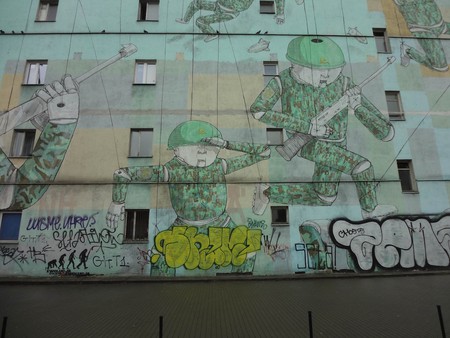 Marie Skłodowska Curie is one of Warsaw’s most famous people. She is still the only woman to have won the Nobel Prize twice, and she did it in two different sciences – chemistry and physics. Marie later moved to France and changed her surname after marriage, while continuing to work as a scientist. This mural is small, but to the point. It is also ideally-situated near the Copernicus Science Centre on a walk down towards the Wisła River. 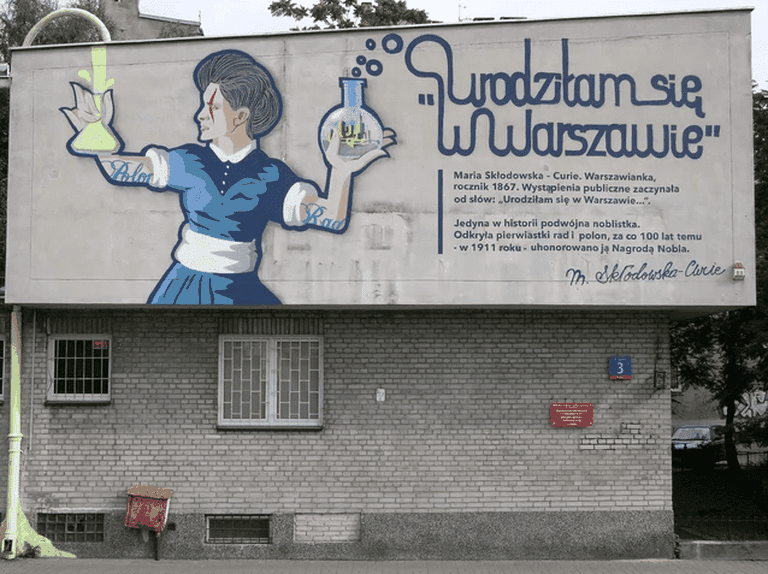 These two murals might be in different parts of the city and by different artists, but the sentiment remains – it’s all about blood. The first of these reads: “We will always shed blood for you, Warsaw” (in Polish Zawsze oddamy za ciebie krew – Warszawa). This poignant mural hits a nerve and is reflective of those who fought for not Poland, but with an emphasis on the city of Warsaw which suffered horrendously during the 1944 Uprising.

The second of these “blood”-related murals reads: “This is a tribute for those who carry scars and who shed blood in the name of our fathers.” Similarly the red, black, and white colours are so typical of Poland as a nation. The Polish writing is: “to jest hołd dla tych co nosza blizny dla tych co przelali w imie ojczyzny.” 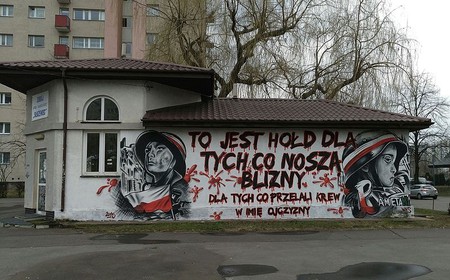 In the quirky bar district of Pawilony, this building has two painted walls in drab grey and black. One merely reads the English alphabet, the other has three bears, in grey. At weekends the area surrounding this building is full of locals drinking in the poky little bars of this famous drinking zone. 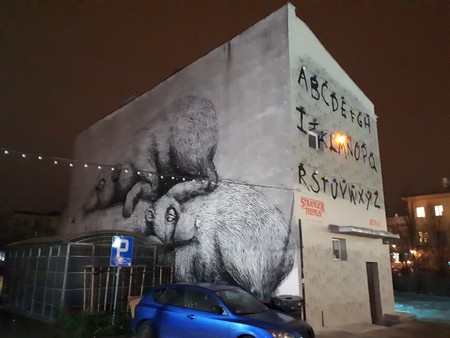 On the entrance to Warsaw’s cool “Pawilony” quarter, just in front of the bears, sits a “Welcome to Hawkins Warsaw” sign. As this is situated in a popular bar area, it has become one of the most photographed murals in Warsaw during 2017. 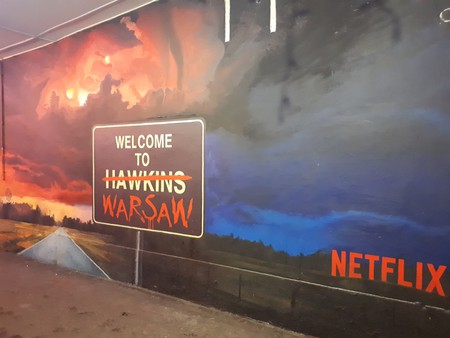 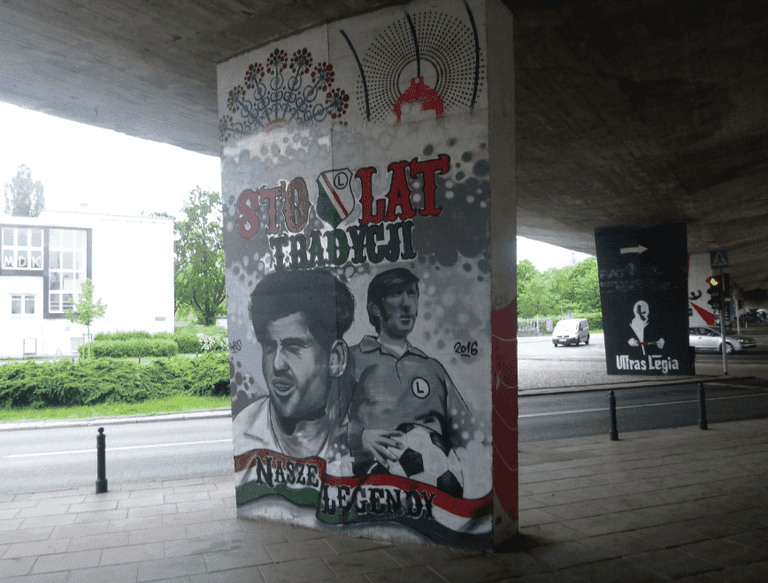 Legia Warsaw murals | © Northern Irishman in Poland
For a series of at least 15 football-related murals, head to the underpass near the Legia Warszawa football stadium, where football fans and local artists have tried to paint every pillar that holds the bridge up. They are decorated with fan clubs, ex-players and some images of the city itself down the years.
Open In Google Maps
3 Łazienkowska, Śródmieście Warszawa, Mazowieckie, 00-449, Poland
+48223182000
Visit Website
Give us feedback

Cross the River Wisla in Warsaw to the trendy up and coming Praga district and you will find more murals, and in less prominent places. The legendary Ząbkowska Street is famous for its bars, cafés and restaurants in the summer months. These days, quirky cafés such as Łysy Pingwin and W Oparach Absurdu give the district a raw edge. Your welcome to the street is now a huge, colourful mural, painted in mid 2017 to represent the music, art and culture of one of Warsaw’s coolest contemporary neighbourhoods. 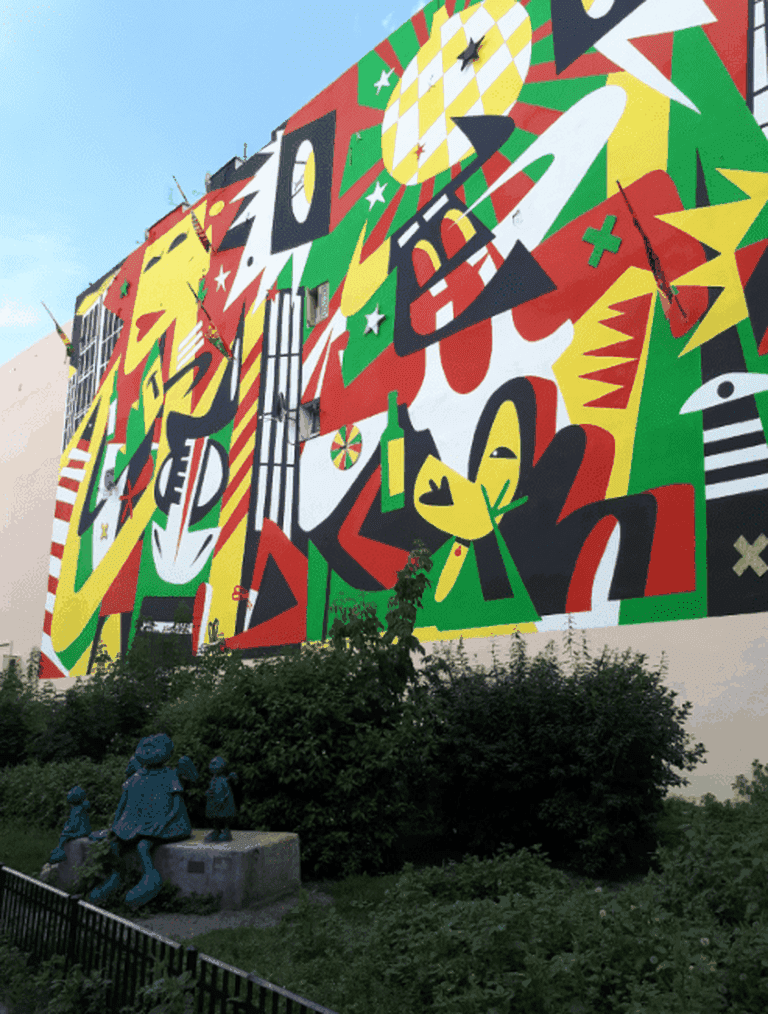 Warsaw’s tram system was given its own mural in 2016, and what a piece of art it is too. Almost like a sneak peak into the tram life from the outside, as the artist tears away the concrete entrance to reveal another Tramwaj working its way through the city. Art also hit Warsaw’s Metro, which had a Christmas-themed train in December 2017, as the city displays its ability to stand out from the crowd.