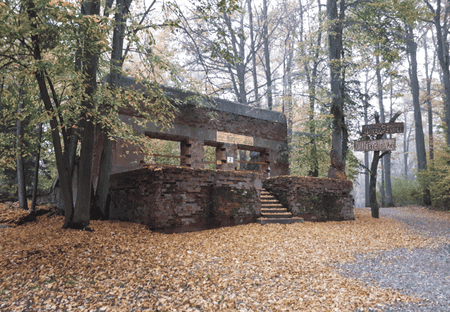 In a deep, lonely forest in Poland‘s Warmia-Masuria Province lies a spooky series of concrete ruins. These grotesque pieces of unwanted history are the location where Nazi leader Adolf Hitler spent over 800 days hiding and planning while the Second World War raged on. These days, tourists can visit this obscure location not far from the town of Kętrzyn. The venue has been opened up as a kind of ‘museum’ to remember what actually happened here. The desolate forest is full of the remains of concrete buildings that were once inhabited by the Nazis, but have long since been reclaimed by nature and covered in trees, moss and shrubs. 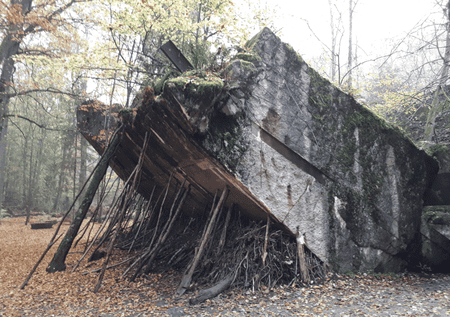 What is this place called?

In Polish, the location is given the name of Wilczy Szaniec, which in Hitler’s native German is Wolfsschanze, and in English it translates to Wolf’s Lair. Wolf was the nickname Hitler actually gave to himself, so this place is as egocentric as it gets. Welcome to the Wolf’s Lair… 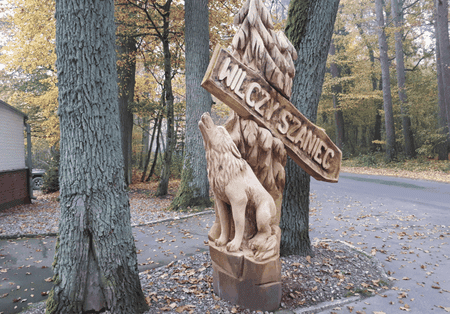 Why did Hitler choose this place?

This tranquil forest was chosen as Hitler’s hideout because of its isolated location, its obscurity and the fact that it is camouflaged. From the air, it appeared to be merely a forest. Tall trees and plants were used to cover up any proof of the concrete bunkers that the Nazis built here. 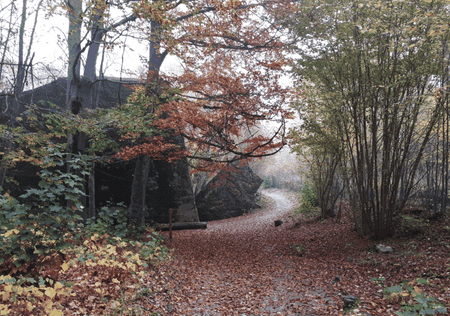 How can you get to the Wolf’s Lair?

1. Book a guided tour – many tour companies arrange tours to the Wolf’s Lair from cities such as Olsztyn and Warsaw; however, these do not come cheap.
2. Hire a car – you can hire a car and drive yourself here. There is a large car park for visitors onsite.
3. Get a taxi – taxis from Kętrzyn are actually not badly priced, and this is often the best option. You can get a taxi from central Kętrzyn for between 30 and 40 złotych (under €10) but always check the price with the driver beforehand. 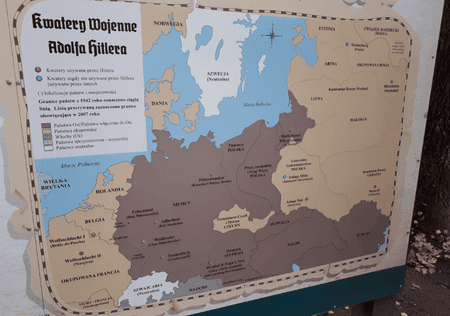 Can you actually sleep at the Wolf’s Lair?

For those brave enough to want to spend a night in this forest near where Hitler once hid out, you can easily organise it. On-site there is a fully functioning hotel, bar and restaurant. Rooms can be booked online or over the phone, and the restaurant serves up a special ‘Wolf Soup’ to add some eeriness to your trip. Alcohol is also available here in the downstairs bar of the old two storey blue building in the forest. 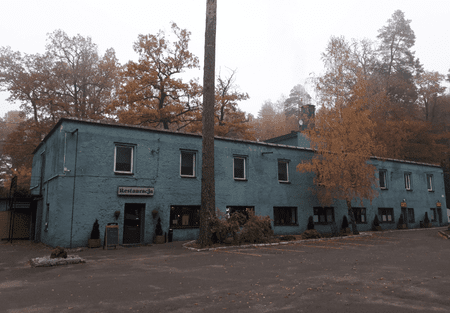 The Hotel at the Wolf’s Lair: Where Hitler Spent 800 Days Hiding | © Northern Irishman in Poland

How much does it cost to visit the Wolf’s Lair?

Aside from your transport getting here, you will have to pay an entrance fee to visit the Wolf’s Lair. Adult tickets cost 15 złotych (€3.60), with cheaper options for students, children and seniors over 65. You buy the ticket from the booth at the checkpoint and entrance to the site, which also has a carved wooden wolf statue sitting in front. The ticket gets you into the entire zone for one day, and the Wolf’s Lair is generally open from 9 a.m. to 5 p.m including weekends. But opening hours can vary, so it is important to check in advance, especially during holiday periods. You will have to pay extra if you want a guide. 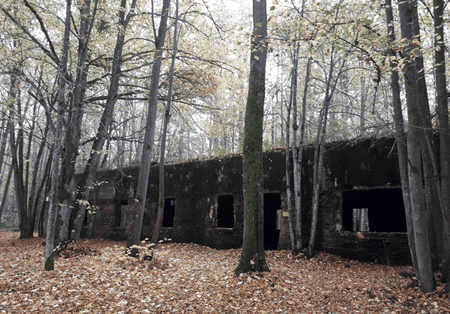 What can you see at the Wolf’s Lair?

It’s a large area to tour at the Wolf’s Lair, and it is more than just a single bunker. In fact there are three long walking trails that you can do. You have a choice of walking on your own or paying for a tour guide. Tour guides are available in Polish, German, Russian, English and a few other languages on request. Generally a Polish guide costs 50 złotych (€12) and a foreign language guide costs 80 złotych (€19), but tour guide prices may vary depending on season, language and size of group. There is a large map at the entrance where you can get your bearings. 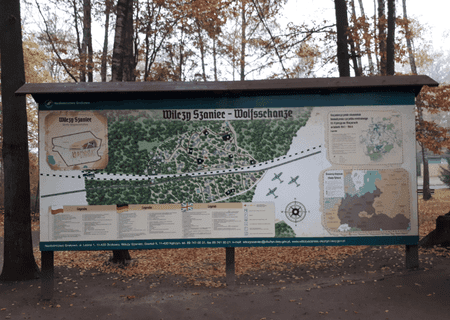 Guidebooks are available starting at 5 zlotych (€1.20) at the small entrance and souvenir shop. They are available in multiple languages. Postcards, key rings, etc., can also be purchased. 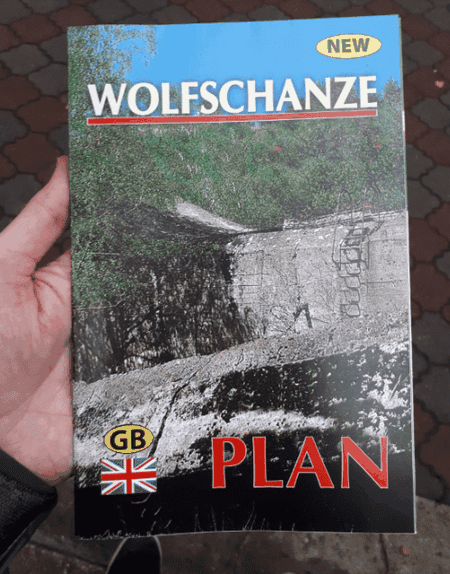 There are three walking trails – marked in yellow, red and blue. Each trail should take approximately one hour. Along the way there are information boards and each location of note is marked with a number that corresponds to the map in the guidebook. Not to be missed is the notorious bunker number 13 – this was Adolf Hitler’s hangout and you will encounter this monstrosity about halfway through the Red Trail. In Polish, it reads ‘Schron Adolfa Hitlera‘, the shelter of Adolf Hitler. 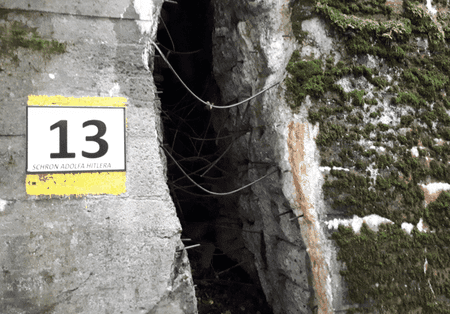 That’s right – it was here in his so-called safe shelter that Adolf Hitler almost died in an assassination attempt, TWICE. There may have been high security at the complex, but that didn’t stop Claus Graf Schenk von Stauffenberg, who made the second attempt to eliminate Hitler on July 20, 1944. Von Stauffenberg sneaked in and attended a conference with Hitler armed with a bomb in a suitcase, which wasn’t checked. He left the bomb in the room and exited, minutes later it exploded just two seats away from Hitler. Hitler survived, but four German Nazis were killed – Brandt, Berger, Schmundt and Korten. The information boards at Wolf’s Lair explain the finer details, and you can visit the location where the assassination attempt took place. It’s not a trip for the faint-hearted. 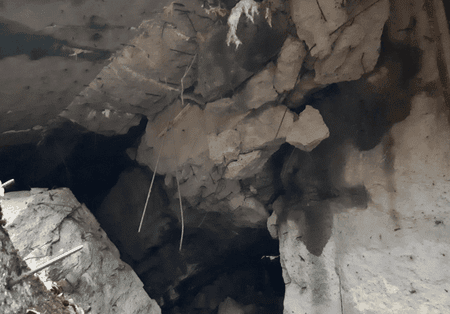 The Wolf’s Lair: Where Hitler Spent 800 Days Hiding | © Northern Irishman in Poland
Give us feedback