The Top 10 Things To Do and See in Krakow

Krakow is a fascinating city that’s complex and surprising; it’s riddled with dark secrets, medieval legends and Polish myths aplenty. Vodka bars adorn the street corners and towering castles top the hills, making for one seriously diverse city. Check out the best things to do while your here in our hit list. 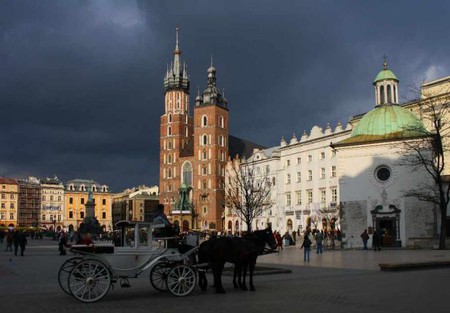 To stroll around the Krakow Old Town is to take a tour of some of Poland’s great and monumental masterpieces; Copernicus’ one-time study home, the Collegium Maius; the exquisite Palace of Art and beautiful St Mary’s Church. And right at the heart of it all sits the sprawling market square, the largest of its kind in all of Europe and the veritable epicentre of life in Krakow since the early Middle Ages. 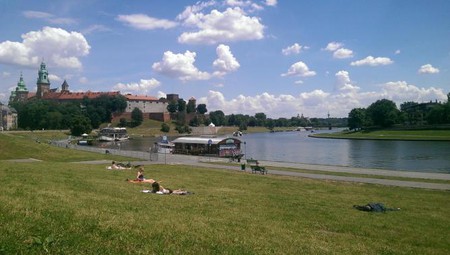 The Vistula and the Wawel Hill | © Joseph Richard Francis

The Wawel Castle and cathedral

Krakow’s Wawel Hill is a fascinating testimony to human inhabitance in this part of Eastern Europe that has yielded evidence from as far back as the Middle Paleolithic era. Today, the hill is crowned with the mighty rises of the Wawel Castle and cathedral – two of Poland’s most iconic landmarks. Each of these comprises elements of the Gothic and the Renaissance, with gold-gilded roofs and vaulted court rooms aplenty. Take a guided tour of the interior to discover the wealth of history and myth that coalesce between the ramparts here.

Krakow is said to have the highest number of bars and cafes per square meter in the world, making it a great place to settle in for a brew or a beer and a spot of people-watching. Internationally, the city is perhaps better known for its vodkas and flavored shots, which also seem to flow from around midday, so don’t worry if you’re tempted! For some of the finest drinking spots, be sure to head down to Kazimierz – Krakow’s historic Jewish quarter.

Colorful, lovable and entertaining all at once, Krakow’s version of the so-called Lovers’ Bridge (a phenomenon that has spread right across the continent since first being coined in Paris) finds its home on Father Bernard’s Footbridge. Everyone knows how it works: couples come to attach a padlock on the bridge and throw the key into the Vistula below in the hope that it will cast their union in iron. A little soppy? Perhaps, but just check out the views of the river and Podgórze district across the water. Oh, and Forum Przestrzenie is always close by for an al fresco beer.

Bar, Cafe, Beer, Polish, Coffee
Facebook
Email
Twitter
Pinterest
Copy link
Share
Map View
A haven for advanced liquor adventurers and curious vodka tasters alike, Wódka Café Bar is a petite but potent little spot that touts an encyclopaedia of Polish vodka styles. With an assortment of more than 100 flavored options and incredible combinations, from sweetened to herb-infused, colored, spiced, and straight, this one elevates this ubiquitous Eastern European tipple to the level of art. There’s also a great atmosphere to chill in and plenty of locals at hand for advice on which shots to opt for.
Open In Google Maps
5 Mikołajska, Stare Miasto Kraków, Małopolskie, 31-027, Poland
+48124223214
Visit Website
Visit Facebook page
Give us feedback

This immersive reconstruction of war-time Krakow goes far beyond the scope of what visitors might expect of the Oskar Schindler Factory of Spielberg fame. Ignoring the expectations of the Hollywood-jaded many in favor of a series of fantastic exhibitions dedicated to chronicling the story of the city under Nazi rule, the center focuses on lifestyle, politics and the hardships faced by the Podgórze Jews and the Polish people more generally. There are, of course, rooms dedicated to telling the story of Oskar Schindler too, and the factory itself once stood right next door.

Visit the Museum of Stained Glass

Museum
Facebook
Email
Twitter
Pinterest
Copy link
Share
Map View
Krakow’s Stained Glass Museum is a testimony to the magnificent processes behind creating stained glass, examining everything from conception to assembly under the gaze of qualified craftsmen and apprentices. Both a museum and a workshop for contemporary artists, visitors can undertake tours that tell the story of the most significant Polish stained glass masterpieces while watching contemporary artists working in the medium. Since its opening in 1902, the collection has also exhibited international pieces from right across the globe.
Open In Google Maps
23 aleja Zygmunta Krasińskiego, Stare Miasto Kraków, Małopolskie, 31-111, Poland
+48512937979
Visit Website
Give us feedback
Book Now

Museum of Contemporary Art in Krakow

Marina Abramović, Ai Weiwei, Trevor Gould and Edward Dwurnik are just some of the incredible artists of international repute on offer at the Museum of Contemporary Art in Krakow – MOCAK. Designed by Claudio Nardi and Leonard Maria Proli, the museum sits in a curious post-industrial setting, on the former site of the enamel factory that belonged to Oskar Schindler. Controversial but authentic at the same time, the art exhibitions here, both permanent and temporary, showcase historical, social and cultural discourses from the past two decades, with a heavy focus on emerging Polish and Eastern European artists.

Pumping with adrenaline and horror at every turn, this terrifying tour takes place in an old building, just behind the market square of Krakow. It plunges visitors into the most macabre and spooky aspects of the city, offering a heart-thumping journey through one of the nation’s first truly interactive museums, all inspired by Hollywood horror and the city’s shadowy Slavic past alike.

Named after Emil Fieldorf, Commander-in-Chief of the Home Army (Armia Krajowa or AK), the museum portrays a vivid picture of the Polish Underground Home Army which fought the 1939 Nazi occupation and resized heroically until 1945, at liberation. Majestic homage to the pioneers who decrypted the Enigma Code, Home Army Museum (Muzeum Armii Krajowej) is a brilliant compendium of stories regarding Polish and Second World War history, showcased along interactive installations and exhibitions. A massive post-industrial unit in a former train station, the museum’s building is re-conceptualized with a modern glass rooftop and unites the veteran and the contemporary Polish spirits.