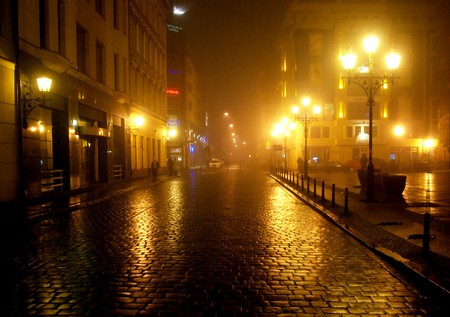 Wroclow, the capital of Lower Silesia, is Poland’s fourth biggest city and a historical melting pot of Bohemian, Austrian and Prussian cultures. Start with a drink to discover the city’s fascinating character; here is our list of the best bars to explore in the historic old town.

Coffee Shop, Coffee, $$$
Facebook
Email
Twitter
Pinterest
Copy link
Share
Map View
Art Café Kalambur is a bohemian spot in Wrocław, hosting regular art exhibitions and a variety of live performances from indie to jazz. This is a great place to sip coffee by day and mixed drinks by night while immersing yourself in Wroclaw’s local arts scene. Due to its proximity to the university, Kalambur is extremely popular with the student crowd, most of whom arrive straight after midday lectures and stay ‘til the early morning comes.
Open In Google Maps
29A Kuźnicza, Stare Miasto Wrocław, Dolnośląskie, 50-138, Poland
+48713439268
Visit Website
Give us feedback

Bar, Restaurant, Wine Bar, Italian, $$$
Facebook
Email
Twitter
Pinterest
Copy link
Share
Map View
Corso has perfected the art of Italian cuisine in the heart of Poland. Their menu is full of authentic homemade Italian pasta, comprehensive cheese and meat selections, and an even more extensive wine list, heavy on Italian imports. This is a perfect choice for a romantic dinner date, and also provides a warm atmosphere for a special family gathering. The Italian owners are happy to explain the history behind each wine so you can learn about the source of every bottle, and don’t miss a chance to experience Corso’s wine tastings.
Open In Google Maps
19/21 Szewska, Stare Miasto Wrocław, Dolnośląskie, 50-139, Poland
+48713375789
Visit Website
Give us feedback

Caribbean and Latin American rhythms, Cuban cigar smoke, and vibrant, colorful cocktails: Case de la Musica creates a Latin paradise in the old town, styled with an eye for 1950s’ vintage. Their menu includes over 400 varieties of high-quality spirits, as well as a number of affordably priced cigars for an extra indulgence. 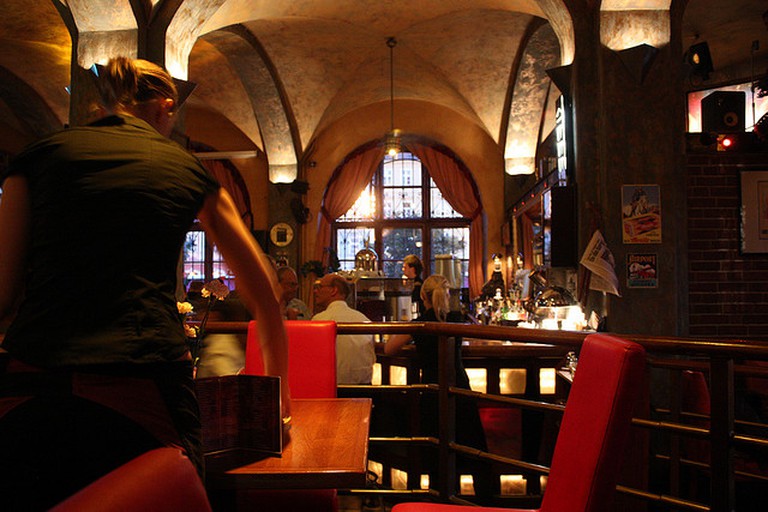 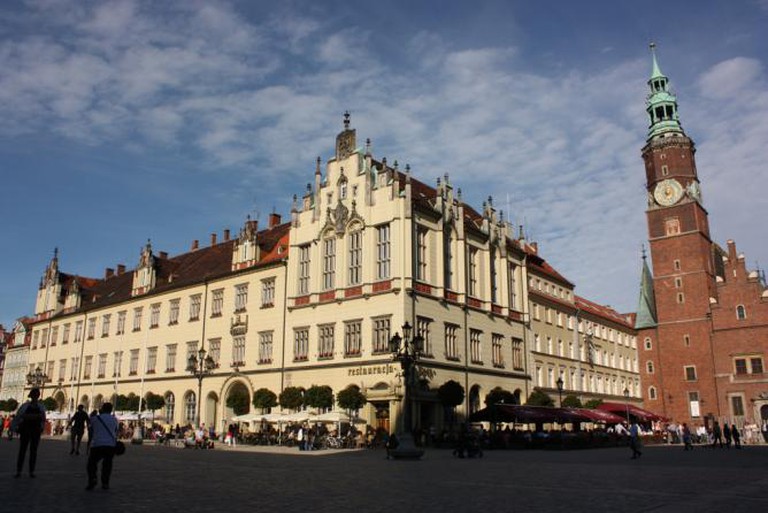 Pod Papugami is located in the heart of Market Square, arguably the most popular area in Wroclaw. Their cinematically lit Old Hollywood interior creates a glamorous atmosphere for sampling Wroclaw’s finest selection of classic cocktails and wines, as well as an outstanding dinner menu rooted in French and Mediterranean-inspired flavors. Live jazz, blues, and DJ sets add to the mood of this sparkling setting, while the outdoor seating gives a great view of the Market Square. Try a timeless Sidecar, Negroni or Pisco Sour, or a refreshing fruity number off their ‘Modern Sounds’ signature drink menu, such as the Misty Apple or the Berry Me.

Kontynuacija is the place to go for beer lovers visiting Wroclaw. This building’s history has been soaked in beer for nearly two centuries, and Kontynuacija keeps the ball rolling with the largest draft selection in the entire city, offering 22 different beers on tap at any given time. You’ll find a wide range of beer styles here from pilsners to stouts, and their drafts deliberately spotlight a mix of local and international craft beers, with a special focus on independent Polish breweries such as Browar Pinta and Ale Browar. If you have any questions about the process behind a particular pint, Kontynuacija’s friendly bartenders double as walking beer encyclopedias.
Kontynuacja, Ofiar Oświęcimskich 17, Wrocław, Poland,+48 792 400 084 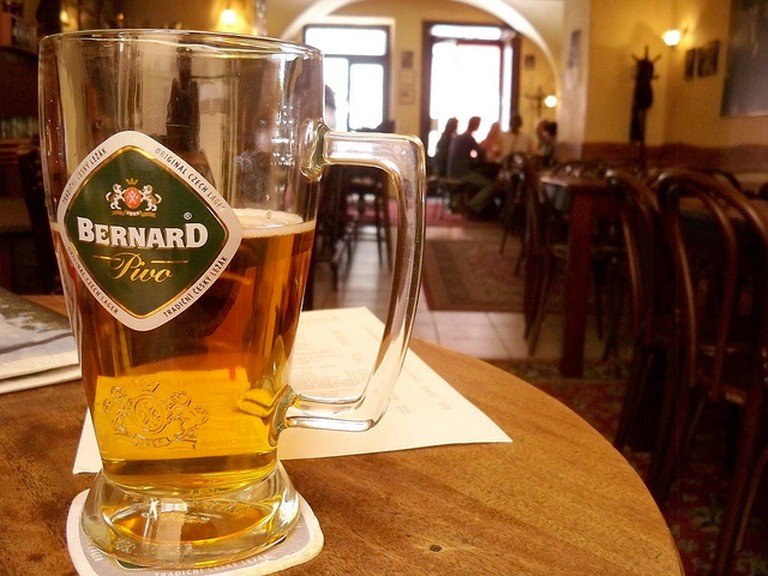 bernard beer, prague cafe | © Megan Eaves
During the Soviet era, Wroclaw was known as the “fortress of Solidarity” and a crucial city in conspiring Polish resistance against communist rule. Konspira takes its guests back to that revolutionary, underground moment in Wroclaw’s history. Tucked away in a secluded, shady spot just off the city’s Main Street, the space is covered in vintage 1980s propoganda posters, news clippings, flyers, and old memorabilia from the solidarity movement, creating the sense that you’ve found a furtive hideaway outside time. Enjoy local and international beer, cider and spirits over hours of heady conversation and sensitive plans, and know that every round you buy will go towards the Association of Fighting Solidarity, a history center attached to the venue which honors the memory of Polish resistance groups.
Open In Google Maps
11 Plac Solny, Stare Miasto Wrocław, Dolnośląskie, 50-061, Poland
+48796326600
Visit Website
Give us feedback

Hotel, $$$
Facebook
Email
Twitter
Pinterest
Copy link
Share
Map View
Mleczarnia is an old-school bohemian cafébar in the Old town, and popular with Wroclaw’s young artists. Just a short walk from the Market Square in the Jewish Quarter, this rustic pub combines dark wood and candelit for an atmospheric evening out enjoying Czech bocks, marcowes and biale beers, as well as a range of mixed drinks and spirits. Whenever you drop in, you’ll find a loyal crowd of locals filling up this beloved bar; so stop by for a coffee in the morning, then come back for a cocktail after dark!
Open In Google Maps
5 Pawła Włodkowica, Stare Miasto Wrocław, Dolnośląskie, 50-072, Poland
+48717882448
Visit Website
Give us feedback 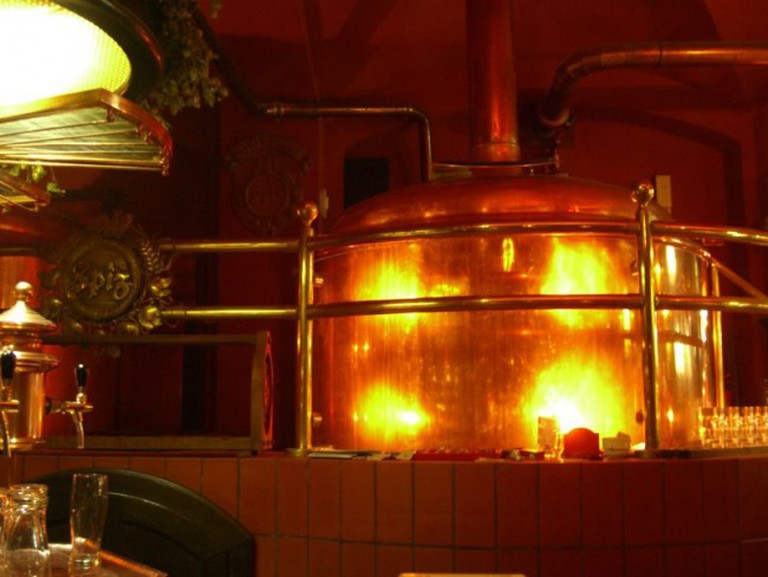 Spiz | © Graham Campbell
If you long to travel back in time and immerse yourself in antiquity, Graciarnia is the bar for you. Beloved by local artists and city’s intellectuals, Graciarnia Pub offers an artistic, intimate atmosphere, permeated by the sounds of piano and jazz (with a special fondness for Louis Armstrong). Keep an eye out on their Facebook page for occasional concert listings. The café serves wonderful warm drinks by day (try the creamy, comforting hot chocolate), while the bar offers a great range of refreshing mixed drinks and eight regular drafts.
Open In Google Maps
39 Kazimierza Wielkiego, Stare Miasto Wrocław, Dolnośląskie, 50-077, Poland
+48717956688
Visit Website
Give us feedback