The Best Bars in Poland That Don't Look Like Bars

Brush Barber Shop, Łódź | © Northern Irishman in Poland
Though Poland thrives with its local shot bar scene, its swanky clubs and even its Irish pubs, there’s still room for a hidden gem or two. These underground bars and secret hangouts can be hard to spot, but they’re worth it when you finally locate them in the most unusual and peculiar settings. Here’s our pick of the best.
Enjoy Poland’s underground bar scene © Northern Irishman in Poland

Hold on, did you just say “barber shop“? Is this not supposed to be a list of bars? It is. And that’s exactly the point. Some local entrepreneur in the city of Łódź came up with a genius idea: when bars are quiet in the daylight hours, the building doesn’t have to go to waste. Similarly, when barber shops and hairdresser shops are quiet at night, people could be drinking in the very same room. And that is the niche that Brush successfully fills. Not only can you get a haircut during the day, but come back at night and it is one of Łódź’s finest cocktail bars. The smoked whiskey cocktail is sublime, sipped in a secret bar zone known as “OFF”, just off Łódź’s main pedestrian street, Ulica Piotrkowska. In the daytime, you’ll see people getting a haircut here, yet could never predict the venue transforms at night. Do be aware that the opening times listed for both the ‘haircut’ and ‘cocktail’ periods and times can be irregular and change. As for the photos of the venue, can you spot the difference?

Imagine walking past a rotten grey concrete eyesore as a tourist en-route from the historic shipyard of Gdańsk towards the charms of the city’s delightful Ulica Długa. “It might as well be knocked down” could be your first impression. Take another look – this is pure Polish magic at play. This huge grey five-storey building was once an air-raid shelter during World War II, and it will shock you once inside. There are five floors, all with different themes, including toilets with naked lady busts, toilets in prison cells, motorbikes, an American style diner, a huge dancefloor and a rock concert stage. The walls on the way in also detail the building’s history. This is not just a Gdańsk institution, but it is one of the city’s most historic buildings, a key sight and often features in the list of best nightclubs in Europe.

Poland’s capital is home to buzzing nightlife, especially on weekends with locals and foreigners who all love to drink and party. It’s clear from the outside that there are many bars that aren’t exactly hidden away. But then enter Weles Bar, Warszawa’s most secret and trendy venue which on first inspection, is easy to overlook. Tucked shyly down a back alley off Nowogrodzka Street near Centrum Metro station there is less than obvious (and easy to miss) black door, which leads you through a barely lit corridor into this fashionable windowless basement bar. Get ready for some great cocktails and idle chat away from the buzzing, obvious haunts that lurk nearby. 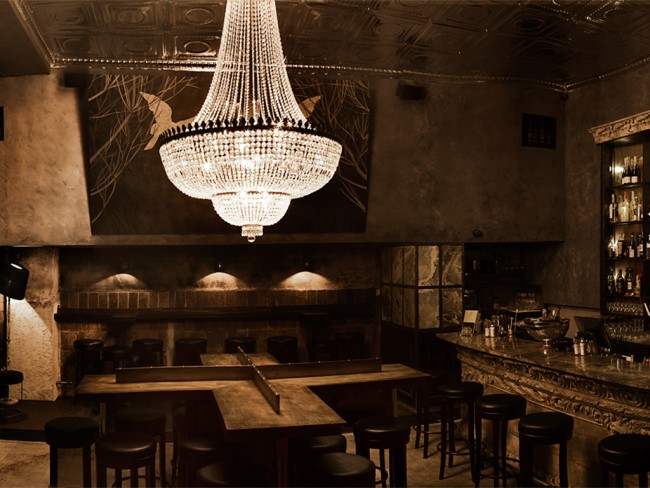 If you mention the words “Zakład Mięsny” to Polish people they will tell you “Oh it’s a butcher shop”, which is exactly what the term means. In theory this Warszawa bar mirrors part of the real meaning of its name, and is housed in what is an old school Polish building in the city’s up and coming Praga neighbourhood. What you get when you enter the corner door of Zakład Mięsny is a surprisingly quirky venue that pumps out contemporary Poland more than most places in the city. The place has an actual butcher’s counter at the rear, to go with 12 beers on tap (always changing), a peculiar seating arrangement where you can eat and drink in any one of a dentist’s chair, a high stool, a builder’s bench or a cosy sofa. The bar also has daily promotions which include Tatar (raw beef with egg and vegetables), vodka promos and pizza. This is more than its title of ‘Butcher’s Shop’ suggests and is yet more proof of the trendy revival in Praga. It feels like another world here. As a bonus, the bar has fast WiFi, friendly staff and of course, no television.

So far all bars on this list have been stationary. Here in Kraków, you can get on the move at the Retro Tram Cafe, which can take you on a tour of the city in a traditional Polish tram. Its interior has been elegantly decorated so you can feel like royalty as you sip good wine and eat tasty Polish food whilst also enjoying the views of one of Poland’s most historic cities out the window. You have to rent the entire tram though – so it’s perfect for parties and big groups who want a really unique experience with only friends or family on board. 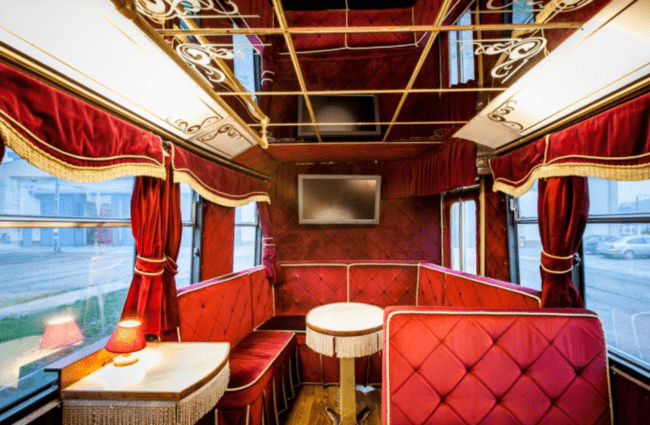 So we’ve had a war shelter, a butcher’s, a hairdresser’s and a tram – now welcome to the Polish cinema. They’re serving beer in a cinema bar? No, rather they’re ‘serving cinema’ in a beer bar. Rock up to the bar, order whatever beer you want, then request a movie and they’ll put in on for you on the big screen. The venue also serves good food and has a decent alcohol and soft drinks menu. At night though it might get crowded, so if you really want a certain film on, you’ll need to get in early. 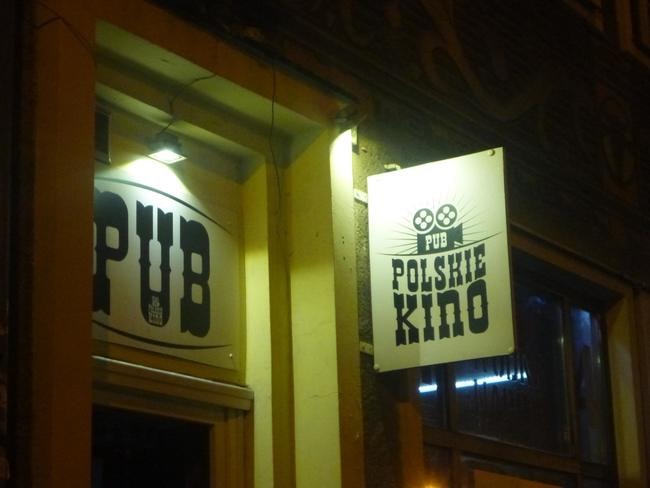 The town of Tczew sits nicely by the famous Wisła River and in the middle of the Kociewie region‘s beautiful countryside. The town itself is famous for a number of reasons – World War II actually started here at the bridge (Most Tczewski) and Napoleon once stayed here. But in among what seems to be residential streets, is a surprisingly cool and trendy bar, completely off the beaten path and housed in a building behind a garden and a collection of shipping container and huge casks. Inside there is good music, live bands on occasion, a great range of beers and the magic of being amongst only locals in a somewhat secretive venue. You wouldn’t even know it was here!