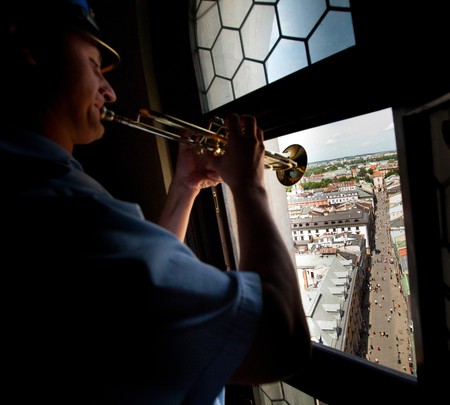 Anyone who’s strolled across the cobbles of Krakow’s Main Market Square at the turn of the hour (both day and night) will have heard the famous bugle call. Called the Hejnał Mariacki in the local lingo, this ditty that echoes out through the Old Town every 60 minutes is actually one of the defining cultural traditions of Poland. Take some time to unravel the curious tale behind Krakow’s Hejnał and you’ll come to understand all the interesting quirks that make this perhaps the most famous little jingle in eastern Europe.

Where the bugle call began

To understand the origins of the iconic bugle call of Krakow, we’ll need to go all the way back to the 13th century. Then, Krakow was one of the most powerful merchant towns in eastern Europe, and the centre of the Polish monarchy. It was grand and rich, and occupied a tactical location on the trade routes across the continent. 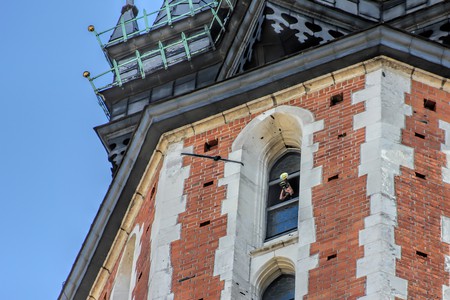 No wonder then that it drew the attention of the invading Mongol Horde, who had been sweeping across the plains of Eurasia since the mighty Genghis Khan first breathed life into his empire in the east. In fact, it was under the command of Subutai, the great general of Genghis’s son Ogedei, that Krakow came under siege in 1241.

The story goes that as the Tartar cavalry approached the city, stealthily creeping through the Slavic forests to the encircling walls, a lone sentry spotted their lines. He swiftly and heroically raised his trumpet and blew the bugle call out from St Mary’s Church tower, across the markets and townhouses of Krakow. The city was alerted and the defences raised. The Mongols were forced to retreat against the closed gates of the Old Town.

Why the bugle call ends

Perhaps the most curious aspect of the Polish Hejnał is the way that it ends so abruptly. It’s no mistake, but rather a remnant of the same story of that heroic sentry atop the towers of St Mary’s. Yep, unfortunately the most accepted version of the tale reveals that in their haste to quell the sentry’s warning to the town, the Mongols shot up a flurry of arrows. One struck Krakow’s hero directly in the neck, and the trumpet call suddenly ceased (and so did the poor fellow!). 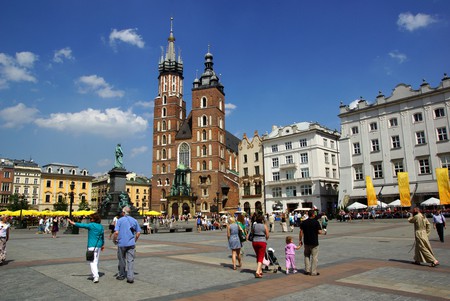 Traditions of the bugle call

Today, the Hejnał call can be heard across Krakow town every hour on the hour. It’s the responsibility of the local fire brigade to keep the tradition going, and despite a few reported mishaps in the early hours (read: sleeping firemen), it’s gone like clockwork for decades.

Crowds of tourists gather below the spires of St Mary’s Church at the turn of the clock to watch as the trumpeters do their thing. They’ll typically play the tune four times – once from every window in the Gothic spire, and out to the four corners of the Krakow Old Town (a homage to the city gates that helped protect against the Mongols all those centuries ago).

The Trumpeter of Krakow

Some people think that the modern tale of the prematurely killed trumpeter is a direct product of the famous 1929 children’s novel, The Trumpeter of Krakow. A romantic and enthralling narrative that’s got everything from mysterious alchemists to Cossack warriors, it’s true that the work is the first known written record of the legend.

However, whether the product of later literature or a city’s long held homage to a brave trumpeter that once saved its skin, the Hejnał Mariacki remains one of the most iconic features of Krakow life. Just be sure to make it to the Main Square on the dot of the hour!