The 10 Most Instagrammable Spots in Warsaw 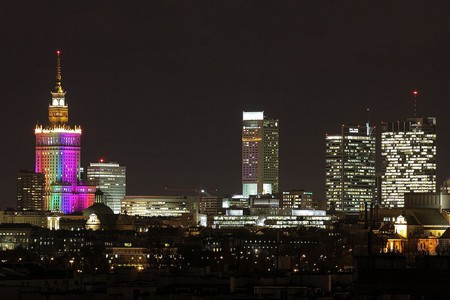 Warsaw © Ministry of Foreign Affairs of the Republic of Poland / Flickr

From the city’s most visible landmark, the Palace of Science and Culture, to riverside neon and a tropical-themed pâtisserie, we’ve rounded up ten most Instagrammable places in Warsaw.

Palace of Science and Culture

No visit to Warsaw is complete without Instagramming a picture of the iconic Palace of Science and Culture. Built in 1955 as a gift from Stalin, it remains the socialist symbol of Warsaw (some Poles still have negative feelings towards it) and the city’s tallest building. Today, it houses theatres, cinemas, museums, offices and an observation deck on the 30th floor offering splendid views of the city. It’s often illuminated in different colours to show support for various political and cultural events.

Warsaw’s historic indoor market, Hala Koszyki, has reopened following an extensive redesign. Eighteen restaurants, over ten stores, a culinary workshop space, a yoga studio and an art gallery occupy the 172,000-sq.-ft. space. Since its opening in October 2016, Koszyki has rapidly become one of Warsaw’s top culinary addresses among both locals and tourists. To fully capture the glory of the space, head to the first floor terrace, from where you can admire the wrought iron roof structure and vast red brick interior.

The Miło Cię Widzieć (Nice To See You) typographic neon was installed on the Gdański Bridge on the bank of the Vistula River in 2014 by the Warsaw Neon Museum and energy company Innogy. It’s illuminated 24/7, but check it out at night for the best visual effects.

Odette Tea Room is one of Warsaw’s most photogenic venues. Visual highlights include the beautiful pastry creations and the lush green tropical patterned walls, which will get you kudos from all your design lovers and foodie followers.

The University of Warsaw Library Gardens

The over one-hectare gardens on the roof of the University of Warsaw Library are another great opportunity to add a bit of greenery to your Instagram feed. The gardens feature a rich variety of plants, water fountains and offer breathtaking views of the Warsaw skyline and the Vistula River.

Don’t miss Warsaw’s spectacular street murals during your stay. Referencing everything from history and politics to current affairs and Polish cultural heritage, they adorn the walls of numerous buildings in different neighbourhoods, including the central Śródmieście district and the up-and-coming Praga area.

Peacocks at the Łazienki Park

While taking a stroll in Warsaw’s most beautiful park Łazienki, you are very likely to spot red squirrels and vibrantly coloured proud peacocks. If you’re lucky, they will let you get quite close to photograph them.

The next one will be a deer 😂😂 #lazienki #warszawa #warsaw 🇵🇱

Soho Factory is the city’s main creative hub. It’s home to media and design businesses, the cult Warszawa Wschodnia restaurant (which serves Polish food and is open 24/7) and the Neon Museum. The complex occupies post-industrial brick buildings and features some new residential developments.