Szarlotka: A Brief History and Recipe for Polish Apple Pie 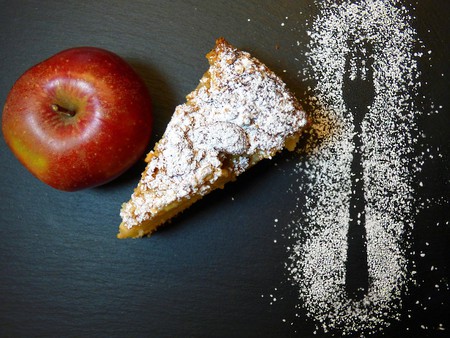 The weather is getting colder, the Great British Bake Off is back and apple season is in full swing. What better time to bake some Polish apple pie, or szarlotka (pronounced shar-lot-ka), and find out a little about its history too? Also known as jabłecznik, szarlotka is one of the most popular (and tastiest) Polish desserts. Read on to learn about its origins and make it yourself with a Polish babcia(grandmother-)approved recipe.

The origins of the humble apple pie go all the way back to the Middle Ages. In 1381, the first recorded recipe was written in England, and it called for an abundance of fruit including figs, raisins, pears and even saffron, as well as apples, encased in a ‘cofyn’ of pastry. Unlike the confection we know and love today, it didn’t contain sugar, which was a very rare and expensive commodity in Medieval Europe.

In Poland, apples have been grown since the seventh century when they were introduced by Cistercian monks, and since then they have become a core component of its cuisine. Today, Poland is one of the largest exporters of apples in the world.

There’s a wonderful rhyme by children’s poetry Jan Brzechwa (1898 – 1966) which illustrates perfectly just what a staple apples are. Entitled Entliczek-Pentliczek, it tells the story of a little worm living inside an apple who’s entirely fed up with eating the fruit. All he dreams about is steak, so he sets off into town, traversing for a week to find a place to eat. But when he finally arrives at his destination, and the waiter hands him a menu, the poor worm discovers that all that’s on it are apple-based foods like szarlotka, stewed apples, baked apples and apple soup! 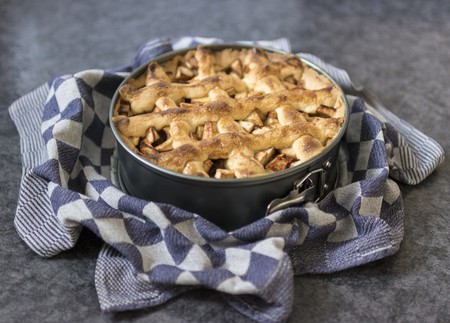 Polish Szarlotka originates from a dessert created by the famous French chef, Marie-Antoine Carême (1784 – 1833) in Paris in the eighteenth century. There are a number of stories surrounding the origins of the name of this confection, but the charlotte, or charlotte russe, is said to have been produced by the chef in honour of either Queen Charlotte, the wife of King George III of England, or the wife of Tsar Alexander I of Russia. It consisted of stale bread or ladyfingers used as a lining to encase a dense filling of fruit. In nineteenth-century Poland, Lucyna Ćwierczakiewiczowa (1829 – 1901) published a recipe using stale rye bread as a base for the pie in her extremely popular cookery books.

In present-day Poland, there are many variations of szarlotka. It usually takes the form of a layer of buttery sweetcrust pastry, filled with sweet stewed apples (often spiced with cinnamon or cloves), and topped with another layer of pastry, crumble, or sometimes meringue. Sounds delicious, doesn’t it? And while arguments rage over the correct topping and method, whether it ought to be served warm or cold, filled with a generous or sparse layer of apples, most Poles will tell you that no one makes szarlotka quite like their babcia.

To make the filling, peel, core and chop the apples into roughly 1 cm sized chunks. Place in a large saucepan, add a few tablespoons of water and sprinkle over the sugar and cinnamon. Cook on medium heat for 5 – 10 minutes, until the apples are soft. Taste for sweetness and add more sugar if required. Take off the heat and set aside to cool.

Prepare the pastry. In a large bowl, sift together the flour, sugar, baking powder and salt. Chop the butter into small chunks and rub with the flour mixture using your hands, until it has the consistency of breadcrumbs.

In a small bowl, whisk together the egg yolks, sour cream and vanilla extract. Pour into the breadcrumb mixture and bring everything together with your hands. Wrap in cling film and leave to rest in the fridge for about half an hour.

Split the dough into balls. Roll out until they’re about the size of your dish and press one into the bottom. Spoon the filling on top in an even layer. Cover the filling with the remaining pastry and make a few holes in the top with a fork.

Brush the top of the pie with the reserved egg whites. Bake for around 45 minutes until golden brown. Allow to cool for at least 10 minutes before serving.