Best PRL Pubs in Poland | © Northern Irishman in Poland
When you think of the acronym PRL you are warped back in time to an era when there was no Polish Republic like the one that exists today. Until the fall of communism, Poland was known as Polska Rzeczpospolita Ludowa (PRL), in English “The Polish People’s Republic” from 1952–1989. When the Berlin Wall came down, the Soviet Union broke up, communism faded away in this country and there was a new sense of freedom and it became the Republic of Poland (“Rzeczpospolita Polska”). In recent years, some excellent bars that give reminders of those days now dominate towns and cities throughout Poland and are hugely popular and insightful.

No to CYK, Gdańsk

Bar, Polish
No to CYK, Gdańsk | © Northern Irishman in Poland

No to CYK is a cosy and cheap bar on Chlebnicka just at the end of the famous Ulica Piwna (Beer Street) in Gdańsk. With their 4złotych and up menu and traditional 1980s style Polish beer bottles, this is a cheap and cheerful place full or classic PRL nik-naks on the walls. The upper floor has glass cases containing old banknotes and stamps and there is a man with a gas mask at the front window. The menu also boasts cheap and fast Polish food such as Tatar (raw beef and egg) and śledź (herring) from 8 złotych. 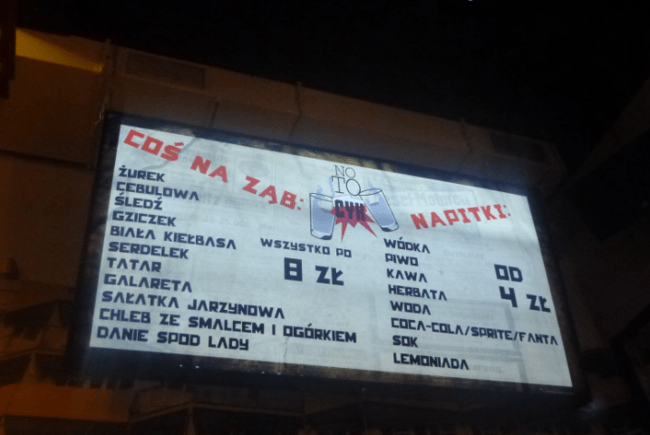 You’ll get the idea when reading this that most of these PRL style pubs are very cheap places to hang out it – it’s part of their niche. Bydgoszcz is one of the least commercial cities in Poland and often neglected by tourists unaware of the pure beauty and charm here. It’s a stunning city with canals, often dubbed the “Venice of Poland”. What’s also impressive is that the towns’ bars, cafes and pubs are in general cheaper than rival tourist cities such as Poznań, Gdańsk and Kraków. Pub PRL is an excellent PRL style pub in the city’s main square. Inside there are cheap drinks and gramophones, televisions and all sorts of memorabilia from communist times adorning the bar’s walls and shelves.

Proletaryat in Poznań is one of the busiest PRL style pubs in Poland and is a great find for anyone who comes across it. It’s actually located just two minutes walk from Poznań’s gorgeous Old Town Square, included in Poland’s prettiest squares. At the front, you will see the bust of Lenin. Once you get inside, you might be surprised by the pub’s huge beer garden which goes back a long way. The bar is adorned with communist flags, banknotes and random items. The wall features pictures of Lenin and other prominent leaders from those days.

Klub PRL in Wrocław occupies a prominent location in the heart of Wrocław, in the Old Town Square. This is a truly special bar and should not be left off your itinerary when visiting Poland’s “city of gnomes”. This is a more mid-priced option but then again when you are sipping a cold beer and some good pierogi in one of the most beautiful squares in Europe, there is no reason to complain! Even better news comes with the knowledge that this bar is open 24 hours a day, non-stop, closing only for important Polish holidays!

Szczecin sits just four kilometres from Germany, offering many tourists coming overland their first taste of Polish culture. The city has been redeveloped in recent years with new shopping malls and stylish new cafes and bars all part of the city’s modernisation. Propaganda is the city’s old-fashioned bar and indeed appears on the list of best bars in Szczecin. This is a serious contender for “cheapest bar in Poland” given that they still advertise a 2złotych beer (your second beer) before 4 pm on weekdays, that’s 50 US cents!

The “Red Pig/Hog” is the exception to the rule on this list, as the menu is expensive and doesn’t quite fit the cheapness and point of a PRL pub. The menu does offer two options though – the cheaper one is “for the proletariat” and the dearer option “for dignataries and the bourgeoisie”. That said, it is a very famous bar and restaurant which has been visited by countless celebrities and it is one of the rare PRL pubs in Warsaw, the country’s capital city. If you check the endless array of photos on the walls, you will see which famous people visited this place. The food menu is vast, quirky and excellent. The interior is red with lots of memories of a bygone era. The beer garden out the front permits smoking and has a vintage Polish car from the 1980s, a Black Volga, notorious for being the car associated with the KGB and abductions during communism.

Ministerstwo Śledzia i Wódki translates as the Ministry of Herring and Vodka and is a chain of bars in Poland all owing their interior design to PRL days. Newspapers on the walls, cheap beer and consistent layouts make Ministerstwo a very easy place to hang out for a few drinks or snacks. Prices are amongst the cheapest in most Polish cities. Opole’s main square doesn’t attract as many tourists as it merits, but those who do venture here are delightfully surprised. Ministerstwo occupies a prime spot just two minutes walk from the main square and city hall. Once inside, be sure to try the trademark herring and vodka combination!

Sopot is a swanky and stylish seaside town so you could be forgiven for thinking that cheap PRL bars escape this place. That’s probably because you headed straight from the train station down Sopot’s main drag, Ulica Bohaterów Monte Cassino towards the town’s busy pier and beach. Instead, if you head away from the packed streets and promenades, you will find this little gem of a bar. Tucked away shyly, offering a great range of beers in bottles, board games and of course a theme from PRL era as if you were still in the 1980s, bear in mind you are still in Sopot though, so prices are mid-range again.

One of the most artistic and quirky bars on this list, and one that doesn’t even seem obvious as you walk past it on Gdańsk’s famous Ulica Piwna (Beer Street). That’s because you are not sure what awaits you as you walk up the steps past the balcony and enter the world of Jozef K, Gdańsk. From the outside it looks as regular as any other bar on the street. Once inside, you will be surprised. Bookcases on the ceiling, pictures adorning the walls, quiet rooms and corners to lounge in and of course plenty of reminders of Poland’s communist times. A special bar popular with Instagrammers.

Downtown Kraków doesn’t have many PRL style pubs as the city focuses on more touristic restaurants and bars and international cuisines, but look beyond that and into Kazimierz, the city’s Jewish district and you will uncover Propaganda. Despite sharing the same name as the Szczecin pub, this is also an independent bar owing its decor and design to days gone by. The bar has great live music to be enjoyed while surrounded by hundreds of mementos and tokens from the times when Poland was part of the socialist block. There is a really special atmosphere not experienced in the city’s more touristic parts.