How to Spend 48 Hours in Warsaw 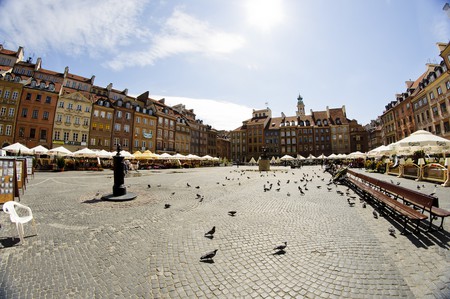 Warsaw is a perfect destination for a European weekend city break. From historical landmarks and inspiring museums to traditional Polish restaurants and trendy cafés, we select the must-do’s during your 48-hour stay in Poland’s capital.

Start off your day with a heartwarming breakfast at Weranda Bistro located in the recently opened Hala Koszyki – a 172,000-sq.-ft. food and shopping complex in the central Śródmieście district. Go for tomato scrambled eggs, an egg, avocado and coriander croissant, or a classic shakshuka, and finish it off with a refreshing raspberry and espresso smoothie.

Stroll down the beautiful Krakowskie Przedmieście Street (part of the Royal Route, which connects the Royal Castle with the former royal residence of Wilanow in the south of the city), towards the historical Old Town. On the way, you can admire some of Warsaw’s most important architectural landmarks – such as the neoclassical Presidential Palace and the University of Warsaw main campus right next to it, which you can enter through an ornate Neo-Baroque gate.

Further down, you’ll see Warsaw’s most prestigious Hotel Bristol (it’s over 115 years old), which has been host to many famous guests including Pablo Picasso, Marlene Dietrich, and Martin Scorsese, and St. Anne’s Church; it survived the Second World War almost intact and features one of the best viewing platforms in the city offering splendid views over the Royal Castle Square and the 17th-century Sigismund Column (commemorating Polish king Sigismund III Vasa who in 1596 moved Poland’s capital from Kraków to Warsaw). From here, walk around the charming cobbled streets of the historical Old Town, where you can also have lunch.

Visit the POLIN Museum of the History of Polish Jews

A dose of history for the afternoon – head to the POLIN Museum to learn about the culture and heritage of Polish Jews from the 10th century until the present. Eight immersive galleries (including The Jewish Town 1648-1772, Encounters with Modernity 1772-1914, and Holocaust 1939-1944) feature interactive displays you can play with to find out more about each topic, plus a reconstruction of a historical synagogue, and an interactive model of Kraków and its Jewish Kazimierz quarter in the middle ages.

Not too far from the POLIN Museum is a great Polish restaurant called U Kucharzy, which serves traditional dishes such as pierogi, steak tartare, barszcz, kotlet schabowy, and more. Here, you will also be able to watch skilled chefs prepare meals on moveable tables in front of your eyes. Don’t forget to finish your dinner off with a shot of Polish vodka. Polish restaurants Różana and Stary Dom (both located in the Mokotów district) are great alternatives to sample Polish cuisine if U Kucharzy is fully booked.

After dinner, head to Plac Zbawiciela – the capital’s iconic hipster hangout. Enjoy a glass of French wine or champagne at the popular Charlotte café/bar or grab a pint at the cult Plan B, which is a more alternative pub next door. Both places get very crowded on weekends. In the summer, you can also sit outside.

After having brunch at one of Warsaw’s cafés such as Być Może, make your way to the Warsaw’s most beautiful park Łazienki located just a stone’s throw away. Home to red squirrels, colorful peacocks, and a number of magnificent Baroque palaces, it’s a definite must-see regardless of the season. During the summer, head to the Chopin’s Statue where live piano concerts take place every Sunday, and when it’s cold, visit the nearby Centre for the Contemporary Arts, located in the Ujazdowski Castle, where you can also have lunch at Qchnia Artystyczna or Instalacje Art Bistro.

Have a Coffee Break

Choose one of Warsaw’s cosy cafés, such as Ministerstwo Kawy, Café Stor, or Café Próżna, to relax and unwind with a cup of delicious coffee.

Cross the Vistula River to visit the Neon Museum – home to over 60 colorful neons from the Cold War era – and walk around the artsy Praga neighborhood to get to know the more alternative side of Warsaw.

End Your Day With A View

End your day in the very center of Warsaw – on the 30th floor of the city’s communist landmark, The Palace of Science and Culture. From here you can see the city in all its glory – from rocketing skyscrapers and church towers, to the National Stadium and the Vistula River.