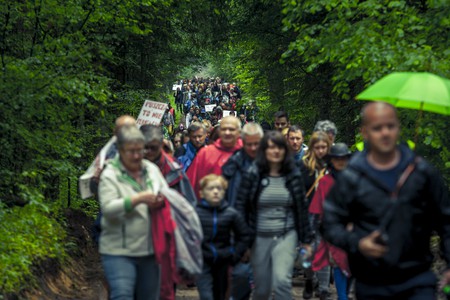 Almost eight hundred protesters marched last weekend in Białowieża National Park, Europe’s last primeval forest, to voice their disagreement with the government’s logging scheme which will cut down nearly 10,000 acres of trees, a threefold increase from what was previously agreed. Activists claim that the authorities favour the timber industry over the preservation of the ecosystem, while the state officials justify their actions as an attempt to fight against a devastating bark beetle infestation.

Why is Białowieża forest important?

Spanning across Poland’s eastern border with Belarus, Białowieża forest occupies over 3,000 square kilometres, part of which has not been altered by human intervention for thousands of years. This last bastion of European ancient ecosystem is home to 1,070 species of plants, 4,000 species of fungi and 58 species of mammals, including wolves, lynx and Europe’s largest bison population.

For centuries Białowieża was a royal hunting reserve for the Polish kings and then the Russian tsars which ensured that the forest remained untouched by the local communities. The site gained the rank of nature reserve in 1921 and in 1979 it became a UNESCO World Heritage site.

What does the Minister of Environment say?

The government’s logging scheme does not include Białowieża National Park which is tightly protected. However, the National Park only encompasses 17% of the forest on the Polish side, which means that remaining 40,000 hectares could potentially fall victim to state-sanctioned logging.

The government officials, including the Minister of Environment Jan Szyszko say the bark beetle infestation, which has already destroyed over half million trees, is the main reason for the increase of state-authorised logging. Foresters believe that by cutting down some of the trees, they will be able to save the rest. 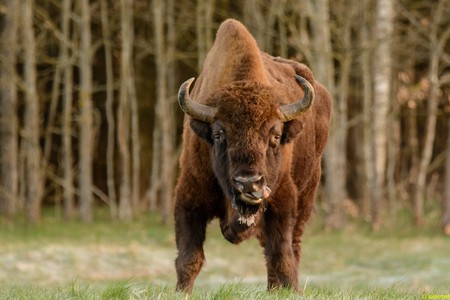 Why are the experts against deforestation?

This decision infuriated the European Commission, the Polish chapter of Greenpeace as well as other local organisations dealing with wildlife preservation. They claim that interference on such a scale is not only unnecessary, but even dangerous for the entire ecosystem and will not help to control the beetles. Environmentalists point out that beetle outbreaks are a natural and necessary process that occurs in periods of eight to ten years and that cutting down of trees could have the opposite effect from what is intended.

“Minister Szyszko and some of the foresters are explaining the ongoing logging as security measures and the desire to stop the beetles attacking the spruce. Meanwhile, Greenpeace and Dzika Polska Foundation have been showing for more than a year that the logging has nothing to do with the safety of tourists, and the cut-down trees are often unaffected by the beetles,” said Katarzyna Jagiełło from Greenpeace Poland. She also insisted that in accordance with UNESCO regulations, dead spruces should remain in the primeval forest as an integral part of it.

Greenpeace’s reports suggest that the commercial interests are the main reason behind the logging scheme. However, the State Forests Service, the governing body of the forest, manages over 7.6 million hectares of woodland all across Poland, which means that the part of Białowieża forest where logging is allowed, constitutes only around 0.5% of its jurisdiction.

The European Commission issued a warning to the Polish government on April 27, giving the officials 30 days to halt the logging or face repercussion from the European Court of Justice, however the Polish officials have not shown any signs of backing down. 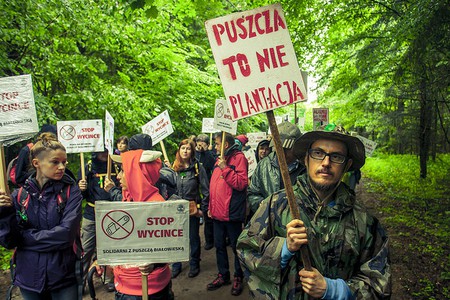 What actions have the activists taken?

In response, activists decided to take the matter in their own hands. Earlier this year Greenpeace Poland emptied a van full of sawdust in front of the entrance to Parliament, while unnamed protesters cut down all the trees at Minister Szyszko’s holiday home, in efforts to show their disagreement with a streak of anti-environmentalist policies passed by the ruling party, Prawo i Sprawiedliwość.

Last week, dozens of Greenpeace activists and volunteers chained themselves to the logging equipment for the fourth time this year. Two attempts – on May 24 and 30 – ended after the official authorities confirmed the withdrawal of the equipment from the forest, while the third one was terminated by the police intervention.

This week Greenpeace Poland together with local environmental NGOs organise lectures, concerts and happenings to raise awareness about the situation in Białowieża among general public in Warsaw, with a large protest under the Ministry of Environment planned for Saturday, June 24.