8 Polish Soups You Have to Try 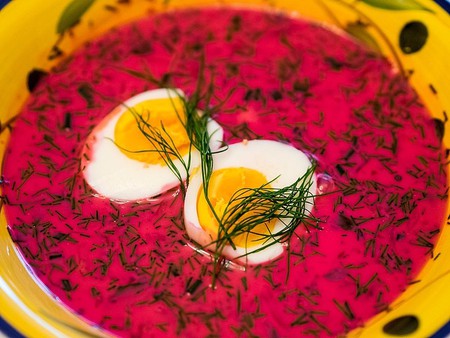 A big part of Poland’s gastronomic culture is the range of soups that are available. The country is blessed with a hearty mix of soup varieties, from the hot meaty winter options to the cold summer soups, and the best thing is that these soups are all freshly made with locally harvested vegetables and the finest Polish meats. This list contains eight of the best soups every Polish grandmother in history should know how to prepare. As the Polish say, Smacznego!

Rosoł is a Polish variation on chicken noodle soup. Thin vegetable noodles are added to a hot mix of pre-boiled chicken thigh meat, carrots, parsley and onion to provide one of the most commonly consumed Polish soups. Herbs, spices and salt are added to this popular national lunch dish, which is widely available in Bar Mlecznys (Milk Bars) and local Polish restaurants. 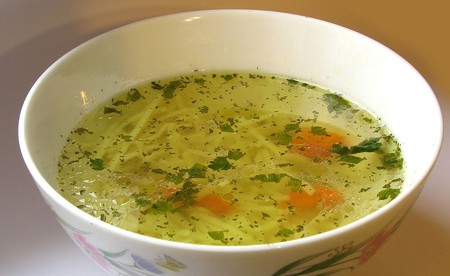 Poland serves up some truly exceptional cold soups, and Chłodnik is a healthy gem. It’s a beetroot soup with egg and dill inside and is always served cold. Normally the egg has been boiled, halved and floats on the top of the soup. Chłodnik is very distinctive due to its rich pink colour. The soup is a common starter all over the country and is highly popular in the summer months in Baltic seaside towns. Bread on the side is optional.

Flaki is a popular Polish soup made out of strips of beef tripe/stomach that are seasoned with marjoram and bay leaves. It has been part of Polish culinary recipes since the 14th century and was rumoured to have been King Władysław II Jagiełło’s favourite dish. Like most Polish soups, vegetables are added. In this case, it is normally carrots, celery, onion and parsley. 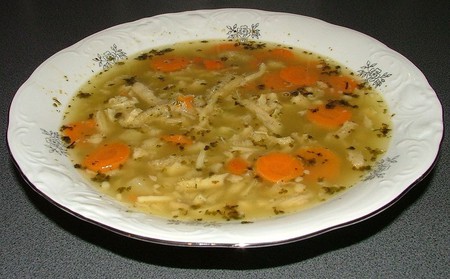 Żurek is yet another example of a fine yet intense Polish soup. Żurek in general is a Slavic soup that can be found not just in Poland, but in other Eastern European countries. However, the Polish version is made from rye, kiełbasa (Polish sausage) and ham and is a tough soup to replicate. Many Polish restaurants serve Żurek inside a large crusty bread roll, which makes it a huge meal. After finishing the soup, you’ll be expected to eat the rest of the bread.

Barszcz czerwony (red beetroot soup) is the Polish take on a popular soup of Eastern Europe and the former Soviet countries. The Polish version includes mini pierogi inside and is not as thick as similar variants in Ukraine or Belarus. Polish people love a strong bowl of Barszcz czerwony on a cold winter day, complete with a dollop of smietana (sour cream) on top and their favourite bread on the side. When it is consumed at weddings and evening events, expect locals to sip it alongside a shot or two of Polish vodka. 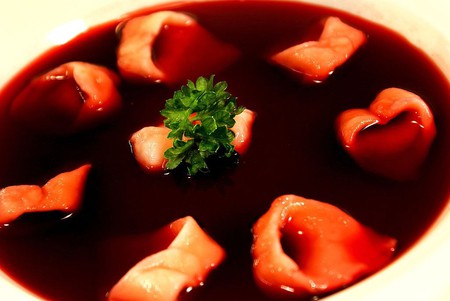 The Polish love their gherkins, and it comes as no surprise that they have a few soups featuring this healthy vegetable. Literally translated as ‘gherkin or cucumber soup’, this bubbling green broth tastes much nicer than its basic recipe would suggest. It’s not just water and gherkins. It has a strong, salty and distinct flavour coming from the main ingredient – Polish pickled gherkins. The soup’s exact recipe can vary from region to region, but it is often fused with a medley of potatoes, dill, boiled eggs and chopped carrot, which all seem to complement the main ingredient to perfection.

Poland’s north coast offers a sensational range of more unusual soups, often with fish as one of the core ingredients, thanks to the fresh waters of the Baltic Sea. To enjoy some great seafood soups, head to the riverside in Gdańsk, Gdynia or Sopot. One of the oldest and most quaint little restaurants in Gdańsk, Kubicki serves up a special spinach and crayfish nettle soup. Known in Polish as Zupa z pokrzywy oraz szpinaku z kremem serowym i szyjkami rakowymi, this dish is a Polish fish soup. Gulp it down with some bread with butter or smalec (pig fat) on top.

No list of top notch Polish soups could be complete without including some kind of mushroom soup. Forests of Poland are famous for their wild mushrooms, and this soup makes an appearance mostly in autumn time and also for the Christmas Eve feast. As well as fresh Polish mushrooms, onion, dill and herbs are added. Like many Polish soups, a heaped spoonful of sour cream (smietana) is placed on top to complete this fine recipe. 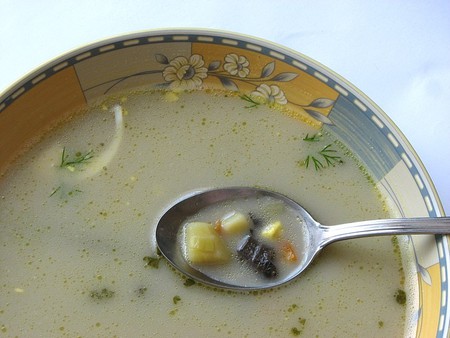