7 Unusual Things to Do in Starogard Gdański

7 Unusual Things to Do in Starogard Gdański

Starogard Gdański "perfect square" | © Jonny Blair/ Northern Irishman in Poland
Starogard Gdański is a hidden gem of a town in Poland’s Pomerania Province. A tranquil and pretty town, you will be surprised to discover what the place offers. Here are seven unusual activities to keep you occupied on your visit to Starogard Gdański.

Relax on the town’s inland “beach”

Despite the fact that Starogard Gdański is about 50 kilometres from the coast, quirky residents of the town decided to bring the beach to the old town square! While the “beach” is only in town in the summer months, it’s a great place to build sandcastles, get a tan, eat ice cream and drink a beer while sitting in the town centre. At night there is sometimes music on the stage facing the beach by the City Hall.

Sleep on an island at the Hotel Noclegi Rekord

Hotel
Hotel Noclegi Rekord | © Jonny Blair / Northern Irishman in Poland
It’s not obvious that there is an island in Starogard Gdański, but once you cross the northern bridge away from the main town square (Stary Rynek), you will find yourself on an island that houses a football stadium, a palace and a hotel. What better way to relax on an evening than watching the sunset from an island within a beautiful town. As a bonus, the hotel also has a small museum dedicated to Kazimierz Deyna, a Polish Olympic Gold Medalist and footballer who helped his country finished third in the 1974 World Cup. The Hotel has traditional yet basic rooms, offering reminders of communist times.
More Info
Open In Google Maps
1 Olimpijczyków Starogardzkich, Starogard Gdański, 83-250, Poland
Visit website

Tour a Vodka distillery once part-owned by Bruce Willis

Starogard Gdański is home to the huge Sobieski vodka distillery, a brand once part-owned by Bruce Willis. Sobieski is a popular and famous Polish brand of vodka named after John III Sobieski, a 17th Century Polish king and military leader. Sobieski Vodka is famous for a few reasons other than the Bruce Willis connection though, it comes in different flavours, including peach, mandarin, vanilla, and melon. It has won national and international awards for its vodka. In the autumn of 2007, Sobieski was ranked as #1 vodka by the Beverage Tasting Institute, based on a blind tasting of 108 different vodkas. In 2012, Sobieski was the sixteenth most popular vodka in the world, by sales. Tours can be organised through the Sobieski website.

Become a medieval archer at Owidz

On the edge of Starogard Gdański, the village of Owidz has a living museum featuring a reconstructed medieval settlement, once inhabited by the first Polans (in the early 11th Century). This place is known as Grodzisko Owidz and allows visitors to really feel the atmosphere of the medieval times. One of the most popular attractions is giving you the chance to become a medieval archer. The centre holds archaeological festivals, archery competitions, and courses in pottery making. All this happens among wooden cottages and the medieval workshops of ancient craftsmen in a rustic setting.

It may seem sad that the Pałac Wiechertów has been left to the joys of nature despite being so close to Starogard’s town centre. It has been abandoned for years but tours can still be arranged. The palace was built in 1882 at the request of an affluent local merchant family, the Wiecherts. The building comprises two parts. The first part is made of red brick and intrigues visitors with its gateway, reflective of ancient triumphal arches. The other part, on the main street features five statues at the front and has rich ornamentation in Renaissance-Revival style. The palace is surrounded by a huge park.

The most popular brewery in the region, Browar Kociewski has its own bar and restaurant and here you can sip local beer while inside the actual brewery. There is also a hotel and spa on the complex called Hotel Ren. As well as some excellent beers and tasty local food. The intriguing “beer soup”, known locally as zupa piwna is worth a try and a quirky and unusual feast. Beer soup is available in winter months as well as the popular hot beer (grzane piwo) and the brewery organises a highly popular annual Beer Festival.

Back in the 1970s, Poland reached third place in the 1974 World Cup and won the 1972 Olympic Gold in football. The catalyst and superstar local hero of the Polish football team was Kazimierz Deyna, who hailed from Starogard Gdański. Sadly, Kazimierz died in 1989 in a car accident. However, he is fondly remembered in his hometown, where there is not only a touristic “Deyna trail”, but in the local football stadium (aptly named Stadion Miejski im. Kazimierza Deyny) there is a statue of Deyna in the stands, using up a seat. So if you’re lucky enough to have the seat next to him, you can watch the match beside this local hero! If not, go on a non match day and you can get photographed beside him. Look carefully and you will see the statue of Kazimierz in the photo below. 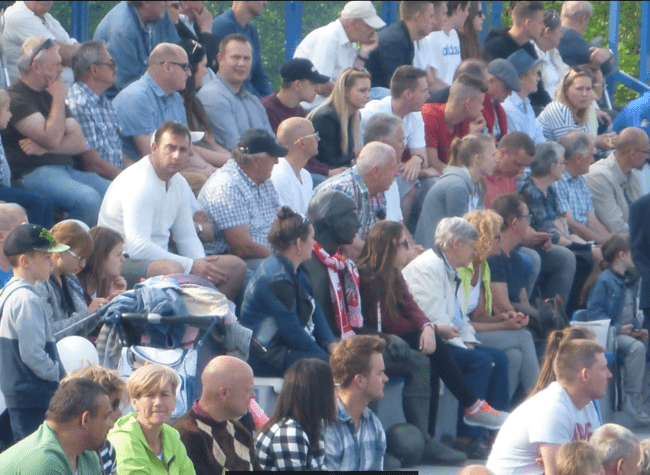