7 Mouthwatering Potato Dishes That Will Remind Poles of Home 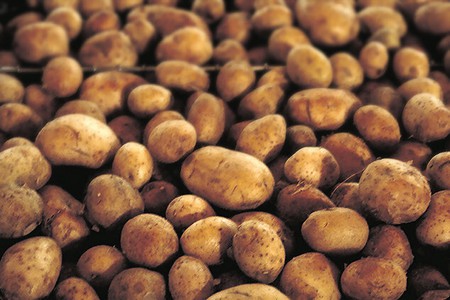 If the only ways of eating potatoes you can think of are fried, baked or boiled, then you clearly have no experience of Poland‘s cuisine. Though potatoes originate from South America, Poles readily adopted them in the 17th century and made them their national treasure. Here are seven Polish dishes that put this humble vegetable on a pedestal.

To make the perfect batch of delicious potato pancakes, grate raw potatoes and onions, and mix them with eggs and a little bit of flour before frying golden-brown. Potato pancakes are typically served with sour cream, beef goulash or mushroom sauce, though some like them sweet with sugar or apple sauce. Unlike hash browns, popular in the Anglo-Saxon world, Polish potato pancakes are not considered a breakfast food, but make for a comfortingly heavy lunch or dinner option. 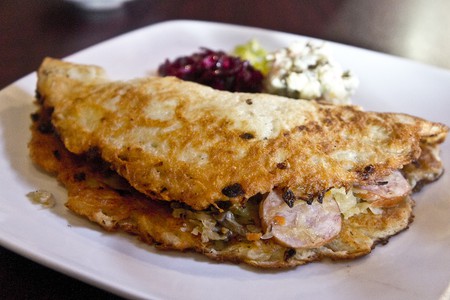 Even though they may resemble potato pancakes, kotlety ziemniaczane are made from cooked potatoes which means that they are softer on the inside and easier to digest. They’re a great option if you have some leftover potatoes, and are typically served with a simple tomato sauce. A great way to turn up the flavour is to add fresh herbs to the mix.

Traditional to the Silesia region in the southwestern Poland, kluski śląskie are also known as Silesian dumplings, and are another great way to use up leftovers form the day before. Made from one part potato flour and three parts mashed potatoes, with some recipes calling for an egg, kluski śląskie have a distinct round, flatten shape with a slight depression in the center, made with a thumb. To cook Silesian dumplings simply put them in boiling salty water and wait until they float to the top. Traditional dinners in the region typically consist of dumplings, beef rouladen with gravy and a side of seasonal vegetables. 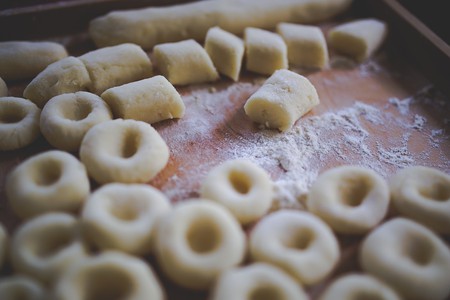 Prepared with part cooked and part raw grated potatoes, pyzy are often stuffed with meat, mushrooms or twaróg, a type of Polish white cheese. They are served with bacon pieces or butter and depending on the region, they can be either round or oval.

With a round shape, knedle may resemble pyzy, but that’s the only similarity. Made with cooked potatoes and quite a bit of flour, knedle are typically stuffed with fruit, especially plums, and are served as a sweet dish. They are boiled in water until they float to the top, and served topped with sweet cream or breadcrumbs fried in butter and sugar.

Kopytka are another type of potato-based noodles. Unlike kluski śląskie which use potato flour, to make kopytka you need wheat flour. Once the dough is ready, form it into thin rolls and cut off small pieces with a knife. Simply boil them until they float to the top, then serve with mushroom sauce, goulash or any other gravy-heavy dish. 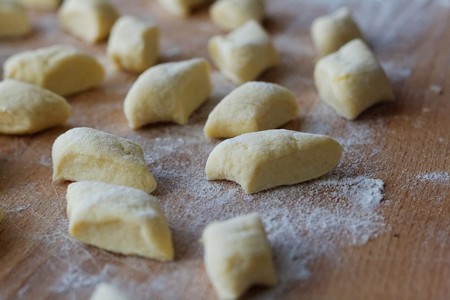 Last but definitely not least, the stellar Polish dish: pierogi ruskie. Often wrongly translated as ‘Russian-style dumplings’, their Polish name refers to the historic region of Red Rus (Ruś Czerwona), located in modern-day south-west Poland and western Ukraine, and not Russia. The filling is made from part cooked potatoes and part twaróg (white Polish cheese), seasoned with salt, pepper and fried onions. They are served fried or boiled, with a side of sour cream, topped with bacon pieces and butter.