10 Places That All History Fans Must Visit In Warsaw

From a splendid 17th century capital to virtual annihilation during World War II, Warsaw has a rich but often tragic history. Stunning royal palaces stand in stark contrast to socialist blocks of flats and monuments to the thousands who fell during 20th century battles, creating a modern day city that is virtually unrivaled in the stories it tells about the past. 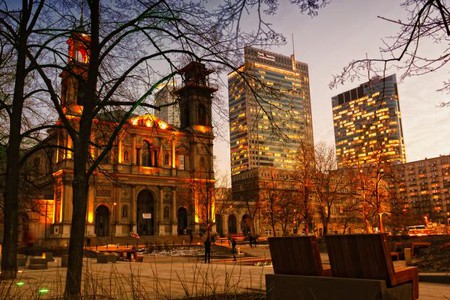 Pałac Kultury i Nauki (Palace of Culture and Science) 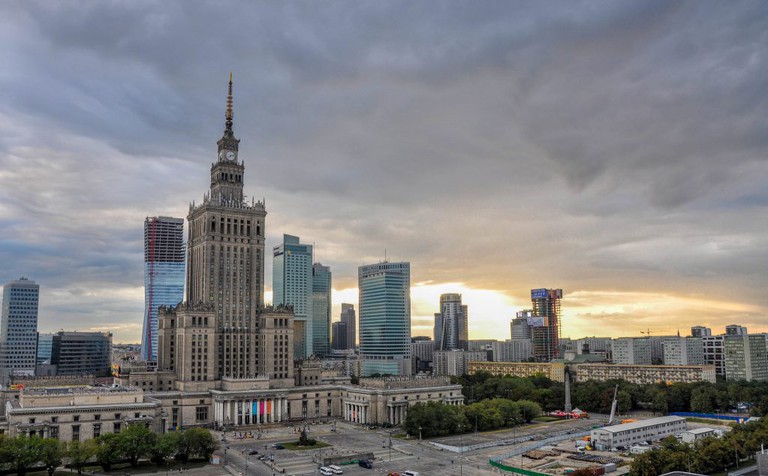 Palace of Science and Culture I | © Jorge Láscar/Flickr
No building in Warsaw produces such divided opinions as the Palace of Culture and Science, but few also reveal so much about the city’s history. Given as a ‘gift’ to the Polish capital by Stalin, the Palace was intended to be a building ‘for the people,’ but was despised by many Poles as the most ostentatious symbol of Russian hegemony. As the tallest building in Warsaw, it dominated the city’s skyline for decades, and nowadays provides a striking visual comparison between historical and modern Poland – sitting in between increasing numbers of sleek, silver skyscrapers. Containing theaters, conference rooms and Warsaw’s highest viewing platform, the Palace provides visitors with a unique chance to experience Stalin’s visualizations of the city.
Open In Google Maps
1 plac Defilad, Śródmieście Warszawa, Mazowieckie, 00-901, Poland
+48226567600
Visit Website
Give us feedback

Museum of the Warsaw Uprising 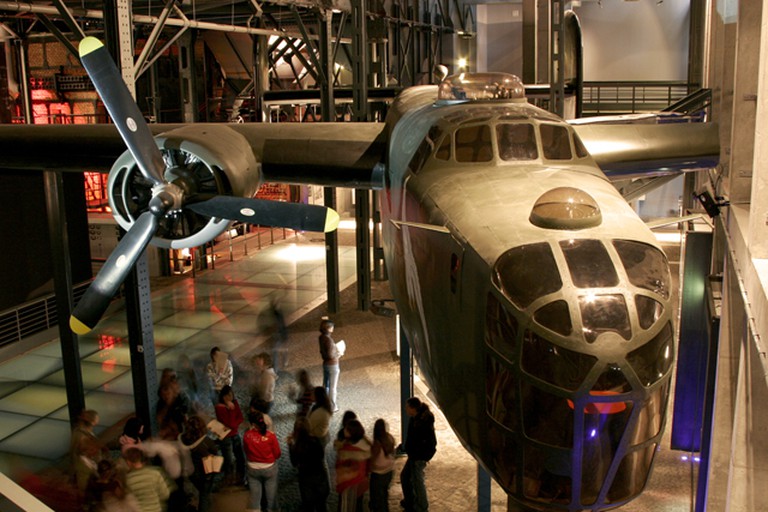 Muzeum Powstania Warszawskiego | © Julia Sielicka-Jastrzębska/WikiCommons
Book Now
Few incidents in Warsaw’s long and sometimes bleak history have been of such paramount importance to the city’s character as the Warsaw Uprising; an attempt to liberate the city from Nazi occupiers, which began on 1st August 1944 and lasted 63 days. Nowadays, the modern, state-of-the-art Warsaw Uprising Museum details this most daring struggle in an attempt to bring history to the younger generations. Visually impressive, with full-sized fighter planes and recreations of underground tunnels, the museum uses striking displays, booming sounds and extensive information in both Polish and English to provide visitors with an immersive and educational experience.
Open In Google Maps
79 Grzybowska, Wola Warszawa, Mazowieckie, 00-844, Poland
+48225397905
Visit Website
Give us feedback

Plac Zamkowy and the Royal Castle

Most histories of Warsaw tend to focus on the 20th century – and rightly so, considering how drastically those events shaped the city that’s seen today. However, areas such as Plac Zamkowy (Castle Square) and the Royal Castle perfectly depict Warsaw’s era as a flourishing 17th century capital. Although the area, along with most of the Old Town, was almost entirely destroyed during World War II, it was rebuilt virtually brick-for-brick in its earlier style, thus still offering a gateway to the past. The Royal Castle is teeming with lavish décor and paintings of famous Poles, and provides visitors with an insight into the time when Poland was still a monarchy. The square outside showcases Warsaw at its most beautiful, and nowadays is also a popular meeting spot full of restaurants and cafés.

Although virtually nothing remains of the Warsaw ghetto after its bombing during the 1943 Ghetto Uprising, a visit to the area that it once stood on is nevertheless a poignant experience. The recently opened Museum of the History of Polish Jews is a modern, striking centerpiece to the former ghetto, and just outside it is the Monument to the Ghetto Heroes, commemorating those who fell in the 1943 uprising. Now a predominantly residential area, tell-tale signs of the district’s tragic history can be found everywhere: the stone monument to Umschlagplatz – the square on which Jews were loaded onto vehicles transporting them to death camps – and a secluded grave for the fallen uprising fighters, are two important examples.

There are numerous monuments to the Warsaw Uprising dotted across the city, but the most famous and perhaps the most impressive is the one located on Krasiński Square, just next to the ultra-modern Supreme Court. Larger-than-life-sized figures seem to be coming up out of the ground in this monument – dedicated to those who fought and fell during the attempt to liberate the city. Other monuments, such as the chilling child-sized statue commemorating the children who fought and died in the uprising, located on Podwale Street, are also definitely worth visiting. 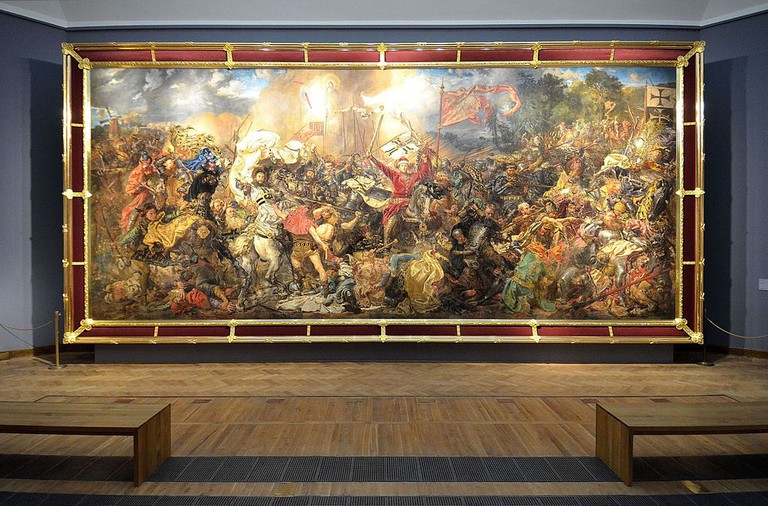 The Battle of Grunwald by Jan Matejko at the National Museum in Warsaw | © Adrian Grycuk/WikiCommons
A National Museum is a staple for learning about the history of any country, and Poland’s museum, located in Warsaw, is no exception. Primarily a collection of art, the National Museum in Warsaw is one of the oldest art museums in the country, showcasing Polish and international works ranging from the Middle Ages to the present day. Particularly worth a visit is the painting The Battle of Grunwald by Jan Matejko. Almost 10 metres wide, the painting takes up a whole wall, looming down imposingly on visitors, and is undoubtedly one of the most famous in Polish history.
Open In Google Maps
3 Aleje Jerozolimskie, Śródmieście Warszawa, Mazowieckie, 00-495, Poland
+48226211031
Visit Website
Give us feedback

Book Now
A 17th century royal residence commissioned by King Jan III, Wilanów is undoubtedly one of Warsaw’s most splendid historical attractions. The glorious palace, nicknamed Poland’s version of Versailles by some, is full of lavishly decorated rooms depicting noble life as it once was, as well as a museum complete with the portraits of all the kings of Poland. The vast gardens surrounding the palace allow visitors to escape the bustling hub of the city and reflect on how life once was for those who were privileged enough to live in this most beautiful of homes.
Open In Google Maps
10/16 Stanisława Kostki Potockiego, Wilanów Warszawa, Mazowieckie, 02-958, Poland
+48225442700
Visit Website
Give us feedback 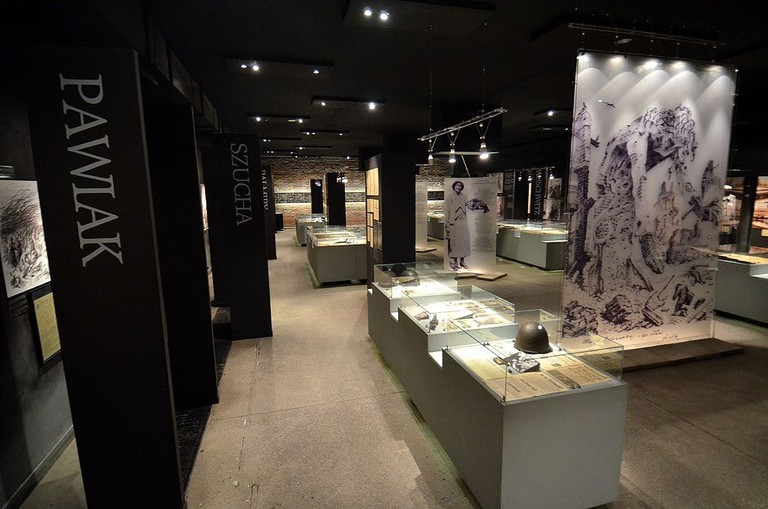 Museum Pawiak | © Adrian Grycuk / WikiCommons
Pawiak is yet another chilling testimony to one of the darkest chapters in Warsaw’s history. Formerly a prison that was most significantly used by the Nazi occupiers to imprison and even execute Poles, the site of Pawiak now houses a small museum. Only a few remnants of the original prison remain after it was blown up in 1944, however, reconstructions inside the new building give just a taste of what life was like for the inmates. A visit to Pawiak is a haunting experience, allowing present day tourists to understand the tragedies that occurred on the site not so long ago.
Open In Google Maps
24/26 Ulica Dzielna, Warsaw, 00-001, Poland
+48228319289
Visit Website
Give us feedback

The Tomb of the Unknown Soldier

Situated on the far side of a vast, paved square on which speakers as famous as Pope John Paul II have spoken, Warsaw’s Tomb of the Unknown Soldier, erected after World War I, is a monument to the unidentified Polish soldiers who fell during numerous wars. The curious shape of the monument is due to the tomb being located in the only surviving fragment of what was once a grand palace, which was destroyed during World War II. A poignant place, the tomb is perpetually guarded by soldiers, and is the place where Poles and foreigners alike come to pay their respects to the fallen.

Park
Facebook
Email
Twitter
Pinterest
Copy link
Share
Map View
This modernist sculpture is one of the most famous dedicated to the composer Fryderyk Chopin in the entire world. Although a controversial design, the monument was finally unveiled in 1926, only to be blown up by the Germans in 1940, who believed that it was a powerful symbol of the strong Polish spirit. This spirit was indeed proven after the war, when the sculpture was rebuilt in its entirety. Nowadays, the sculpture takes prime position beside a lake in Warsaw’s most famous park, the Łazienki Królewskie (the Royal Baths), and visitors can hear Chopin’s music being played next to the statue on every Sunday in summer.
Open In Google Maps
Aleje Ujazdowskie, Śródmieście Warszawa, Mazowieckie, 00-001, Poland
+48504243783
Visit Website
Give us feedback
Give us feedback