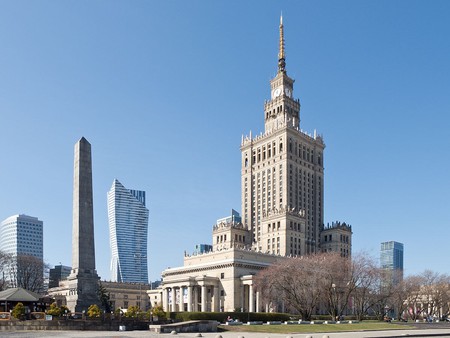 Warsaw’s iconic Palace of Culture and Science is one of the city’s most famous buildings. It has had many nicknames throughout the years, including ‘Peking’ (as PKIN is the acronym in Polish for Palac Kultury i Nauki) and ‘Nightmare dream of a drunken pastry cook’, coined by Polish poet and soldier Władysław Broniewski. Here are ten other interesting facts you probably didn’t know about Warsaw’s most famous landmark.

Built back in the 1950s and given to the Polish people as a ‘present’ from Stalin, it has a similar design to the famous seven towers of Moscow. However, many Warszawians have a divided opinion on it. Some love it, as it’s a beautiful building and part of the city’s rebirth following the 1944 Uprising. Others hate it, as it reminds them of the Communist times, when the country was part of the Eastern Bloc. Whether you love or hate it, there is no doubt that this is an important building that dominates the city’s skyline.

There are four mermaids on the clock

The clock has four faces (one on each side of the palace) and was only placed here on New Year’s Eve in 1999 to celebrate the new millennium. At the time, this four-sided clock at the top of PKiN was the second biggest clock in Europe. All four sides of the clock feature the symbol of Warsaw – the mermaid, known locally as the syrenka. 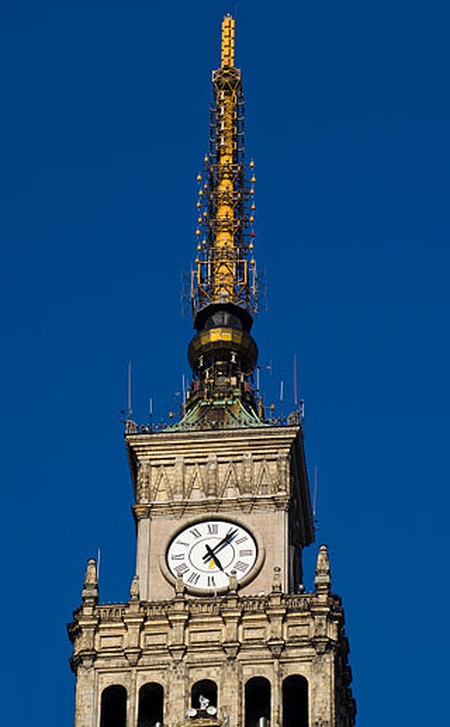 There are over ten licensed bars in the building

While this was certainly not a building designed for pubs, bars, cafés and parties, there are currently over ten licensed bars in the building, and this number is growing. As well as many ground floor bars and even a nightclub, there are licensed cafés, and the cinema bars also serve alcohol. However, the most impressive place to have a beer in the building is on the 30th-floor viewing terrace, which you can reach in 19 seconds via the lift.

Cats ‘work’ here to rid the palace of mice and rats

One of the little-known facts about the building is that the lower floors attract mice and rats. However, to combat this, many cats work in the lower levels of the building, and in the basement. This ensures the building is kept relatively free from rodents and the spread of diseases.

It is the sixth tallest building in the European Union

While the Palace of Culture and Science towers significantly and noticeably over the Warsaw skyline, it is not just one of the tallest buildings in Poland. At the time of construction, it was the world’s highest tower clock. As of August 2018, the Palace of Culture and Science is the sixth tallest building in the European Union. It sits at a height of 237 metres (778 feet) above ground level. When the United Kingdom leaves the European Union in 2019, it will move into the top five tallest buildings in the EU, when the Shard drops off the list. 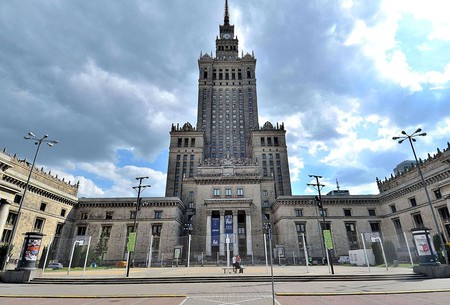 It’s not just the height of the building that impresses. The Palace of Culture and Science contains 3,288 rooms. Some remain empty, while others are used only for special events. The rooms consist of over 100 toilets, many offices, move theatres, bars, grand halls, conference rooms and all kinds of large meeting rooms such as the Sala Warszawa. The largest room is the main 2,897-seat auditorium, which is used for big events. 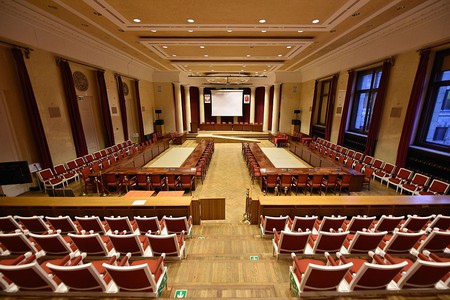 There is a sports arena inside

On top of multi-screen cinemas, theatres, bars, nightclub and museums, there is a large sports arena inside. The palace’s ‘Youth Centre’ (Pałac Młodzieży) is frequented by Polish schoolchildren. Here, you can go swimming, play basketball, dance and work out in the gym.

The Congress Hall held the final of Miss World 2006

Back in 2006, Warsaw famously hosted Miss World here. It was the 56th edition of Miss World and took place on September 30, 2006 at the Congress Hall (Sala Kongresowa). It was the first time ever that the pageant was held in continental Europe in a European city other than London. There wasn’t to be Polish success for Marzena Cieślik, however, as Czech model Taťána Kuchařová was crowned Miss World 2006. 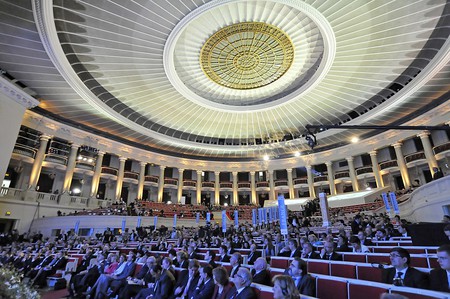 The Congress Hall where Miss World was held | © europeanpeoplesparty / WikiCommons

David Bowie features on a mural with this building

English singer David Bowie famously visited Warsaw back in 1973. He later wrote a song called ‘Warszawa’, which was based on his experience of a city that was, at the time, a rather grim and desolate city. However, the song was meant to be an optimistic ballad, and indeed Polish people came to love it. So much so that there is now a mural nearby that features both an image of David Bowie with the Palace of Culture and Science also on it. Bowie was inspired to write the song’s melody based on a vinyl record he bought in Warsaw that contained a folk song called ‘Helokanie’, written by a Polish folk choir band called Śląsk. 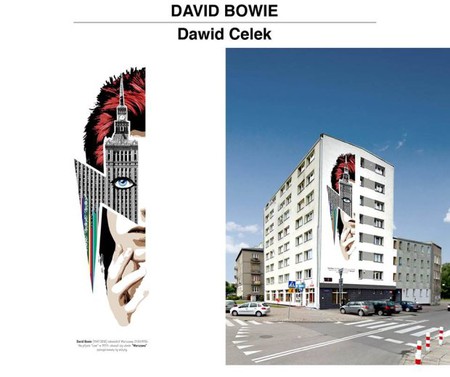 Although the building has no long–term human residents, several kinds of animals live here. As well as the aforementioned cats who fight the mice, the upper floors have had pigeon’s nests since 1998, with kestrels (part of the falcon family) also presently residing in the building. Perhaps most surprisingly, on the sixth floor, there is a living bee apiary, which was established among bushes within the building. Mr Wiktor Jędrzejewski from Warsaw’s City Bees Association takes care of these bees, ensuring they are kept under control.

The tiles on the front walls came from the Soviet Union

The tiles that surround the entire building came all the way from the Ural Mountains in the former Soviet Union, now Russia. They were made there in a factory before being transported over 3,500 kilometres here to Warsaw. The exact number of tiles used is not known, but what is known is that 7,500 workers built the building on the demand of Joseph Stalin. Of these workers, 3,500 were from Soviet Union countries, and 4,000 were Polish.