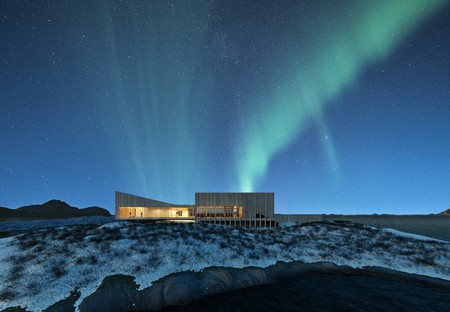 Norway’s not short of breathtaking archipelagos. And while both the Svalbard and the Lofoten islands are fan favorites, it is the lesser-known, western Norway archipelago of Vega that has actually acquired UNESCO World Heritage status. Soon, Vega will also have a brand new World Heritage Visitor Center. Here’s what you need to know about this project, due to be completed next year.

A gem off the beaten track

Helgeland is the southernmost part of northern Norway, the only part that is below the Arctic Circle. There, in an area of 1,037 square kilometers, you will find the Vega archipelago – comprising 6,500 islands, reefs and skerries. The archipelago has been home to fishermen since the medieval times who mostly live on Vega, the main island. And if you’re wondering why a whole archipelago has been awarded a ‘UNESCO World Heritage Site status‘, let’s just say the nature here is simply majestic. Think different undertones of blue, from the turquoise of the shallow coves to the indigo depths of the Norwegian Sea, interrupted by the white sandy beaches, the earthy tones of steep mountains and the many different bird species flying around the area.

That beauty is precisely what the new World Heritage Center aims to capture and showcase. When built, on the northern shore of Vega island, the center will function as a local gathering point to educate people on the natural environment of the archipelago and all the different species that call it home. Due to open in spring 2019, the Center will also act as an information point for World Heritage Sites in general.

The World Heritage Visitor Center, the first of its kind to be built in Norway, has been some time in the making. Although there was an (open, international) architectural competition in 2008 and the Oslo-based architecture firm Ekberg Lous Arkitekter won the project, construction was halted due to funding issues. Then, seven years later, the green light was given for work on the project to start once again, at a new site this time.

The idea was to create an environmentally friendly building made from a natural material that looks both modern but also allows you to slow down and take in the nature that surrounds you. The experience will start at the parking area, where you will have to cross a natural canal via a footpath in order to reach the Center – a literal and metaphorical gateway to the natural and cultural heritage that awaits. Inside the building, there will be a wing dedicated to exhibitions, an office wing and a café, enveloping a closed courtyard. All the materials will be natural: ore-pine for the façades and roofs, light wood panels of pine and birch-veneer on the ceilings. According to the architects, “the materials are in dialogue with the vernacular architecture, the surrounding landscape and the local climate. The building makes up its own distinct identity without shouting for attention.”

When the World Heritage Visitor Center opens in spring 2019, it won’t have to do any shouting for attention. Its presence in such a beautiful and important spot, will most likely be enough. 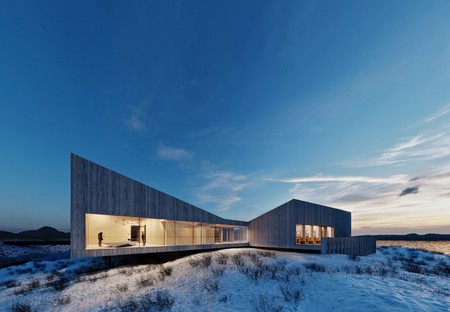 The Centre will be open in 2019 | © Ekberg Lous Architects, visualizations by AZR Studio
Give us feedback