World’s Most Environmentally Friendly Hotel Is Being Built in Norway 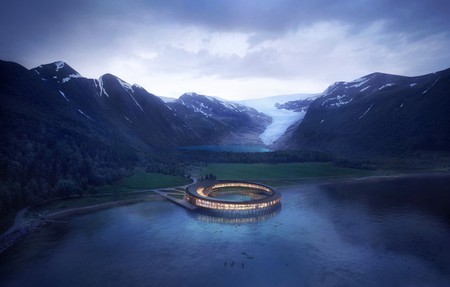 Imagine a world where buildings don’t harm or disrupt nature in any way. Where new structures, instead, become part of the ecosystem and reduce their footprint every year to the point that they generate their own, sustainable, energy. Well, you won’t have to imagine for long: the masterminds behind Under, Europe’s first underwater restaurant, are now working towards the world’s first energy positive hotel above the Arctic Circle.

Snøhetta, the Oslo based architecture firm behind various iconic structures in Norway and beyond (the Oslo Opera House and the reconstruction of the Times Square to name a few), is at it again. This time with Svart, a miracle of modern architecture at the foot of Norway’s second largest glacier, Svartisen. Svart (named after the glacier it will be neighbouring) will be a hotel unlike others: the first building in a Northern climate to be built according to the Powerhouse standard, this hotel not only will be reducing its energy consumption by 85 percent every year (compared to standard, modern hotels), but it will also produce its own energy.

According to Snøhetta’s founding partners, when you build in an environment as beautiful as this, you have a responsibility to preserve the natural beauty, as well as the flora and fauna of the area. There’s the rare plant species, the blue ice of the glacier and the clear waters of the Holand fjord to consider, so the only solution really was to create an energy-positive and low-impact building that will not disrupt the ecosystem but will help further position the location a sustainable tourist destination. 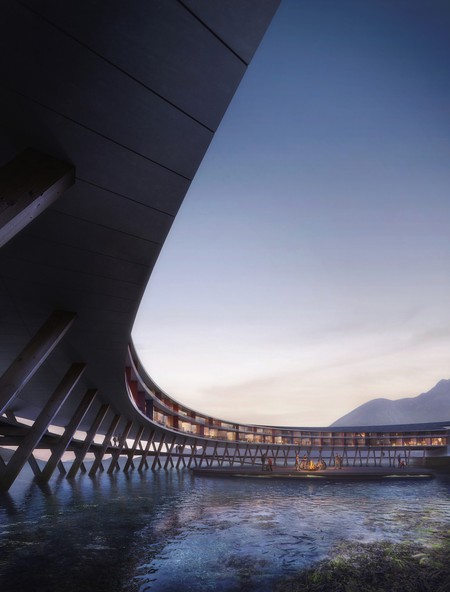 The perfect place to meet the Midnight Sun | © Snøhetta/Plompmozes, Courtesy of Snøhetta

The shape of things

Svart is shaped like a ring that extends from the shoreline into the waters of the fjord — providing both panoramic view and the sense that you’re actually a part of the scenery. It’s elevated several metres from the fjord’s surface with the help of weather resistant wooden poles that make sure that the fish can still swim undisturbed beneath it. The hotel is inspired by coastal building traditions of the locals in the old times: the fiskehjell, a wooden, A-shaped drying rack for fish (a shape that also inspired Norway’s first slow, nomadic festival) and the rorbue, a fisherman’s seasonal house that’s also elevated from the waters. 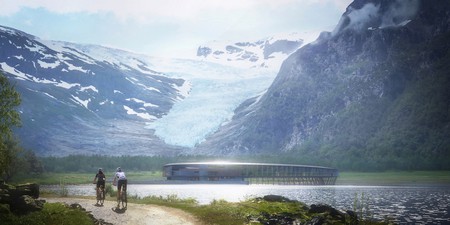 View of the hotel and glacier | © Snøhetta/Plompmozes, Courtesy of Snøhetta

But what is a Powerhouse standard, and how does a building achieve it? Powerhouse is actually a term coined by a team which specialises in creating energy producing buildings, or ‘plus houses’ — buildings that in 60 years from now will generate more renewable energy than the amount of energy required to build them, sustain and demolish them. The team, composed of Snøhetta, Entra, Skanska, the ZERO Emission Resource Organization and Asplan Viak, have already produced several Powerhouses, many of them in Norway — but Svart is the first one so high up North.

To pull it off, the architects studied how the rays of the sun change throughout the day and the year — and strategically placed each of the hotel’s elements (the rooms, the restaurants and the terraces) so that they absorb the maximum of solar energy. To that purpose, the roof of Svart is equipped with solar panels, produced with clean, hydro energy that helps reducing even further the hotel’s carbon footprint. There are also geothermal wells, connected to heat pumps, that are used to heat the building during the significantly cold winter months. 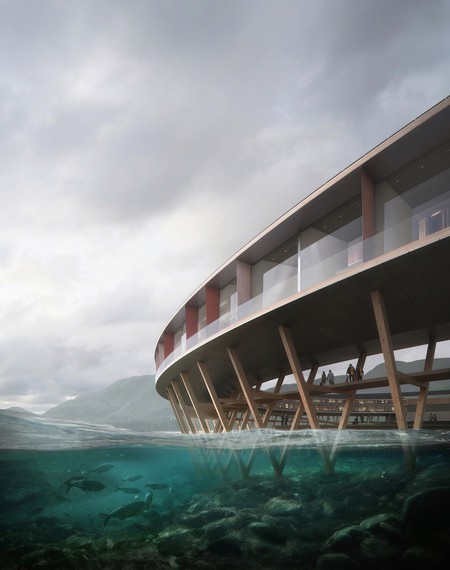 The hotel will be part of the ecosystem | © Snøhetta/Plompmozes, Courtesy of Snøhetta

The hotel is scheduled to be completed by 2021, and there are plans to introduce an energy neutral boat shuttle from Bodø to Svart. Until then, you can spend some time gawking at the images on Svart’s website, also designed by Snøhetta.